If you’re reading this, you probably saw this guide and said “Wh- Rowboat? Are you serious, OP? Is this a meme guide?” to which I reply “Well, kinda?”


The rowboat is simultaneously the most boring, exciting, easy-going, and dangerous vessel to sail in.

Your humble vessel is both the hardest to detect, and the easiest to sink, making it the ultimate weapon in stealth-based piracy, allowing for quiet getaways, easy infiltration, and lots of strong tucking opportunities. Or, if PvP isn’t really your strong suit and you’re not afraid of early onset carpal tunnel syndrome, rowboating allows for perhaps the most peaceful method of finishing quests, or just beachcombing for those ever-so-rare barnacled chests.

Let’s start by highlighting the pros and cons, and then go into specifics.

YOU AND YOUR VESSEL: How to find and use a rowboat

So you’ve booted into the game, you’ve found a server, and you wake from your grog-induced stupor at a tavern, or if you’re out of luck, an island somewhere. Let’s go over the steps to obtaining your rowboat.


Step one: Stock up

Fill your pockets with the best provisions you can find. Given that you’ll only have what you can carry on you when you drop into the rowboat unless you’re a fanatic that overstocks everything, don’t sweat grabbing too much.Try to find some curseballs, and food that’s at least better than coconuts. Remember, the order of food goes Worms < Bananas < Coconuts < Pomegranates < Mangoes < Pineapples < Cooked food.

For firebombs and Blunderbombs I like to do a 4:1 split, carrying a single Blunderbomb for emergencies. As you will likely lack the resources to sink ships, and Blunderbombs inflict damage to rowboats, it’s smarter to carry firebombs so that if the need comes you can board, slay, set fires, and wait out the fire.

Got all that? Alright, let’s sail.

Sail from island to island until you find a rowboat. Don’t forget to orbit around larger islands to ensure you haven’t missed one. This is both the easiest and hardest stage, as RNG is a spiteful mistress. Just keep going until you find one.


Step three: Get to rowing

Found one? Good. If you have a voyage planned, put it down and get to work. If you don’t, time to start wandering until you find something interesting on an island. You can pilot your dinghy by pressing A and D to control your oars. Try to press and release them at the same time so that you don’t veer off to one direction. If you need to turn suddenly or slow down, Q and E will brake on the respective oars, allowing for a semi-smooth handbrake turn.


Step four: Getting the essentials

Once you’re properly acclimated, your rowboat should look a bit like this: 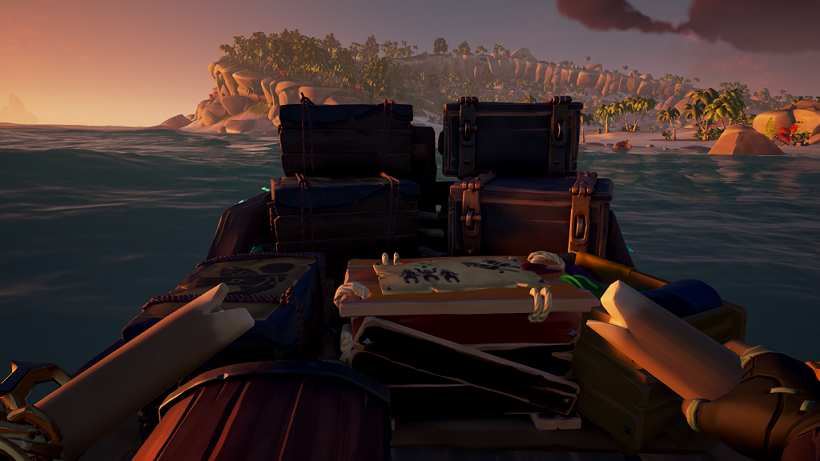 Speaking of which, let’s talk about rowboat types.

TO ARMS: Types of rowboats

All rowboats have some things that are constant between rowboats. They are:

Everything else is up to your own ability. 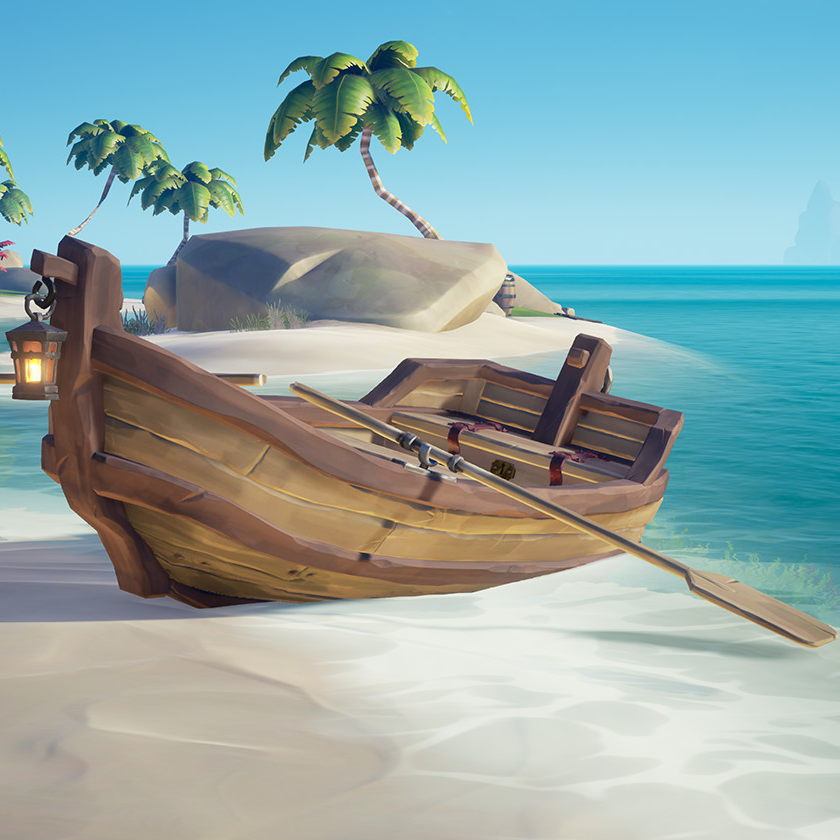 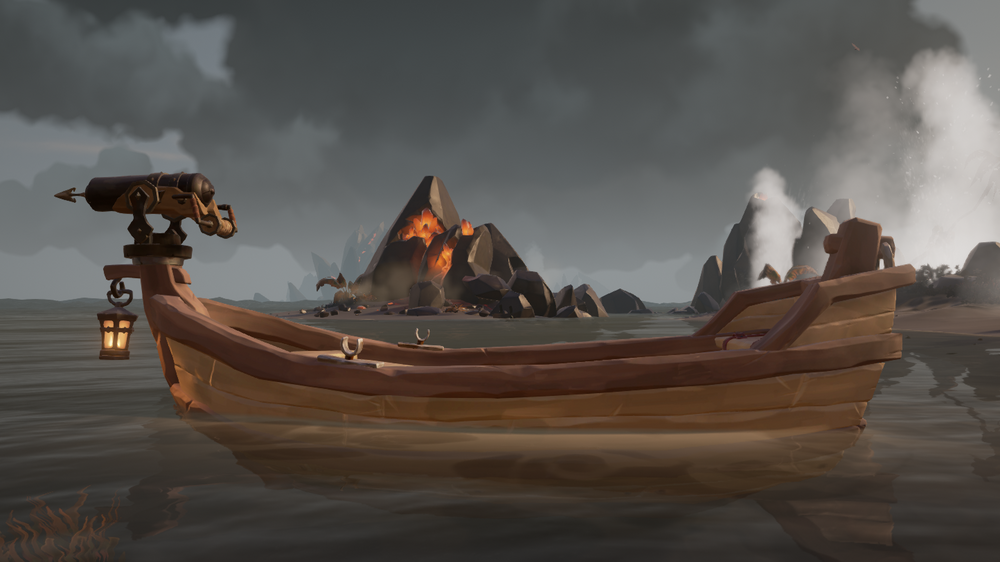 Not a bad option, honestly! The extra manoeuvrability allows for some easy sea-to-land-to-sea movement by means of the harpoon and holding down Right Click, if you’re really desperate. Bear in mind that dragging your rowboat across the ground may damage it, which you may not want to do.

The Cannon Rowbat: AKA The PVE Cheeser 5000 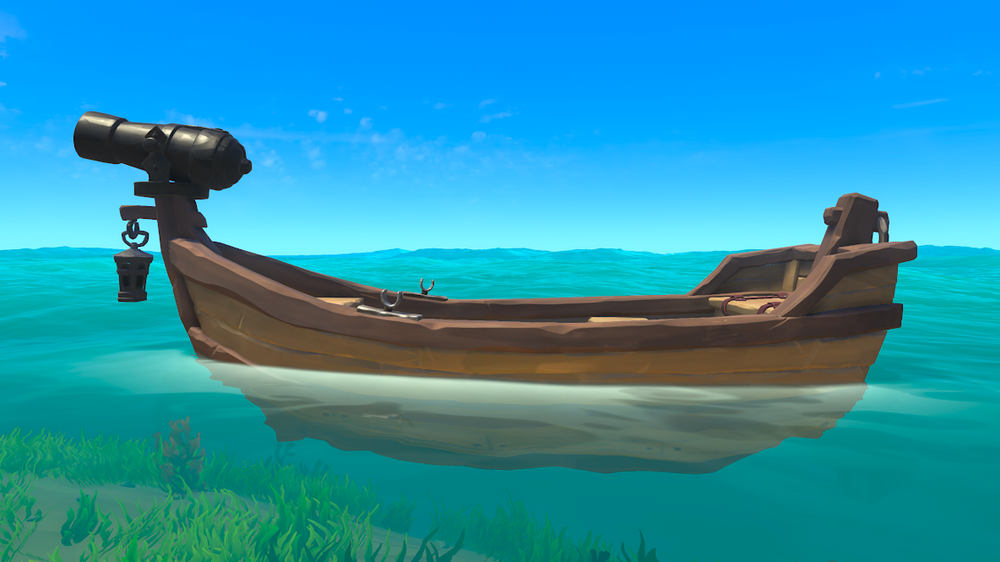 This bad boy can deal with so many problems that you didn’t even know you had. Skeletons? Outta my sight. Ocean crawlers? See ya, loser! Player ships? They’ll never see you coming! Just don’t stand still.

Alright, let’s talk about the main drawback of the cannon rowboat. Unlike its unarmed brethren, the cannon rowboat can be targeted and shot at by skeleton ships, skeletons on island cannons, and ghost ships. This wouldn’t be too much of a hassle if it wasn’t for the fact that skeleton ships can turn on a dime, and ghost ships are never alone, and fire faster than your last open crew galleon on meth. I’m not saying you should not attack them, but if you do: Good luck. Seriously, good luck. The only tip I can give is that your humble vessel can only take 4 to 5 hits max, and NPC ships will stop targeting you if you simply jump off the cannon rowboat.

That’s it folks. Enjoy getting mad and losing everything many times over.

Here’s some various tidbits and things you might want to know:

That’s all for today. Good luck and good sailing, pirates!

Here we come to an end for Sea of Thieves Rowboat Gameplay Tips + Pros and Cons hope you enjoy it. If you think we forget something to include or we should make an update to the post let us know via comment, and we will fix it asap! Thanks and have a great day!