If the original Satisfactory Experience has grown repetitive or stale, here are some mods to install to revamp the whole experience and How to Install and Set them Up including Mod Managers.

How to Install Satisfactory Mod Manager

First, if you have been using the Epic SML you will be prompted to download and run the SMM, after it should update automatically. If not, you will need to find the download link for the SMM. Currently it can be found in the mods section(1) on ficsit.app it is located above the mods(2). Although we can expect it to eventually be moved to its own section of the site.

Once installed, open the Satisfactory Mod Manager. It may take a few minutes to run initially. At this point, SML users will be asked to uninstall the SML which will be done automatically by the Mod Manager.

You have now completed the installation. 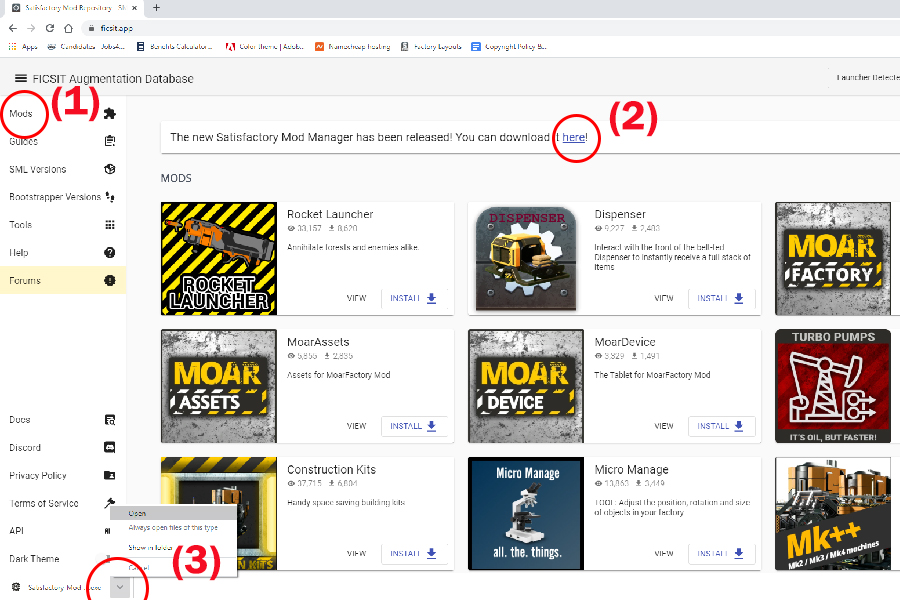 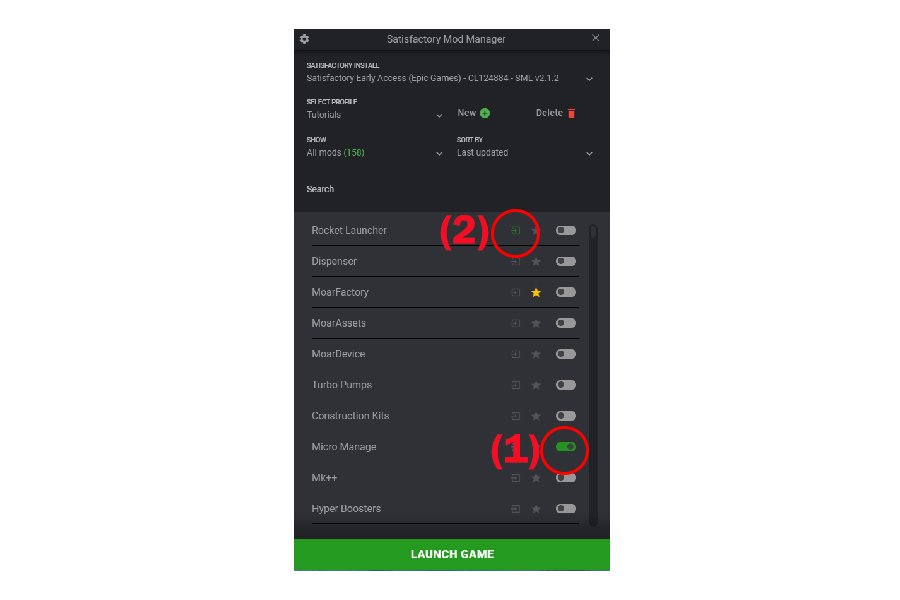 Upon opening the SMM the mods will be listed underneath the search parameters and game profiles. You can activate mods by clicking the little slider(1). As of the time of writing, there are over 114 compatible mods available to choose from. As various mods are updated, you can expect this to rise, so to give you a breakdown of those mods you can click the individual mod, or the window panel(2). This will open up a description of the mod. Failing that, I spotlight mods on my youtube channel, adding new shocases weekly, allowing you to see them in action.

We have just covered how to install, activate mods and run the game from the launcher. Now let’s look at further options available.

A Note on Profiles

Currently the Manager has Modded, Development and Vanilla options available under profiles. Note that Vanilla disables mods in game. More importantly there is the add “new” feature. This allows you to create custom profiles. This is great if you run several games, with different mods enabled, for example in my tutorial series, I can have a creative mode style mod, such as PAK Utility saved under a “Tutorial” profile. I can also create a new profile for my modded livestream series, which covers mods that add playability through new structures and items, like Moarfactory or Refined Power.

If you have friends that wish to also use the same modded setup that you use, you can export your profile by going to the settings cog in the top right hand corner then, under profiles, select export. Once your friend has the mod file, they can then use import to add the profile directly to their Manager.

In the settings cog you can choose the update settings, naturally this is set to on launch, however if you wish this can be done leaving the app, after your session. Or only updated after being notified and asked to proceed. 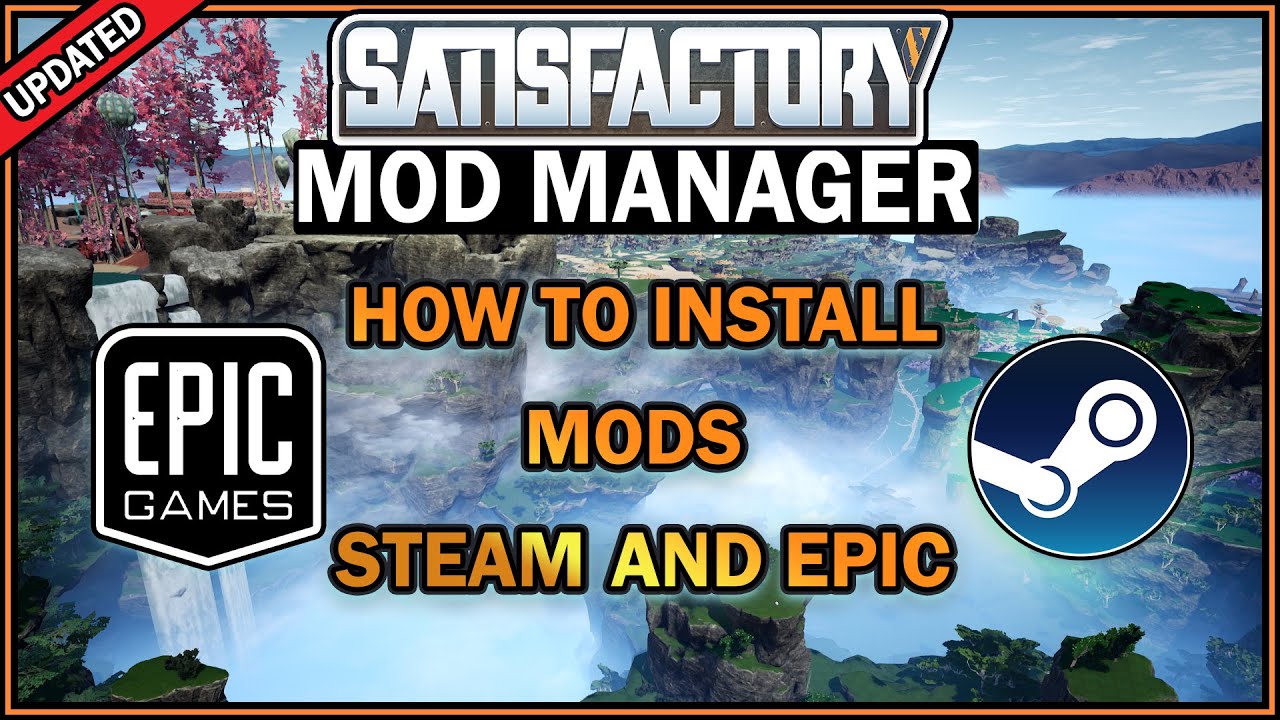 Working on building a factory can be a ton of work and it may get even more frustrating for some if they are trying to work while it is nighttime in the game. Luckily, there is a simple modification out there that allows players to make their world be in permanent daylight.

With the “Permaday” mod, players are given a few new commands to control the daylight cycle. This includes setting the day at a specific hour, adjust the overall speed of the day, and adjusting the individual time that day and night exist in the world.

The factories themselves can be beautiful by themselves, and sometimes they just aren’t. To help with this, mods like the “Decoration” mod come in handy. Decoration does something unique as it doesn’t actually add anything new to the game. Instead, it pulls different natural flora players can find in the game and allows the player to place them around the factory.

This means that 86 different trees, 84 different rocks, and 40 different corals have been made available to decorate the exterior of the factory to make it feel more one with the environment.

Those looking for more pipes to use and a packaging plant that isn’t as costly should look no further than the “Fluid Extras” mod. The eight mods that are added in this pack are not so much new in terms of use but they have a unique look that can improve the aesthetic of a factory.

On top of this, two super helpful elements that are being worked on for the mod are the Mini Water Extractor and the A.I. Fluid Packer. The water extractor can fit into small amounts of water and can greatly reduce power. The fluid packer is still being worked on but will simplify the packaging workflow.

Moving around the map can be a bit time-consuming and tedious, especially when trying to get a task done as soon as possible. Something that could help is a device that can teleport the player around. In the “Teleporter” mod, players will unlock the ability to make a teleporter once they reach tier five.

When placing a teleporter, players will be prompted to give the teleporter a name. This is to help identify it when using another teleporter to try to get to it. It’s important to note that the mod is not functional in multiplayer.

Despite the focus on building factories in the game, there is a combat system implemented into Satisfactory that can reap some nice rewards supply-wise. With the various monsters lurking around the player, it’s easy for some to feel like they can’t just focus on the fun of the sandbox gameplay.

The “Passive Mode” mod completely gets rid of all of the monsters in the game as well as removes the toxic gas that exists near some of the plants and rocks. This is the perfect mod for those that just want some peace while creating factories.

When handling a ton of different items in the game, it’s nice to have places where they can be stored. It can be even more helpful if these storage containers were able to quickly cause a transaction between them and the player.

With the Item Dispenser and Item Hopper mods, two new devices are added to the game that will help players manage this. The hopper will immediately take items out of the player’s inventory and place them immediately onto a conveyor belt. Contrastly, the dispenser will take items that are placed in and automatically give them to the player.

Some mods are known for making games much more flexible and even more accessible to people and the “Pak Utility Mod” is no exception to this. The add-on gives players a ton of commands that can help the player see their factory from different perspectives but also allows them to experience the game in different ways.

Its primary command is “!fly” which allows players to take flight as they get an overhead look of their factory. There are also commands for keeping the player immune, unlocking all research, and getting rid of building costs. In other words, these are cheats.

From the creator of the Decorations mod that it may pair well with. The “Floor Hole and Ceiling Logistics” mod looks at the problems that Satisfactory has with being able to connect devices through various structures and makes it a lot easier to pull off.

Things like a Conveyor Hole that can move items up and down and a Pipe Hole that ranges in sizes makes it possible to surrounding the building with machines in a lot more compact way. Those production lines that take up a wide amount of area could be a thing of the past.

The open world is fun to navigate, but finding the way back home could be difficult. Why not have a map open at all times as the journey happens? In the “Minimap” mod, players can take full advantage of the world map while moving around the environment.

Once activated in the game’s UI setting, players can press M to toggle it on and off. From there, players can drag the minimap anywhere they want it on the screen. Players can also use it to zoom in on specific areas of the map.

At the end of the day, players just want their factories to run at peak performances and be as productive as possible. The only issue is that the base game of Satisfactory doesn’t give players a direct way to know whether or not their operation is doing well or not outside of giving it an eye test.

With the “Efficiency Checker Mod,” a good amount of buildings are added with each being able to measure a different phase of the production line. These buildings will give players a general idea of how effective the factory is and if there is a risk of underflowing.

This adds machines called the Itemthrottles that change the number of items that should pass through by minute, allowing for a more even production line that doesn’t overflow. The Overflowtoggle simply checks for overflow and streamlines the movement process. The Overview Terminal controls the Itemthrottles.

Building things can be a lot of fun in Satisfactory, but it can be challenging to place certain items down considering that most of the items in the game have one default size. That’s why one of the best mods to try out is the Micro-Manage mod.

Simply put, the add-on allows players to adjust any object in the factory to a certain size and position of their liking. These objects can also be easily rotated as well, meaning that players will be able to get into the nitty-gritty of perfecting their structures.

Factories can always be more productive than they are and what can help is adding more buildings that can increase the efficiency of the overall output. That’s where the “MK++” mod comes in. The main focus of the add-on is to add additional tiers to systems that are already in the game.

Many of the types of buildings received three new variants. This includes Constructor, Refinery, Foundry, Smelter, Manufacturer, Assembler, and much more. While efficiency increases greatly with each tier, players need to be aware of the power the more efficient tiers draw.

As of the writing of this article, the “Ficsit Farming Mod” is a few months outdated but there is no indication an update won’t be coming to the mod sometime soon as the project was recently started. By installing this, players will be able to grow a variety of different crops from wheat to berries.

Here we come to an end for Satisfactory How to Install Satisfactory Mod Manager hope you enjoy it. If you think we forget something to include or we should make an update to the post let us know via comment, and we will fix it asap! Thanks and have a great day!