Learn the fundamentals of traditional roguelike survival and any start can win.

This is a tactics guide for Rogue Fable III, to help you cultivate a mentality for playing this and other traditional roguelikes using every trick in the book to turn unfair fights into fair fights. This is, notably, not a strategy guide or a build guide. It won’t tell you how you should play a specific race or cla*s. That stuff is relatively self-explanatory, and in fact fun to figure out on your own – this guide focuses on the ‘invisible’ aspects of playing a roguelike – Ways to split enemies up or neuter their ability to pelt you with attacks that you might not have even thought of and that the game will never hint at.

It is commonly said that any seed can be won in Rogue Fable III, that there are no unwinnable situations except that you make for yourself – and while I don’t know who the best RF3 player is, I know that the best ever Nethack winstreak is 61 (source – [nethackwiki.com]  ) and the best ever Dungeon Crawl Stone Soup winstreak is 62 (source – [akrasiac.org] ). They are not cheating, just playing at the highest possible level of caution, risk aversion and turn-by-turn optimization. With even a fraction of this level of discipline, you can get a win of your own.

Rule 0 of tactical roguelikes is as follows: ‘By default, it’s a mistake to walk towards an enemy’. Let’s explore various situations and tactics where this rule holds, and also the exceptions where it doesn’t.

The goal of playing a traditional roguelike is not to make the best strongest character ever, or to fulfill a playstyle fantasy, or to eventually win just by playing for long enough. The goal is to win, and to win as often as possible. There are no bonus points for getting into a dangerous situation and barely surviving – only the chance that you miscalculated and have to start over. There’s no pressure to think or play quickly – the game is turn based. There’s no reward for winning without using all your consumables or abstaining from certain strategies – save that for challenge runs if the game gets too easy. These principles lead to the following rules of thumb:

It’s a common refrain on the Discord server that the proper way to build most characters is to get 1 dex for your first SP, then enough stat for all of your talent unlocks, then dex for the rest of the game. But why would you not want to keep pumping str or int forever? There are valid reasons to do so (more DPS is great, more survivability is great) but dex offers a power unmatched by anything else in the game; free movement that regenerates very quickly. Let’s explore all of the things you can spend an SP to get.

The only question is, when to spend your SP? An argument could be made for spending at least your first SP very early (so it can regenerate), but beyond that, they should of course be spent whenever they reduce the expected amount of damage (or need to use consumables to avoid lethal damage) in the remainder of the fight, which is a matter purely of calculation and experience. Whether you use them to aggressively explode enemies, to kite enemies in a dance or save them for an emergency is a playstyle distinction and up to you to cultivate. The fact that it’s powerful like Haste or Swiftness in Dungeon Crawl Stone Soup but even more so since you can choose when it fires off and is a renewable resource is hardly a surprise.

This section is specifically for things that are less fundamental, and more specific to the way RF3 works.

There are three main ways the enemy can gain aggro (a*suming they aren’t created already aggro) – Being hit by an attack, detecting the player, or hearing a shout. The first one is trivial, so let’s clarify the other two.

(NOTE: I tried source diving for this, but the actual behaviour I observed in-game seemed to be totally different. So I rewrote it with the rules I’ve observed, but may be missing some nuance.)

Every time an enemy gets its turn, it checks if the player is within detection radius. (It displays ‘???’ if yes, ‘?’ if no.)

Detection radius is calculated as follows: 1.5 tiles (8-way adjacency) for sleeping (‘ZZZ’) enemies, 0 tiles if the player has Vanish up, 0 tiles if the enemy is in a deep sleep (Smoke Bomb). If none of those exceptions apply, it’s 7 – the player’s stealth. (Note that LoS is 7.5 tiles – so not all tiles on the edge of LoS work. Notably, 7,0 and 6,3 do.) There is an additional rule: You had to be in LoS OR in detection range on the previous turn. If that’s true and monster can detect you (‘???’), then it has a % chance to actually succeed and aggro (‘!!!’). Being closer to the monster makes it more likely, higher stealth makes it less likely, and higher level monsters are more observant, while sleeping monsters are very inobservant.

A monster that aggros via detecting you does not immediately get a turn, so this is often a preferrable way to aggro a monster. This is also why I often forego stealth mechanics in traditional roguelikes – NOT being able to wake up a monster at maximum range under my control and have it follow me around can be a disadvantage.

Here’s an example of the ‘player had to be in detection radius or LoS last turn’ mechanic. I walked to the NE and back 20 times in a row and this fire mage never woke up. But if I instead move N and back, the fire mage will have chances to wake up. 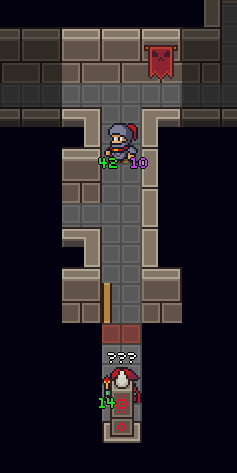 Another example: In this situation after moving east (and the enemy was NOT in my detection radius before) I got noticed in one turn. So being in LoS on the previous turn was sufficient. 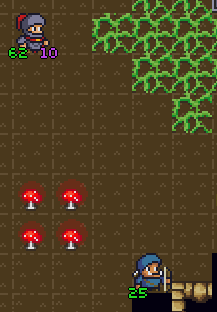 Enemies shout every turn they’re aggroed (as long as they moved or are currently visible), and also have a 50% chance to shout when they die.

Shouts aggro every enemy that is both within 6 tiles of the shout and also within 10.5 tiles of the player. (As in, both conditions have to be true.)

Asleep monsters only respond to shouts within 3 tiles (instead of 6). Deep sleep monsters (from Smoke Bomb) don’t respond to shouts at all. Shouts originating more than 7 tiles away from the player have their radius halved from 6 to 3 tiles. (The halvenings from asleep and outside 7 tiles stack.) (Note: It’s >7, not >7.5! So it’s not the same ‘as being in your LoS’. Shouts on the edge of your LoS that aren’t at 7,0 or 6,3 are halved. (Worked example: This sunflower is more than 7 tiles from me, so its shouts are halved to 3 and don’t reach the second enemy.) 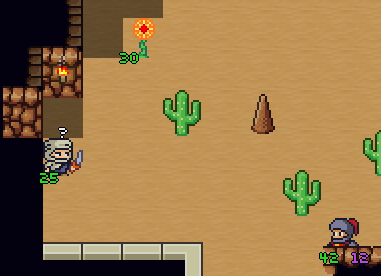 Besides the normal kinds of shout enemies make, there are some other things that are technically a shout:

Here’s a worked example. I would like to not wake up the unique. So, I should fight the other band of enemies (that DEFINITELY will notice me) without letting any of them move onto any of the red dots (where asleep monster would hear a shout within 3 tiles and wake up). If the unique was stationary rather than sleeping I’d have to keep monsters out of a much larger 6 tile radius, but I still could have gone for it. 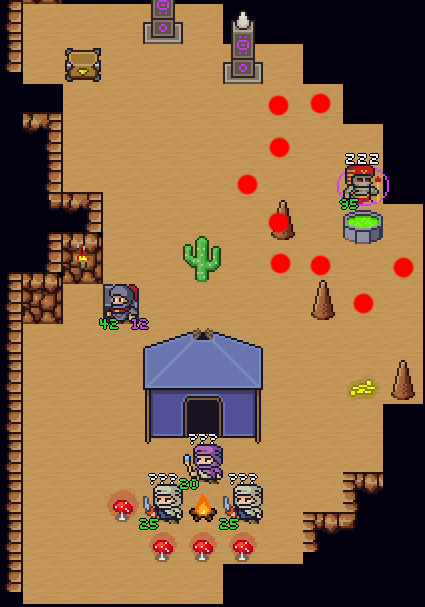 Because enemies only shout 3 tiles if they’re out of LoS, aggroing an enemy and immediately running out of LoS might cause it to not wake up its friends. That 3 tile radius is VERY small! Plus, it has to be within 10.5 tiles of my new location, too. 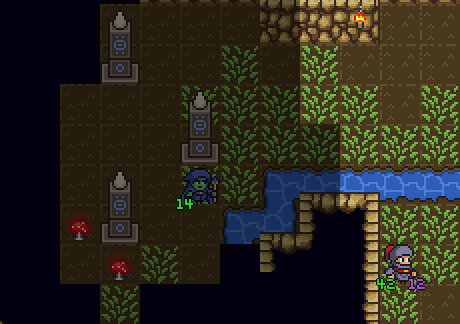 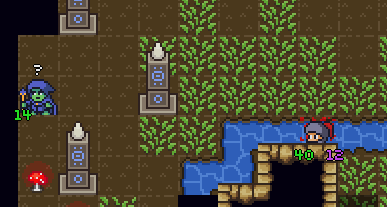 Note that enemies only shout when they move to a new tile OR if they’re visible. (This mostly matters for immobile enemies, which as a result can’t shout if you can’t see them.)

Having and Losing Aggro

Monsters that you’ve aggroed have perfect knowledge of where you are… but the same is true for you! They’ll be visible on the map and minimap unti they deaggro. Even when not in line of sight, they can be shot/targeted (even though the enemy can’t do the same back to you) and the moment they deaggro you can notice this and act accordingly.

unagroTimer goes up by 1 every turn an enemy can’t see you, plus an additional 1 if the enemy is a stationary swimmer or immobile. When it hits 20 turns, the enemy de-aggros. If it can see you, unagroTimer becomes 0 again.

An enemy that deaggros goes back to its previous behaviour – sitting still or wandering.

Some special enemies can never lose aggro once they have it: Grax The Frost Shaman, The Frost Giant King, The Kraken and its Tentacles, Expanderis The Slime King, The Efreeti Lord, Lavosa The Eel Queen. 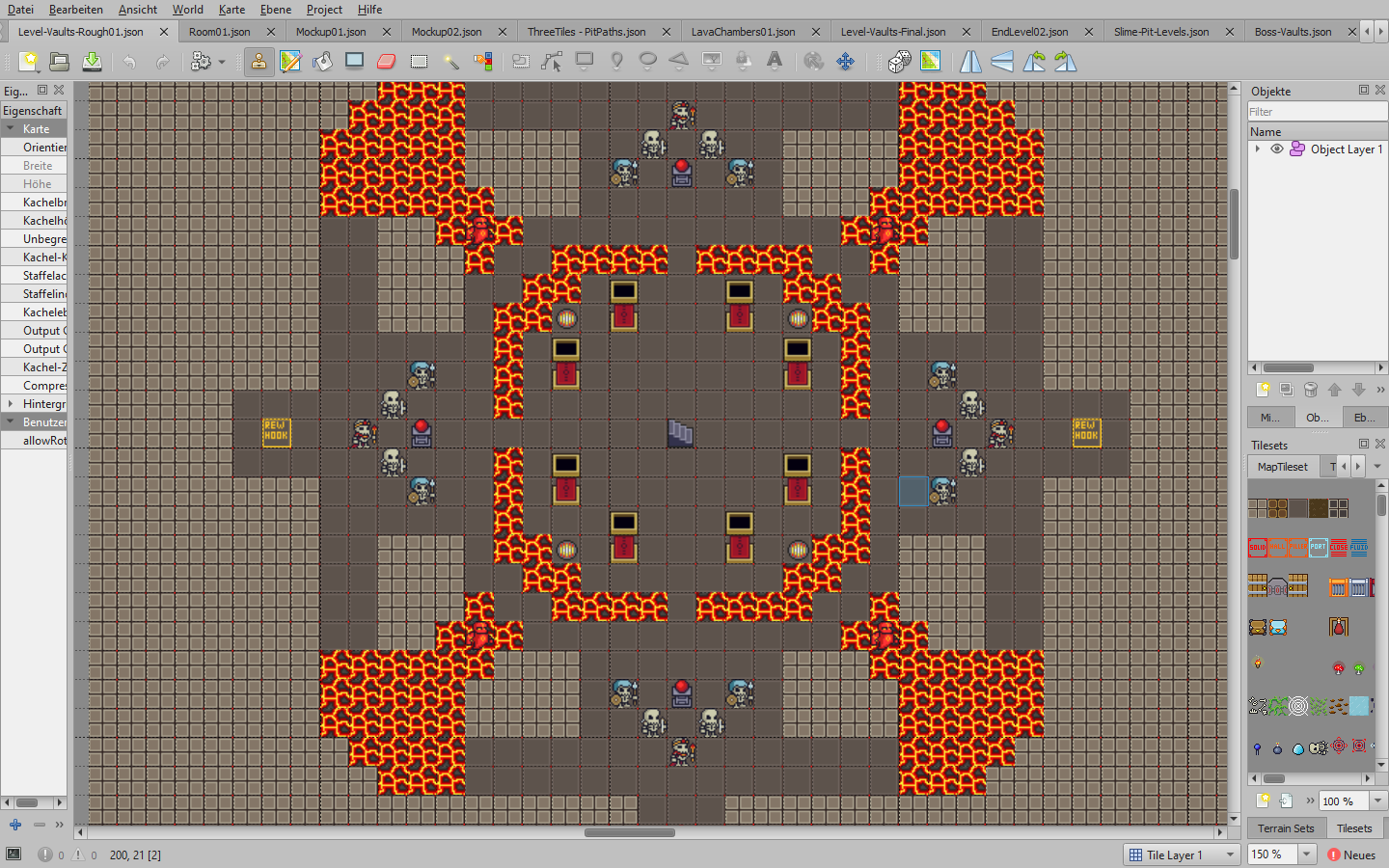 This is the floor that’s most likely to kill you even with cautious play, because how it works is very spoilery. A common death on this floor looks like this: ‘walk to a side, see some skeletons, aggro both fire elementals in the corners, start to get overwhelmed, aggro the rest of the floor, try to take the stairs, die in one turn’. Instead, do the following, which relies on a precise understanding of how aggro works: 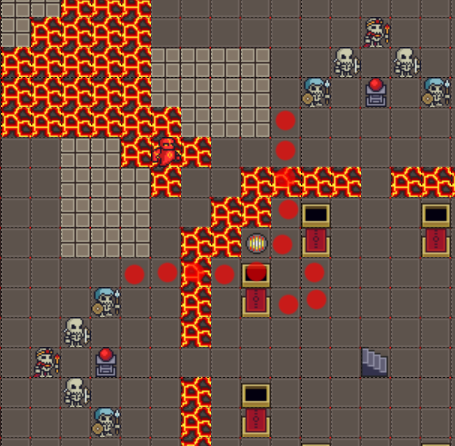 (TODO: Random595 has an idea for an alternate strat where you go north, aggro the skeleton pack, SP retreat to a specific point, and you can pick off just the skeletons. But it needs testing before I add it.)

This boss appears at the end of The Sewers branch about 50% of the time. What makes it potentially very difficult is that if you have no ranged options besides fire magic, the fact that it’s wet basically makes it impossible to kill, and you took a one way teleporter to get here. Here are some options you can consider to make the fight easier (or possible):

This section is thanks to Rethlit! (TODO: there’s so many of these LOL, I think I’ll compile them into imgur albums, and I need to ask about potential missing floors and clarify the terminology)

Even though it’s for a completely different game, DCSS and RF3 share a lot in common, both being traditional roguelikes about risk a*sessment, powerful backtracking and turning unfair fights into fair fights. A lot of the advice should feel familiar and resonant even if you’ve never played the game, so give it a look!

This is all for Rogue Fable III Useful Tips & Fundamentals of Traditional Survival Mode hope you enjoy the post. If you believe we forget or we should update the post please let us know via comment, we will try our best to fix how fast is possible! Have a great day!