This is a guide made by me, outlining all that there is to know about the Rivals AI. I also have a ranking system, based off of a mock tournament pinning CPUs against each other while I was skipping class >:)

What you’re in for.

In this guide, we’ll be going over:

-My Rivals CPU tournament 20201 trademark.
-A tier list and an alignment chart summarising the characters.
-A generalisation on how each one plays.
-Some other stuff I’m forgetting.

These aren’t in any particular order as I just got done watching an hour straight of CPUs hitting thin air and only sometimes hitting each other.

How The Rivals AI Functions?

It’s difficult to pinpoint what witchcraft they used to make the Rivals AI. Whatever it is though, it’s janky af.

Most if not all AI’s for each character play identical to each other such as Etalus, Ranno, Ori, and Maypul sharing an affinity for spamming Ustrong where it isn’t applicable or every single one of them pressing Bair to edgeguard in the absolute wrong direction. This happens for only one reason that I can think about. Spoiler alert: Zetterbum is top tier and that’s all thanks to Daniel Fornaniel making Zetterbum’s AI become the basis for almost the entire cast. That’s my theory anyway. Ori shares the same habit of pressing Dspecial when he’s in a pickle just like how Zetterbum does, but at the same time Ori doesn’t even acknowledge Sein exists.

There’s also that the AI is incredibly spammy. In my 500 hours of fighting AI because I have no friends, I have concluded that the AI sees where you are and picks the biggest possible hitbox and/or disjoint to throw out. This explains why Etalus sometimes wants to use Nspecial for absolutely no reason or how Ranno uses his tongue constantly sometimes. Recovery MUST be exempt from this for whatever reason because if I we’re right, Clairen would be spamming recovery on stage and going into helpless fall.

Now, let’s get into the meat and potatoes!

I pinned all 14 base cast members against each other specifically for this case study. I don’t know crud about competitive formats, but I set up the main bracket in a socially acceptable manner. 3 stocks, 7 minutes, best of 3, just take my word for it.

Lol, didn’t stand a chance even with best of 5.

Then, I was like: ‘Y’know what? I REALLY hate myself today and we didn’t examine enough of the losers”. So, I did a poorly put together losers bracket consisting of the 7 losers from Set 1 of the main bracket and put in the best performing loser from Set 2 of the same bracket, Ranno.

You skipped didn’t you? You’re here for the stats? I’ll give you some stats.

High tier represents characters who feel like they have different code tailored to their character or have such a straight forward, stupid game plan they can’t tell the difference (more beneficial than not). Typical Rivals AI jank still exists, but to a more bearable extent.

Low tier is where the ‘decent’ characters call home. They’re not bad by any margin, but bad habits begin to anchor the usual jank of Rivals AI down a notch.

Bottom tier is designated for character AI’s that either can’t use their gimmick against other AI’s or their character is too intricate for them to know how to play. On top of typical AI jank, the AI for these low lifers seems as if they we’re put into a role they aren’t destined to fulfil. 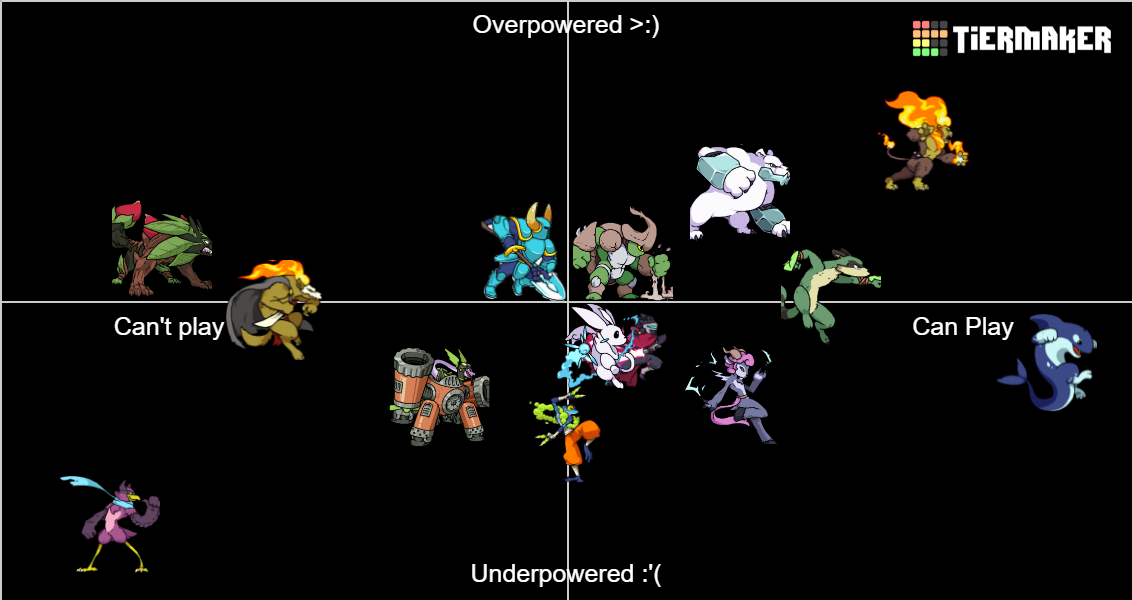 You’ll notice immediately the transparency of this chart and the previous tier list and that’s because I coughed these up in one sitting. To the left, you have your least functional characters. Top left characters have passable movesets, but the AI simply can’t make their specials work. Bottom left is similar to falling off of a skyscraper. None of your acquired attributes matter; You’re a victim to power creep gravity, now.

Now, this is just all my personal experiences of all characters in chronological order. No stats to be seen here, I’m just havin fun now.

Zetterbum Handles like a raid boss. With his fire mechanic and great fundamentals, it’s almost impossible to play with him and have him be three stocked. Feel free to prove me wrong though, by all means.

Orcane is a general nuisance. He’s one of those special cases where he seems coded specifically for the character he’s playing. Orcane AI is far more evasive and technical than most AI, but shares the same problems with them all the same. During the tournament, there was not a single moment where Orcane’s puddle wasn’t on stage and the hitbox when he teleports to it came in clutch mostly.

Wrastor is genuine hogwash. Like, I’ve been roasting this bird over the stakes and that’s because I can count the number of options he uses regularly on the five fingers of my right hand: Nspecial, Dspecial, Utilt, Fspecial, Dtilt. He doesn’t even use Nspecial for recovery mixup like he should, he just uses Uspecial. Oh, and he’ll use a strong attack once every blue moon. Can’t kill and won’t kill.

Kragg can be a menace when it counts. Living at absurdly high percents and letting out loose strong attacks are fermented into the minds of every Kragg in aether. However, he uses the same mix of Uspecial and Fspecial to recover every single time with no mixup, so that’s incredibly perdictable. Kragg also can’t land Uair consistently or any of his aerials, which he exemplified in my Mock Tournament.

Forsburn plays exactly like Zetterbum minus the initial punch. Sometimes he’ll sit there inhaling smoke for 1 of 3 of his extra abilities. Two of which didn’t mean ♥♥♥♥ to fellow AIs like the rest of his kit. Fully charged Dspecial did service Forsburn for a bit of the losers bracket, but didn’t make top cut. Along with that, Forsburn will use literally every ground move known to man in the duration it takes to lay out some short lived vape on the field so it’s cool that even if the AIs garbage, they at least wanted Forsburn to use his general mechanic in front of new players.

Maypul AI is actually pretty good. Throughout the entire tourney process, I was amazed at how she was able to recover from seemingly impossible lows. This is because Maypul AI was coded specifically to utilise the extra air she gets from her Uair as soon as she can where it’s applicable . Maypul also spams a lot of disjoints and a mix of momentum building attacks that make it tricky to get in.

Absa is an absalute (gottem) eyesore to play against. She uses her cloud and her kit, but not to it’s fullest potential. Not using the second part of her Ftilt and not holding Dspecial or Fspecial make this AI feel incomplete, but passable since she capitalises off of moves like Uair and Nspecial for edge guarding of all things.

Etalus is very well, built. I can tell they particularly coded some parts of him like holding down Uspecial and spamming Nair when he gets the chance. Though, he doesn’t use his Uair that much to secure early kills, which was a problem in Grand Finals against Zetterbum. To remedy this, he spams strong attacks like no tomorrow. Then he presses Nspecial for no ♥♥♥♥♥♥♥ reason whatsoever. Y u do dis?

Ori is decent enough. Enough to spam Dspecial at thin air apparently. Follows the same methodology as the Zetterbum AI only without Nspecial and good use of Fspecial (doesn’t hold it down). Ori did make it into Losers Finals with the help of Utilt and Ustrong combos though.

Ranno is also decent. Can’t hit sweet spots to save his life and leaves himself wide open with misplaced use of Dpsecial. All in all, Ranno has and presses Fspecial and Nspecial to keep solid distance and knows when to approach. I only wish he’d use the 3rd transformation of Uspecial and NOT spam Dspecial for no reason.

Clairen, like all sword characters throws out hitboxes and things work out. Easy accessibility like this comes with the unfortunate consequence of lowering the skill requirement for Rivals players everywhere and the Clairen AI is exemplary of that. Revealing counter wherever she sees a hitbox that isn’t hers and failing to hit tippers. Oh well, at least her entire moveset is disjointed.

Sylvanos is what you get when you mix the jank threshold that we’ve come to expect and a character seemingly made up of countless vectors. He will sometimes sit there and press Dspecial when the grass is still on cooldown and put none of his good approach options and disjoints to good use. Sylvanos is still higher than Wrastor though because unlike him, Sylvanos actually has strongs even if he refuses to use 1/3 of them.

Elliana is very much the same case a Sylvanos. Except she just kinda throws out her whole kit and expects it to work out and sometimes it does, but usually it doesn’t. In practise though, she got tossed around like a mech sized beachball in both brackets, consistently getting three stocked.

Shovel Knight might as well be on another planet. He doesn’t charge up Fspecial, sits there and collects money that doesn’t exist with Nspecial, rarely uses Dspecial and leaves himself vulnerable for an ungodly period of time when he does, and refuses to actually USE the money he collects since that’s locked behind taunt and AIs aren’t coded to taunt. He has numerous amounts of disjoints, though 😀

Don’t be like me and waste 500 hours on CPUs. Unless nobody you know plays the game anyway. Don’t take this too seriously, I’m just waiting for MapleStory to install and I wanted to kill some time. It’s done now and I heard the P2W is aggressive. Wish me luck!

Here we come to an end for Rivals of Aether CPU Tier List XL hope you enjoy it. If you think we forget something to include or we should make an update to the post let us know via comment, and we will fix it asap! Thanks and have a great day!