Are you tired of reading, tweaking and restarting? Just want to play ♥♥♥♥♥♥♥ game properly? This is what worked for me and fixed everything. NO CHOICES, UNDERSTANDING OR THINKING REQUIRED.

I wanted to play the game for the first time. I absolutely did not want to fix it, restart to see if some random solution worked, play for 20 minutes and spot another issue!


I have read all guides, PC Gaming Wiki and tried different stuff so you won’t need to.


This game has great visuals and style, which can be further imporoved by mods and external settings. Unfortunately, it’s not very popular and no one fixed controls*, so i recommend playing with gamepad. Also if you have DualShock, there is a mod to replace button prompts (△◯╳□ etc) for better experience!


* Keyboard controls are awkward and missing button prompts sometimes. Mouse works as simulated stick input with inertia and negative acceleration. With occasional lack of control over camera it is quite painful.

Issues fixed by these manipulations

Removes FPS lock, reduces stuttering and freezing. I was not able to get rid of freezing entirely, it happens when new parts of level are loading. I’m fed up with UE3 so considered this acceptable. There are also command-line arguments which are even more important than config, but more on that later.

Not much to do here. Set up as you wish and disable VSync!

If you want to cap FPS, use NVidiaProfileInspector or relevant tools for your GPU. This is not required, game works fine at any FPS.

In case you want to edit ExampleEngine.ini manually, here is what i changed:

There are several goodies for this game at Nexus Mods.

All mods are loaded with the tool called TexMod. We are going to try simple setup and improve in the next chapter. For now: 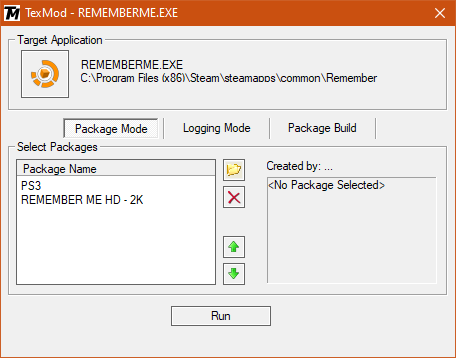 
Now this is great, but we need to go deeper…

Now things become a little twisted. You see, we need to run game .exe with custom command-line arguments to fix engine because config is not enough (thanks UE3!). At the same time, we need some mods to improve graphics. Mods are loaded by TexMod: it runs .exe and patches its memory, but does not allow user to specify command-line parameters for running the game. We will utilize advanced hacking magic to make both things work at the same time.

This is simple: we want Steam to run TexMod when we run the game. Just for our convenience.

Stage 2: fool TexMod to override what it runs

This is where magic happens: we will tell Windows that when we run some .exe, it should run another .exe instead. It works silently and transparently, a little-known native feature! It is used for debugging software mostly.

Go to C:\Program Files (x86)\Steam\steamapps\common\Remember Me\ExampleGame\Movies and delete these files:

A lot of guides mention constant stuttering which is fixed by assigning CPU core affinity to 3 cores. This should not be needed because we run game with command-line paramerer-USEALLAVAILABLECORES. However, if you still experience stuttering, try affinity trick. Please post your CPU model if issue still happens to you.

Thanks to RANDOMGUY7 for exploring UE3 settings and switches. See his thread for another game – [steamcommunity.com] .

Here we come to an end for Remember Me Engine Config & Game Issue Fix hope you enjoy it. If you think we forget something to include or we should make an update to the post let us know via comment, and we will fix it asap! Thanks and have a great day!