Zerg or zerg rush is a term used for sheer overwhelming numbers to take something in a big bumrush of chaos,

The way this game works is by population numbers to conquer a sector, thus this method is extremely easy to make powerful since you can have a fleet big enough to take most sectors by merely existing in it

The screenshots for this guide use the terran faction with everything but the station shield generator unlocked, but some of it like the proton beam are simply not used here

Your drones for this must be as cheap as possible, meaning youre gonna have to cut every corner to be able to just print these.

I use EXTREMELY bare bones designs with a nearly exposed core but they seem to rarely die if ever, partially due to the dynamic AI option.

Now you will need 4 types to make your fleet, and by extension you, unstoppable by any form of counter. 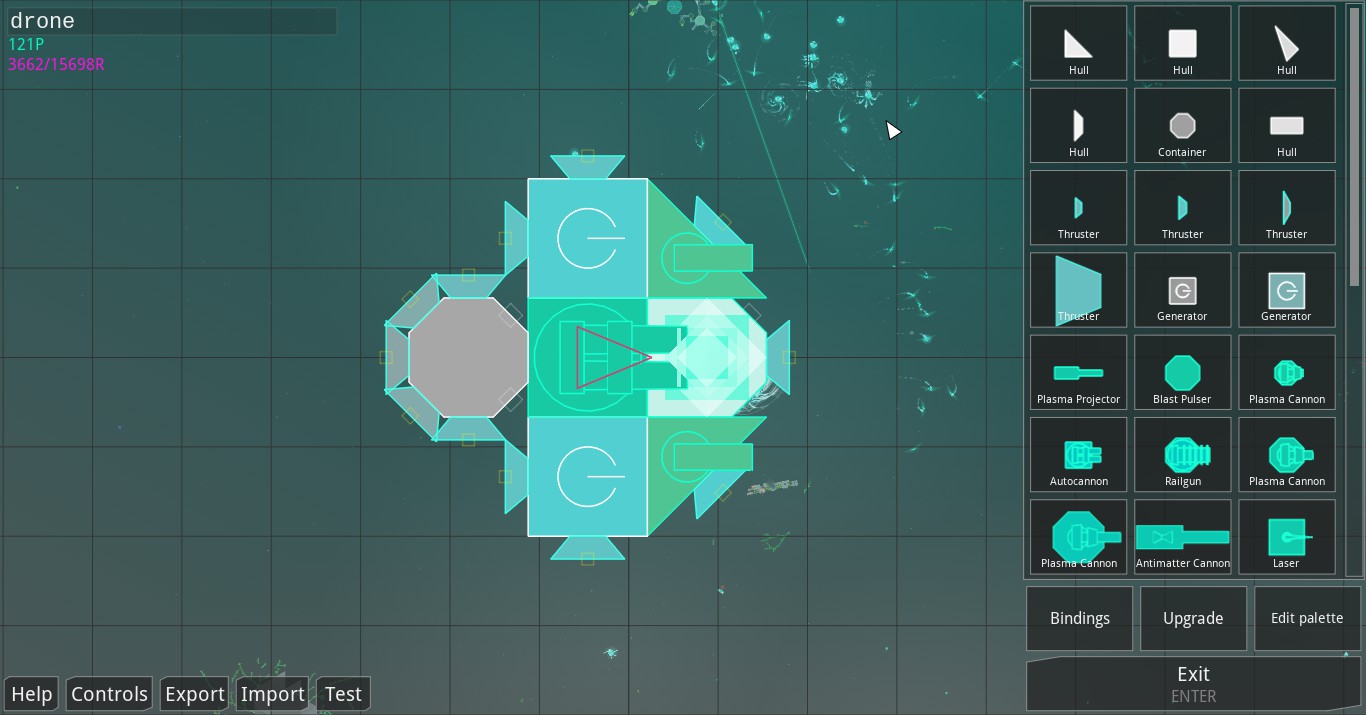 This here is my basic standard drone, having a container and a basic pew pew weapon set. These are your fleet backbone and serve mainly as resource gatherers on top off going pew pew at things.

-at least 1 but NO MORE THAN 3 generators 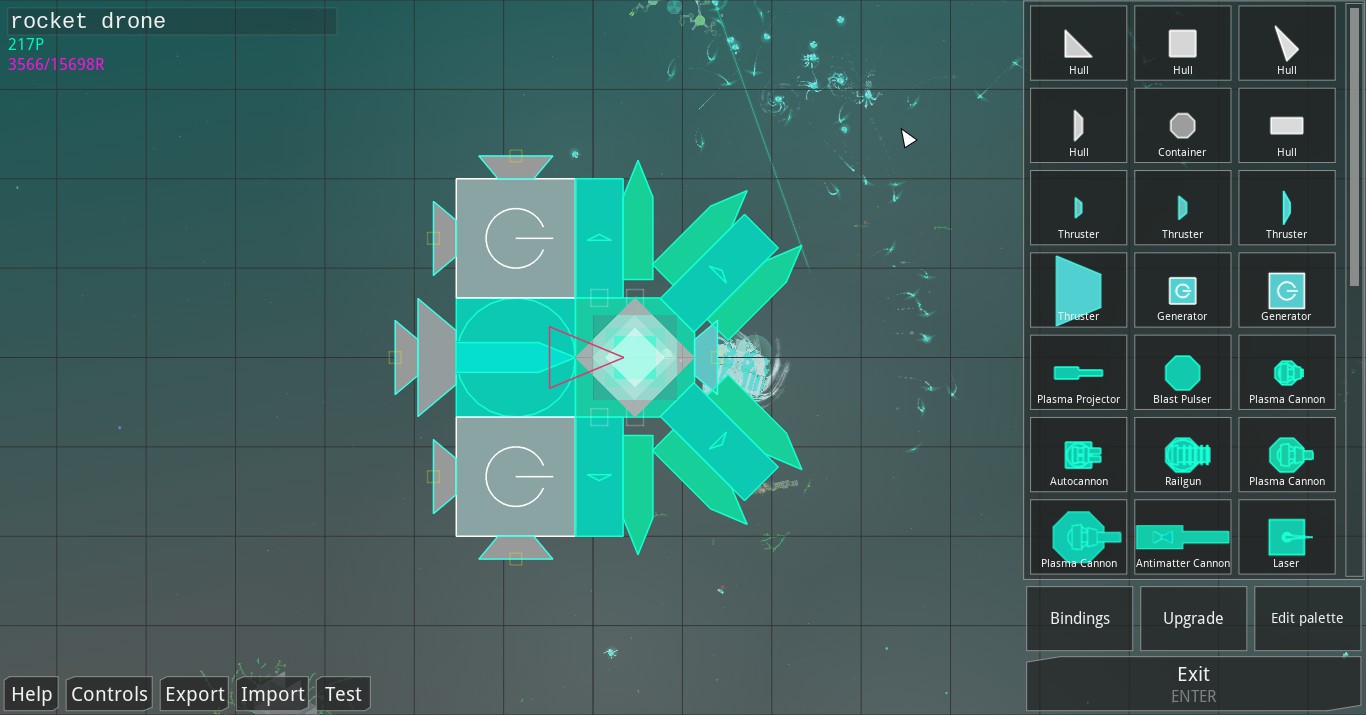 This drone is meant to be anti heavy armor against bigger threats with big tanky wall ships. In this example i went overboard with missiles and it became TWICE as expensive as my basic drone, but far worth it. I used homing missiles because theres no way in hell the AI could ♥♥♥♥ it up.

-depending on the weapon type, possibly 3 generators will be needed to recover quick enough 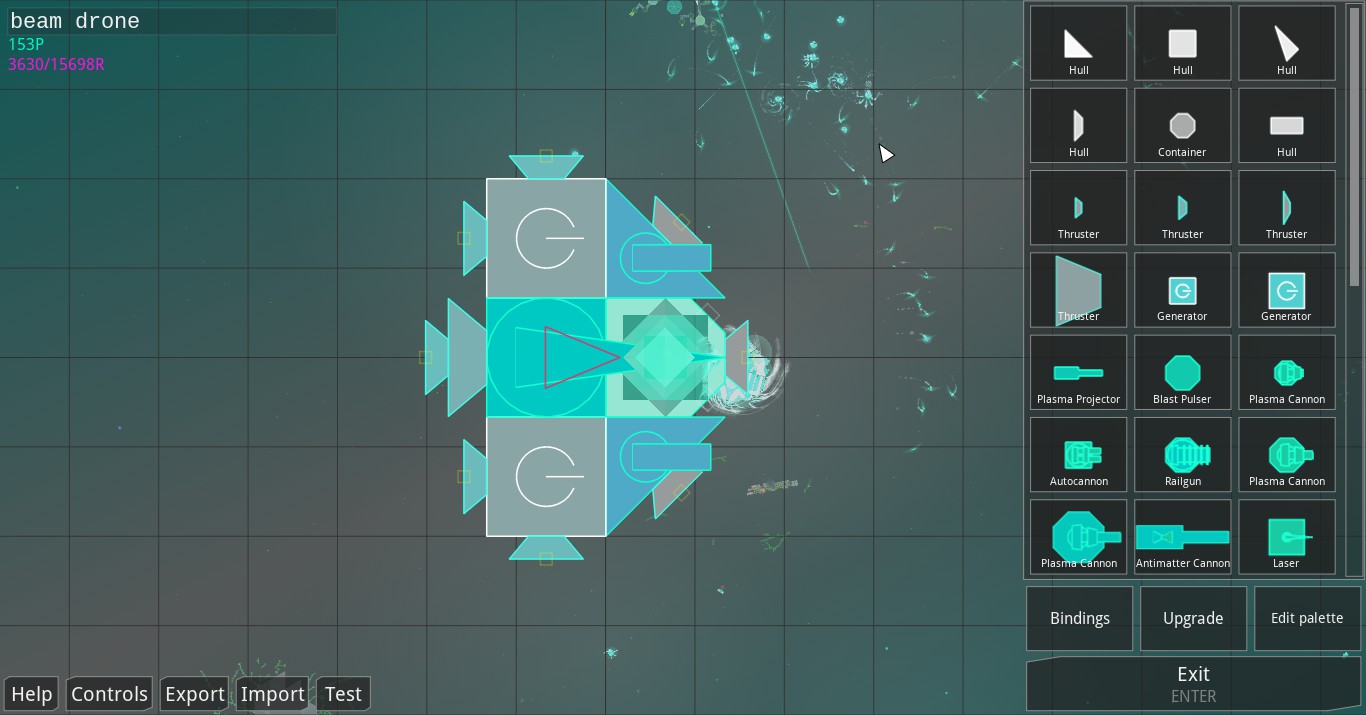 These are designed to intercept incoming bullets into your fleet, such as big sniper shots capable on one shotting your weak weak drones. This works because burst lasers are REALLY good at single target point defense, on extreme levels. They can also counter shields COMPLETELY in numbers due to laser damage doing the most to shields, aka farmer stations are now just entertainment.

–ONE burst laser or equivalent

–TWO generators to power it 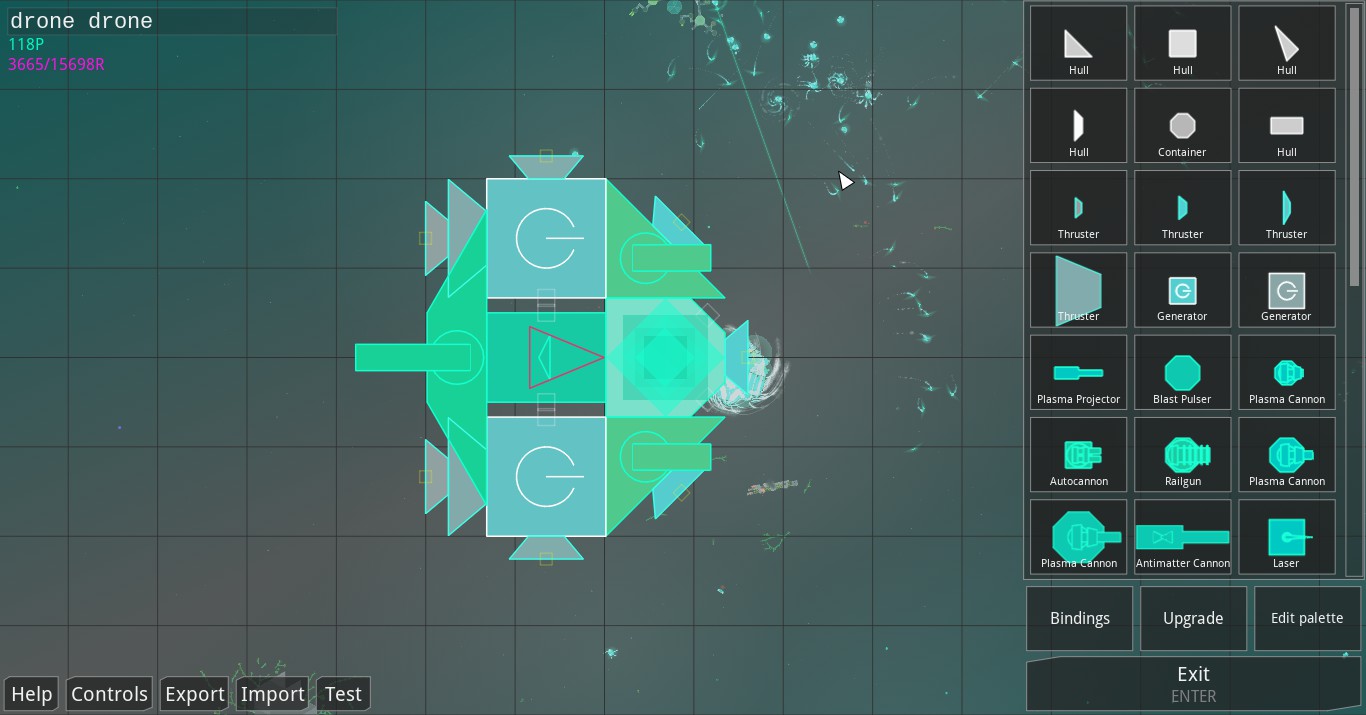 
This drone is meant to basically keep your firepower up to really high numbers if YOUR drone factories take a hit, and make up for any lost members until they can be replaced. It only needs to be able to outrun and kite things. Dont worry about the AI, the dynamic will always kite.

–ONE drone deployer of choice

-4 direction thrusters if possible, 3 required(left right and forward to kite away)

Your carrier will be the most central part of your fleet, it will be able to assemble your cheaply mass produced fleet of disposable reliable drones for you to conquer all the galaxy with. Do not worry if you die, your fleet will continue to cause havok long after your death.

While your carrier can be assembled any way you wish, there are several key things that will be needed in order to not be like a real aircraft carrier and return to dust at the slightest missile or torpedo. 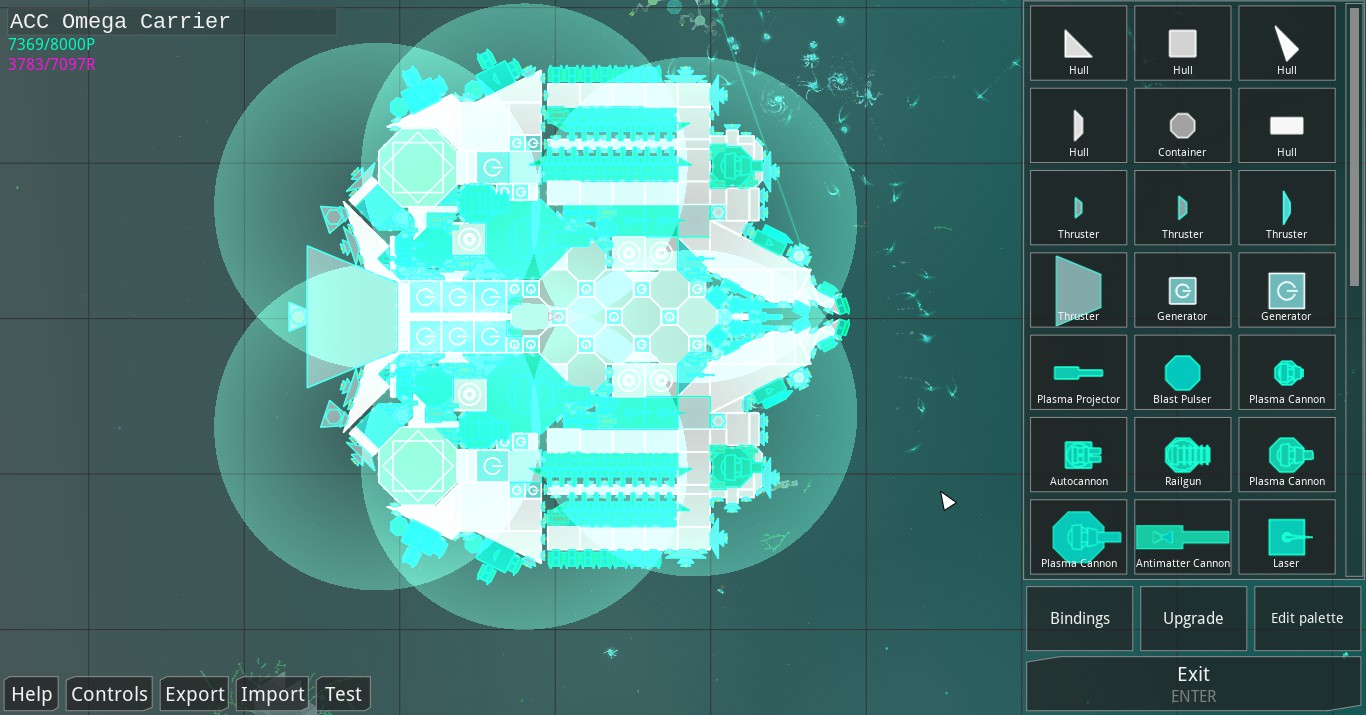 This is my design i will be using to demonstrate what parts are needed and what is luxury for such a thing. Understandable if its hard to see.

-Four automatic drone arrays, 2 on each side

-4 manipulators on the corner areas of the ship

-4 mine layers because ♥♥♥♥ anybody following me in paticular

-a looooot of hidden defense turrets to fill in gaps. like, a lot, look at this. 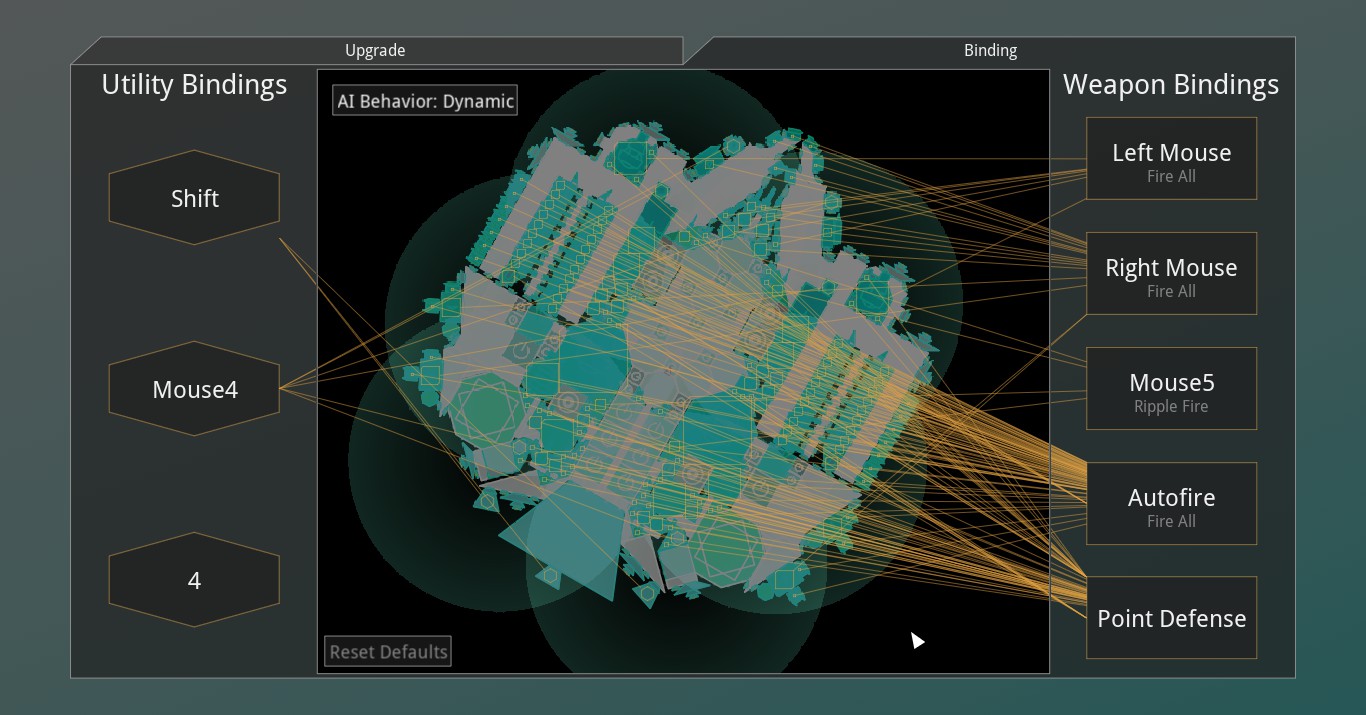 Some of these are again luxury but lets go over the basics needed.


Semi self explanitory, this is the backbone of your ship. Generators, containers, the likes. I had a decoration thruster positioned behind it because i thought it did something. Dont do this, please. Game thought my ship was a station for a while.

I shouldnt have to explain this, you have done this for nearly any ship you made up until this point. The center positioning is key to allow things to be built around it more easily and allow it to be deeply protected by everything else.


While you may have a lot of drones and point defense drones at that, these drones are still very much run by AI, and things can slip through. Shields only protect you so much. While i used defense cannons and flak cannons to fill holes, you can use these more effectively. Pulse beams are by far the best anti torpedo measure in the game for terrans, as it can easilly get rid of them with a wide range and arc. Pulse sabers or whatever theyre called are the more powerful short range alternative. Theyre good for stopping things from hitting you in your big ugly ship face while they eat through your 5 digit power figure.Missiles are your main concern among large shells from sniper turrets.


These are pure luxury but really help your fighters tear up some craft when it wants to flee, such as agents who will now just ♥♥♥♥♥♥♥ sprint from you ASAP and make a mess of your sector population.They allow you to keep things in place of your stationary front weapons that cant turn.

Lets face it, a big huge slow to turn ship, even if mobile, cannot turn every direction at once. Automatic firing heavy guns n such are your best bet for brainless play mode rather than micromanage your drones on the nearest target. By far the most flexible component but also very very needed. Missiles reccomended.

These are your first line of defense after point defense and between you and your armor becoming fried chicken. Burst shields i reccomend for reinforcing stuff after your shields fall, but i use these to cover fringes on the edge of my shields. Burst shields are emergency shields of sorts, main shields should cover everything on your ship so try and constrain it to their radius. Overlapping is a bonus luxury but i have 6 to cover the sheer girth of my ship.


This is the thing to make you be able to defend yourself against the harder targets like big huge destroyer ships.I reccomend torpedoes and fixed cannons alike, but a few turrets are nice such as rocket and gun turrets. While i had the ion beam unlocked, i just didnt have any room to shove it in without ripping out my insane looking arsenal from hell.

Drone array(lots is a luxury)

Just a couple side wings full of drones to deal with small fighters and mop up other things while supporting your fleet. I reccomend autofire for this to simply forget about them altogether. If you have enough, ripple fire is possible, but all fire is wayyyy funnier.

Harvesters extend your R pickup range. absolutely essential for big ships as its based on pickup range from the block. So having enough positioned around your ship is great to keep a nice custom radius of pickup for these when your drones bring you gifts.

The key component to success, these will bring you fortune in great multitude and why you need so much damn R storage.These will be the key to making anything so best to protect them at all costs. If you use decouplers, dont put these near them nor generators. These will amke your fleet and distinguish you as a proper carrier ship.

You now have everything needed to begin the big rush. You have loads of R and have set out on your journey. A few strategies to use before you get yourself killed anyway.

Your main goal is to build up a large fleet very very quickly, and most times i found myself just sitting still in hostile space just holding f. i know, great gameplay. This is why i said give your factory plenty of space and your basic drones a container. I often found myself hitting a 7000 R limit and my drones holding most of it while i hobbled my way to a station through a painful to navigate asteroid field. If you cant print fast enough to empty thyself of R, then you need to stop and wait

For fleet modes, there are only 2 you will use. Target my target and free target.

Free target allows drones to do whatever the hell they want and cause a ruckus, a bit of tomfoolery. Far easier than micromanaging 50 drones and 150 deployed drones. This is the most effective mode when dealing with another fleet.

Target my target will make them target a specific target and focus their collective ♥♥♥♥♥♥♥. This can easilly shred a farmer station despite it having the best shields and stations in the game. Just press g and space with your cursor over the one you wish to banish to the ♥♥♥♥♥♥♥ shadow realm 😀

As you’ve noticed, you have a lot of drones that always follow you and can populate an entire secotr. IF you always print them but never get rid of them then they make your pc cry out in agony. Here is the 2 ways to get rid of them

press tab to switch to command mode and begin clicking on drones for credits. Not only do you seed a population for a sector, but you also get straight cash. Just leave yourself at least 1 of each type, maybe 2. You can always make more for like nothing.


congrats, you have become uncontestable, truly a game winner. go have fun yoinking stations left and right for fun or unlocking all the factions

go rule the galaxy with an iron grip or something 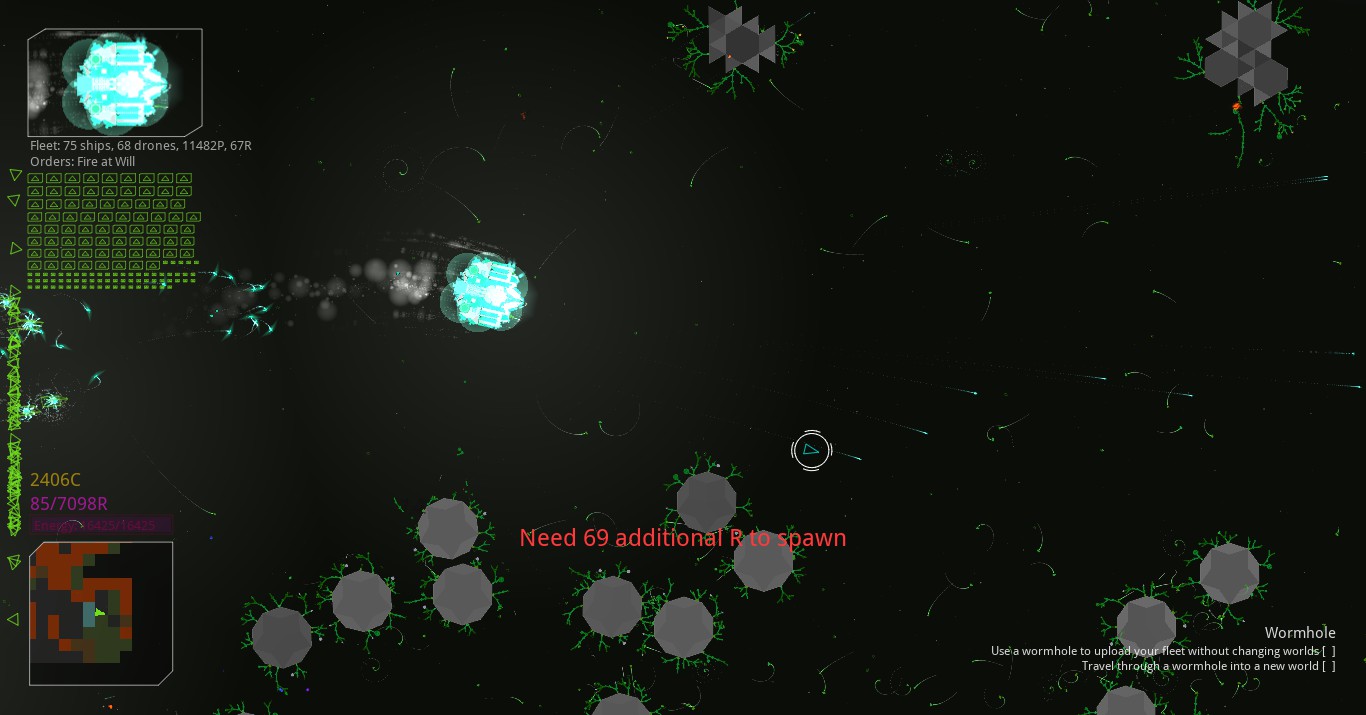 This is all for Reassembly Zerg rush + basic standard drone hope you enjoy the post. If you believe we forget or we should update the post please let us know via comment, we will try our best to fix how fast is possible! Have a great day!