Since this game offers the most realistic train physics i came across, I decided to talk about how moving wagons and trains behave.

The point is to give some advice to improve your driving and handling with the game´s physics.

Why do i derail and why do i have runaway wagons? 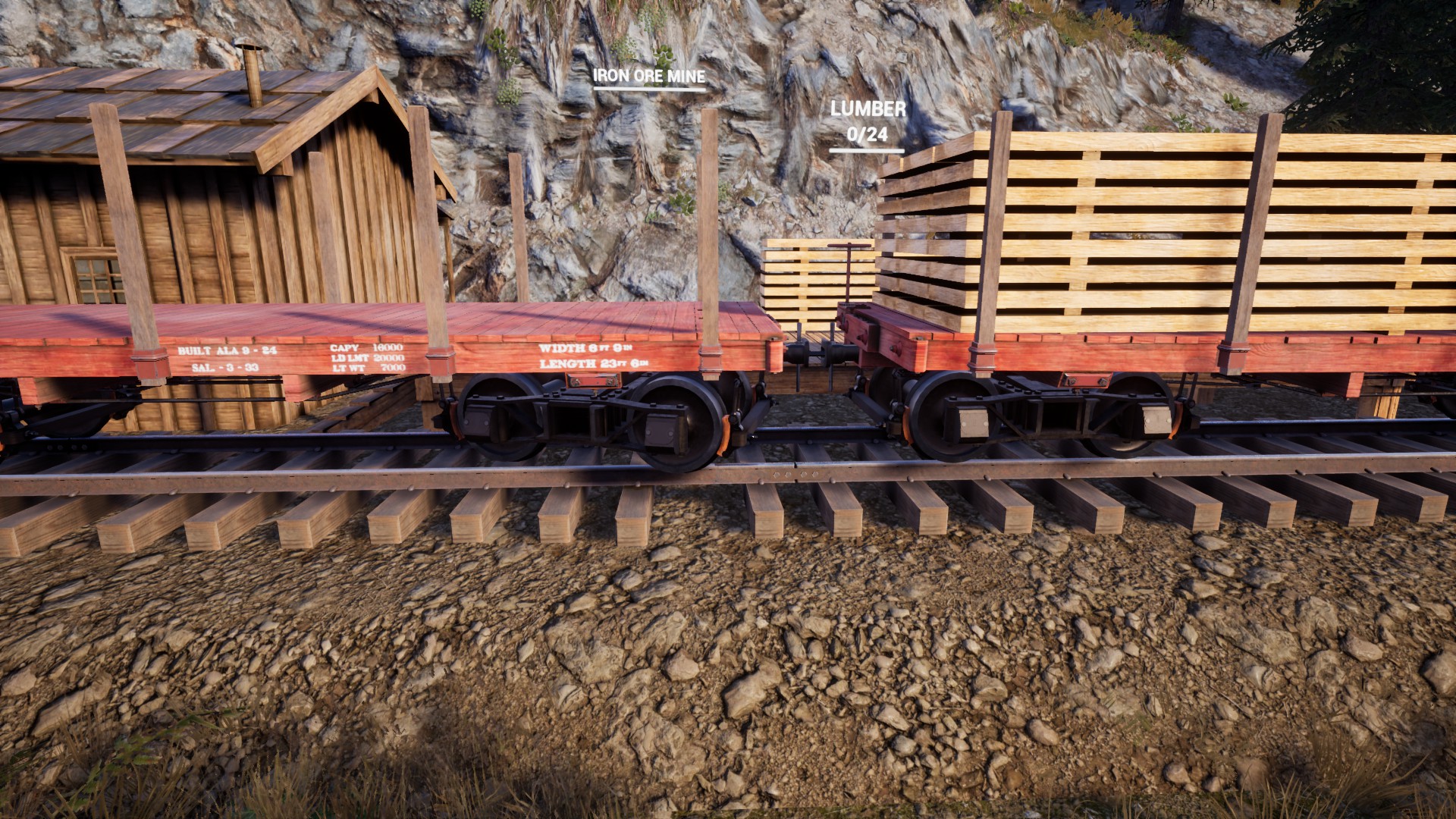 Some of you might already have seen the position of the bogy like that ingame. You think its a glitch, but in railroad terms it´s already considered as derailment. And though it might not seem like a derailment in the game, you still were pretty close to it.

Also you might wonder why you have, thus linked, suddenly without an apparent reason runaway wagons.

By bringing you the train physics a little closer i hope you will understand what leads to these situations and how to avoid them for the future.

How does a train stay on track?

This brings us to our first question.

How is it possible that a train stays on its track?

Well it´s neither sorcery nor fairy dust. It´s simple the shape of the wheels.

If you look straight at them there might not be something suspicous about them.

First of all they are round, like all other wheels, but if we take a closer look at its profile it reveals its finesse. 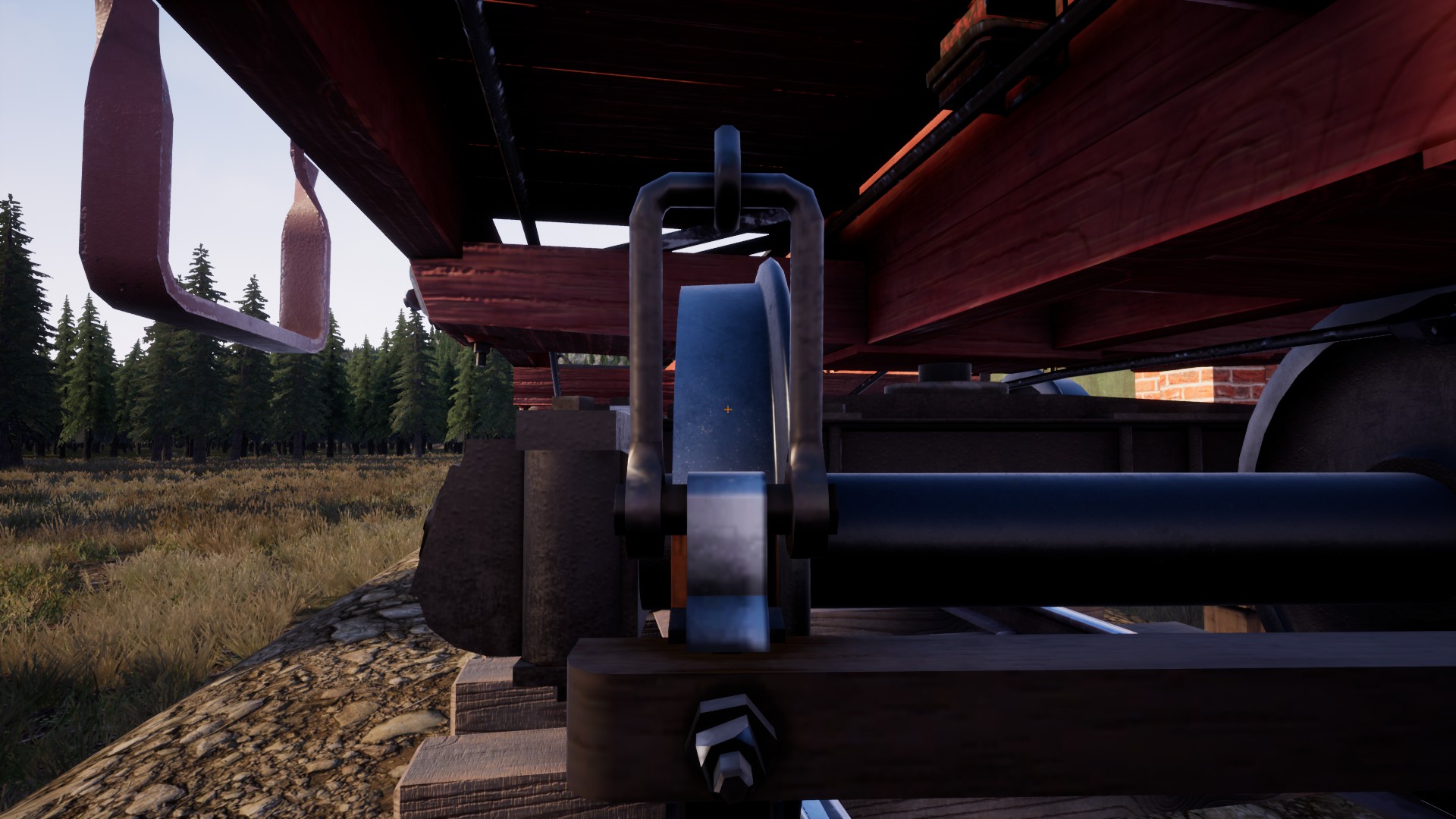 In this picture you can see that the wheels tread is not flat. On it´s outer side it becomes smaller in diameter and giving it a conical shape. At its inner side you see a flange. This wheel flange keeps the train on the tracks. When you see a freight train passing by and you hear a metal scratching sound; those are the wheel flanges which touch the rail.

Now to the point where the wheel tread has to be conical. The wheels are always a set of wheels connected by a shaft, which means the wheel on the right and left will always run at the same speed. This will cause a major problem when going through bends, because the inner wheel has to turn faster than the outer wheel. The conical shape will simply compensate that and on a straight piece of track it will help the wagon or locomotive keep centered between the rails by its own weight. I could go more into detail but for the game this should be enough.

How long is your train?

You have written the length of the wagon on its side, just sum them up and you know how long your train is. This length you need to know as train driver or as train director, but for driving a train there is also another length responsible for its behaviour. It´s the space between the wagons.

The links between the wagons have play. Doens´t seem like much but with long trains it can add up to a whole wagon length in total. In addition to that i can mention that the links are in purpose the weakest part in the connection between two wagons. They are meant to snap if an adjusted wagon derails so it doesn´t drag further wagons off the track.

Here are two examples of the two different link states:

This one is compressed 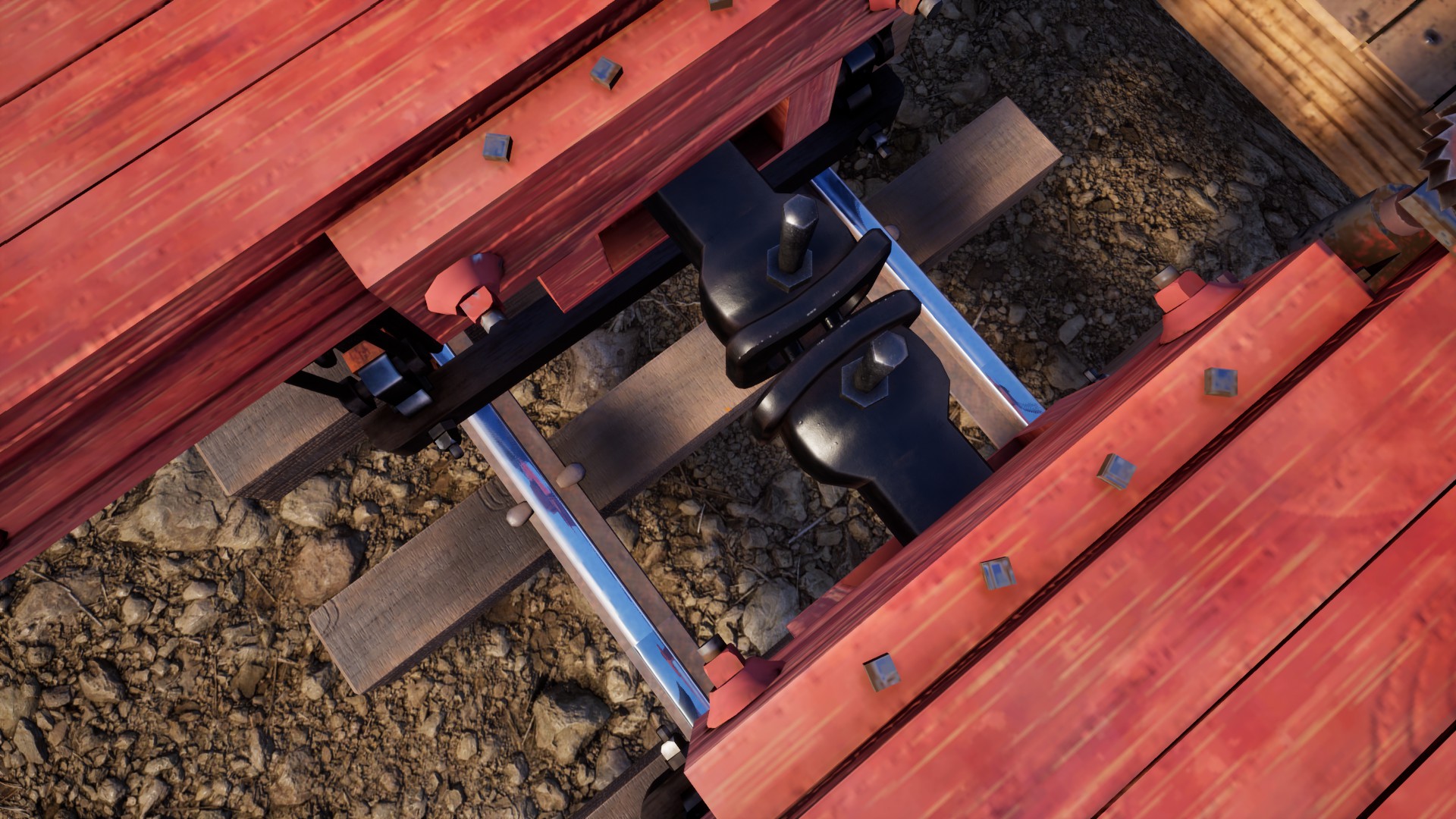 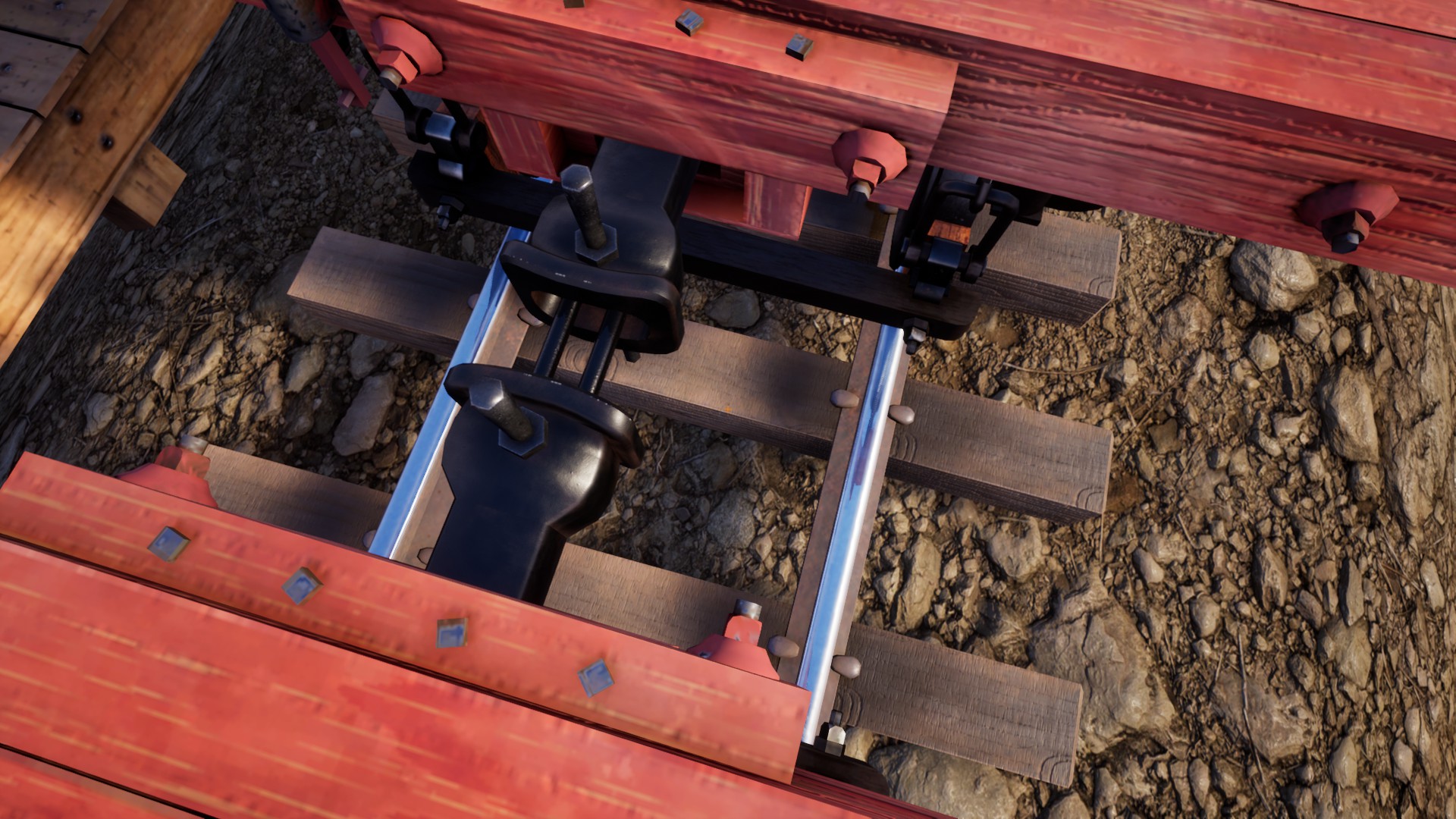 We have to keep this in mind, because in the next topic i will explain why this is very important.

Now this is a topic where a good driver is separated from a bad driver.

So what does Acceleration or Deceleration mean in train terms?

First of all you have the weight of your train. This is a mass where tractional force has to be applied by your locomotive. You will be surprised that you will only need little tractive force to start a train moving, because of the steel track and the small locating face of the wheel also made from steel.

This generates small friction and thus less force is needed. As simple as it sounds, gaining speed is easy and therefore i will not talk much about it.

In reverse this means you have very bad conditions for deceleration or simply braking.

But first a few things about acceleration. As we can recall the train has a streched and a compressed state. When at a stop this state will differ amongst the wagons. Some links will be streched or compressed. If you now start to move all links will become streched, which also means the weight you want to pull adds up till you have all wagons moving. Therefore better start with low tractional force till all wagons are moving. When applying too much tractional force your locomotive will start wheelspinning, if so, reduce your tractional force by lowering the regulator percentage. Only use sand if this doesn´t help. But in that case most likely your locomotive is too weak to pull that weight or the incline is too steep. Another bad case scenario while starting to move is when too many links are compressed ,or some wagon brakes are applied and you are hard on the regulator. This might let one link snap (though they aren´t broken after snapping) and you will leave some wagons behind and maybe those will become runaway.

Another point i forgot to mention. Locomotives have no gearbox (well diesel locomotives have something similar to that) going 30% on the regulator will get you also to maximum speed. It might not be as fast as 100%, but it consumes less steam and depending on the weight you move, you might not even notice a big difference.

As mentioned earlier gaining speed is easy, but braking is hard to master. Especially coming to a halt at a designated point. It becomes more difficult the more moving mass you are trying to decelerate. Another pivotal point are the wagon brakes. Because there are no air pressured brakes you are most likely to adjust the brakes for the wagons to the part of track that lies ahead.

But what happens if you try to decelerate, or in another term apply braking force?

Of course it´s vice versa if you are pushing your wagons. The links will go into a streched state and with each streched link the mass you try to decelerate builds up. If you brake too hard the links will get stressed too much and break at some point. So be easy on your braking. Start weak and apply them slowly over time.

This is the part where we go back to our first picture.

Well this topic should be pretty short, because it´s pretty simple. Don´t go too fast around a bend.

The narrower the bend the slower you have to be. The mass of your train wants to go straight and the track works against that force. A centrifugal force applies and the wheel flange climbs the outer rail. At some point it will climb over the rail and you will have a mess.

Also a narrow bend is a situation where the links are the most stressed. They are streched to the limit and if you apply too much tractional force they will snap easily. Most train serparations will happen to you in too narrow bends. A good way to go through bends is by applying minimal brake force so that the wagons will bump into each other and compress the links.

The moving mass of your wagons will push you safely through the bend. After the bend it´s crucial to wait till the last wagon has left the bend. Don´t accelerate too early because the physics of the bend still work on the wagons in it.

If you are pushing your wagons you can slightly accelerate to achieve this state of the links. It´s also advisable that you slightly tighten the brake of the first wagons which enter the bend.

For real , why do i derail and why do links snap?

After spending some descent amount of time in the game almost all derailments or snapping links were my own fault, because i was too much a son of a gun. Especially when driving on a fresh layed piece of track i never drove before. I noticed that the physics in this game is very forgiving and sometimes very odd, but the more i behave like very cautiously driving a real train i had only a few snapping links and derailments which i couldn´t explain. Therefore i decided to create this wall of text for you with some topics to keep in mind.

I think it will help you and maybe not all of the mentioned things will apply to this game, but if you concider them it will most likely help you to understand what went wrong.

Hope you enjoy the post for RAILROADS Online! Tips How to Improve Driving & Handling Trains, If you think we should update the post or something is wrong please let us know via comment and we will fix it how fast as possible! Thank you and have a great day!