Because winning as the infected is currently 95% effective against randoms, here’s a fun “character” I created.

The Alpha, and the Omega. The true path to enlightenment.

Step 1: One cannot simply play as the Archangel straight away. Play for at least 10 hours or learn the maps well enough to win nearly all of the time as the infected.

Step 2: Once you have chosen any of the other PIggy specific infected skins, and won a multitude of previous matches and you’ve acquired enough bacon currency, its time to acquire the Archangel garb and the staff.

Step 3: Using any equipment of your choosing (Bonus Points for not using bear traps), make sure to murder every last helpless soul without using a weapon from the animation menu.

Step 4:This is the chosen one, hopefully the aren’t AFK, its best to check the spawns once you know there’s at least one active player, so as to not wander around only to realize it’s just you playing.

Step 5:Now for the tricky part, you must have them know you could have killed him or her, but chose not to. For example, if they get caught by a bear trap and you can execute, do not. If your giving chase and you anger meter charges up, race in front of them. Dead end the last “survivor” (I’m not sure why they’re called that, don’t you have to survive and actually win to be a…. survivor?) wiggle around, and then deliberately move to let them pass. This is easier performed as a welcoming approach. Not a taunt. Opening and closing doors rapidly could give them a hint.

Step 6:This is when it gets interesting. At first, they may think your sandbagging, or giving them another chance or fair shot since the map design at times is well thought out to win as a survivor but other times impossible to win as survivors . They could stun you. They could slam doors in your face. They could use 200 IQ plays thinking they’re outsmarting you. But do not attack. (Unless they stun you three times, then its up to you) Eventually, they will realize your letting them win, or enough trust to be able to complete objectives without being assaulted. This might raise the question of the ending outcome. But what’s interesting is the survivors must have required faith that you won’t murder them to win. Seeing as you could have laid them to rest probably ten times over by now.

Step 7:If you detect a beginner, lead them through the valley of darkness. Sometimes it works to be in front and the flock with follow. Easier said than done since there is no voice or chat. (Thank goodness) Try shaking your head at them or bound away from the player. Show them where the items are, wait patiently for them to complete tasks. This would look something about like so- 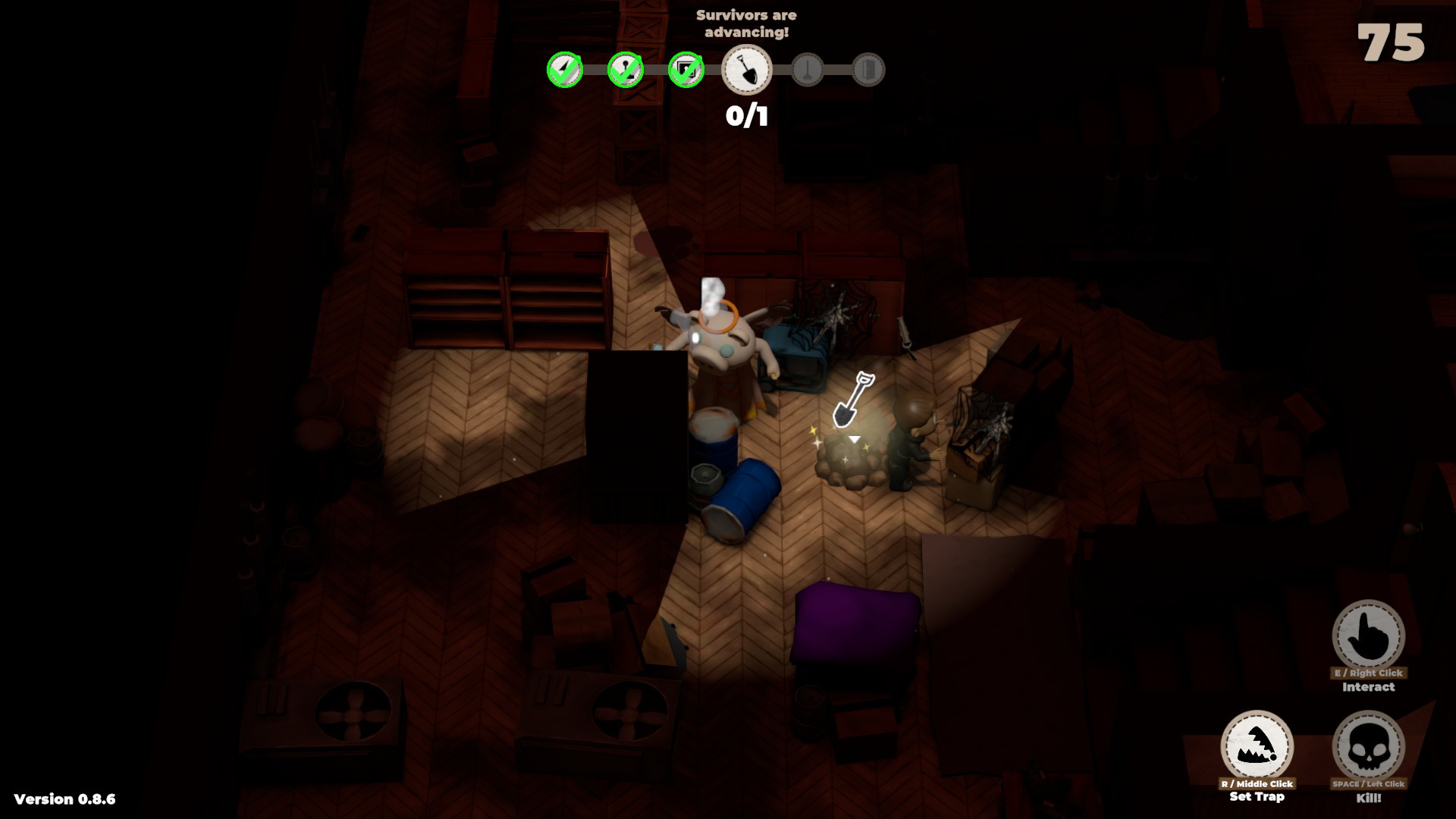 It’s time for enlightenment, strategy, and understanding to come into full fruition.

Step 8: Now for the final step. To win properly as the Archangel, you must watch as they exit through the final door, holding still, letting the players win. Or to be suspect and have an extra spicy ending stand directly in front of the door, speaking without words asking the survivor the last question. “Do you trust me?” Either move aside or turn around when they cross the threshold.

But so far the players take too long to realize or do not have enough map knowledge or sometimes forgetting where crucial items are so time runs out anyway and you end up winning regardless, without absolute slaughter, even going as far as to help the chosen one. Shake your head directly facing the camera so as to inform the ghosts their team has failed during the last five seconds. Have fun!

You may be asking “Why only allow one survive?” Well its more thematic and entertaining to have everyone get surprised as floating ghosts watching events unfold. The idea behind knowing you could win, but chose not to. To play the game differently using your own set of rules by not winning easily every time. Otherwise they might think your just inexperienced or worse if everyone but one escapes. The message, must be clear.

Here we come to an end for PIGGY: Hunt Archangel Piggy Gameplay Tips hope you enjoy it. If you think we forget something to include or we should make an update to the post let us know via comment, and we will fix it asap! Thanks and have a great day!