Information about that pesky PSE bursts and so

Pse burst is a brief period where mobs spawn nonstop and ends with a rare variant of a boss. It is acheived by killing mobs in the combat sector, to which may give pse level ups, pse downs, or nothing. Once the pse level has reached level 4 and a T trial is cleared a burst will trigger. Can only be found in combat sectors.

There is a “no pse level down” time threshold. This threshold use to be around 15 minute after a burst. But with each updates it gets change. It’s currently around 10 minute. Yes, you can afk in a combat sector to trigger this threshold. The # of players present does not affect this threshold.


During threshold, sometimes it is harder to get pse ups and generating that T adding in quite a bit of extra time. Somewhere around 4 – 7 minutes. Thus, splitting up is recommended when at threshold to prevent this.

When completing a trial, but there is no burst despite the levels being at level 4 and did not drop. This only happens with T trials that spawn platforms. There is no burst because the platforms are blocking the burst area and the game can’t find a suitable spot to spawn the burst. Despite there being an open area right next to it. Don’t worry too much, as another T will usually spawn almost instantly again.

Methods on how to get PSE burst

The default way to farm a burst is to just follow the E and T marks and kill mobs in it. Most players are akin to this method. Although, this way works, it’s indifferent to when a burst is gonna happen. It can be as quick as 3 minutes or take as long as 15 minutes. More than half of the time, the burst happens because the time threshold has been breached. Average burst time is around the 12th minute.


The main problem is slow kill speed, and wasting time as group chases E and T markers in circles, unable to engage in other packs of mobs. This causes a condense volume of mobs in a corner which now hold most of the pse ups. Also, if E points back to a half dead pack of mobs, a pse down is probably coming. Full wipe out of a pack of mobs is all to common too, which means lots of pse downs.

Follow E and kill mobs until a T appears. Ignore T and continue killing mobs till pse level 4. Afterwards, go finish T for burst. If no burst, wipe out T and restart. An alternate strategy is to leave 1 mob or boss alive at T to decrease the chance of T mark mobs dropping the pse level.


This method grants fast bursts. The more players the faster it can get. Anywhere from 1 – 5 minutes. And can grant multiple back to back bursts. This method almost never reach time threshold as a burst trigger no later than 7 – 9 minute.


Confusion usually ensues as player often don’t know what to do and end up dropping the pse levels. The chaotic atmosphere also makes it easy to accidentally drop pse levels when at pse level 4. If T is not wiped out after some time, mobs will seldom give pse ups. Groups who use this method are usually private to prevent hiccups.

The main objective is to do a fast sweep across the map collecting pse ups. Ignore the E. Ignore killing all mobs. If a T appears and pse level is 3 or 4, attempt T. If not, sweep around T till 3 or 4. If still not pse level 4, either wipe T then continue sweep, or reset instance base on what the pse level is at. You are only looking for 1 or 2 burst max per instance because the first burst of any instance is easier to get.


Reason you don’t see this: it’s a solo method but can be done in groups too with a little variation. It can give absurdly fast burst. Less than 2 minute, up to however long you wish to attempt but avg around 5 – 7 minute. This method has a problem of having pse level 3 or 4 but no T mark available or the other way around. In addition, there is no safety for a sure burst since the instance is reset before the threshold.

This one is easy and always gives a burst within 1 – 3 minutes. Simply wait for a storm then go to a combat sector. Kill stuff till a T appears. Finish T. The only problem with this method is waiting for a storm to happen. But, storms do happen quite often after a previous update. When an urgent quests is happening it usually triggers at least 1 storm.

With each update, the ability to consistently get pse bursts gets worst and worst.

The offset to this seems to be consistent storms.

If a storm is incoming, the threshold also seems to be in effect.

Pse burst doesn’t offer any significant loot that can’t be found anywhere else. 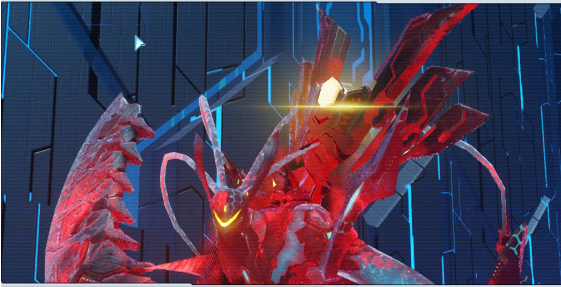 In order to farm enhanced mobs efficiently, the map must be controlled to not trigger a pse burst. As a burst can take 3 – 4 minutes to complete. However, a burst cannot be avoided indefinitely due to the time threshold.


All instances spawn T differently. If you get a slow instance, refresh it or jump to another block. Some instance will refuse to spawn T and some will spawn them so much you don’t even have to apply the farm method. Enhanced mobs use to spawn in great numbers around 3 – 6 including bosses. But as the game updates that number has drop significantly. It is now around 1 – 3 including bosses. Average is 2 enhance mobs per spawn. It is rare to get 4 or more.

Start by killing some mobs at the E but leave 3 – 4 mobs alive. This is important as you want to kill enough mobs so the E mark wants to move to a different pack of mobs but you don’t want another E, you want a T. Thus, the 3 – 4 mobs alive. Sometimes, the marker will move anyways.

Then start killing other mob packs that surround the E. This is to get rid of options for the E to jump to the next pack of mobs thus making only option left is a T. Wipe down to 2 – 3 mobs if possible. If T spawns before most mobs are dead, pack can be left alone.


If a T mark doesn’t appear after a couple of mob packs then recheck T trigger method, pick one, attempt it and hope it’s not the time gated one. Sometimes, a new pack of mobs have spawned next to the E mark preventing the spawn of T. A teleport back to the ryuker can do the trick too.

After finishing a T, most of the time a new E will spawn.

B. If it marks a full pack of mobs surrounded by no other mob packs, kill mobs at E.

C. If it marks a depleted pack of mobs go to step 2.


When executed correctly, T will spawn every chance possible, even getting consecutive T spawns. When threshold is reached kill mobs at E to get T but don’t take too long. During threshold, it’s a lot harder to get pse ups and a T. Sometimes it can take up to 6 minutes.

Alternative to farming enhanced mobs is in exploration sectors. Mainly north Aelio. Just like in the combat sector you simply just kill off mobs in the sector till a T spawns. Then hope that it has enhanced mobs. The more players that participate the quicker a T spawns. If enough players participate, T will spawn instantly within seconds of each other, outshining combat sector’s #.

Try to have a good way to upkeep PP. Sub Force/Gunner or have armor with performa fixa.

Must be able to deal with bosses quick. Good time is around 45 seconds.

In group, do not gather in more than 3 players at E to prevent mobs having lots of hp.

In group, if T trigger near you and no enhance wipe it out. If have enhance be courteous and wait for group before killing enhanced.

All info here can and will change without notice. Though it may be right at the time of writing, it can be wrong the very next day. These are not facts.

This is all for Phantasy Star Online 2 New Genesis Basic PSE Burst Information + Methods Guide hope you enjoy the post. If you believe we forget or we should update the post please let us know via comment, we will try our best to fix how fast is possible! Have a great day!