Guide to the spiritual successor of Barkley : Shut up and Jam, Gaiden

The Basics – What am I looking at?

This is the fearless protagonist, Peglin.

This is a Crit Peg

Hitting it will make your ball deal

Crit damage instead of

Crit Pegs will move to different positions every turn, but there will always be the same number of them.

This is the Refresh Peg

This is a Bomb

Hitting it once will light the fuse, and hitting it a second time will detonate the bomb, dealing 50 damage to all enemies currently on the screen. This damage will happen BEFORE your orb is fired down the line.

Detonating a bomb will also rapidly launch your ball away from the detonation.

Typically, bombs will be permanently removed once detonated and there’s no way to get more of them, however certain Orbs and Relics can change this.

This is a Red Bomb

Hitting it once will light the fuse, and hitting it a second time will detonate the bomb.

Red Bombs damage you for 4 health, and this damage is applied before orbs are thrown, just like normal Bombs.

They’ll only be encountered during Area 3 unless you have Sapper Sack.

The goal of Peglin is to make it through all 4 zones, and eliminate all enemies in your way en route.

The first step to doing this is understanding how to deal damage to enemies effectively. 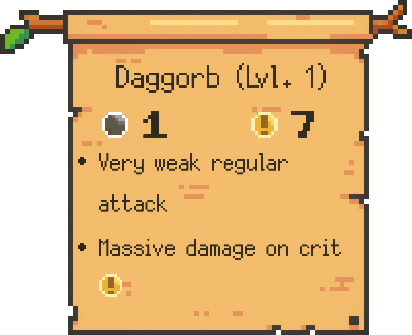 This here is what a typical orb will look like, with the

Crit damage listed, plus a description of the ball’s unique properties below.


As explained above, the ball will deal

Normal damage unless it hits a

Crit Peg, in which case the ball switches to its

For balls like Daggorb, it’s important to recognize that you won’t be able to hit a

Crit Peg every single shot, and you can right-click to discard it when you know it would be better to use something else.

This comes into play even more for some unique orbs like the Memorb, Echorb, Doctorb, EGG, etc – discarding is something you should be doing pretty often.


Frequently, you’ll be offered the chance to upgrade one of your Orbs, either through post-combat rewards or through a random event. Orbs can be upgraded to level 3, and in some cases change how they’re used fairly drastically as they’re levelled up. In the Orbs section, this is explained in some more detail.


When you’re aiming, you can also use the mouse wheel for precision control – this does not work if your mouse is not 100% stable while scrolling.


Stone is a slightly heavy orb that is incredibly consistent, but not in a good way.

There is always better options to add to your satchel, unless you’re doing a Orbelisk run.


You start the game with one daggorb, and picking up more is never a bad thing. Landing critical hits is a cakewalk most of the time, and you can always discard it when it’s not viable.

Dense, Triggers each hit peg 2 times, can target any enemy on the screen

Denser, Triggers each hit peg 3 times, can target any enemy on the screen

Densest, Triggers each hit peg 4 times, can target any enemy on the screen


Orbsium is a heavy orb that gets heavier every upgrade, so it won’t travel as far and won’t bounce as high. Despite this, it’s still very useful.

Orbsium is capable of detonating bombs in one hit at any level, since it triggers pegs multiple times.

Orbsium is also useful with the Eternal SufferRing or Swolorb, since it can hit a higher-damage peg multiple times. Additionally, if you get any damage modifiers like the Power Glove, Orbsium can become a powerhouse of an orb that’s useful for taking out high priority threats.

Light, Detonates Bombs in one hit, Deals 2 damage to self when fired

Light, Detonates Bombs in one hit, Deals 2 damage to self when fired


Infernorb does respectable damage, is good for clearing bombs, and holds momentum well with its Light modifier. The 2 self-damage on fire is barely even a downside, this orb is basically Stone if it were good.

Heals instead of dealing damage

Shatters upon hitting a peg


EGG is an incredibly unique orb, which in the right scenario can be devestating to use.

It’s only found during the “Shake the Tree” event, and you won’t see this orb very often at all.

The trick to using EGG is that it only shatters on SOLID surfaces – firing it into slime can let you net an insane amount of health AND you get to keep the EGG if it doesn’t hit a solid peg, wall, or bouncer on its way off the screen. Mostly useful for getting some clutch HP during the Slime boss fight.

2 for each Bouldorb in your deck.

2 for each Bouldorb in your deck.

2 for each Orbelisk in your deck.


Orbelisk can be found randomly, or during the Orbelisk event. It can be the highest damage orb in the game, and incredibly consistent if you have a few level 3 Orbelisks in your satchel. Unfortunately, it means you need to bog down your deck with a ton of Stones and Bouldorbs to do very well, so if you don’t have bonus discards or persists then this orb’s bonuses will be offset by the bad deck it requires to operate.


Like most games, Peglin gives you a 100% chance of not taking damage from an enemy that you’ve killed – this is typically better than running Darkness Eterball. If you are seriously having a rough time keeping your HP up, running some healing orbs is infinitely more consistent and useful.

Every 8th peg hit gets converted into a bomb

First peg hit gets converted into a bomb

Every 8th peg hit gets converted into a bomb

First peg hit gets converted into a bomb

Every 6th peg hit gets converted into a bomb


This is objectively the strongest ball in the game, hopefully that doesn’t change. 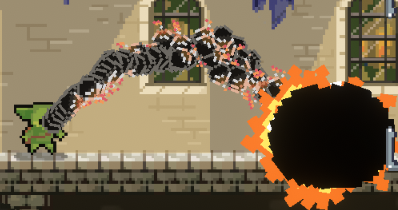 This orb pierces the first peg.

Whenever you heal lost health, deal 3x that much damage to the targeted enemy.

This only works if you’re recovering health, and won’t do damage for overhealing.

Upon reloading, deals 25 damage to all enemies.

Deal 2x damage when your health is below 25%

During navigation, heal 1 for every peg you hit – No damage from misnavigating

This will also heal you for hitting walls and bouncers if you have those relics.

This is either a blessing or a curse. Normally it’s very good, but if you have a lot of junk balls in your satchel then this can make it twice as difficult to hit your powerhouses.

Crit Pegs also refresh the board.

This is a little better than Light Shaft Potion, since Crit Pegs move around and don’t have the ability to get “stuck” in an unfavorable position.

All of your attacks get +

Start each battle with Confusion 4 – Your aim rotates quickly, but you can still control when the ball is fired.

You can’t make any precision shots with this item, but it’s incredibly strong for Multiball builds.

Durable pegs can be hit 3 times.

All of your attacks get +

You are immune to damage while reloading.

Enemies do not get an extra turn on your first reload.

(Red bombs deal 150 base damage to enemies, and 4 damage to you)

All attacks deal 2x damage, you take 2 damage for every 12 pegs hit.

Very strong with Echorb or anything else that can hit all enemies at once.

You can discard an additional orb.

Every 30th peg gets converted into a bomb.

Pegboards start with twice as many bombs.

Pegs can be refreshed into bombs 7% of the time, and all bombs deal 15 less damage. 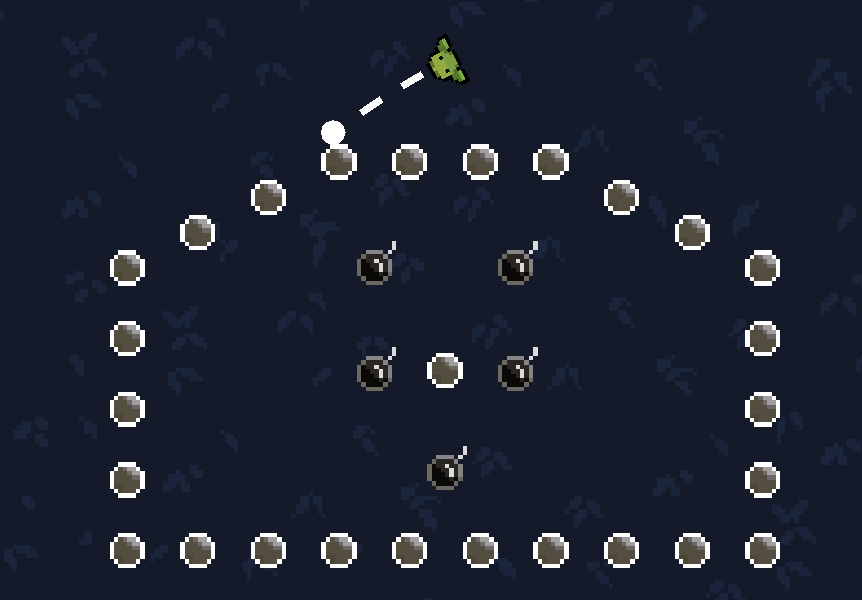 On the Chest Navigation stage, detonating all 5 of the bombs unlocks a BONUS chest.

This only works once per area.

Hope you enjoy the post for Peglin Achievements & Gameplay Tips, If you think we should update the post or something is wrong please let us know via comment and we will fix it how fast as possible! Thank you and have a great day!