Monsters in New World are broken down into five monster families and each one has damage types that they are strong and weak against. You can tell if your damage is strong against your foe because the damage number will be in yellow and there will be an upward-facing arrow next to the number. If your damage is being reduced due to type the number will be blue and there will be a downward-facing arrow next to the number. You can convert any weapon’s damage type to be up to 50% of a particular element by socketing the associated gem in the weapon. There are perks for each of the family types that increase damage against these foes like Corrupted Bane that can be found on weapons. There are also perks that absorb damage from them like Lost Ward . 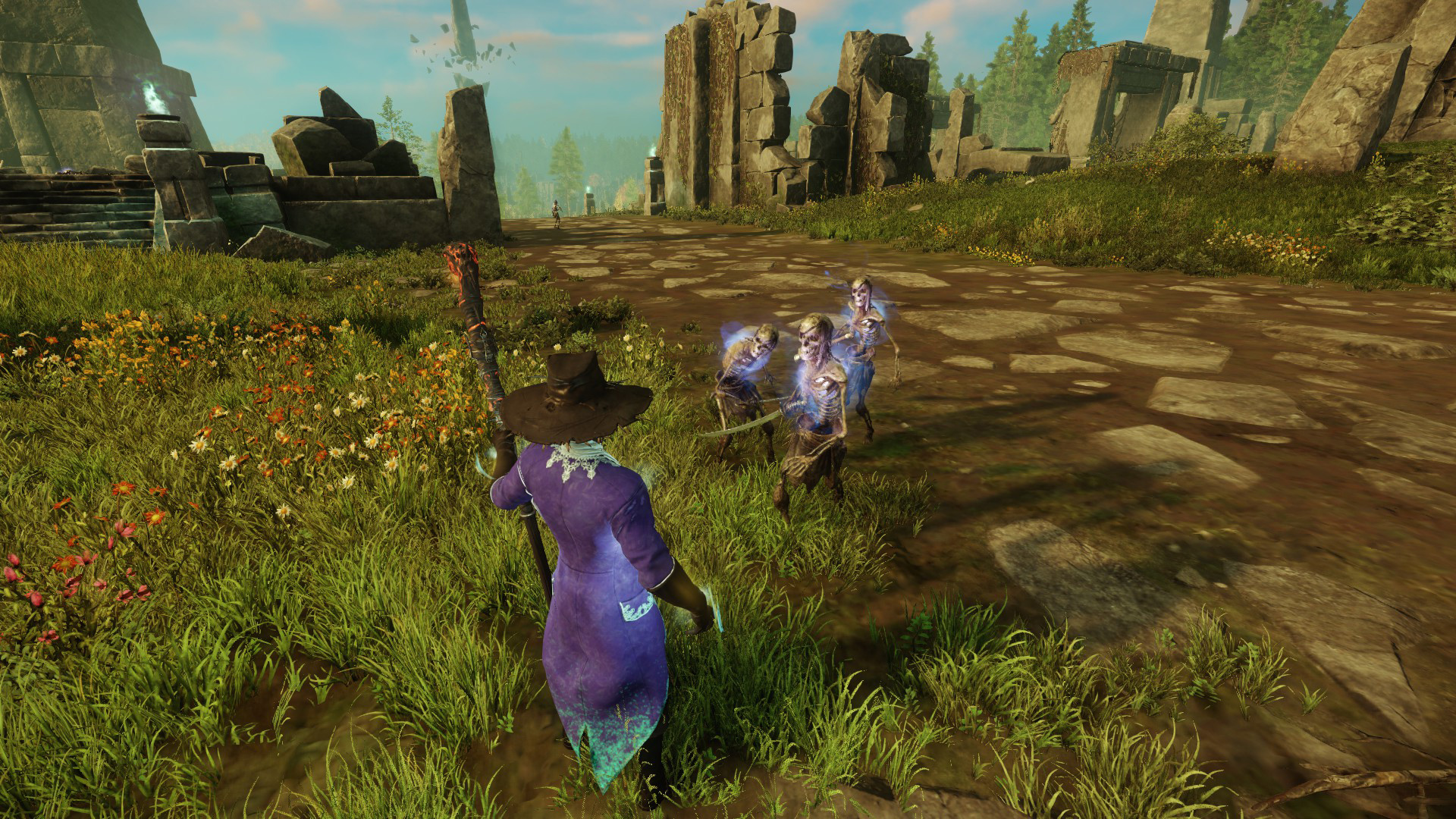 The original residents of Aeternum, the Ancients are represented by the skeletal Ancient Guardians you’ll find surrounding old ruins and other buildings of interest.

They are also the main enemy in both the Starstone Barrows and the Lazarus Instrument.

These monsters are mostly found in or around ancient ruins and can be quickly identified due to their skeletal nature. They take reduced damage from Slash and Fire damage but take increased damage from Strike, Void, and Lightning damage. This makes the War Hammer the ideal weapon for these encounters as it deals all Strike damage. If you are using a Fire Staff, we recommend either partially elemental converting to Lightning damage by socketing a Topaz Topaz gem or switching to a different weapon when facing Ancients. 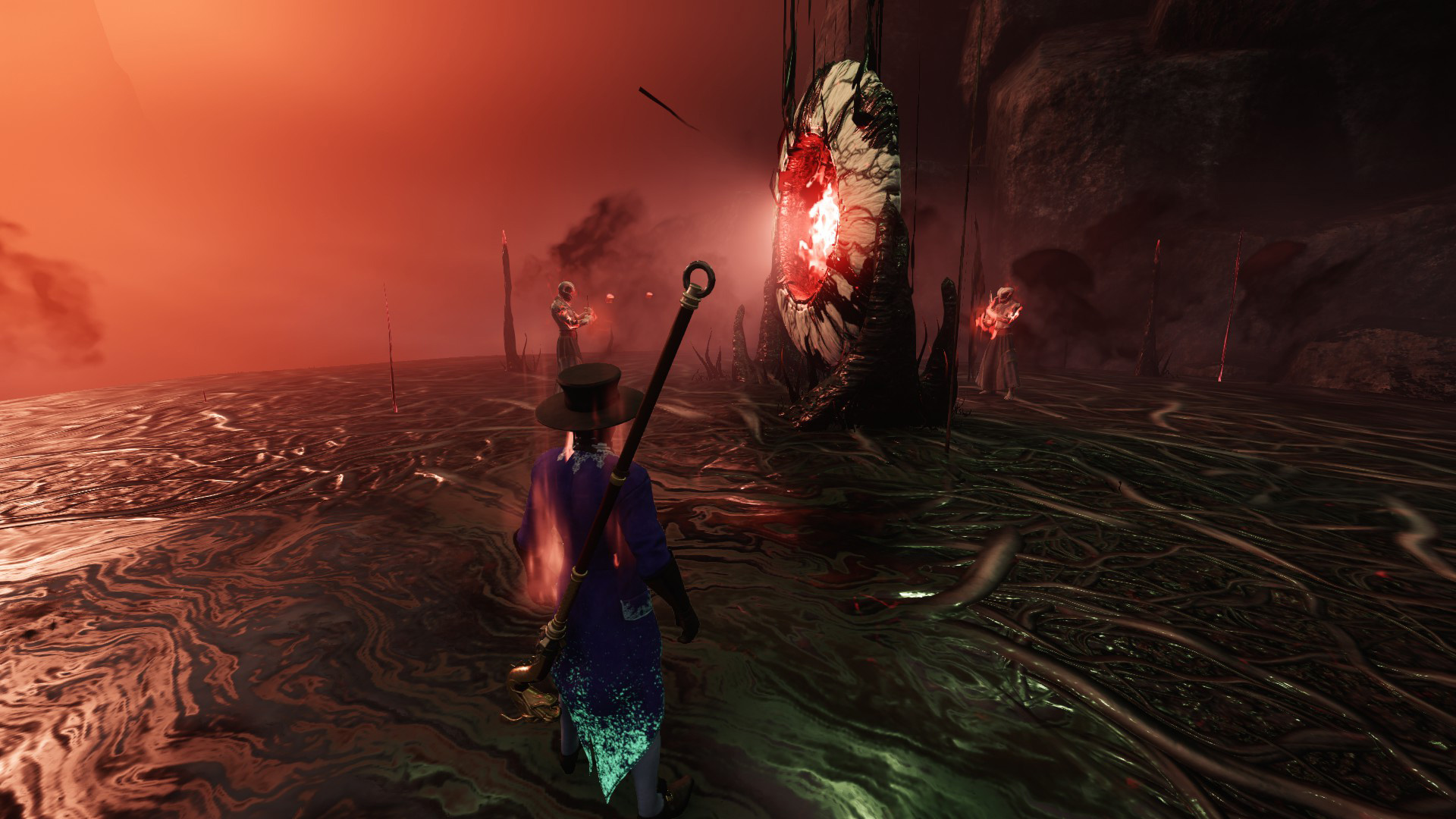 The Corrupted are one of the primary antagonists in New World, and form an important part in the game’s PvE content.

Sprouting up everywhere, you’ll have to band together with friends to take them down, although they can be found in pockets you can take solo – you can identify them by their red coloring.

They also make up the main body of enemies in both The Depths and the Dynasty Shipyard.

You can recognize a Corrupted due to the red theme that always accompanies them. These enemies are fairly abundant in New World and in the story are portrayed as the primary antagonists. There are a lot of different Corrupted foes ranging from mad farmers to fearsome bears or terrifying demons. As you venture further north through Great Cleave and Shattered Mountain you will find new and fearsome Corrupted foes. The city of Myrkgard sits at the farthest north point in Shattered Mountain and is the home base of the Corrupted. If you venture there expect to encounter fierce resistance. Corrupted take reduced damage from Strike and Ice damage but take increased damage from Thrust, Nature, and Arcane. If you are using an Ice Gauntlet, we would recommend either partially elemental converting to Arcane damage by socketing a Sapphire Sapphire gem or switching to a different weapon when facing Corrupted foes.

Areas of high Corruption can inflict Corruption damage to the player. When in these areas a Corruption meter will appear on your screen and tick down over time. Once the meter reaches zero you will take damage and the meter will reset to full. The rate at which the meter depletes will depend on the level of the corruption zone and buffs on the player that help resist corruption. Corruption Tinctures and Elixirs allow you to reset your Corruption Affliction and gain resistance to Corruption for a short period of time. There are also perks that can be found on armor that increase the amount of base Corruption Resistance you have.

There are two Expeditions filled with Corrupted foes, The Depths and Dynasty Shipyard. The Depths has a recommended level of 45 and is located in Restless Shore. You will go through this Expedition as a part of the Main Quest line. Dynasty Shipyard is located in Ebonscale Reach and has a recommended level of 55. Ebonscale Reach is home to several new types of Corrupted foes so be prepared to face a large amount of these within the Expedition. You can acquire a Dynasty Tuning Orb Dynasty Tuning Orb from completing Side Quests in Ebonscale Reach and from the Main Quest Line. 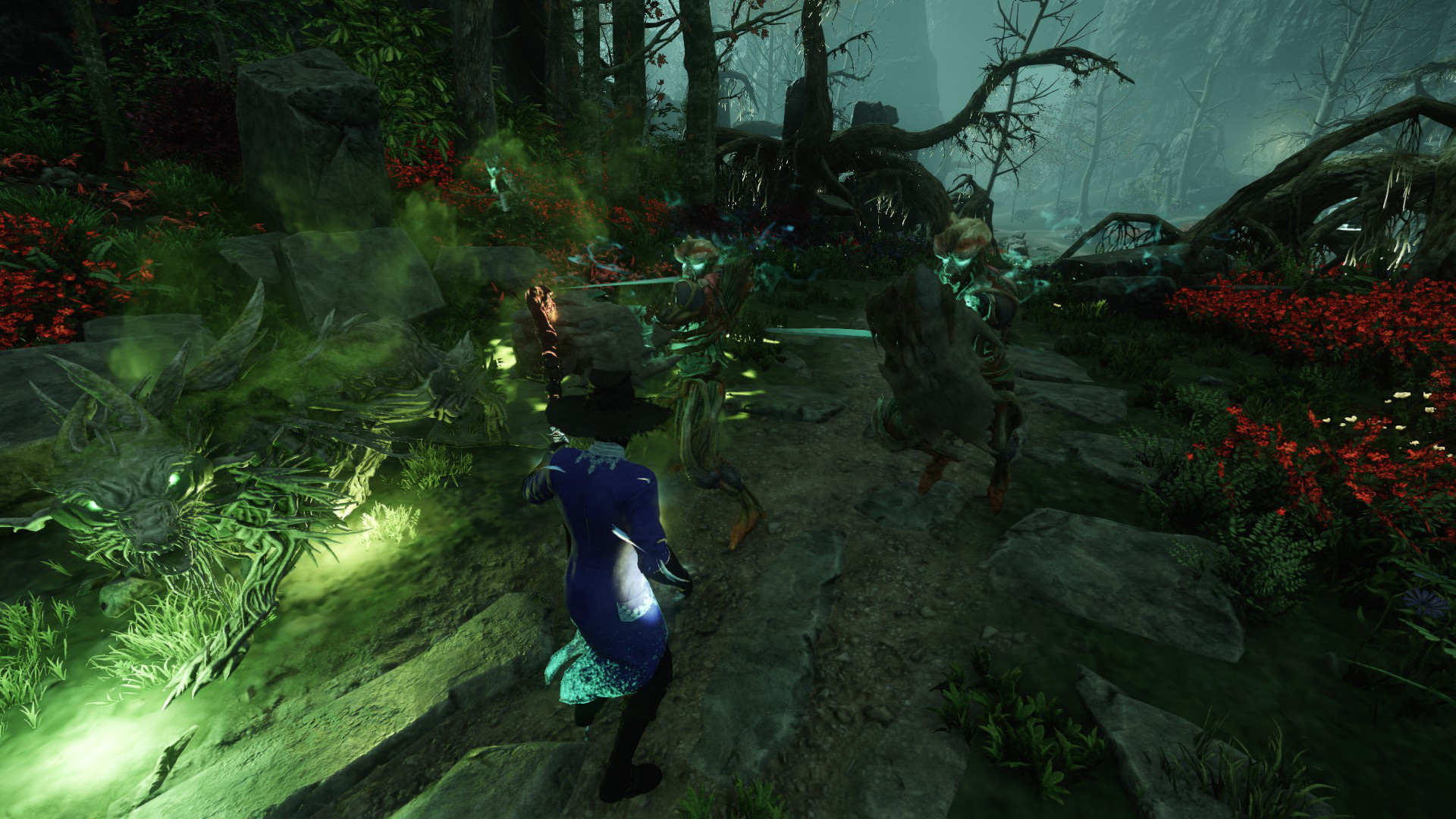 Dryads, terrawolves, and more — the Angry Earth are the dryads of Aeternum, creatures made of wood and other natural elements who consider our presence an infection.

Edengrove is their home territory, but you’ll find them in the Bronzegrove area of Brightwood and in several pockets of Reekwater.

They’re also the main enemy in the Garden of Genesis.

The Angry Earth is the land of Aeternum’s answer to the Corrupted. These tree-like foes are aggressive in their defense of nature. The Angry Earth has also recently started being associated with a disease known as the Blight. Discovering why the Blight is spreading is part of the storyline for the Angry Earth zone of Edengrove. The Angry Earth are also the last monster family that you will encounter in New World as they do not appear until Brightwood. Some Angry Earth foes are able to be chopped up for wood using a Lumber Axe. Angry Earth take increased damage from Slash and Fire but are resistant to Thrust and Lightning damage.

Areas of high Blight concentration, which are typically look like yellow clouds near the ground, can inflict the Blighted debuff on players. When entering one of these areas a Blight meter will appear and tick down over time. Once the meter reaches zero you will be Blighted which is a 3-minute affliction that does some damage over time and drastically reduces incoming healing. It is highly advisable that you avoid being Blighted at all costs. Blight Tinctures and Elixirs allow you to remove Blighted and gain resistance to it for a short period of time. There are also perks that can be found on armor that increase the amount of base Blight Resistance you have.

The Garden of Genesis, located in Edengrove, is the only Expedition to feature Angry Earth foes and has a recommended level of 60 making it an endgame Expedition. The Blight also plays a major role in this Expedition so we recommend that you bring at least a few Blight Tinctures or Elixirs to cleanse yourself of the Blight. Completing Side Quests in Edengrove and Shattered Mountain will lead you to a Quest to enter the expedition. 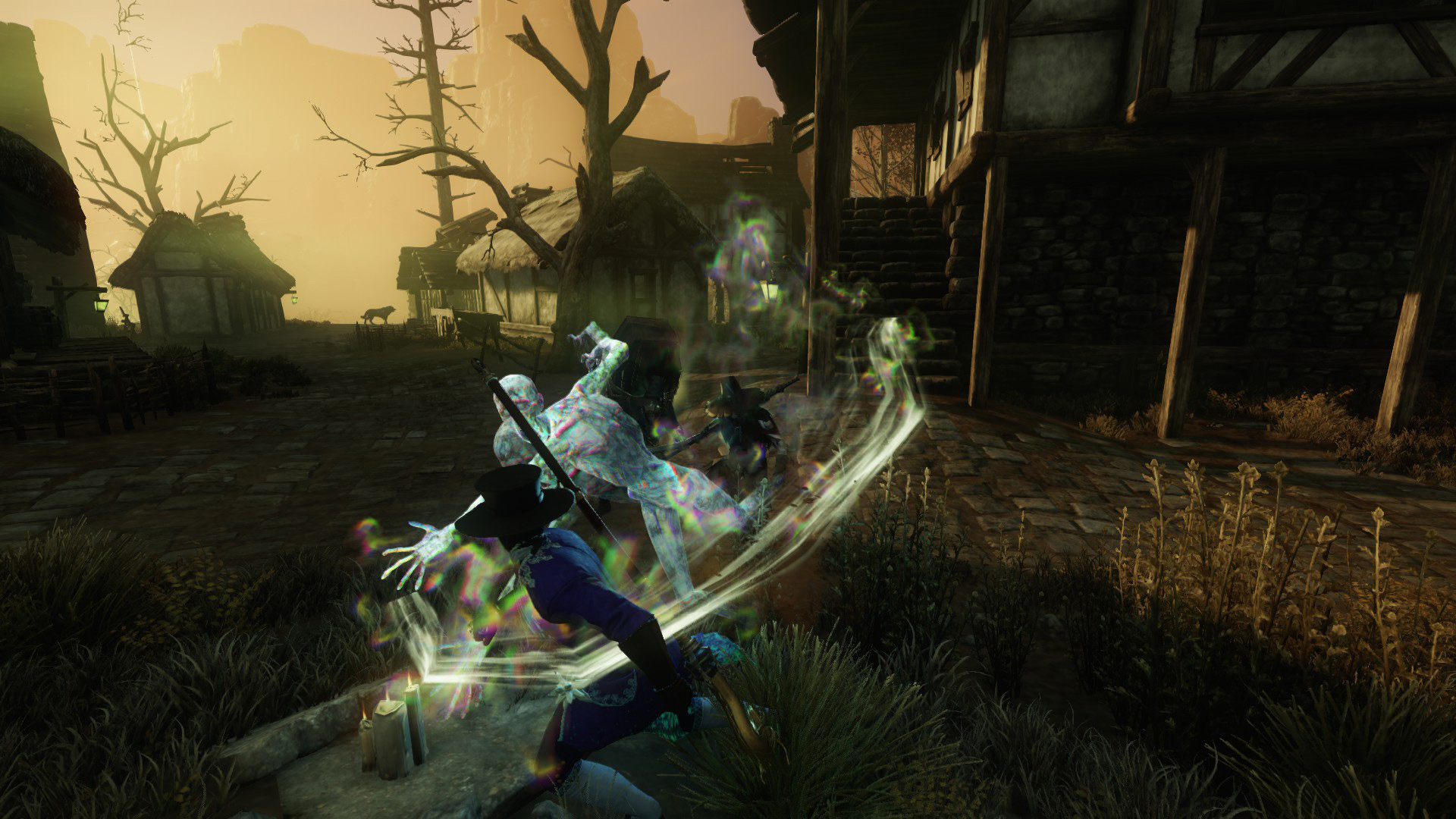 Those doomed to live forever, The Lost are the ghosts, wights, and other undead beings you’ll encounter on Aeternum — including all those pirates lost to the waves.

They are very often in higher concentrations in the regions of Monarch’s Bluffs, Brightwood, Reekwater, Weaver’s Fen, Restless Shore, and Cutlass Keys.

In addition, The Lost are the main enemy in the Amrine Excavation.

The Lost are populated with people who have gone insane due to coming back to life one-too-many times. In New World no one truly dies due to a mysterious power of the island of Aeternum, the land on which the game is set; some lose their minds during this process and become Lost. The Lost feature zombie-like foes and ghosts. They are resistant to Thrust and Void damage, but are weak to Strike, Ice, and Nature damage. The ghost-type enemies can be particularly scary due to their fast movement speeds and ability to have elemental damage attacks that drain your Stamina or stun you.

New World’s first Expedition, The Amrine Excavation, features Lost-type foes. Within the expedition you will fight zombie-like enemies, ghosts, and even large monstrosities. We recommend being at least Level 23 for your first foray into this expedition. You can obtain Tuning Orbs for this Expedition from the Main Quest line and from Side Quests in both Windsward and Everfall. 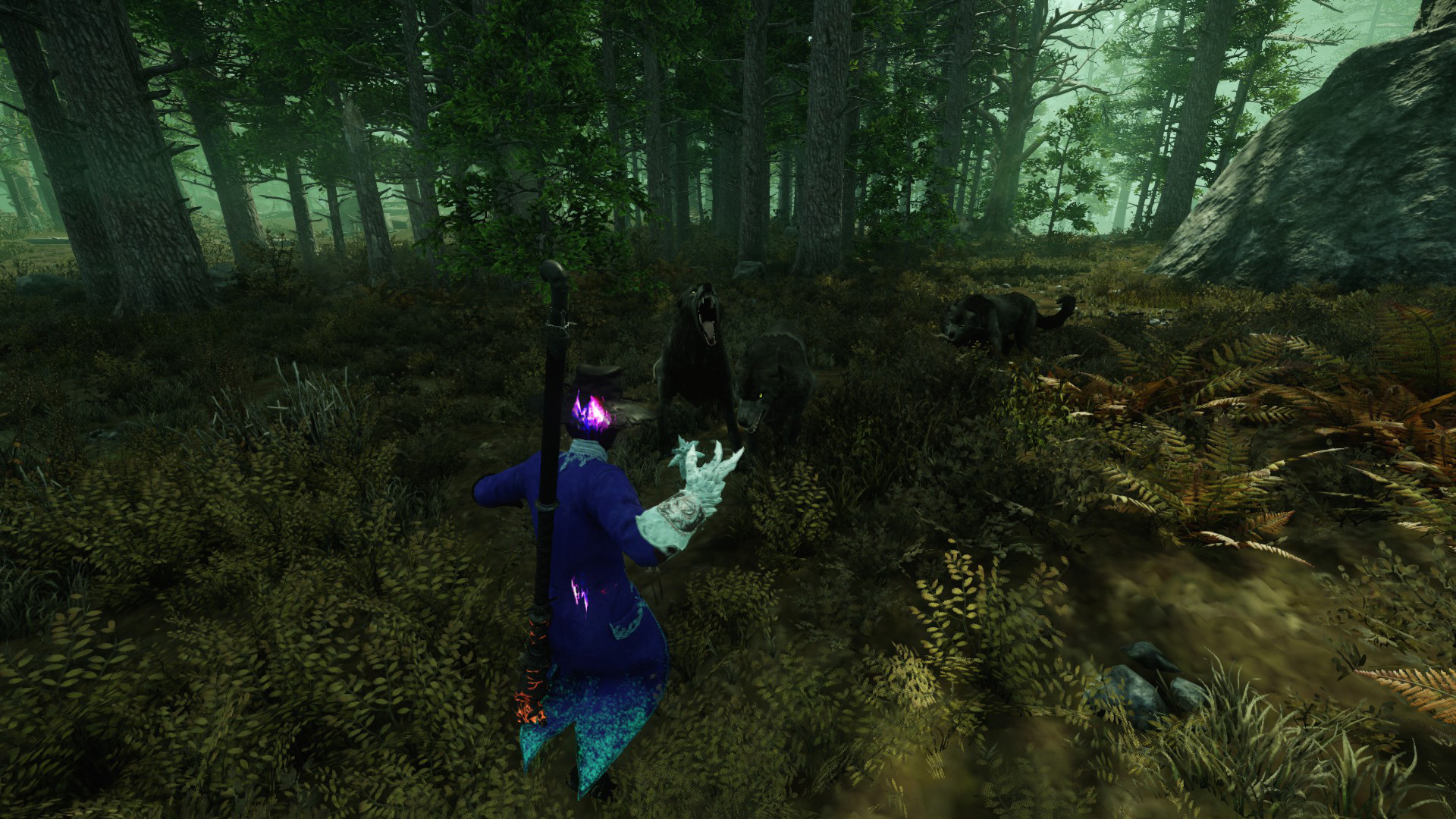 The wild animals of Aeternum, Beasts are found everywhere.

From predators like wolves, bears and wild cats to prey such as turkeys, boar and bison, you’ll find yourself facing off against them time and time again.

Beasts are the natural wild animals that you would expect to find roaming the world in a non-magical setting. Wolves, Boars, Alligators, and Bears all fall into this category. In higher level Territories you can find Corrupted versions of many Beast-type foes, these count as exclusively Corrupted-type and may behave differently than their non-Corrupted versions. They are only weak to Thrust damage and are not resistant to any type of damage.

In addition to enemies’ natural resistances and weaknesses, there are multiple ways you can increase your damage against certain types of enemy.

One of these is by using Coatings on your weapons.

A concoction made through the Arcana trade skill, when consumed they apply a percentage bonus to damage when fighting that type of enemy.

They typically come in four strengths:

You can also craft Trophies with the Furnishing trade skill, that you can display in your home for additional bonuses.

You can use special resources to add perks to your gear that protect against certain enemy types or deal extra damage against them. This is useful to keep in a Storage Shed for when you’re running a particular Expedition.

For example, adding Baetylus when crafting armor protects against the Corrupted, while the Draught of Ancient Essence adds damage absorption against the Lost.

Hope you enjoy the post for New World All Enemies Informations Resistances & Weaknesses, If you think we should update the post or something is wrong please let us know via comment and we will fix it how fast as possible! Thank you and have a great day!