She’s big, she’s wild, and she’s unruly. But, with a lighter touch and a little know-how, she can be a lot easier to drive. Learn how to tackle the Burnet Ferndale without spinning out into a tree!

Land yachting, anyone?
*DISCLAIMER: You don’t have to follow any of this, this is just how I drive the car and I find it rather easy, especially if you’re using a controller. Figured I’d just offer just one way to drive the car. If your way works, use that.* 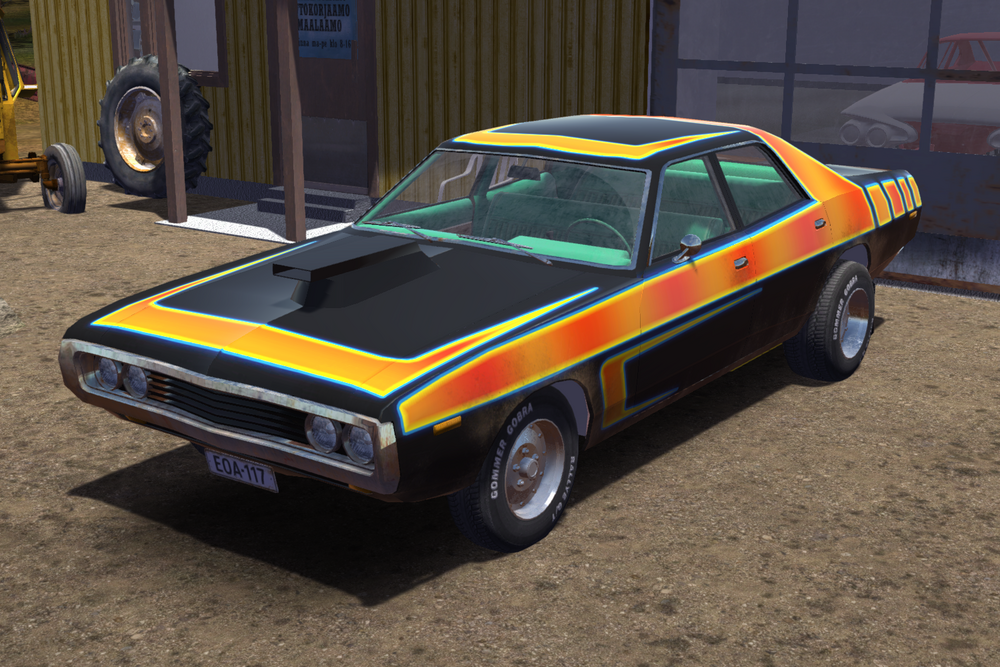 Ah the Burnet Ferndale, everything that was right (and wrong) with American cars of the 1970’s. Big, spacious, comfortable interiors riding on a massive chassis with soft suspensions, and a gigantic, powerful, gas guzzling V8 that would soon be humbled by the looming oil crisis.

Your first exposure to the Ferndale—which is based on the 1973 Dodge Coronet, another car that was bigger than life itself (literally)—will come when you first visit good ol’ Fleetari. After handing over your own pride and joy, Fleetari will offer you the keys to his own baby, the Ferndale. Bask in the glory of its custom Back To The Future inspired paint job, gawk at its massive body, and prepare to be humbled by the car’s raw power.

Once you’re inside you’ll notice the column shifter. What? An automatic car in a game full of manuals? This must be a piece of cake to drive! Not likely to stall, don’t have to worry about changing gears, this is fantastic! But, don’t let the transmission fool you, because you still have to drive on the dirt roads. This is where the first shortfall of the Ferndale comes into play.

The car is powerful. It’s V8, the legendary 440, puts out over 300 horsepower to the rear wheels. That’s good for racing, but when you take traction out of the mix, like on a dirt road, the wheels are likely to spin and slip. Unfortunately, you cannot avoid driving on the dirt roads with this car, gotta get home don’t you? When you first drive this car, you will most likely spin out a few times and you’re definitely going to crash at some point, that’s life. So you will need to learn how to control this car’s power early.

Wait, I thought this was an automatic?

Remember that automatic transmission? Well you’re going to learn how to use it as a manual. HA, you thought you would have it easy? Well don’t fret, it’s a 3-speed transmission and you’re only going to use two of the gears. To start, shift the car into 2, or second gear. As the MSC wiki states, the 1st and 2nd gears—or 1 and 2 as they appear on the column—are usually used for towing heavy loads or racing. When you first get rolling, the first mistake is usually to slam on the gas to get the car rolling. It will spin out. Let the car get rolling on its own, it will crawl as automatics do. Apply a little pressure to the gas and help the car start to really move. Once you’re moving, try to keep the car below 40 mph. If you’ve done that correctly, congrats! You’re now on the move!

You might be approaching a turn now. While this might seem funny to say, do NOT touch the brakes. The Ferndale’s brakes can and will lock up whether you’re doing 80 or 8 mph. It’s important to note that when the brakes lock up you WILL lose the ability to turn. So, time to learn how to use engine braking.

As you’re approaching the turn, downshift the car into first gear and let it slow down before you turn. You could use a tiny bit of braking to help make the turn, but you will have to press them lightly and prepare for the worst, just in case. If you’ve made that turn, congrats again! As you’re making your way through the dirt roads try to keep the car between 2nd and 1st and make sure your speed stays around 40 mph. Now you know how to keep the car under control, somewhat. Be careful and make sure you don’t apply too much power, or any power at all in some cases, when you’re turning as the car is likely to spin out because of the poor traction. Feather the throttle and be mindful of your power.

That’s it. That’s the secret to not spinning out on dirt roads. Simple ain’t it? But it’s still not recommended that you use the dirt roads to get to town with the Ferndale. Thankfully, this car has a license plate and can go through police checkpoints just fine, if you actually decide to stop, so hit the highway.

Now, highway driving is somewhat easy with the Ferndale too. But remember, this is what we call a “land yacht,” meaning this car has some pretty poor handling and turns are still a concern (ha, that rhymed) for the Ferndale. Thankfully, the car seems to have anti-roll bars installed (thank you, Fleetari) so the body doesn’t roll, meaning it’s not likely to lean in a turn. This will help keep the car under control somewhat, but your speed still plays a lot into whether or not you’re going to make this turn.

When approaching a turn on the highway, prepare yourself by slowing the car down. You can get off the gas and let the car coast itself down, or you can try downshifting too. So far it seems like the Ferndale is the only invincible car in the game, as far as the transmission is concerned. I accidentally downshifted from 3rd/Drive into 2nd at 100 mph and the transmission didn’t explode or shred itself into pieces. So you can downshift and use engine braking to help slow the car down, just remember to watch the brakes. If you’re at highway speeds and you hit the brakes, even if you just barely touch them, they will lock up. Remember, you lose turning when your brakes lock up. Even when you get off the brakes the wheels will remain locked briefly, you will still not be able to turn and you might end up wrapping the car around a tree.

Other things to remember

That’s really all I have to offer. Happy driving! (or crashing)

Here we come to an end for My Summer Car How To Drive The Ferndale – Guide hope you enjoy it. If you think we forget something to include or we should make an update to the post let us know via comment, and we will fix it asap! Thanks and have a great day!