An official overview of game mechanics

Characters in Mutagenic each have their own specific starting stats, and a starting skill. They can be unlocked via completing the objectives located in the Codex.

Scaling all the things

Every unique source of a stat in Mutagenic is multiplicative with each other. For this reason, even finding small sources of upgrades (eg. 3% -> 5% damage) on an Implant will have massive increases in your damage output.


There is plenty of opportunity to create absolutely crazy builds, so if minmaxing is your jam, this should scratch that itch.

In Mutagenic, there are a variety of Skills and Items which can be found. These are obtained through leveling up, opening chests, and killing enemies.

Skills are your primary damage and utility. There are projectile and area of effect skills, which can be scaled through a variety of means.


Skills are autocast, so you just need to focus on looting and dodging.

Items are your primary source of stat increases. They directly affect the effectiveness of your skills, so make sure you pick ones that synergize!

Every item in the game can be equipped with an Implant. Implants are item and skill customizations, each having a unique set of powerful effects. Implants are found in chests and by killing enemies. 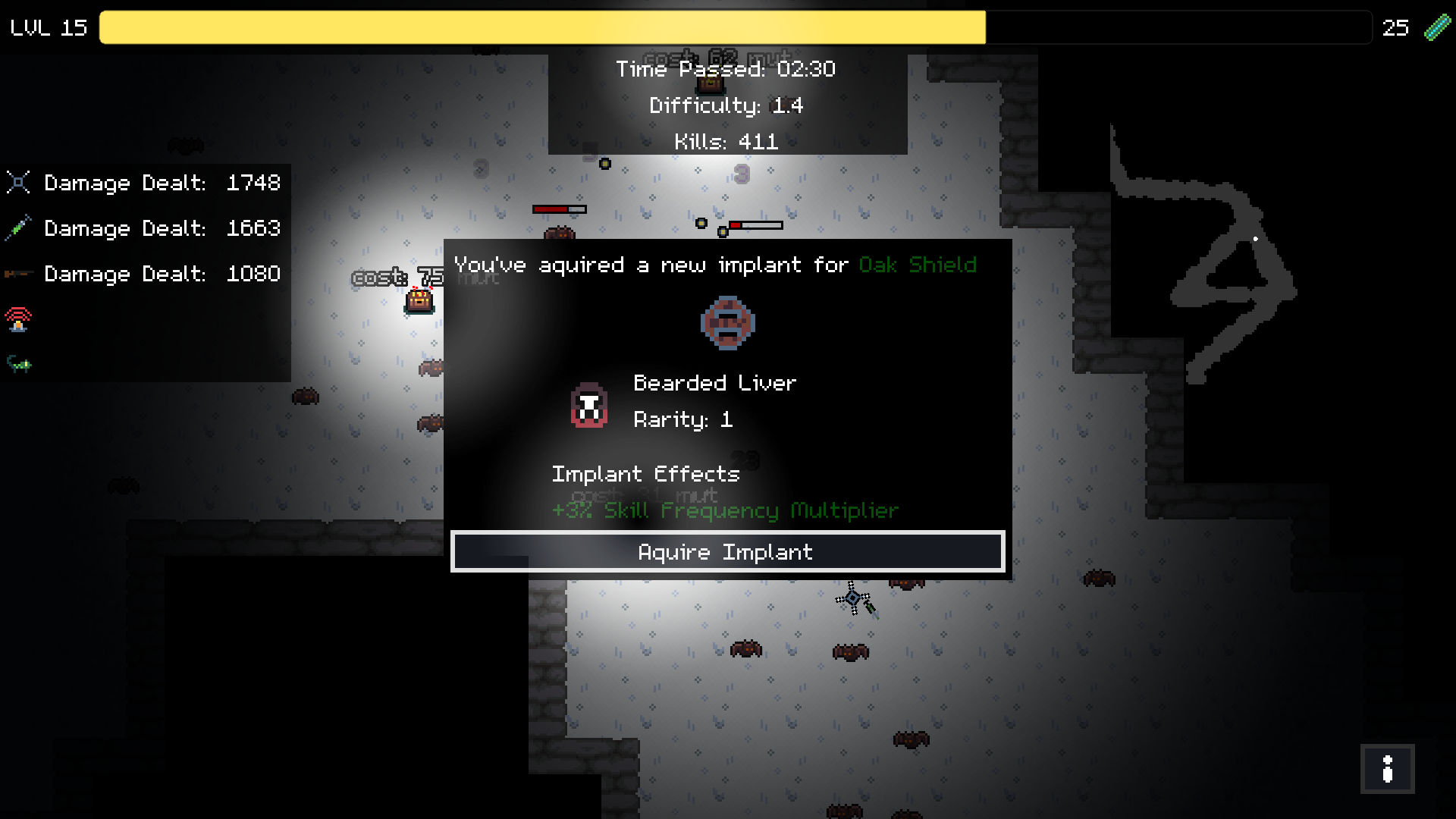 Implants which affect skills will only affect that particular skill, and will modify the base stats of the skill.

Implants which affect items will affect all skills, and will increase with each tier of the item. Implant effects stack multiplicatively with all other stats on the item.


is the main currency/collectible in Mutagenic. It’s primary purpose is to buy mutations for your characters, providing them powerful upgrades for each run. Mutagen can be found by killing enemies, or disassembling unwanted Implants. 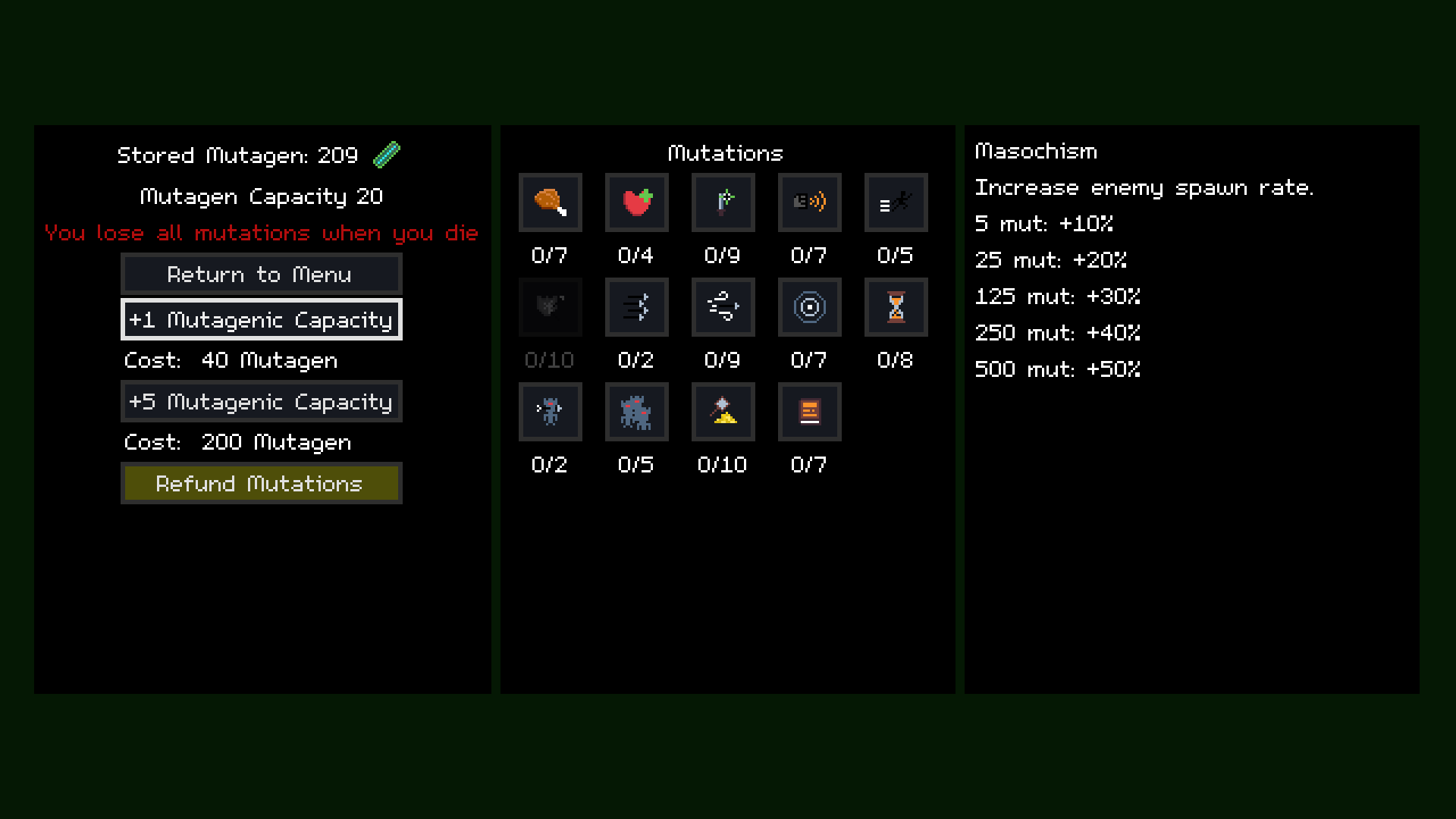 
Mutagen capacity determines how many mutations you can apply onto your character. You can increase this by spending Mutagen to purchase more capacity.


Each tier of mutation costs more than the one before it, so make sure to prioritize upgrading this!


Mutations only apply to your next character playthrough, so spend it wisely!

There are currently 4 base levels in Early Access, and they have the following loot settings:

Normal enemies can drop body parts (base +5 mutagen), or a single mutagen (base +1 mutagen). These base numbers are multiplier by the level Mutagen Drop Multiplier, as noted above.


Elite enemies can also drop strong mutagen (base +5 mutagen), which are further scaled by Game Difficulty, but will stop scaling past 20 minutes.


Implants currently have 3 rarity levels, which allow the implant to roll either 1, 2, or 3 mods.


Furthermore, every mod has 3 quality tiers (T1, T2, T3) which it can roll from, higher tiers noting stronger effects. The availability of mod tiers is dependent on the level, as noted in the Levels section above.


Implant tiers are all equally likely to roll, but only tiers enabled by the level settings can roll.

Hope you enjoy the post for Mutagenic Game Mechanics Overview Guide, If you think we should update the post or something is wrong please let us know via comment and we will fix it how fast as possible! Thank you and have a great day!