In my first play through, it soon became apparent to me that I would need to gear-up with the best possible armor and weapons before descending into the lower depths! But how do you get the materials needed to make the gear before you can safely hold your own and mine them? Money or “Tenergy Shards” as they’re called, (Ts) is what you need… In this guide, you’ll learn a few basic tips and tricks to help you gather materials safely and efficiently and what types of items to be looking for and how to obtain them and use them to your best advantage early on in your game progression. In addition to the “Do’s” of the game, I’ve also included a few pain-saving “Don’ts” in the guide…

It’s not the ONLY solution! — it’s just what I did…

1.) Start picking and hoarding up flowers. You’ll need them for ‘Beehives’! You’ll want to start setting them up asap! The more you have the more money you’ll make… 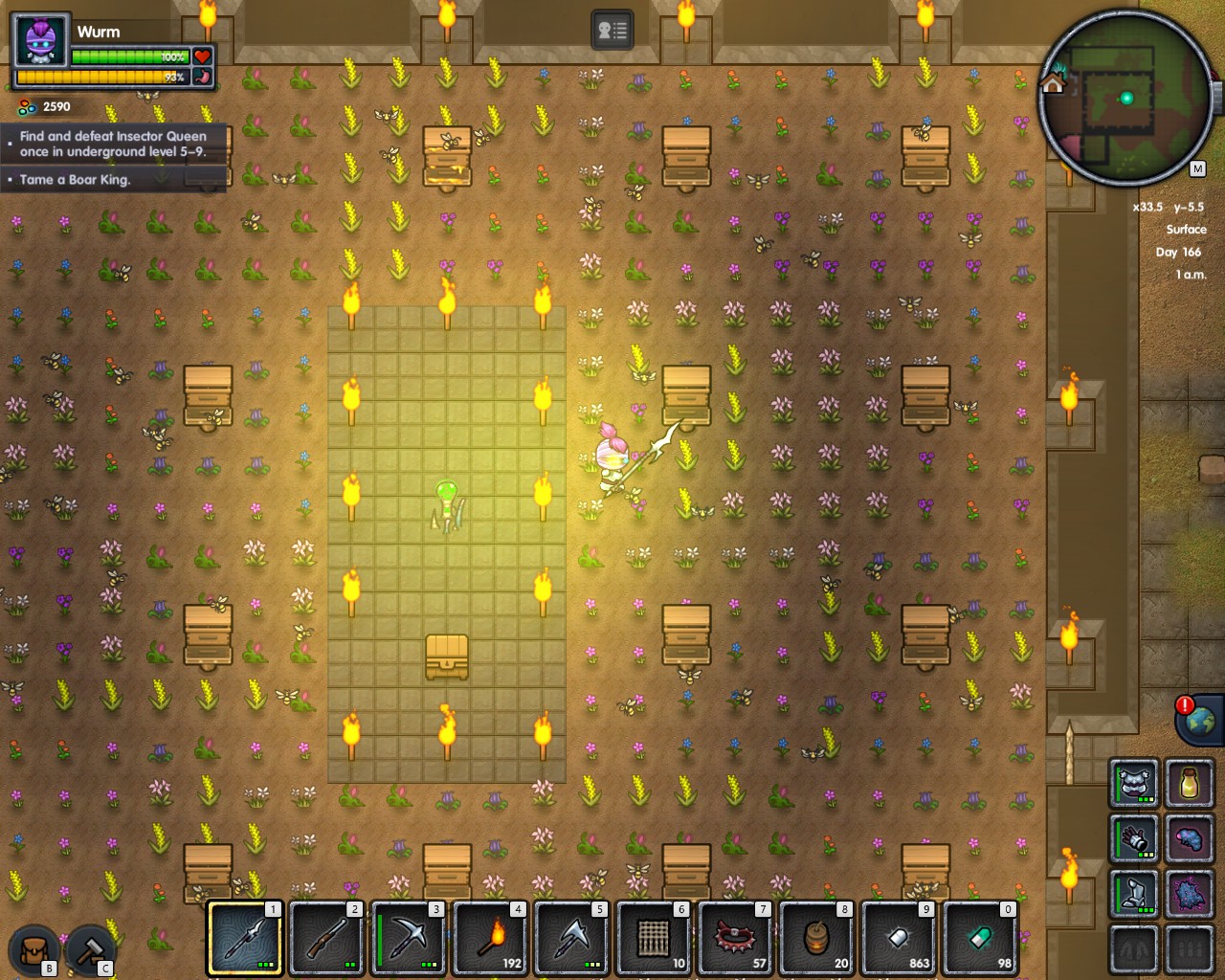 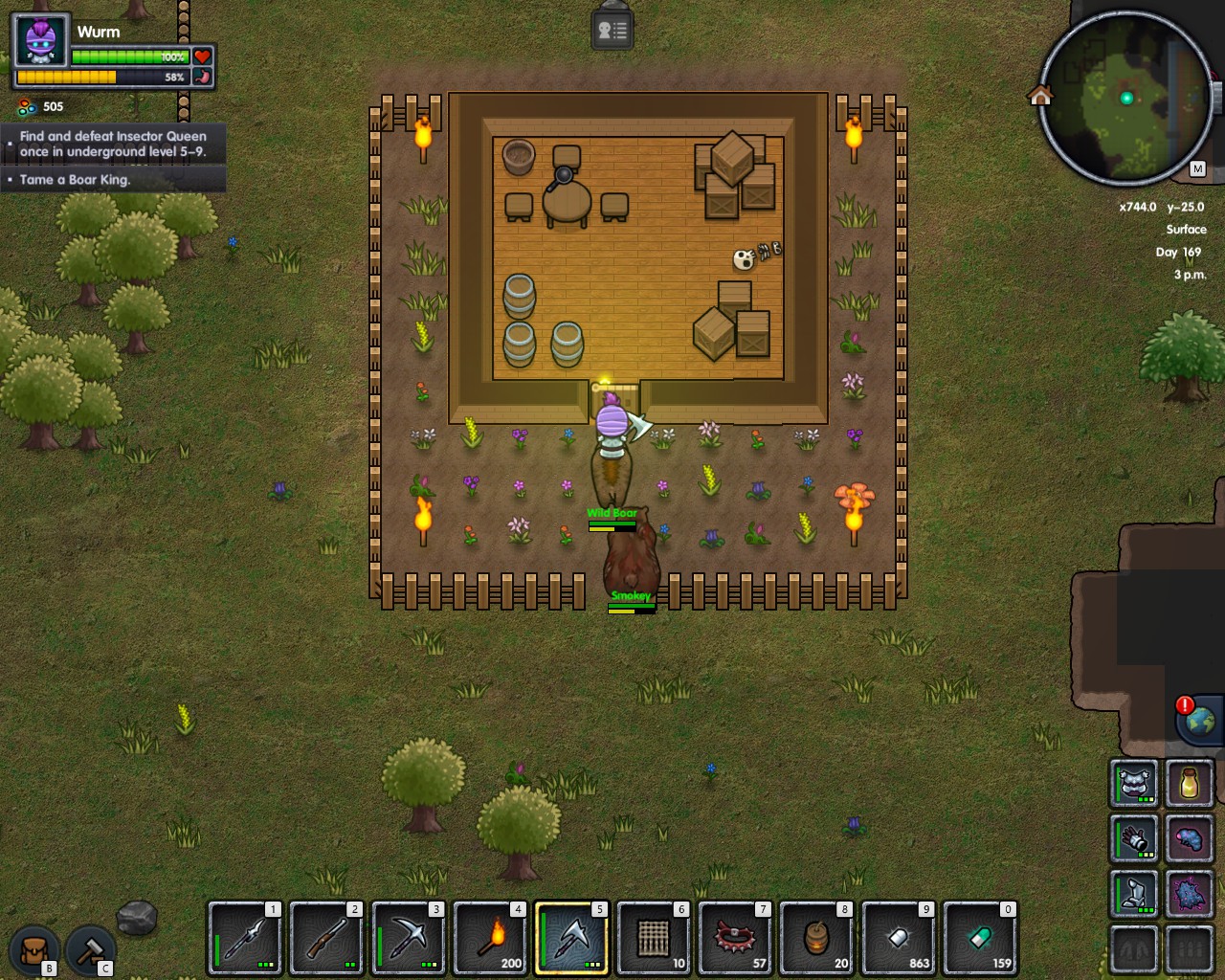 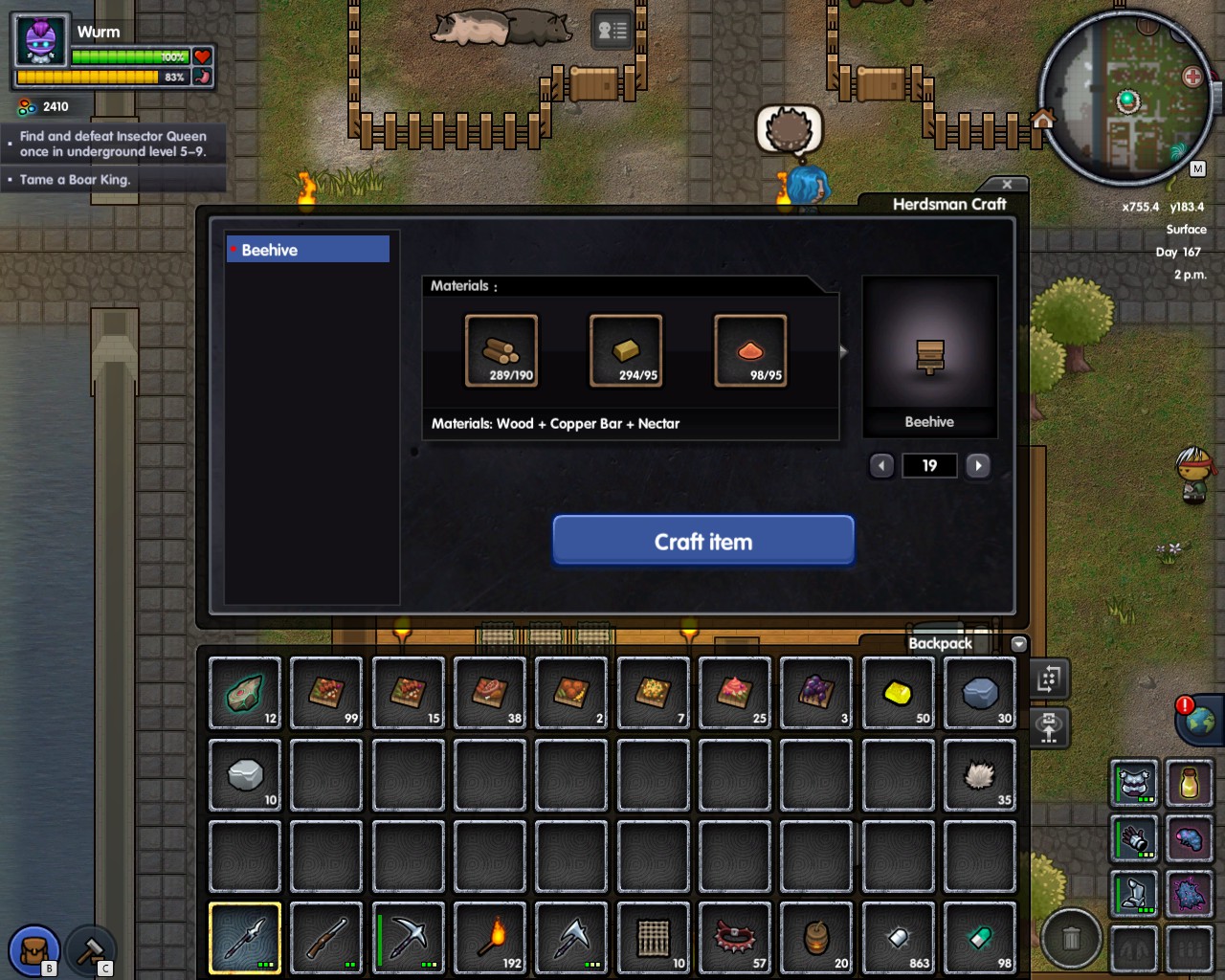 2.) Go see the ‘Herdsman’ npc –This requires a bit of exploration to find one: Click on him to buy some ‘Beehives’. I bought a few at a time to get started but for the complete farm setup, I used 20 in all… With them all set up and flowers planted around them (24 flowers each x 18 Beehives =432 flowers all totaled.) the Bees will collect Nectar for you …Just under 200 Nectar every 2 in-game days! –Or about every 10 minutes in real time… 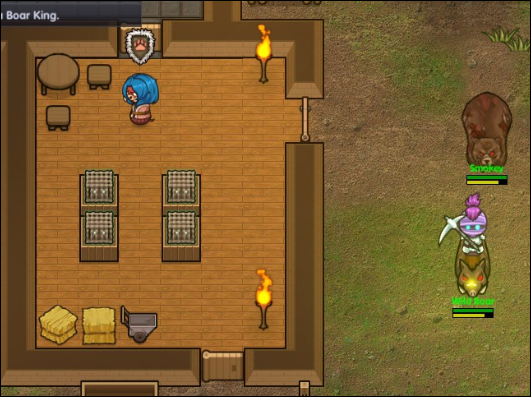 3.) Sell the Nectar to Schip @Schip’s Lab in the 5th dimension. Use the Teleporter to go there. It will earn you around 2040 Tenergy Shards each time! Plenty of coins to buy stuff with!! As a matter of fact, Schip has some pretty nifty stuff to sell, himself. And sometimes he even has ‘Explosive Barrels’ and Pet ‘Collars’!! 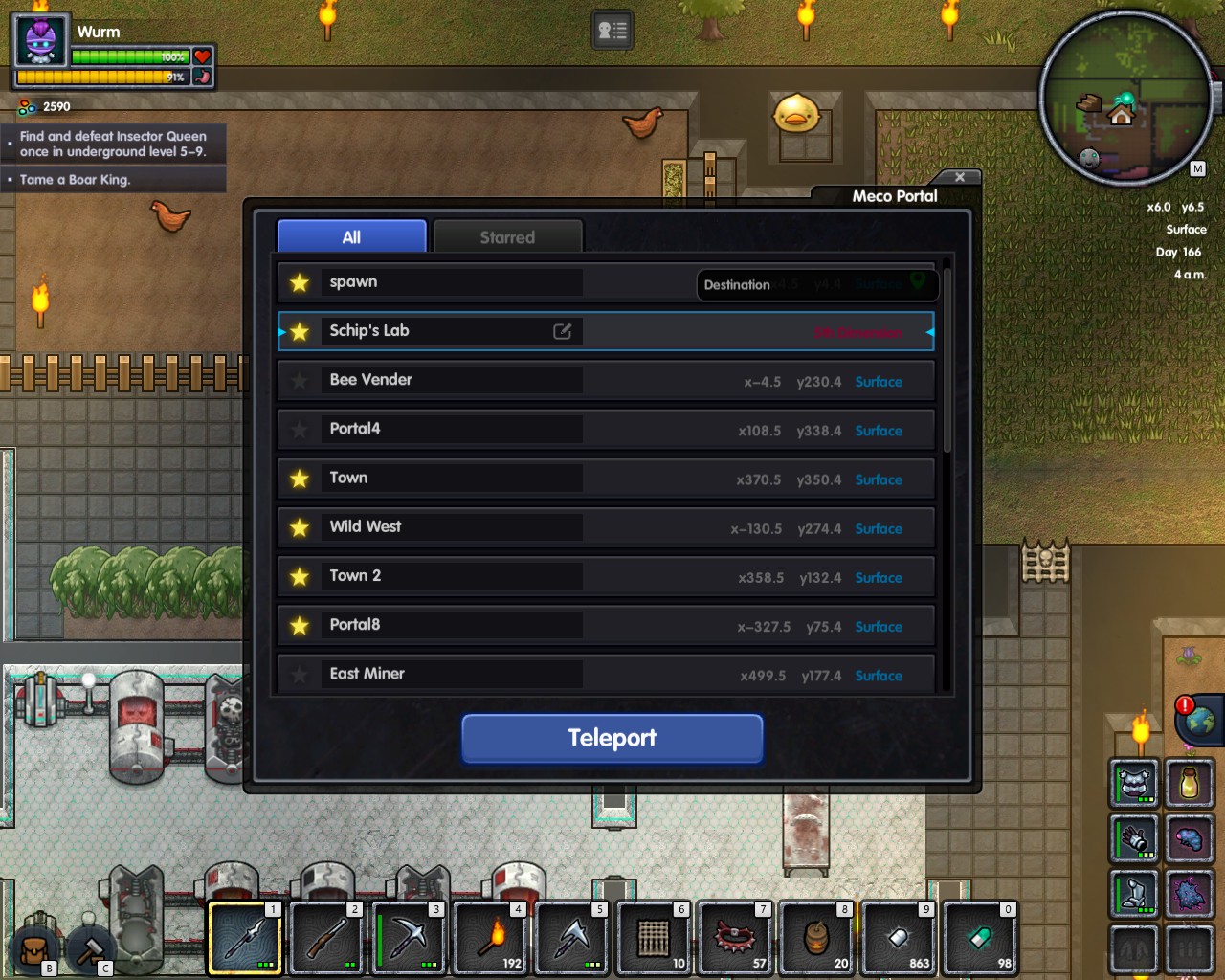 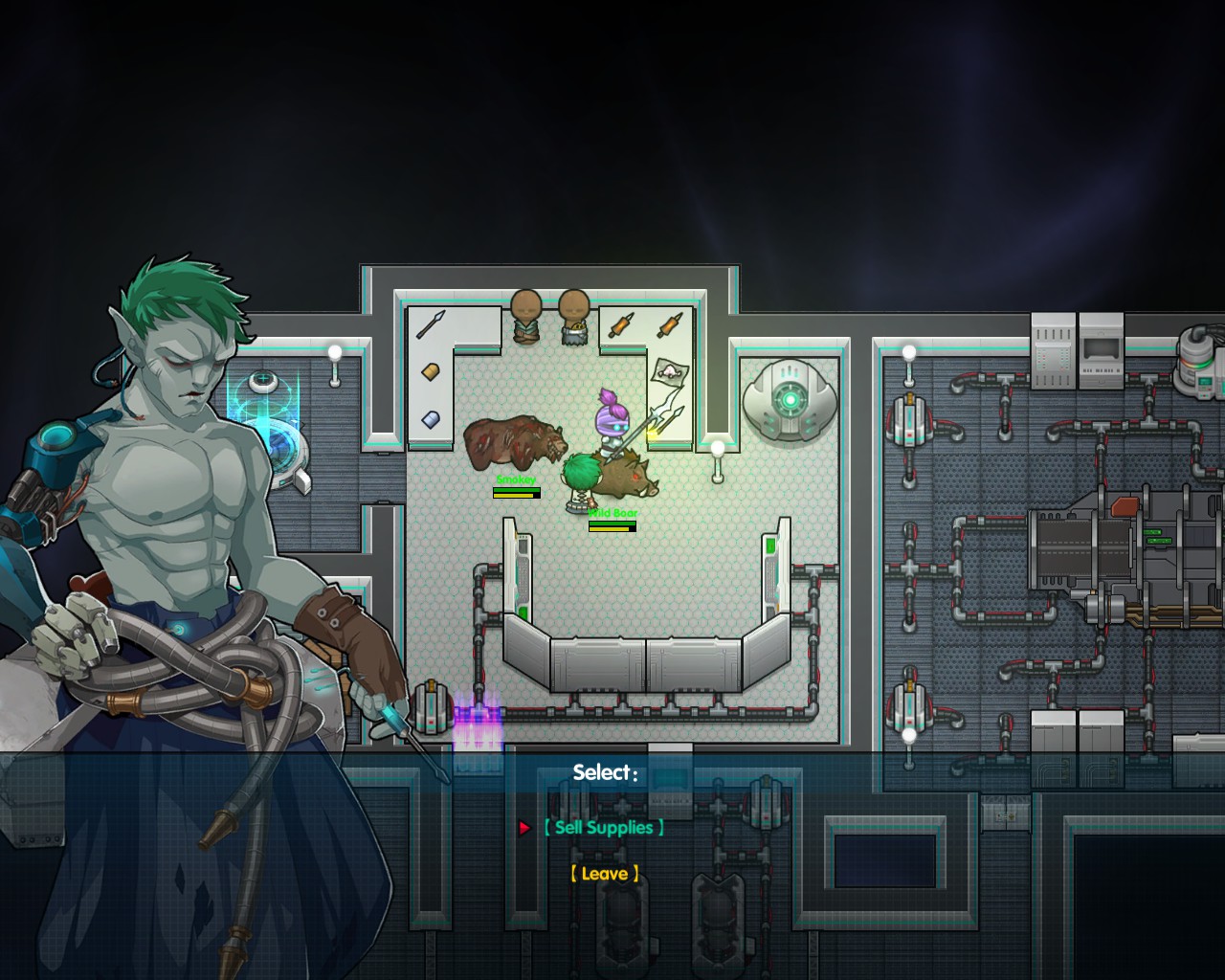 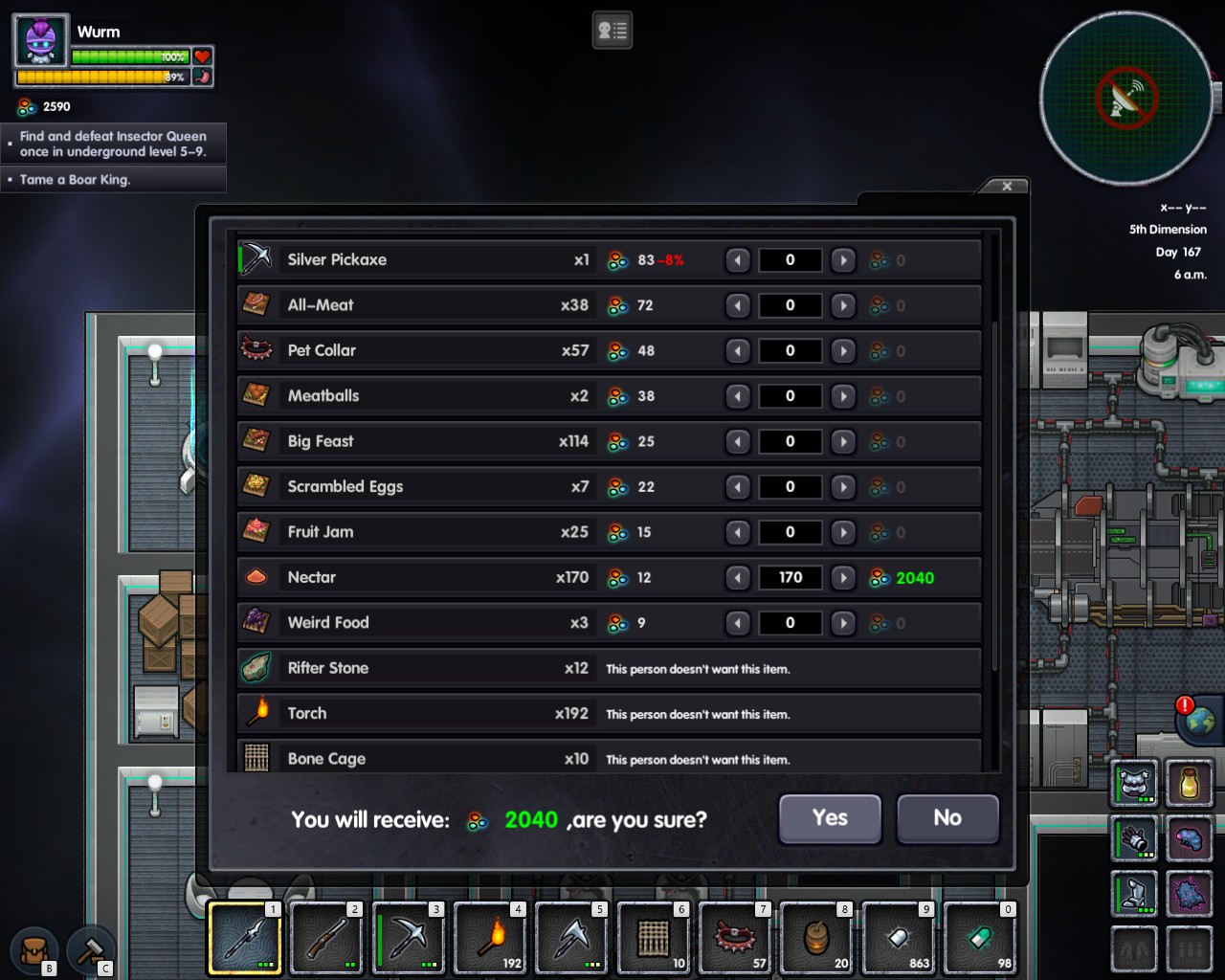 More on that later… but for now you’ll want to buy Ores, Sulfur, Weapons and Animals –but DON’T BUY ‘Saltpeter’!– You can make it yourself with dirt and that’s free! You can even buy props and decorations for your base too. And to buy all of that wonderful stuff you’ll need to discover as many ‘Human Villages’ on the map as possible and then use the heck out of the Teleporter to visit them all and keep buying up all the good stuff from the vender npcs there.

4.) There’s a bug in the mob spawning mechanic of the game:

Mobs tend to spawn in your base… No matter how well lit up the area is they’ll just keep spawning in there… When they do, you do NOT want to fight them around any of your crops/flowers! Or they’ll pull up your flowers and/or crops AND you’ll need to pick them up and replant them when that happens. The best thing to do is lead the mobs out of there away from your flowers/crops to a clear area where you can kill them without messing things up! There’s a lot of work to be done without having to re-do anything!To Keep your Bees working at full efficiency always lead the mobs away from them to a clearing before fighting them…

Also, while visiting the Herdsman: 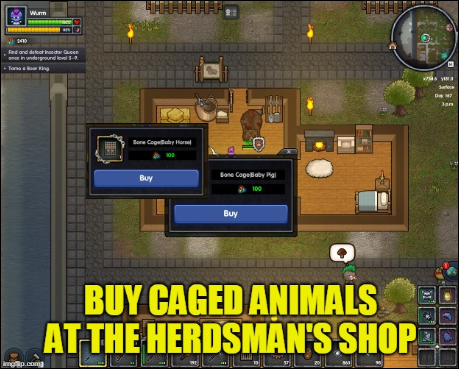 5.) Buy cages of Animals for your farm… They’ll be plenty of mouths to feed and the more you feed them, the more they’ll multiply!

What to feed them:

6.) Save yourself a lot of extra trouble: ONLY feed Farm Animals Grass! About 100/200 grass per ‘Feeding Trough’ and you’ll only need about 5 Troughs –One for each of the five types of farm animals, namely; chickens, goats (that drop lamb’s meat), pigs, cows, and horses! — For a total of 500/1,000 Grass every time you want them to multiply. It’s the Only reason for feeding them… as they won’t die if you don’t feed them! But I feed them/multiply them all at the same time…

Remember, if you don’t feed them they won’t die.

7.) Plant your lawn… Holding down the Left Mouse Button while you move your mouse will plant it (or anything) pretty fast. Grass is WAY MORE plentiful and easier to obtain than Coal… Coal is best suited for fuel in ‘furnaces’ and ‘Stoves’. It is NOT an ingredient in ‘Gunpowder’ as logic would dictate in the real world …so just use it for fuel. 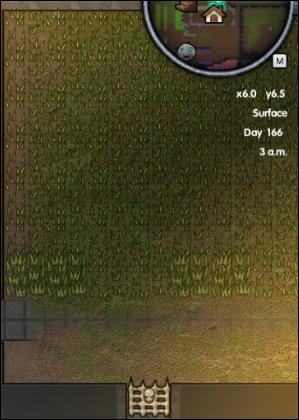 8.) Use a ‘Goblin Bonedagger’ to cut Grass… It’s the quickest and most efficient way to do it and it won’t waste the durability of your good Tools or Weapons. Any cheap Bone Dagger will work and they drop pretty often! Hoard up Grass Seeds and Grass! You’ll also use a lot of Grass to make Torches!

9.) Some of the Goblins drop ‘Pet Collars’! Collect as many as you can…

You’ll NEED them to tame your pets and once you tame them you can ride them AND they’ll even tank for you! It’s how I beat the infamous ‘Angry Coopapa’ bird mini-boss! And how I eventually defeated the ‘Goblin King’ wining me the artifact needed to unlock ‘The Goblin Workbench’!! 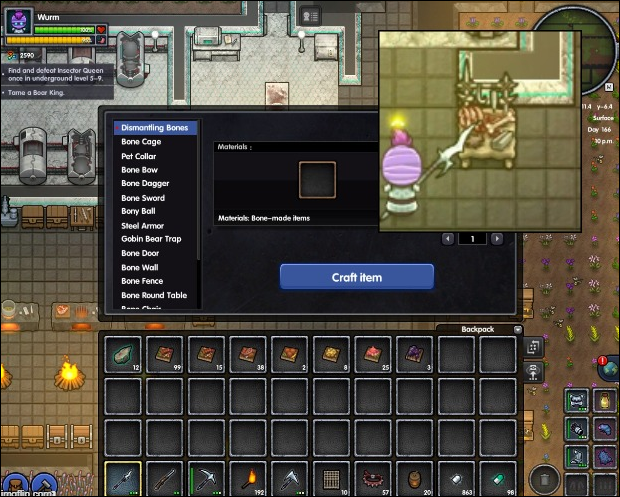 10.) SNEAKY! SNEAKY! When you do go underground you’ll inevitably encounter any of the numerous ‘Goblin Villages’ down there. They ONLY exist down there! When you do come across one, don’t try to take on the ‘Goblin King’ just yet… He’ll be quite difficult at this early stage in your game progression! And if you aggro him just remember where you leave him at, that’s where he’ll be waiting for you until you return. There’s no resetting him at all… But rather sneak around building up walls of partition to divide your enemies up and get them isolated for easy pickings! This will work on them but it will not work on the boss as his attack breaks stuff and tears down all those wonderful walls… 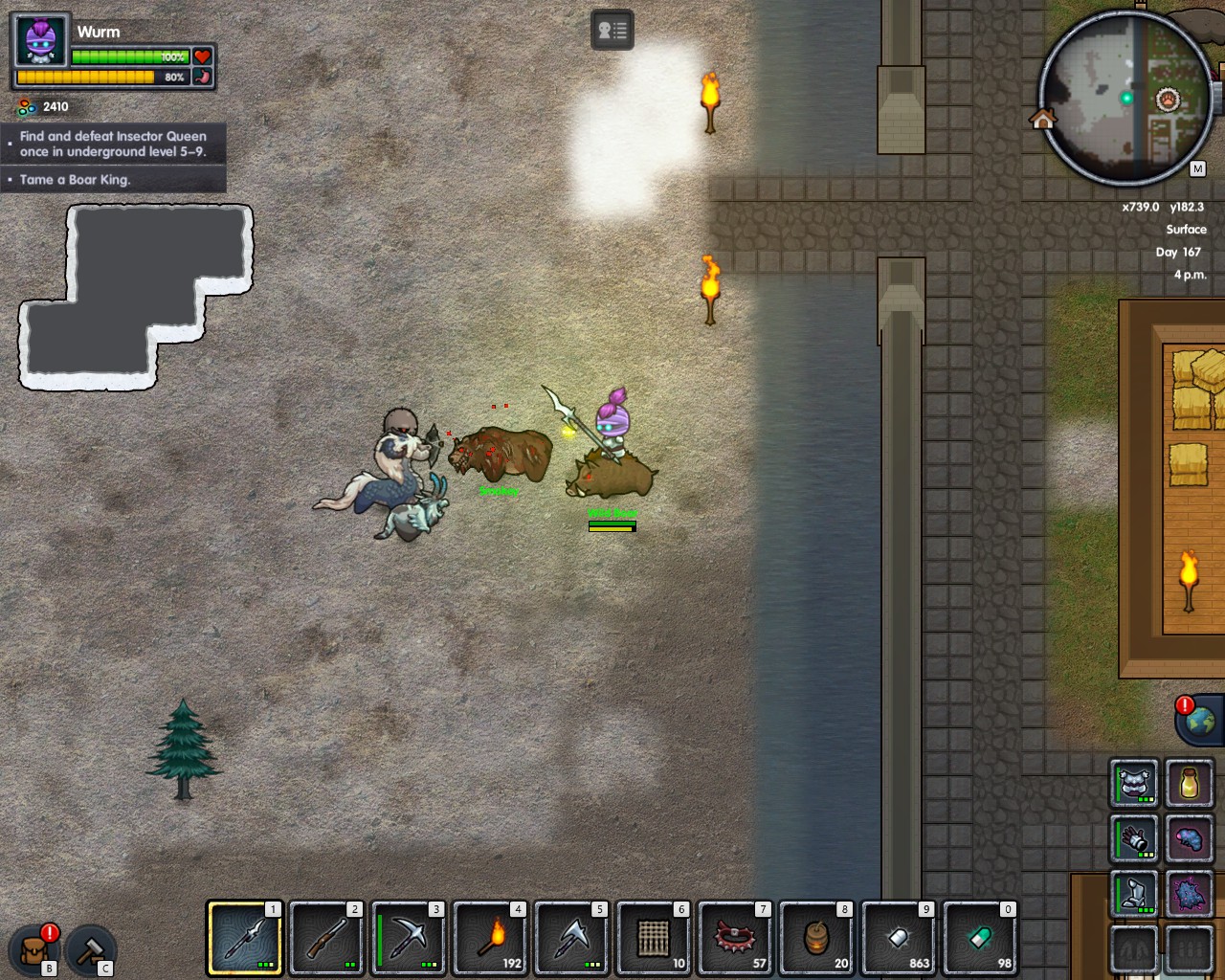 So get the Pet collars then go tame some mobs! In taming there’s almost always the chance that it could fail. Some aninmals have a 100% chance to tame but not all of them! So, you’ll go through a bunch of Pet collars! Once a tame succeeds you can use your newly acquired friend to help you tame even more aggressive mobs and eventually use them to defeat bosses!

12.) You can have as many pets as you can tame but you can only get one of them to follow you at any given time. To benefit from the use of more than a single pet –Mount one, and set another to follow… as you can only use two pets at a time! 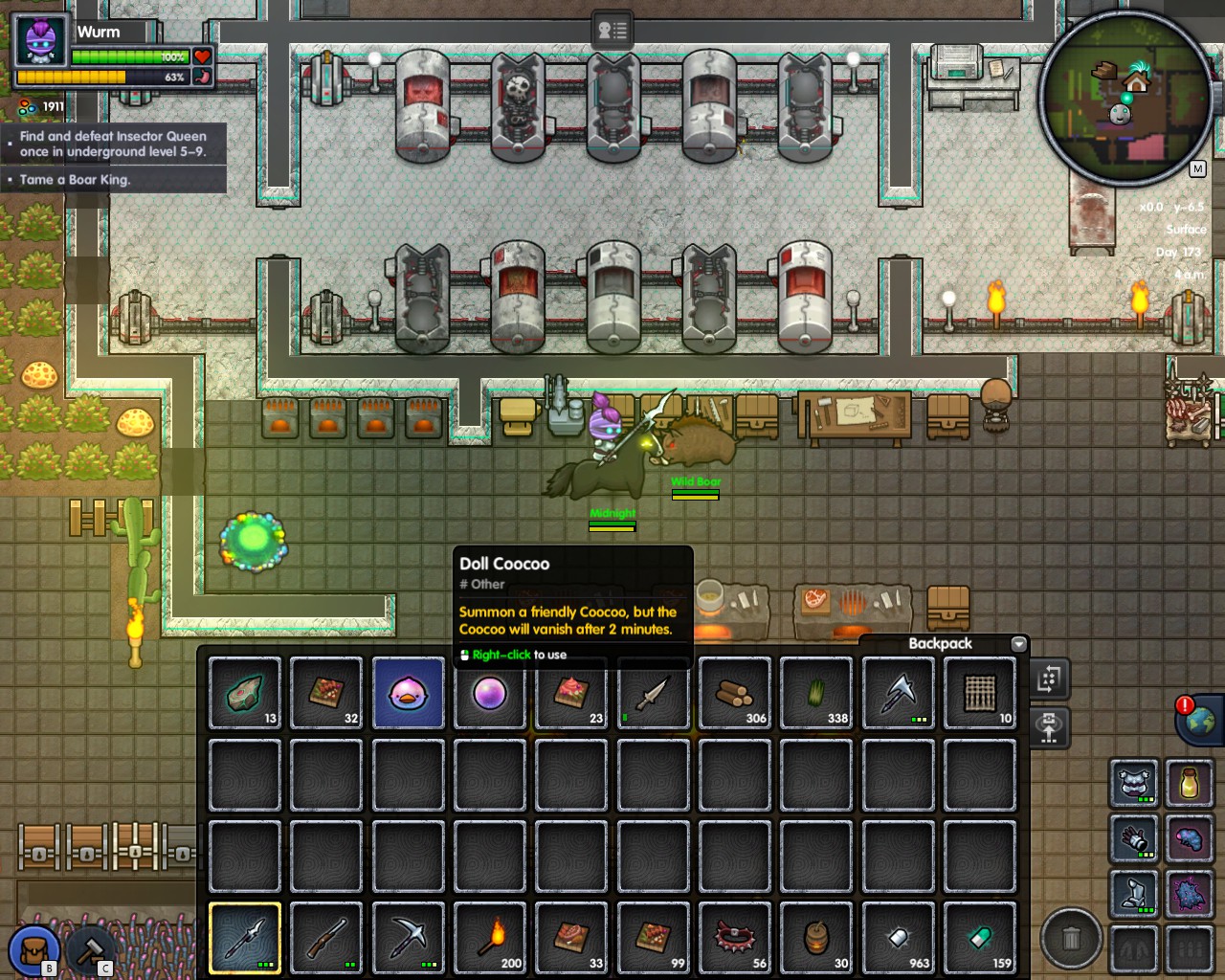 Caring for your pets:

13.) Pets, unlike the Farm animals have a 300x multiplier on the Satiation of their food which means you can feed them a couple apples or some Scrambled Eggs to fill their hunger bar. The Scrambled Eggs has a nifty modifier on it that lowers the their hunger rate by 35% so they don’t get hungry too soon or too often! 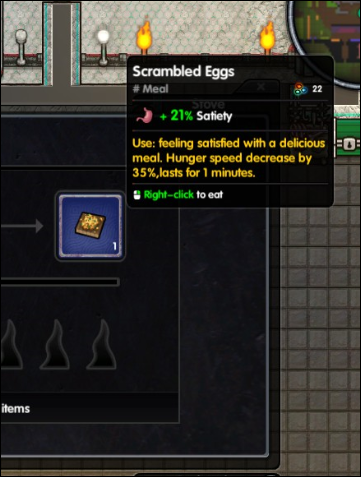 Note: You’ll need to Roast the eggs over a campfire before you can scramble them on the stove.

When your pets start ‘Bleeding Out’ don’t panic you can heal them just by Right Clicking on them but once they’ve been revived you’ll need to feed them right away or the next hit they take will have them ‘Bleeding Out’ AGAIN! You can in fact feed them and heal them while they are engaged in battle! 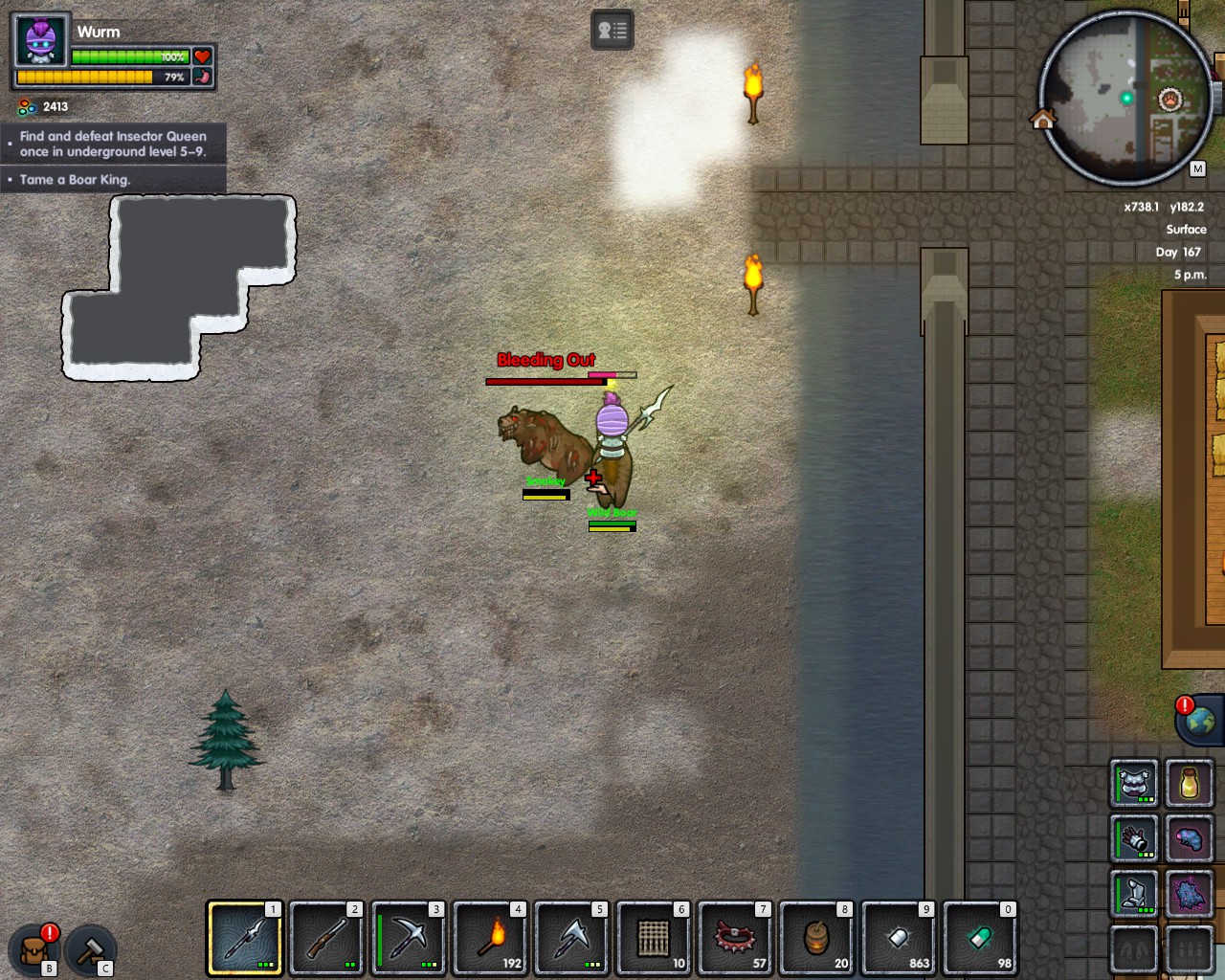 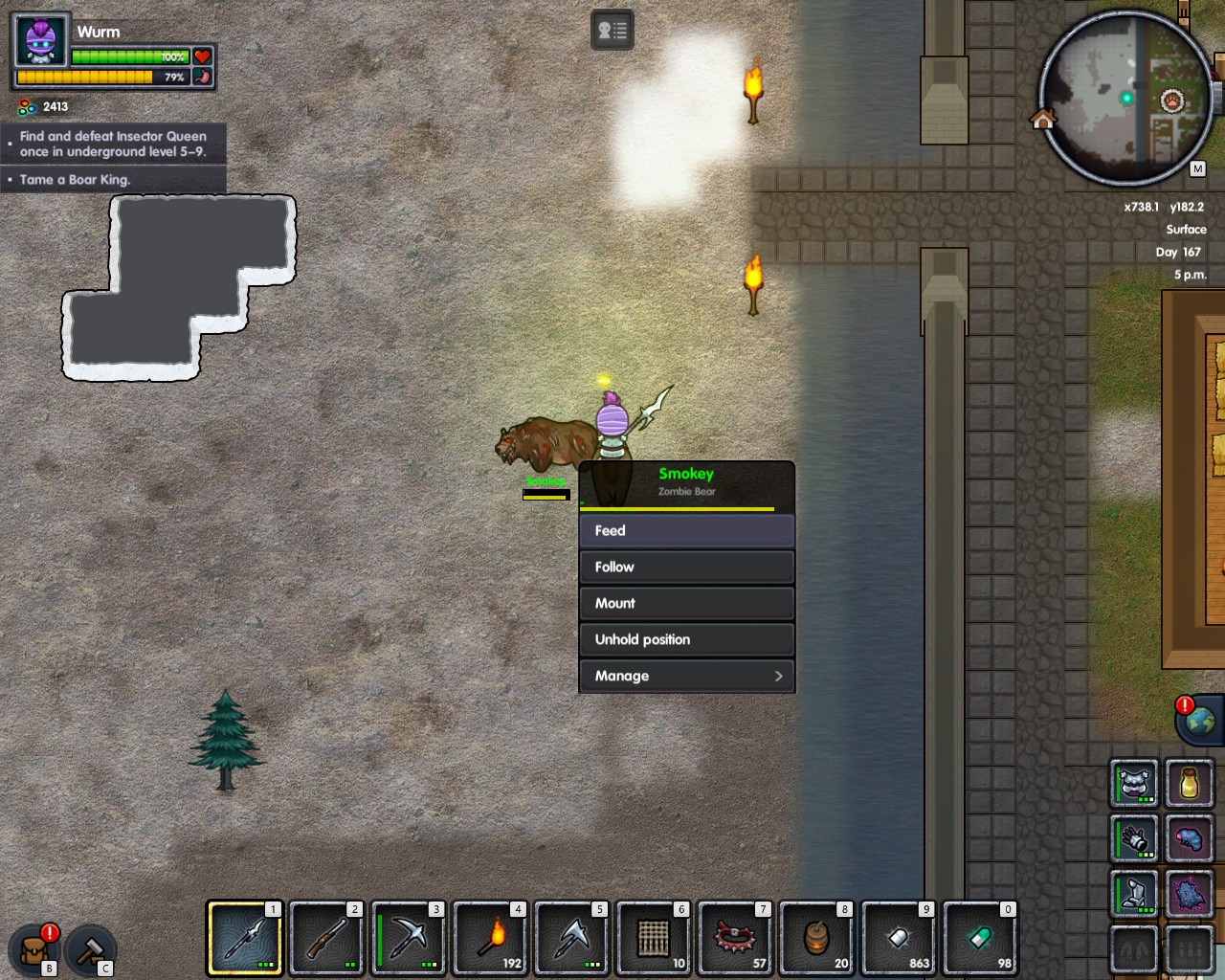 14.) You can only activate them one at a time by right clicking on them. They do 40 dmg in a 7×7 AOE each but they will NOT set-off other Explosive Barrels near them and it would be just a shameful waste of bombs to try and blow them all up like an ammo dump! It will destroy them alright, but it won’t multiply the desired effects. And you CANNOT as yet in the game shoot the explosive barrels to set them off! You must right click them to do it and then get clear as fast as you can!

15.) You can just steal all the metal furniture and workstations in Towns and settlements to your heart’s content and even smelt them all down to metal bars in their own forges! 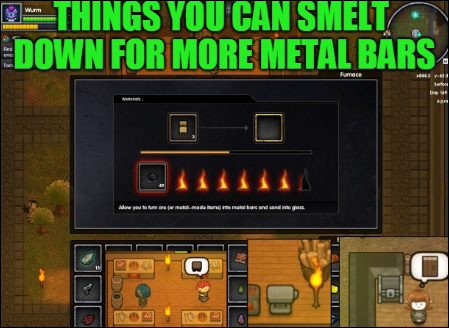 16.) One really good strategy for clearing out a mob infested area has always been to sneakily wall-off enemies into manageable little bite-sized pieces, singling them out for easy pickings!

It used to be that you could attack through walls and fences but that was thought to be a bug and has since been patched out of the game. Solution: Use gates! https://youtu.be/UYCAwPf7WmE – [youtu.be]

Stone Walls are better than Stone placed out of your inventory but Metal Walls are even stronger –and Iron Walls can take a couple blasts from the Ground Captain’s flying Land Mines in close quarters! I walled him into a Teleportation chamber with my tanking pet blocking his escape even as he lay there Bleeding Out …All his explosives went off point-blank but my ‘Gold Explosive Arrows’ finally put that Grounder Captain to rest! –And he gave up the ‘Modified Detector’ 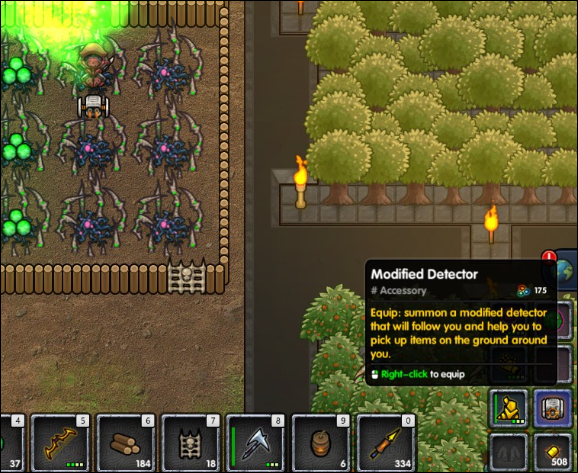 …His buddy, the other Boss …the one with the ‘Gatling Gun’ –Yes, there are Two Grounder Bosses! Guess what he drops!!

But getting back to material strengths…You can attack through doors as long as the door itself doesn’t take more than one hit –meaning that; If you hit it and then they hit it the door will break unless it’s made of Iron or better. To avoid breaking a door when you attack through it: make sure the mob is well away from the door when you attack and use a spear. That way you’ll kill them before the door breaks!

18.) Can we just Delete mob filled cages out of our Inventory? Yes! Just Shift+L click on ANY item in your inventory to quickly delete it. When you delete your next item it will be permanently deleted. Otherwise, you can use your Trash Can as an extra inventory slot when you’re a little shy of inventory space!

and The Insector Oueen’s ‘Poison Spore’ 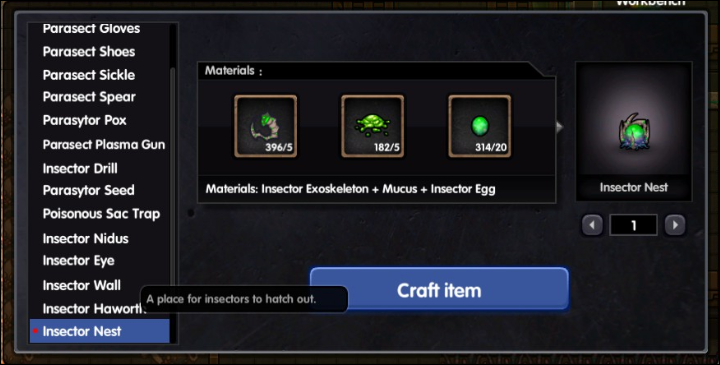 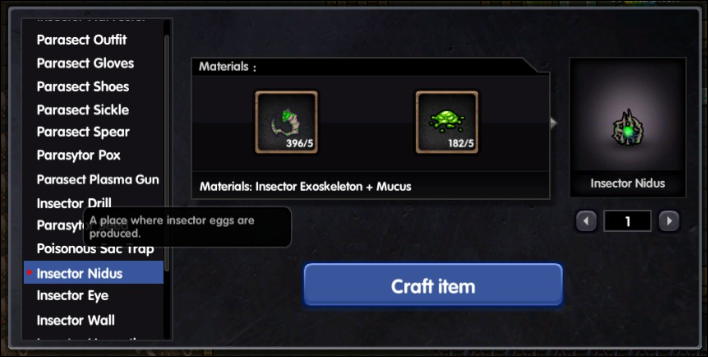 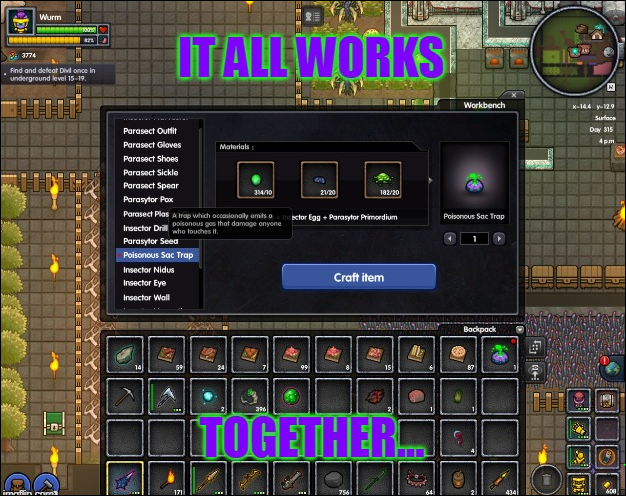 Stuck on top of a wall: 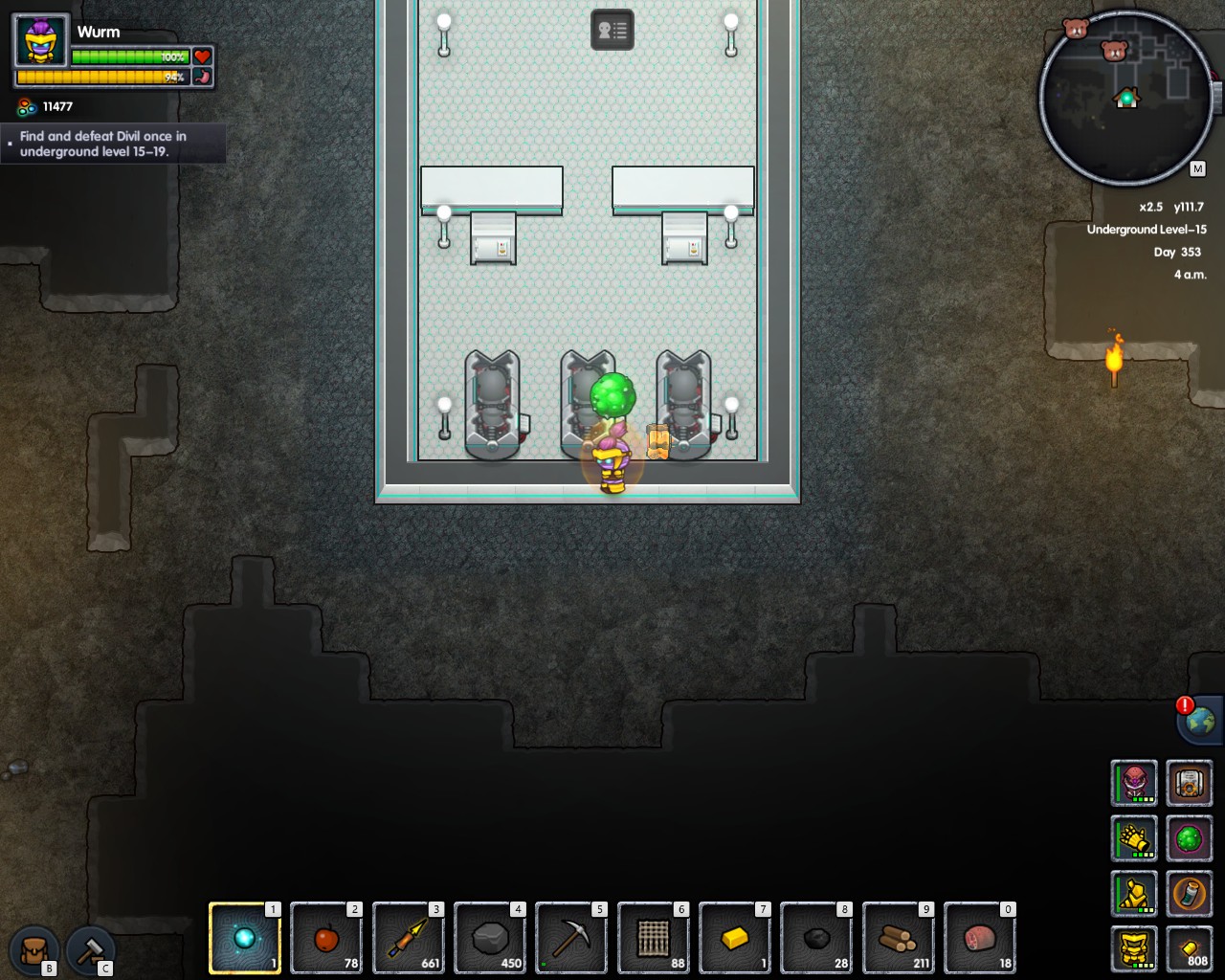 21.) If you ever get stuck on a wall and your pets are too far away to just mount one and escape it …There’s another way! I had to sacrifice my 2 favorite weapons to get the materials to make it work but I made a shovel and dug down a level then I just go down into it and come back up to get unstuck. On level -15 I needed a Gold Shovel. Better to lose a couple weapons than to lose your whole game!

Here we come to an end for Keplerth Playthrough Gameplay hope you enjoy it. If you think we forget something to include or we should make an update to the post let us know via comment, and we will fix it asap! Thanks and have a great day!