A guide to playing this incredibly complicated game for someone who just downloaded it. This guide explains ui elements and mechanics. It also gives strategy advice and tips.

Alright I gotta get some disclaimers and such outta the way before I start talking about the game.

Disclaimer 1: I’m nowhere near an expert on this game, and you should not just read my guide as the final word in how you play the game. This is just something for me to give out information I wish I had when I first started the game.

Disclaimer 2: This guide is being made for a high school project, so think what you will about that.

Alright that should about do it for the disclaimers. Time to start learning how to play this game. I would recommend having the game open while reading this to test stuff in case something is a little confusing to you.

Section 1 – Starting the Game and Understanding the UI

Upon booting up Hearts of Iron IV and selecting single player in the menu, you will be faced with a menu for selecting a country to play. This will include all the major nations, some smaller nations, and an option to select from the world map. When you select a country and hit play, the game will begin. The first thing you will see, is a map of the world zoomed in on the country you are playing as. Get used to looking as this map because this is what you’ll be looking at most of the time. Time is paused at the start of the game, so nothing will be happening yet. Let’s go through all the parts of the UI, and explain what they mean.

A screenshot of a freshly started game with the ui elements numbered. 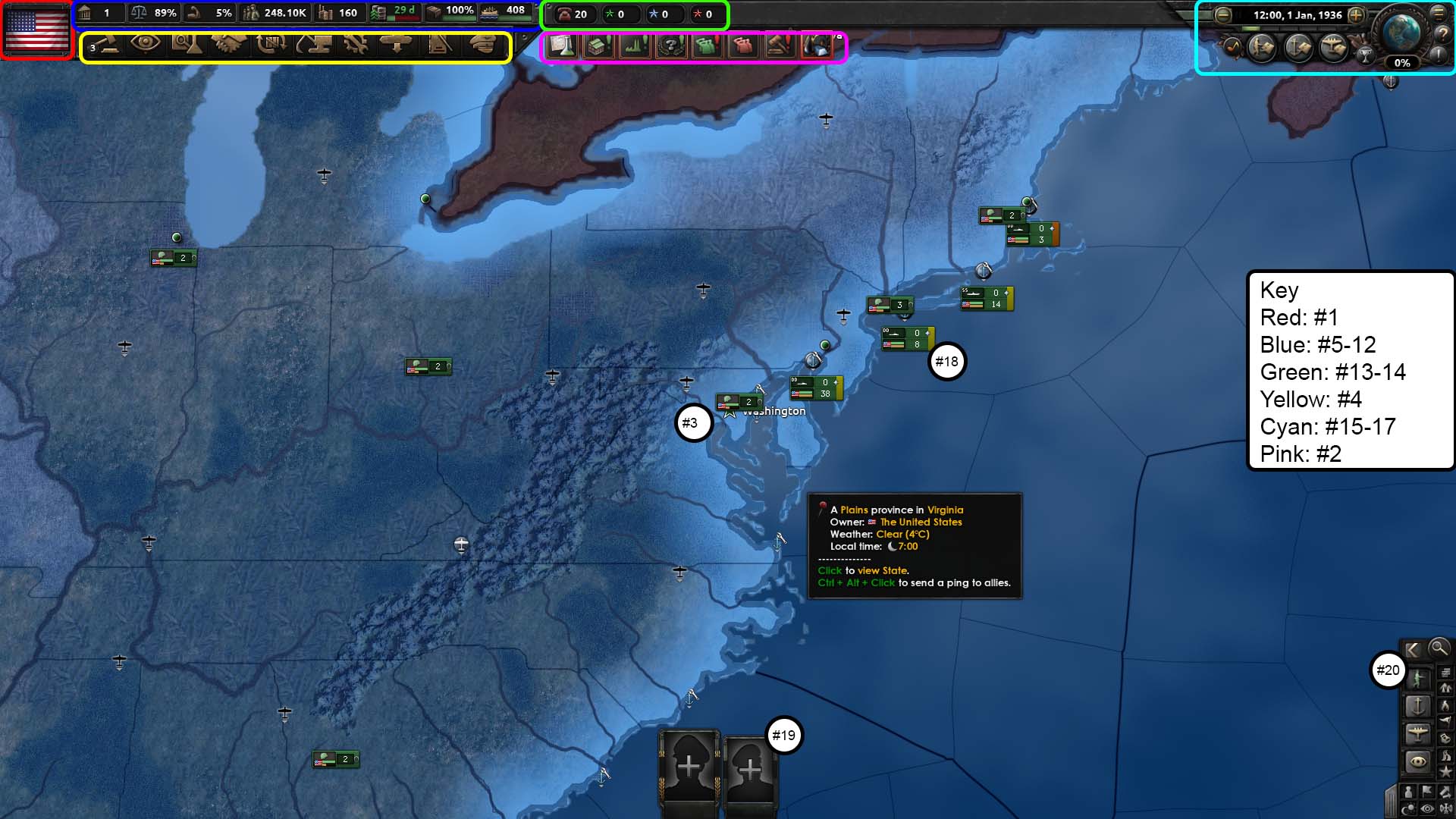 1. The Flag- A flag of the nation you’re playing. Click on it to see a menu for appointing political advisors, and change national laws.

2. Alerts Tray- Little icons will appear in this area to alert you of things that may require your attention. To see what each one means, hover over it with the mouse and a text box should appear that tells you what the icon means. Clicking on an icon will bring you to wherever that alert is happening or where you can deal with it.

4. The Menu Tabs- These 10 buttons will all take you to a different tab. From left to right these tabs are the decisions tab, spy agency tab, research tab, diplomacy tab, trade tab, construction tab, production tab, training tab, logistics tab, and the officer corps tab. I’ll go more in depth on these in another part of this section.

6. Stability- This is a measure of how stable your government is. High stability means increased political power gain, increased factory output, less consumer goods requirement, and some other good bonuses.

7. War Support- This is a measure of how much your people are willing to fight. High war support means increased attack and defense on core territory, and a higher surrender limit.

8. Manpower- This is a count of people in your country that are eligible to join the military and haven’t yet done so. Hovering over this will display the total manpower of your country and where it’s assigned.

9. Factory Count- This is just the number of civilian factories, military factories, and naval dockyards in your control.

10. Fuel Reserve- This shows how much fuel you have in your stockpile, and how long it will take to completely fill or deplete it depending on your fuel production and consumption at that time.

11. Logistical Fulfillment- This shows the percentage of trucks and trains you need to supply your army that you actually have and use.

12. Convoys- This is just the number of naval convoys you have available.

13. Command Points- this shows your current command points that can be used to appoint military staff or use general abilities.

14. Experience- From left to right these three values are your army, navy, and airforce experience. These are really important to making your military stronger without having to increase the size of the military.

15. Time Controls- This shows the current date and time in the game. It also shows whether or not time is paused, and how fast time will proceed if unpaused.

16. The Ledgers- From left to right these buttons are the army, navy, and airforce ledgers. Clicking them will pull up a menu with information on that branch of the military.

17. World Tension- This globe shows the world tension percentage. World tension increases and decreases based off of the actions of countries in the game, and the amount of world tension determines limits on certain actions, and ai behavior.

19. Army/Army Group- This is where your armies will show up when you assign units to them. An army is a group of units under one general. You can create an army by selecting the troops you want in it and then clicking the button with the plus sign and the silhouette at the bottom of the screen..

20. Map Modes- This is an assortment of buttons to change what the game map is showing you. Hover your mouse over each one to see what it will display.

Hey, remember those menu tabs near the top of the screen? All but one of those tabs are very important, so I’m gonna go through what they all do or show you.

Research is done from the research tab(shocking I know). All the research slots you can see in the research tab can be set to research a specific technology by clicking it. When you click on it, it will pull up a menu with all the techs in the game. There will be tabs at the top of this menu to change the type of techs displayed. From right to left the tabs represent infantry, support companies, tanks, artillery, navy, airforce, electronics, and industry tech. Every tech has a year assigned to it. Attempting to research the tech before that year will incur a penalty, making it take longer to research. Typically you want to prioritize researching electronics and industrial techs, but beyond that it’s all up to circumstance what you want to prioritize.

A division is a grouping of troops that is visible on the game map. They are the smallest grouping of units that can take orders, and act individually. Every division has stats that dictate it’s strengths, weaknesses, and properties in and out of battle. The stats a division can have are as follows.

The smallest grouping of troops in the game is called a battalion. There are two main types of battalions: regular battalions and support companies. Both types then further divide into many different types of battalion that all have different stats and equipment needs. By combining up to 5 support battalions and 25 regular battalions, you form a division. Divisions are the units that you can see on the map, and have stats that are determined by which battalions it is made of. A division template is a blue print for a division that lays out which battalions are used to make that division. A country will always start out with at least a basic infantry division template, and maybe more templates depending on the country. New templates can be made by researching certain technologies, or designing one using army experience. Existing templates can also be altered using army experience and divisions of that template that are already trained will automatically change to the new template.

Battleplans are large orders that you can give your generals and field marshals. When a general is given a battleplan all available units not already in another battleplan will be assigned to it. You can also select specific units to be assigned to the battleplan. Battleplans come in the varieties listed below.

Now all this stuff about battleplans is great for a casual player, but if you want to play the game at a higher level, then forget most of what you just read. To maximize your armies capabilities, all you need is frontlines, and a very important little thing called micromanagement. Micromanagement(commonly shortened to micro) is the act of giving your units direct orders instead of having them follow a general battleplan. This allows you to control exactly which units make what push into where. This means that you can engage only in battles you will win, where an offensive line order would throw every available unit into a battle. Naturally you need to keep the game speed low to make this work very well, but if you’re willing to take the extra time you’ll do much better. Micro takes more than just time however, it also takes knowledge and skill. Being able to tell your units exactly what to do only helps when you know exactly what they should be doing. This is why newer players should generally use mostly battleplans, and lightly increase the amount of micro they do until they’re confident in their ability to micro correctly.

You really want to have experience in specific situations, but macroing in general can be summed up to a few important concepts.

The anatomy of a successful encirclement 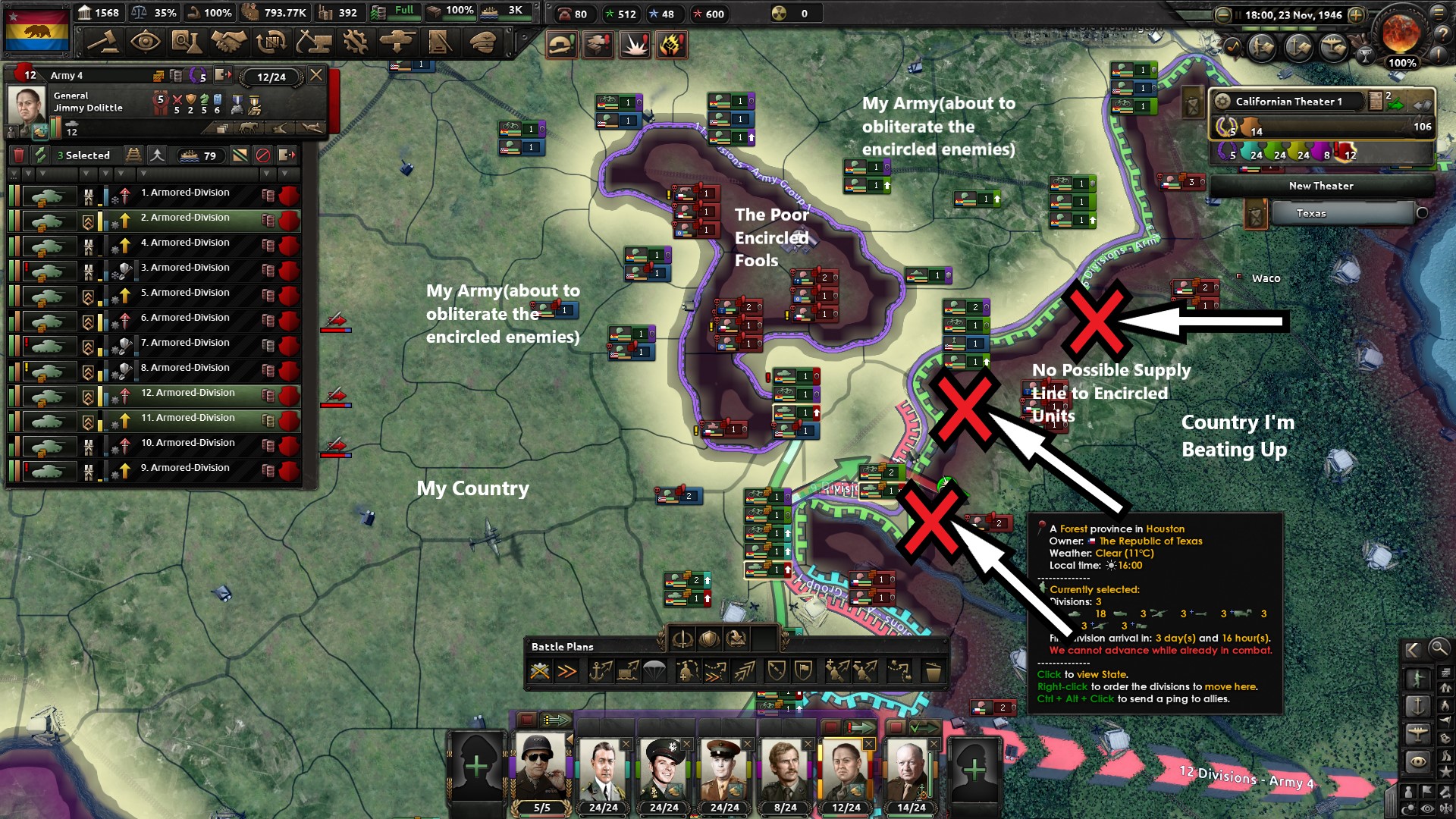 The Airforce is probably the simplest branch of the military in Hearts of Iron IV. There are 7 different types of planes that all have different purposes. The 7 different planes are:

In order to use the planes you need to assign them to airwings. Airwings are just groups of the same type of plane that will all do the same mission. Typically you’ll want to make airwings of 100 planes each to maximize the chance of generating an ace pilot. An ace pilot can be assigned to an airwing, and will provide that airwing bonuses based off of that pilots specialty.

That should about do it for the airforce so now we’l–. Oh yeah. Rockets.

Rockets are unique, but only useful in the late game. Rocket sites will constantly produce rockets that can be assigned to strategic bombing missions like planes. Rocket sites become available to build when experimental rockets is researched, but the rockets the produce won’t have a viable range until advanced rocket engines is researced. This prevents rockets from being important until at least 1946, or in some cases 1944.

There’s a good bit of stuff that I did not get to put in here before the deadline, so I’m going to use this part to put links to other guide on the stuff I missed.

The Navy-
By Interstellar Desk Plant

Here we come to an end for Hearts of Iron IV Elements and Mechanics Gameplay Tips hope you enjoy it. If you think we forget something to include or we should make an update to the post let us know via comment, and we will fix it asap! Thanks and have a great day!