If you’re wondering how seasons and their cycle work in the game, you’ve come to right place.

What are seasons in Forza Horizon 4?
Seasons are a game-changing feature that were introduced alongside the game back in 2018, and with them comes many new challenges, races, rewards, etc.
In this guide, you will find useful information about what seasons are, how often they change and how you can progress within them.

Each month, the game receives an update, renewing the contents of seasons in the form of Series X update (X is the number of the update the game has received). Each series includes 4 seasons of its own, which cycle weekly. With the implementation of the update, we start with the summer season. After that, we have the Autumn season, then the Winter season, and last but not least, we conclude the series with Spring season.

How to unlock seasons? (A.K.A join the horizon roster) 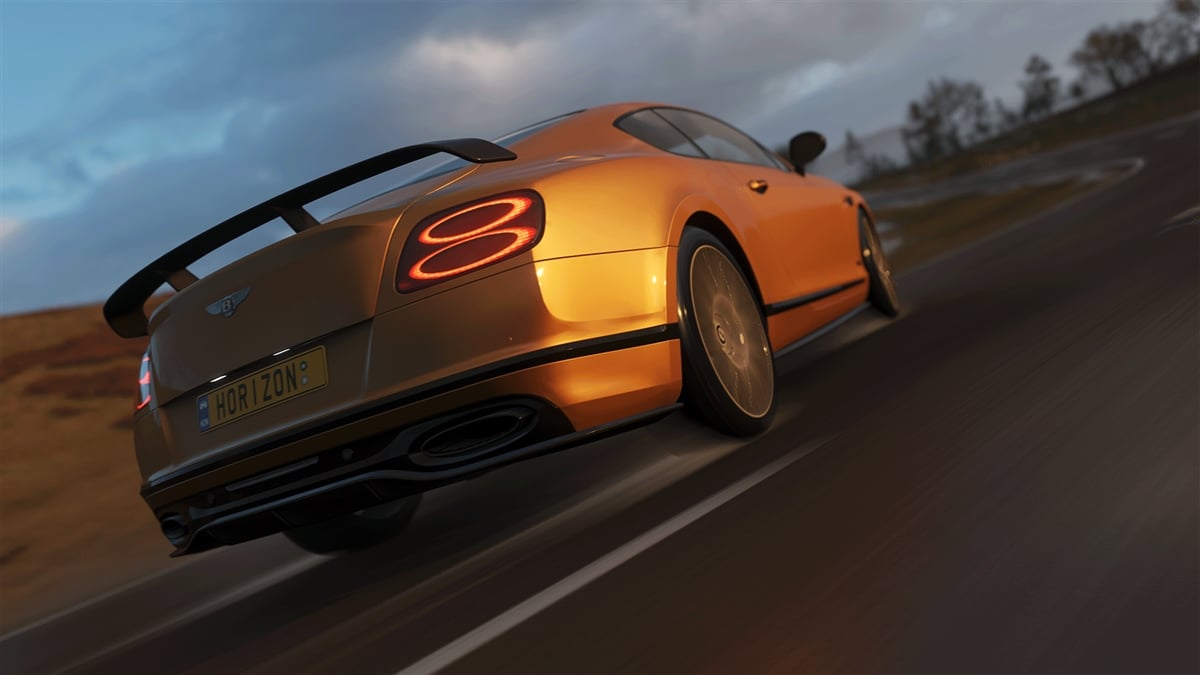 Each season lasts about one week. The seasons cycle weekly and they begin right after one-another.
As stated earlier, each season includes its own series of races, championships, challenges, rewards, etc. To be more specific, have a quick look at the content map below. 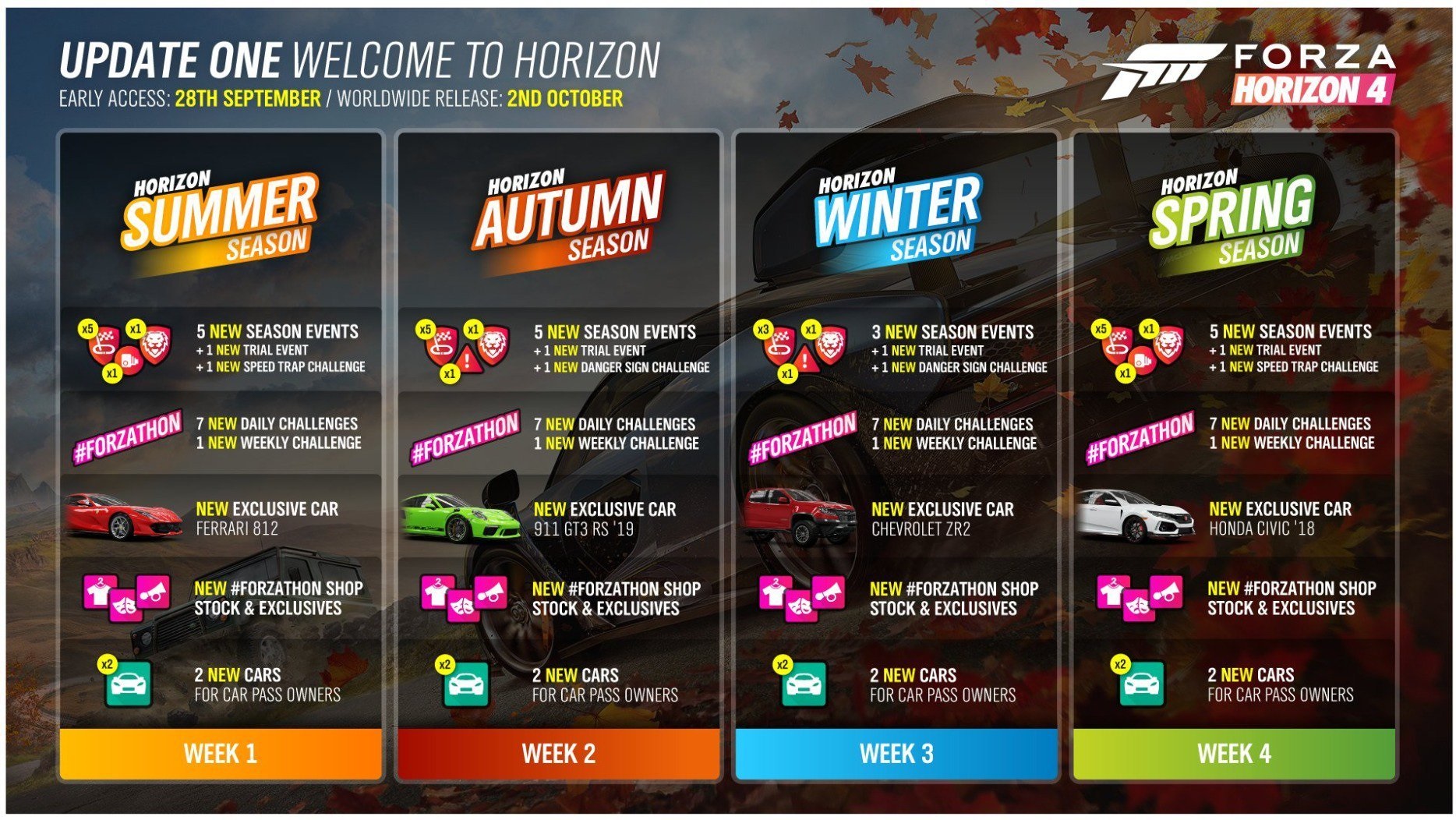 Now this was just to show you what we’re talking about, seasonal-content-wise. (:D) Many things have changed since the game first launched back in 2018, and now, we’re going to go over everything we need to know about seasons and their contents.

Now let’s get to what these are and what we have to do to complete them. 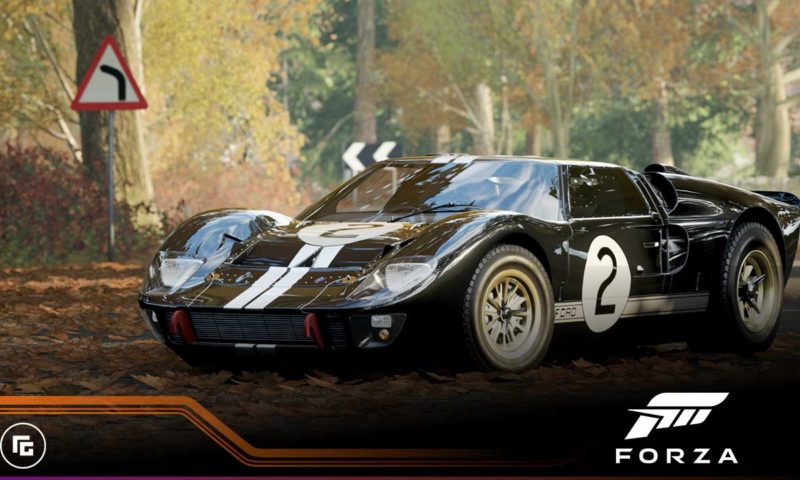 First off, we have the photo challenge, which is by far the easiest part of each season, you view the requirements of the challenge directly from the Festival Playlist menu (found at the main pause menu of the game) and complete the challenge. This challenge basically wants you to take a specific car to a specific place in the game, open up photo mode, take the pic, and voilà! Photo challenges give you a super wheelspin as a reward. 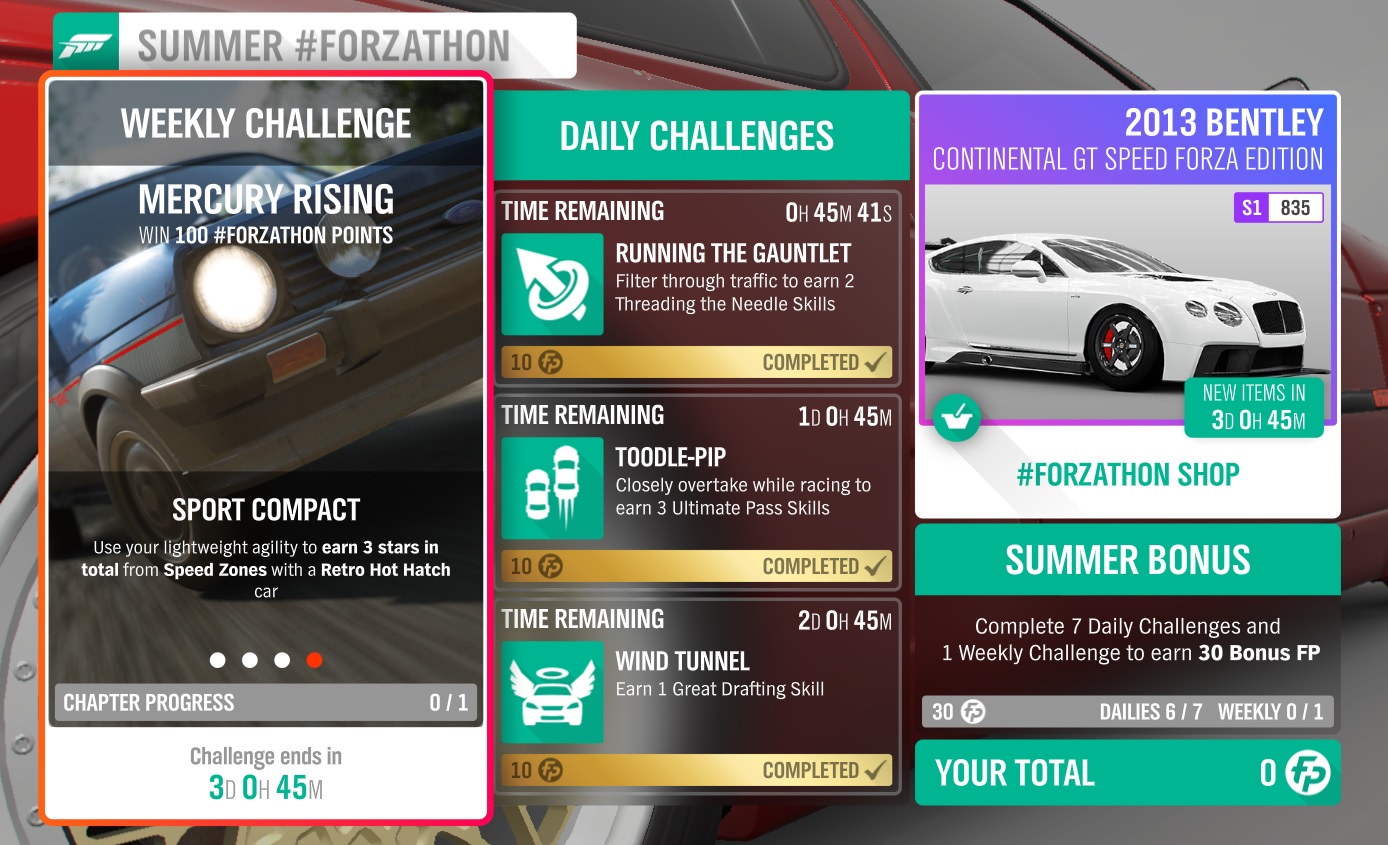 This challenge is a bit long. It consists of 4 individual series of tasks for you to do, which is basically 3, because the 1st one always wants you to own a certain kind of vehicle. The other 3 require you to compete in certain events, ace specific PR stunts or do other crazy things, but in the end, you’re left with 100 #Forzathon points (200 if you have the VIP pass), which is cool!

The daily challenges refresh daily and are pretty simple and straightforward. They require you to do certain skill moves and once you’ve done them, they give their reward and show as “golden” in the Festival Playlist menu. 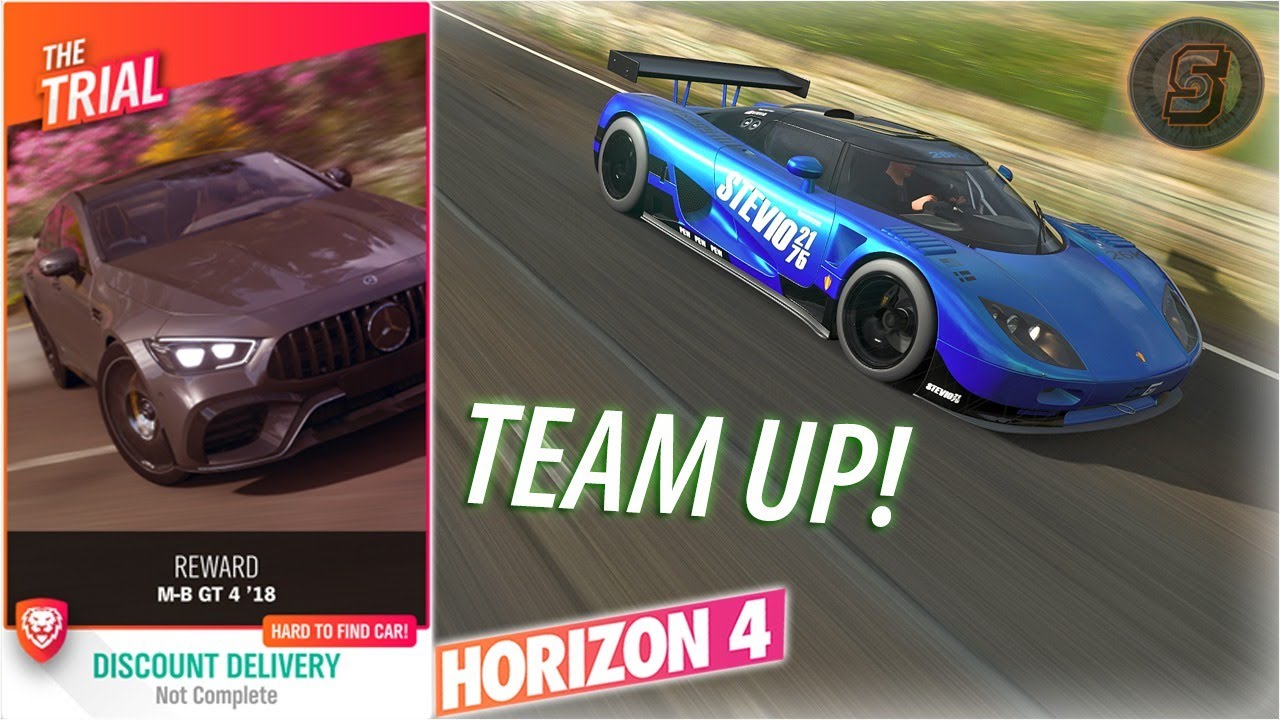 This one’s TOUGH! This challenge is actually a co-op PvE championship, which puts you and other players in a team, against AI Drivers (A.K.A DRIVATARS) with the highest difficulty in the game, which is unbeatable. You have to race 3 events in the form of a championship with other players and whichever team wins 2 out of 3 races, emerges victorious! The reward for the Trial is usually rare cars.

Showcase Event Re-mix (Only 2 seasons in each series update): 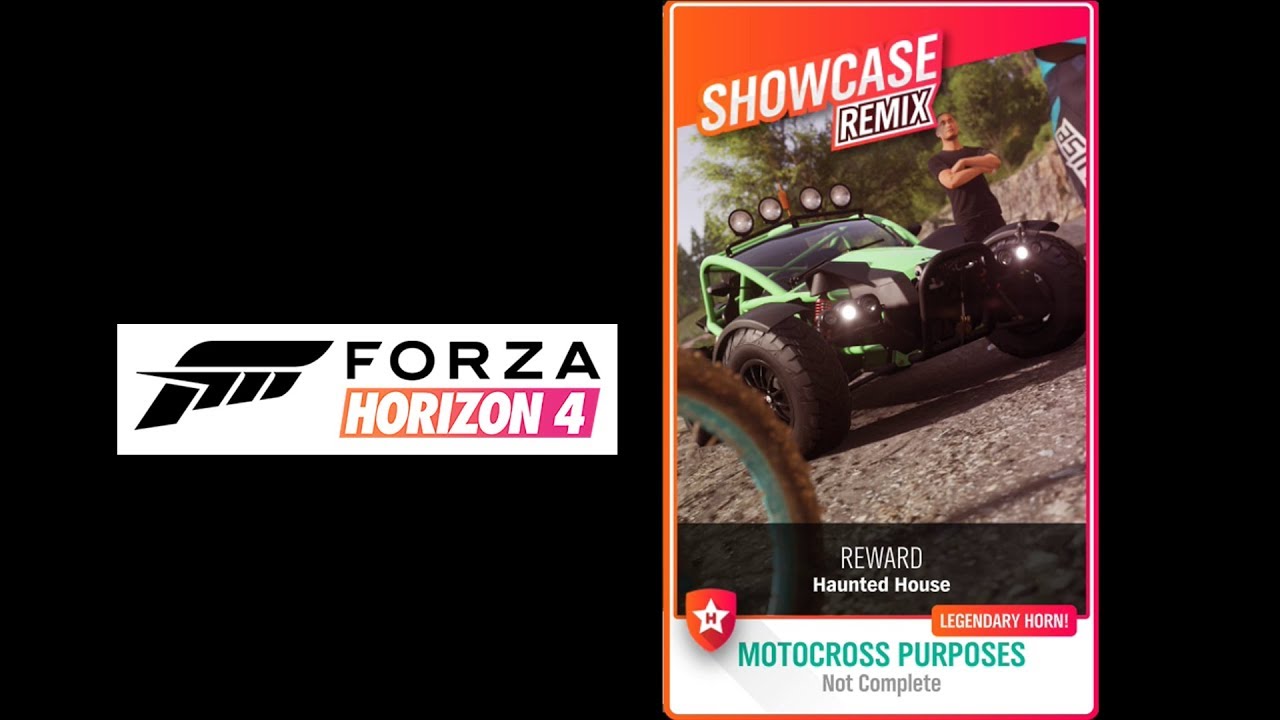 This is my favorite part of each season. In 2 out of the 4 seasons of each series, we have a remixed version of the 5 original showcase events of the game. According to the weather specific to each season, the showcase event receives remixed music, as well as car to propose a more fun, more challenging event for the season. The reward for showcase remixes is usually Super Wheelspins. 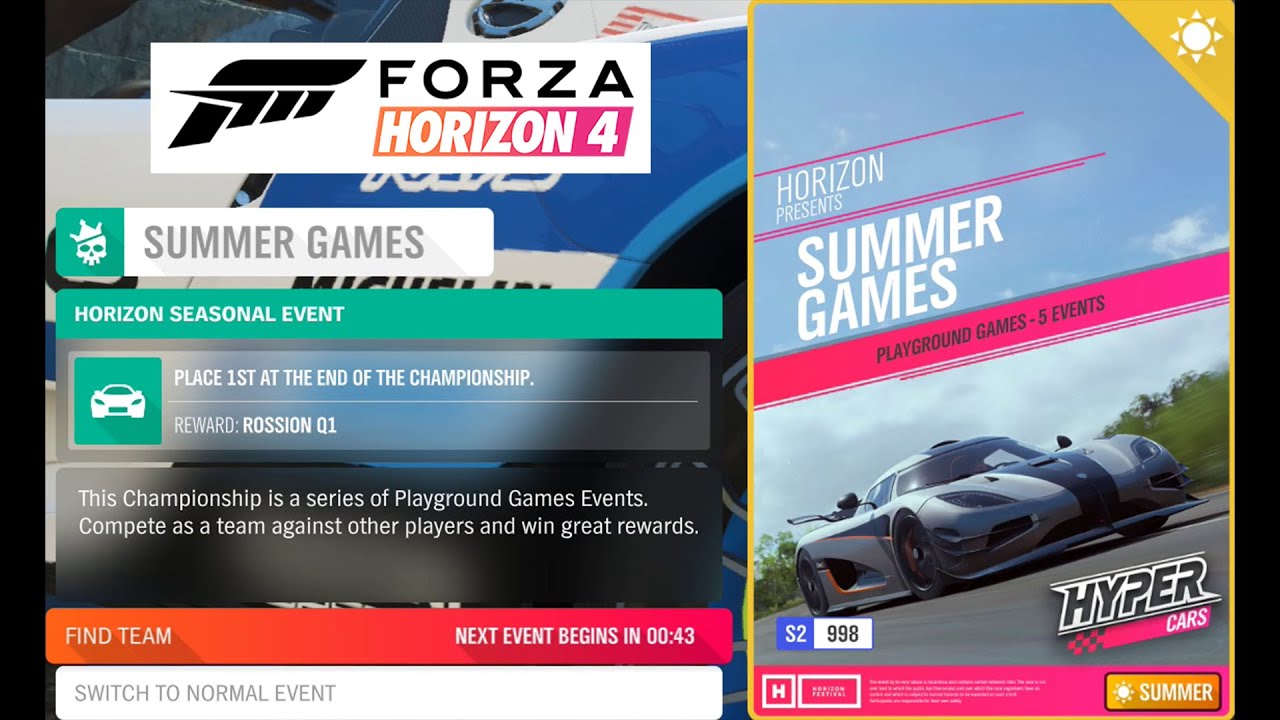 Each season, we have a set of 5 different playground games, which is comprised of 12 players (2 teams of 6) competing in 3 game modes: King, Flag Rush and Survival (Infected). This one is by far the most pointless one imo, because most of the players either quit very early in the set or either suffer from terrible connections, which results in unbalanced teams, and inevitable demise of one team. The reward for the seasonal games is usually hard-to-find cars. 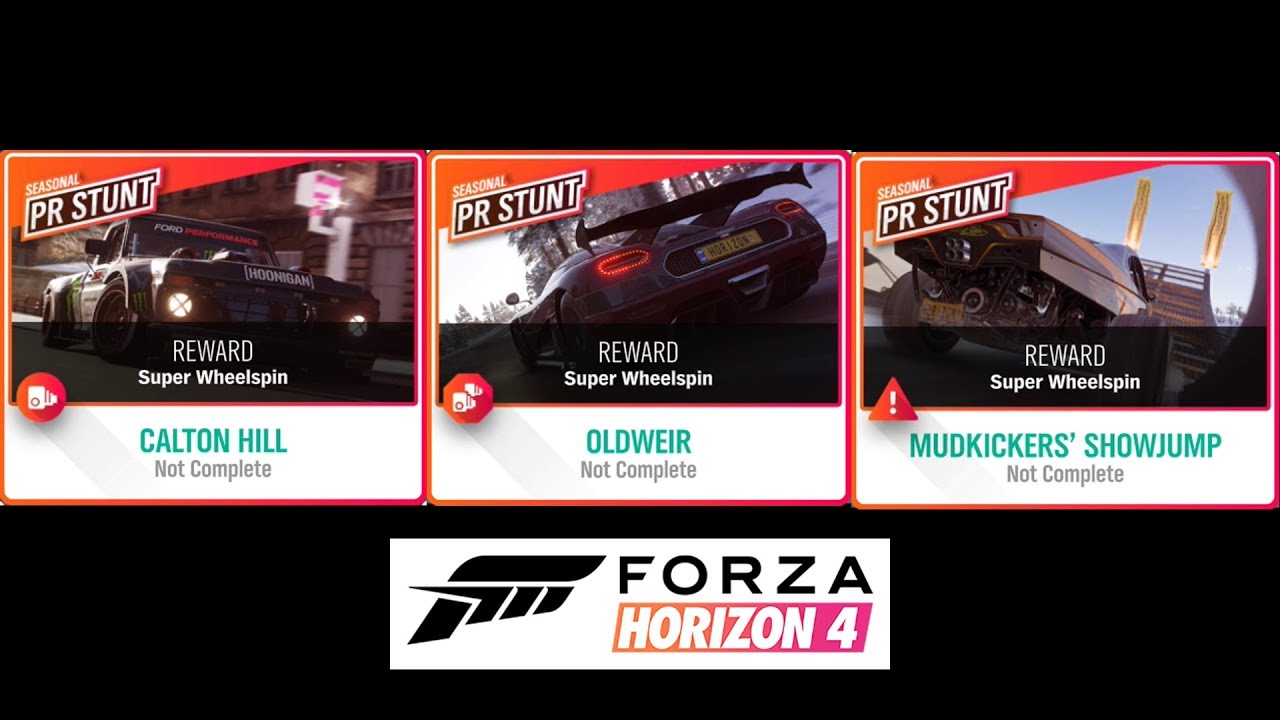 After Photo Challenge, this one is the easiest and the quickest available challenge in each season. We have 4 types of PR stunts in the game:

Each season, we get 3 different seasonal PR stunts, and what they require to complete is basically a little bit more than what is needed to get 3 stars in the said stunt. For example, the “Northbound Danger Sign” require a jump of 213.4 M to get 3 stars. The seasonal objective of this stunt is 218.4 M. The rewards for seasonal PR stunts are Super Wheelspins. 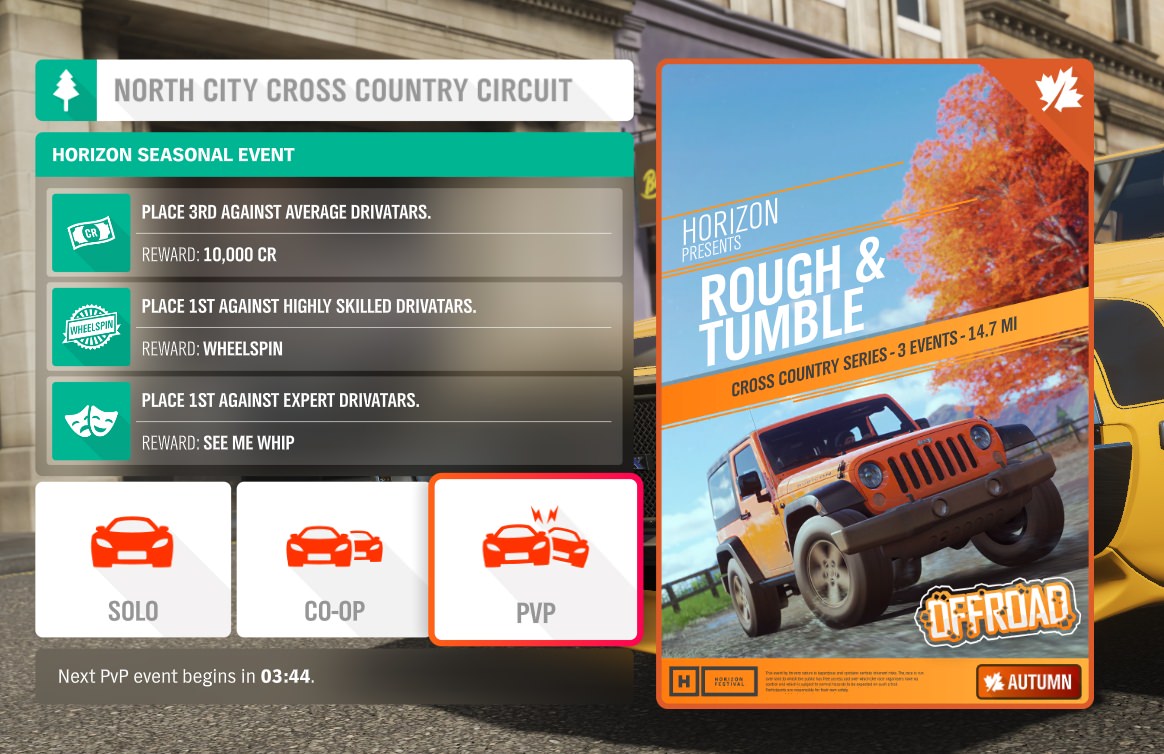 Lastly, we have 3 championships for each season (A championship is a set of 3 race events). These are pretty basic and to receive the ultimate award the have to offer, you have to set the difficulty of the AI to “Highly skilled”. The rewards for seasonal championships are either rare or legendary cars or clothing items. 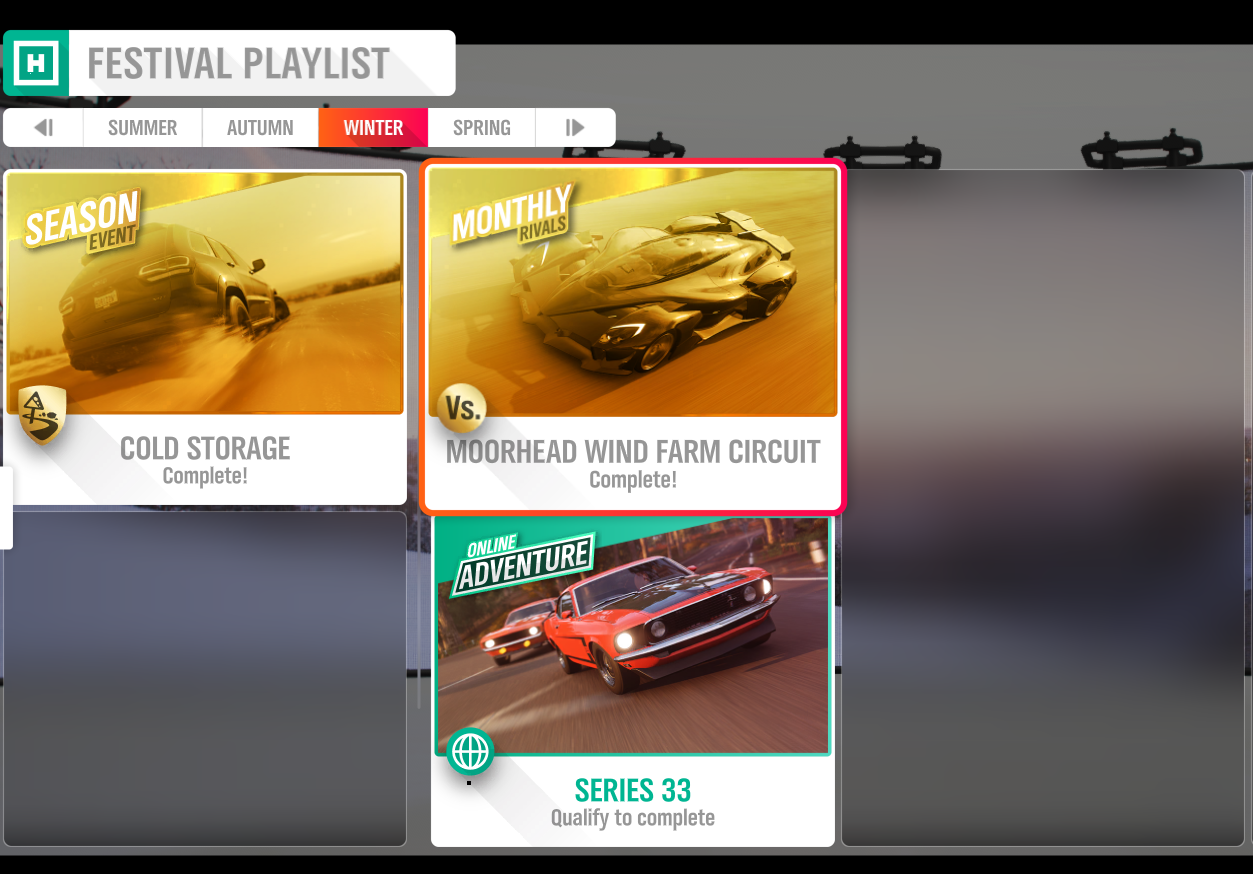 Each series, we also have ranked online adventure and Monthly Rivals, which is not 100% needed to compete in. The online adventure is basically comprised of PvP super-unjust championships, but the Monthly Rivals puts you in a specific track with a certain car, and requires you to do laps, in order to break you friends’ and other players’ records. This can be completed with just one lap, which takes about 1 minute, so I advise you to do it if you can.

In this guide, I tried to explain extensively how the seasons feature works in Forza Horizon 4. I also explained a little bit about the series updates and how the seasons cycle in-game. This was my first EVER guide on steam, so if you see anything that could be improved, any part I didn’t explain thoroughly, or if you have any remarks or notes, please let me know in the comments section.
Cheers!

Here we come to an end for Forza Horizon 4 How to progress SEASONS hope you enjoy it. If you think we forget something to include or we should make an update to the post let us know via comment, and we will fix it asap! Thanks and have a great day!