After defeating a boss, you’ll be given an option to continue your run or to end it by detonating a planet: 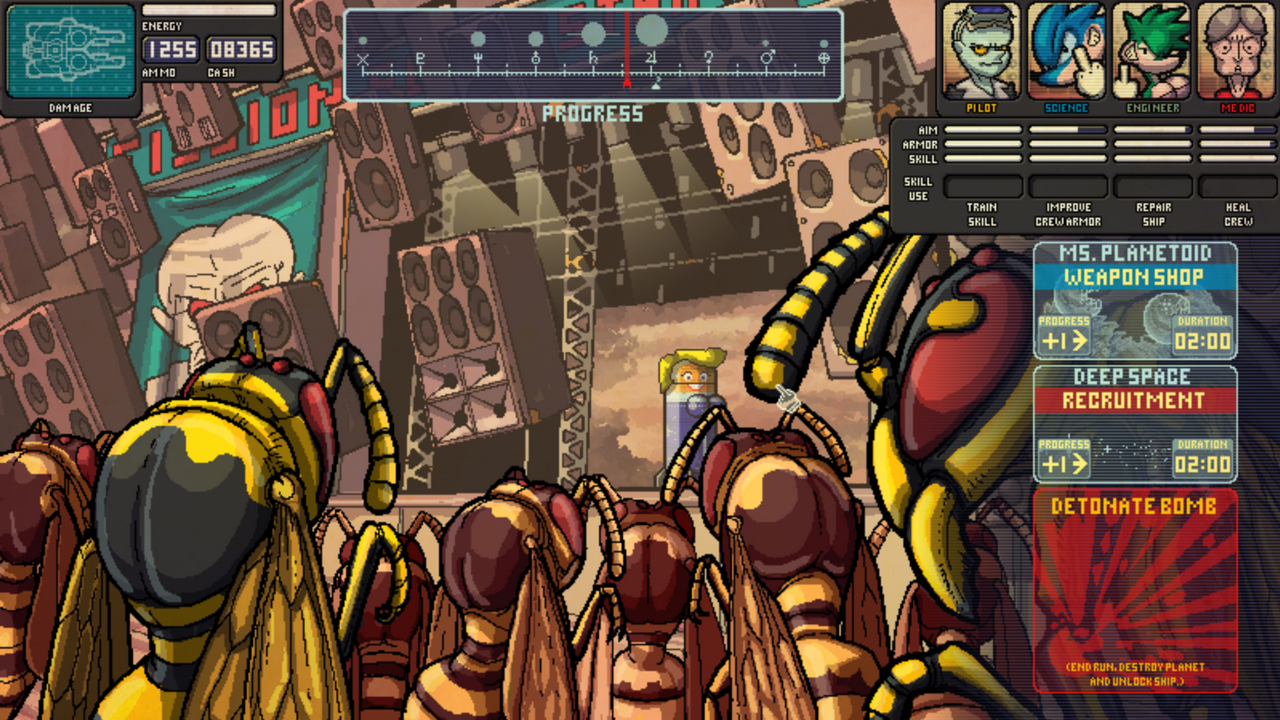 No matter how good your think your run is, always pick “Detonate” after you beat a new boss for the first time. That way you’re able to save at least some of your progress, and do the next run with a better ship.

There are no bonuses for detonating on the same planet twice, so you should never do it.

To level up your Pilot at the start of the run you use DNA.

DNA is preserved between runs. If you don’t have enough DNA to max out your pilot skill, do a couple of junk runs until you do.

DNA is awarded for killing people, not for destroying ships. During your junk runs, aim for cockpits, as 8t will maximize your chances.

If you are in the Weapon Shop, always buy all the ammo available, unless you’re short on cash. As you progress your weapons will consume more and more ammo, so unless you have the Ammo Outfit, you’ll be burning through it quickly.

If you’re in the Shipyard, always repair your ship fully. It’s cheap, and you never know what comes next.

Line of small particles that tears everything in its way.

Shields can block them.

A target will appear on the screen few seconds before the battery makes it shot. 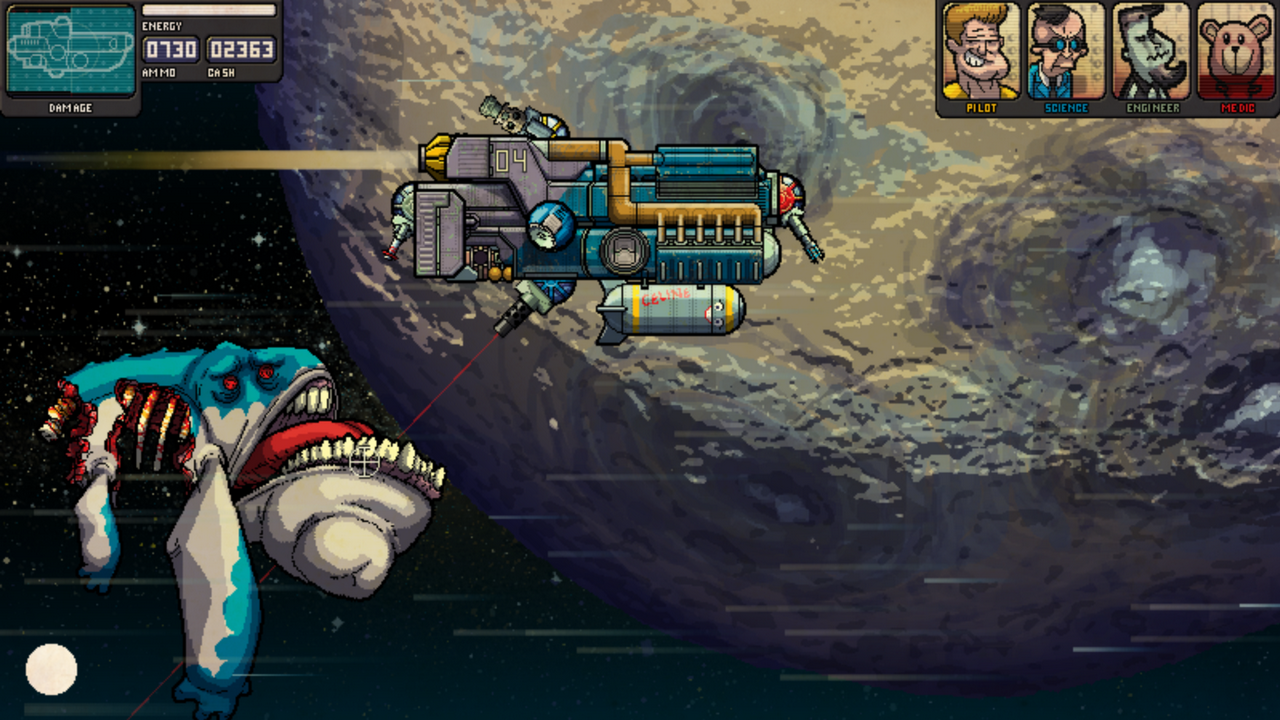 Space whales will slowly chase you from the back of the screen.

Whales are not aggressive and do not damage your ship.

Damaging parts of a whale brings some cash.

At early stages, friendly drones will fly at you and repair you ship slightly once they touch you.

They repair enemies as well.

At later stages, the drones will steal your money instead.

At final stages, drones will explode. 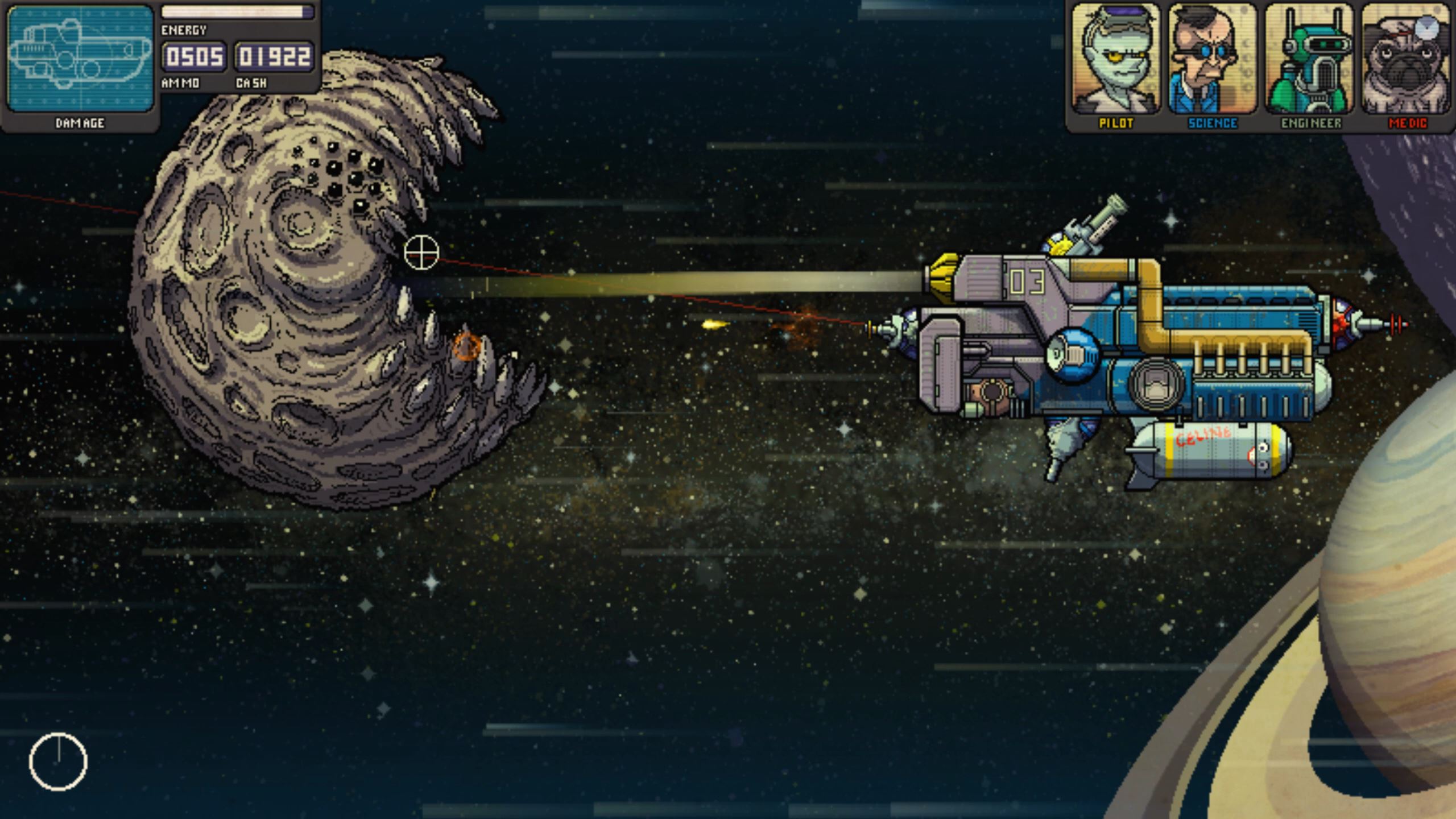 A huge “pacman” that comes at you from different angles.

Your shield can block it.

Can get quite dangerous if you run low on shields, though.

Containers can be destroyed. Each container contains random bonuses and cash.

There are two types of singularities.

Black ones will suck you towards them.

Red ones will damage your ship. Both are quite bad, since they are very hard to predict and avoid.

Cows will fly at you front the front of the screen. They can be killed by touching them with your shield.

As the name suggest, this is a mix of Space Piranhas and

Quite similar to Freight Convoy, but warships will shoot back at you downward and forward if you hit them.

A horizontal stream of fire telegraphing shortly before it starts.

Extremely dangerous to your ship and crew.

Cannot be blocked by shields.

Focus on avoiding the fire waves, as they will tear through your enemies.

Like a minefield, but instead of damaging your ship, those balls of electricity will drain its energy and stagger it somewhat. More difficult if your ship is focused around energy weapons.

Like Hungry Planetoid, but worse: also adds smaller “pacmans” that chew through your ship and crew.

Same as Comet Tail as far as I can tell. 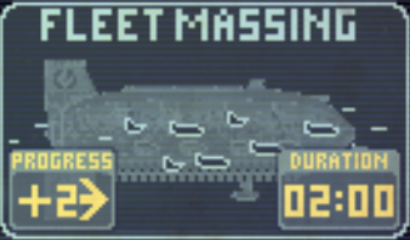 Weapons in this game are either energy based or ammo based.

“This weapon fires .50 caliber rounds. It is the least potent ammo-based space weapon”

This weapon is surprisingly effective, as it will penetrate enemy shields and fry the ship’s crew, potentially decreasing its firepower.


“A dish that sends energy waves at medium range. Shields are mostly ineffective at blocking it”


Same stats as Wave Gun MK1, but with increased range.


“The chainsaw is a melee weapon that deals fairly high damage. It uses ammo because its fuel is stored in the ammunition bay”

This weapon will become available after you beat your first boss, and it has fantastic DPS for that stage.


“This is a harpoon used to hunt space whales. It thrusts forward to stab its target when its electromagnets are activated”


“This blaster shoots volleys of energy bolts at a slow rate. This improved version shoots more bolts per volley”


This is an automatic 30mm flak cannon. It fires explosive fragmentation shells with a timed fuse”


“The Raygun fires a ray burst that can go through obstacles and even shields. It has a slow-firing rate, however”


“The Raygun MK2 fires a ray burst that goes through targets, obstacles and even shields”


“The Gatling Gun is a multi-barrel .50 machine gun that fires a stream of bullets at an incredible rate”


“This weapon fires a stream of Leopoldotron particles at its target.”


“This weapon fires a stream of Leopoldotron particles at its target. It has a fairly high energy consumption rate”

The stream of particles is quite slow.


“Mini missile launcher that shoots RPGs at a random rate. It is used mostly for battlefield saturation”


“Mini missile launcher that shoots RPGs at a fast random rate. It is used mostly for battlefield saturation”


“This mortar launces a nuclear shell that detonates on impact. The resulting explosion deals massive damage”


Special Weapons Shop will allow you to supercharge one of your weapons.

This will give it an unique and awesome look, and increase its stats, but it’s not clear by how much, since stats of supercharged weapons are not visible. 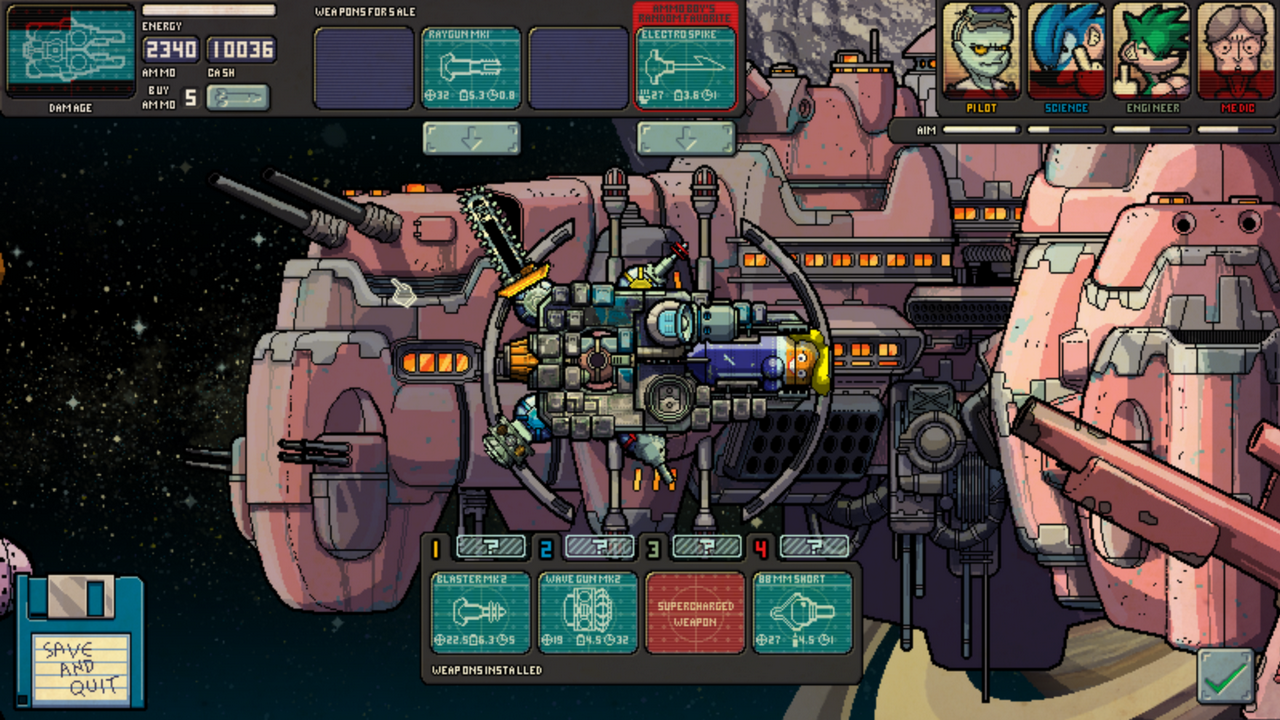 You can destroy its turrets if you have a Machine Gun or a Wave Gun at your front or back.

Machine Gunis probably your best option against it in general.

It will shoot a volley of rockets as it appears from the back of the screen, so if you aren’t careful, it may be a very short fight for you.

There is a blind spot at the front-right, and if you have a high-DPS weapon at the top, you should be able to disable its bottom weapons and stay relatively safe. 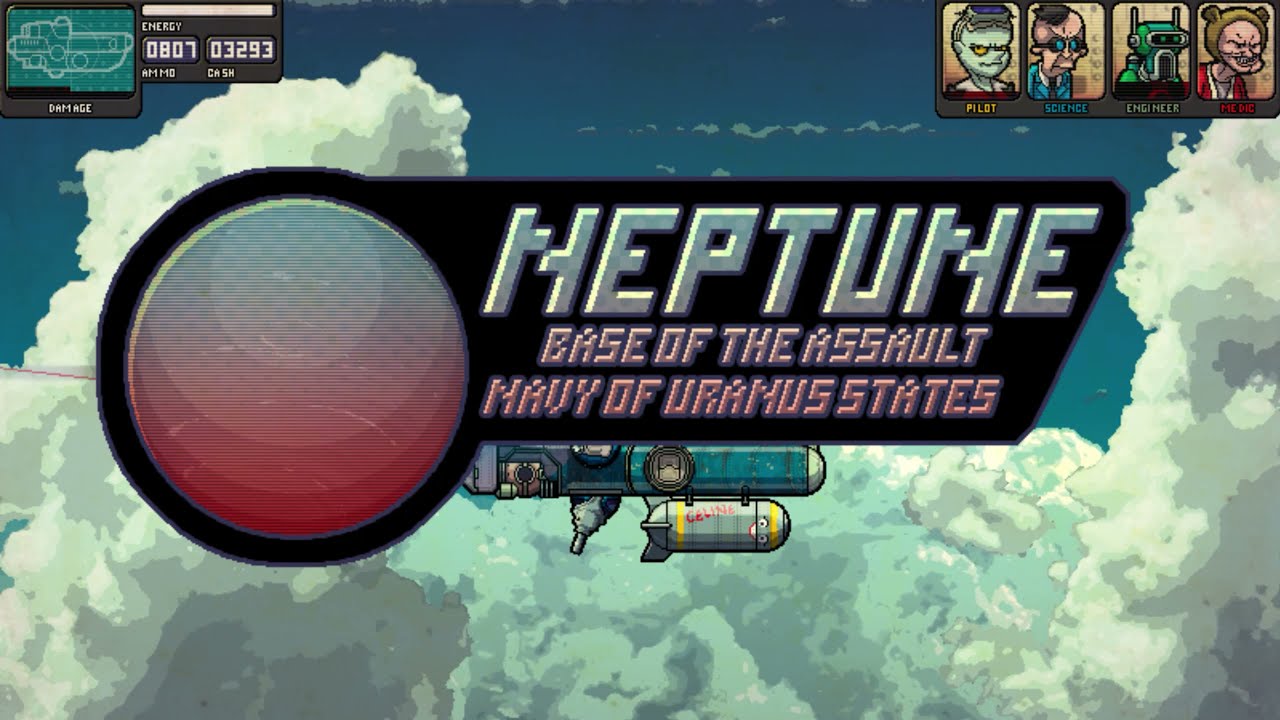 Turning on your shield will make the boss visible. 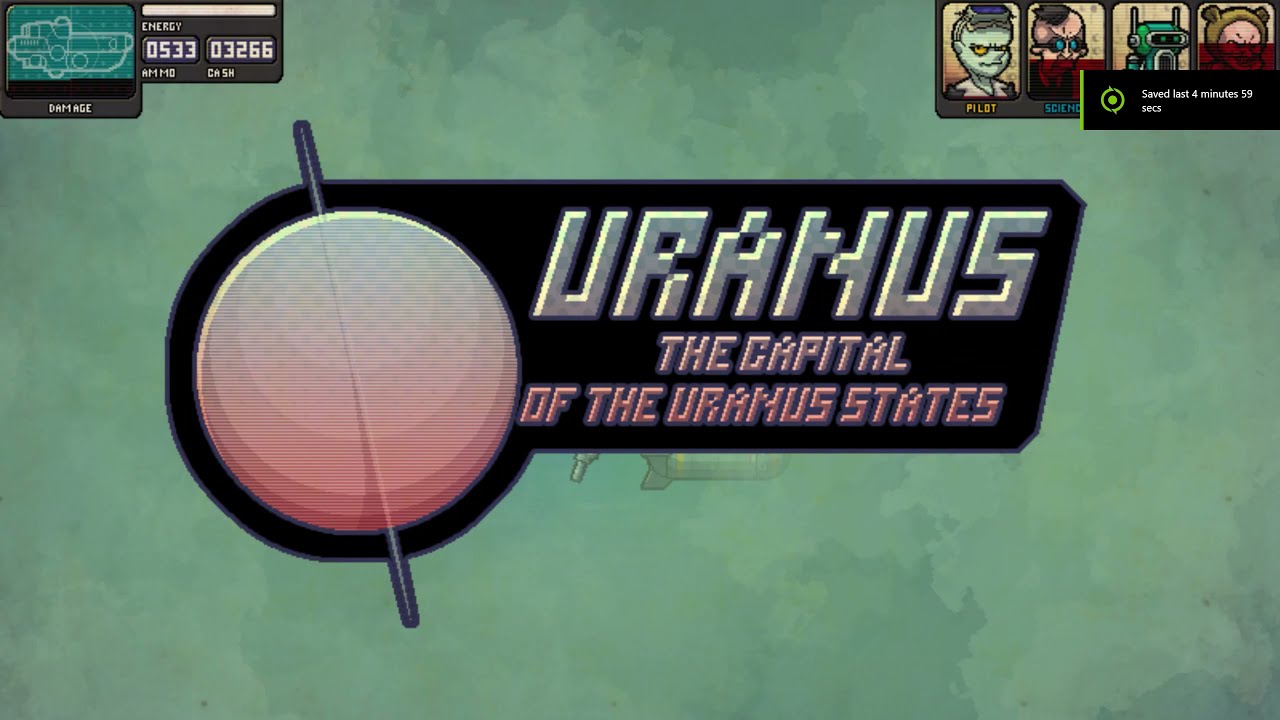 Like the previous boss, shooting its head off will end the fight quickly. Make sure that you have a high DPS weapon such as Space Chainsaw on your back or top.

Probably the easiest boss. Just hide behind it, and shoot at the pilot’s antennae. Or let it eventually blow itself up with the homing missiles. 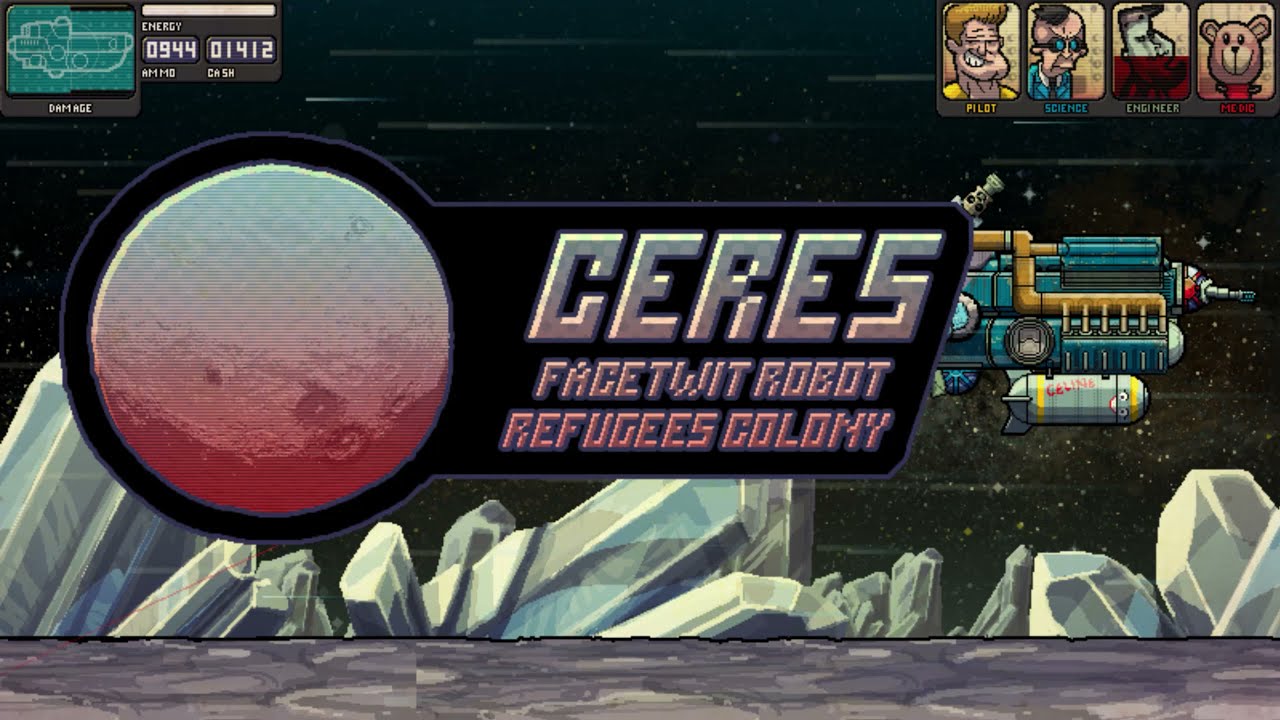 This boss has three phases.

First one has shields.

Second, after you enter atmosphere, has its shields down, but shoots bolts at you.

Third one is a separate ship with a minigun in front. 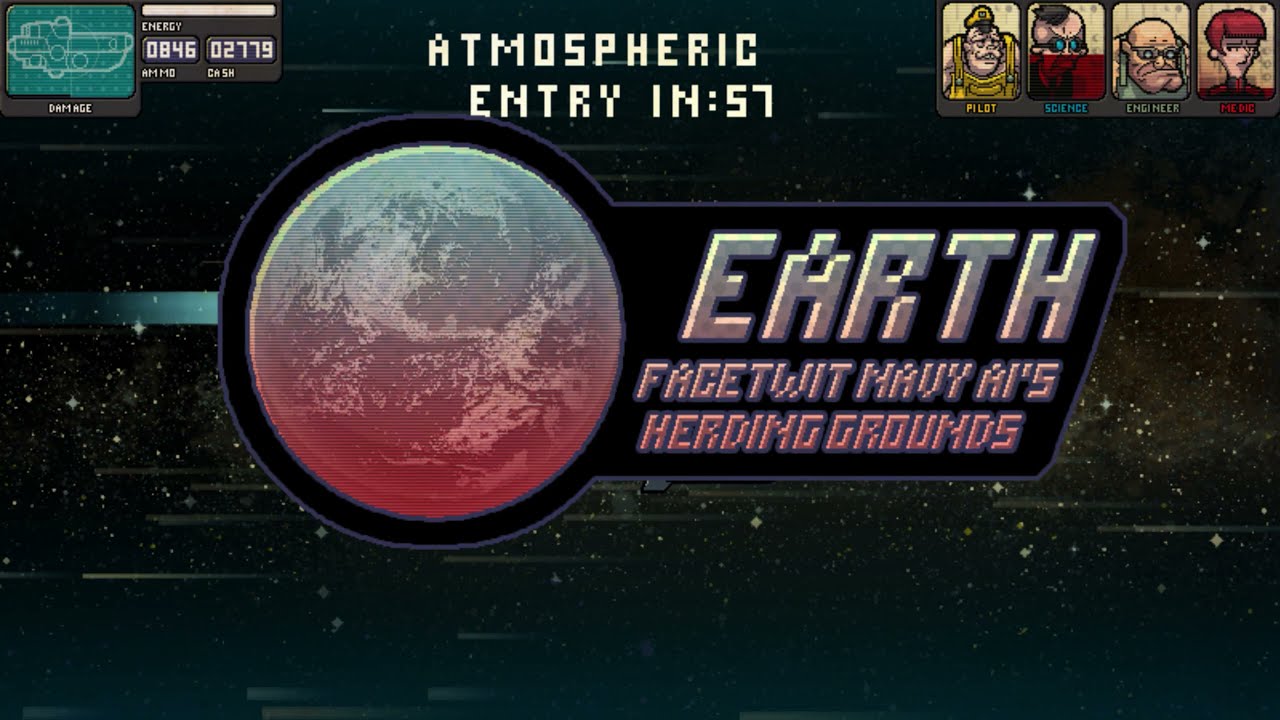 You’ll meet a miniboss if you land exactly in the middle between two planets. 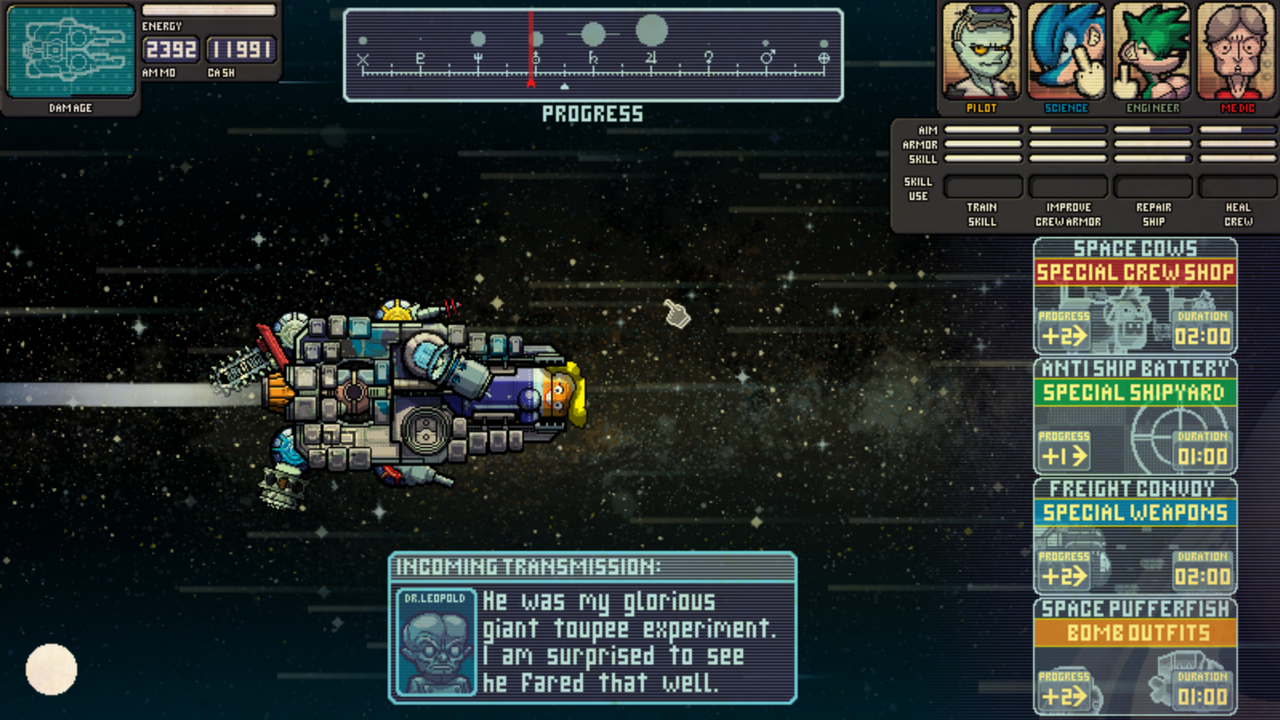 “I banished him after he flooded my lab with vomit”

This miniboss is akin to Antiship Battery, as it will telegraph where it is going to attack.

“He was my glorious giant toupee experiment. I’m surprised to see he fared that well”

Don’t get in front of it, as its double miniguns are extremely dangerous.

Top and bottom are blind spots.

This mini-boss doesn’t appear in the achievements, so I have to guess its name.

Shields that can be purchased from Special Shipyard don’t have names as far as I can tell.

“The shield will damage other ships”

“The shield will heal crew by burning items”

“The shield will damage enemies’ engines”

Causes explosions around the enemy engine.

There is a few second cooldown for that effect.

This will destroy the enemy vessel after a few explosions.

You’ll know that a special effect of the outfit has been triggered by bomb shaking and stars flying out of it.

“You will get paid a bonus after multiple ship explosions”

“Celine will repair your ship after multiple ship explosions”

“Celine will improve your crew’s aim after each level”

“Celine will heal your crew after multiple ship explosions”

“Celine will convert any debris that you pick into cash”

“A random explosion will occur after blood is spilled”

“Your energy will recharge after multiple ship explosions”

Here we come to an end for Fission Superstar X Gameplay Tips for Beginners hope you enjoy it. If you think we forget something to include or we should make an update to the post let us know via comment, and we will fix it asap! Thanks and have a great day!