How to play and build a lean deck, based on the trickster.

This is a very versatile deck that abuses all cheesy mechanics.

It is for chess players : you need to think all of your moves ahead.

We are building a small deck based on the trickster.

This guide helps you get the following achievements :

+ quickly reliable, does not rely on luck after the first act

+ versatile, a solution for every enemy

+ requires little money throughout the run

At the start, the goal is mostly to get rid of bad cards. This has priority over upgrades. There are not so many cards to upgrade, ponder and wall kick should be the priority after removing cards.

Make sure you visit every gym, especially early on.


We have wall kick as our big damage card, so we want to pump up max combo points whenever possible.

Momentum starts at 4 which is plenty, but getting another point or two can’t hurt, it will make our card draw (ponder) more powerful.

More attack points are always great, but not necessary on this build.

This is the tricky part. Do not play too fast, try and figure out the whole sequence before you play the cards.

Try to stay along walls without being cornered. You have great synergies right from the start with push + wall kick, or back slam + wall kick. Make sure you have no open door on the wall in the tile ahead of you so you can wall kick.

Use your arsenal of grapple, swap, push and back slam to position enemies so they kill each other or get expelled from the board.

This build is squishy and has no block or dodge, so avoid getting hit.

Cards to remove in priority:

– hunker down (trades momentum for block)

– absorb attacks (provides block, adds momentum when you get hit)

– break the limit (free card, 12 damage, adds a slow bleed to your deck)

– dash (move 2 tiles in one direction)

– improvisation (provides a random attack, costs 0 on first turn it is played)

– chain strike (provides momentum when used as a kill shot)


As you can see, we remove half the starting deck, leaving 8 of them in the final deck.

You obviously cannot remove all of them right away, it’s alright if you keep some of those for the first 2 or 3 acts.

+ 1 throw or shoulder throw. This is used for crowd control and whittling down annoying enemies HP pool. The other throw cards rely too much on free available tiles around your target, not recommended. I prefer throw since it costs 0 momentum and the deck is very mobile as it is.

+ 2 stuns. Ideally one of those is pocket sand (low damage, stun through block, gives an achievement if you kill with it). Throat punch and stun darts are both good options.

+ 1 or 2 damage cards. I like knee kick (damage + push, cannot be countered) and jumping back kick. First one is good for positioning/pushing out of the map but is rare, second one has good damage and uses combo points without removing them. There are plenty of other options.


One could also make a case for steel self and intimidation.

– any kind of combo finisher. We want combo as high as possible all the time for wall kick


This is a final screenshot of such a run. As you can see, I ended with 14 cards, only 5 of them upgraded. I lost some hp on the final fight from letting the boss push me into walls. 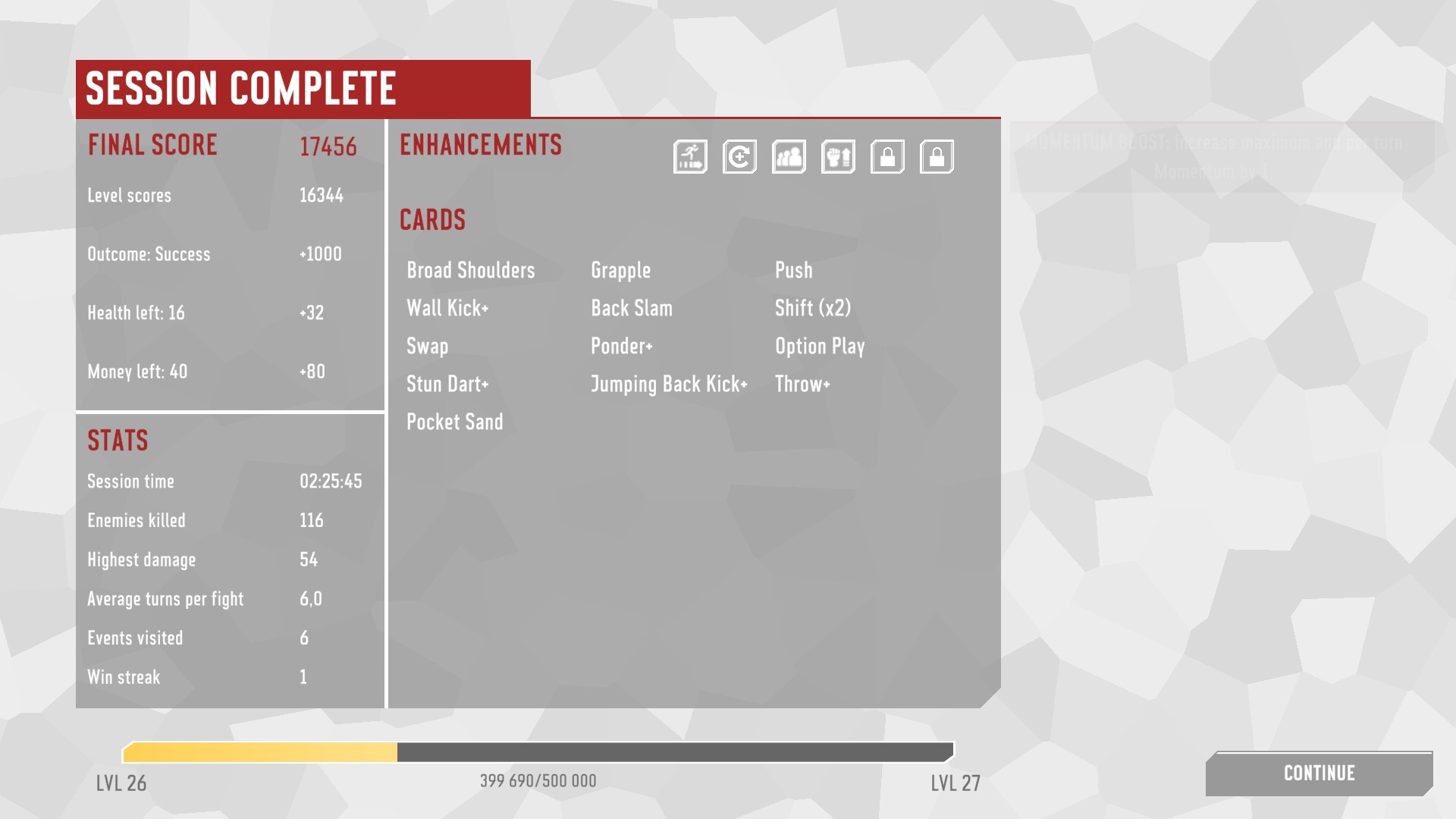 You can remove cards in a different order, it depends on what you find. If you get an early option play or jumping back kick, you can remove quick kick earlier for instance.


You can bloat the deck a bit mid-game, going over 16 if you find the perfect cards.

Beggars can’t be chosers. If you find an early tackle card and other options are terrible, take it. You can replace it with throw or shoulder throw later.

No enemy is immune to stun and grapple, abuse that.

An enemy who can adjust facing you will not actually face you if you grapple them as your last action.

Throws are great for the first 3 bosses, they help crowd control on the 4th, and only one stance of the final boss is immune to it.

Upgraded ponder helps cycle your cards fast. With stuns, throw, pushes and grapple, you should always have a solution for every enemy.

Broad shoulders adds decent damage in the long run, upgraded or not. It could be removed, but you have so many cards to get rid of already.


I hope this helps!

Here we come to an end for Fights in Tight Spaces Map Strategy + Game Mechanics + Deck Building hope you enjoy it. If you think we forget something to include or we should make an update to the post let us know via comment, and we will fix it asap! Thanks and have a great day!