So you’ve beat the game up to the current point. You’ve helped the Free Worlds and the Wanderers, discovered the Hai and Remnant (and likely the Coalition), and you’re sitting around thinking “how can I make the most money easily, and also maybe get some more jump drives?”. Well, this guide will show you a great way to do both of those things.

If you have a fleet that has survived through the current (0.9.12) end of the Wanderer campaign (and can last any respectable amount of time against a Kor Sestor warship), you should be able to do this easily. Just go buy some freighters and you’re good to go.

**NOTE THAT ALL SHIPS MUST BE EQUIPPED WITH JUMP DRIVES** 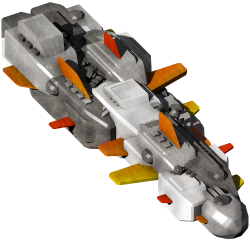 Of course, to lead your fleet you must have a flagship. Ideally, this ship has good shielding and weaponry, but still retains a respectable amount of cargo space. For this strategy to be successful, your flagship must have at least 200 cargo space, though it is recommended to have more. Upwards of 500 is not really necessary though (although go for it if you want to). A Bactrian minmaxed for crew bunks will be useless for this (with the exception being if you want to try and capture the Raiders. However if this is your plan you are reading the wrong guide).

Your flagship can really be any ship you want (provided it fits the above criteria), but I’d recommend something in the Heavy Warship class just to be safe (and most people will probably use a Bactrian regardless). When outfitting this ship, keep as much space as possible available for cargo without compromising other areas. For example, don’t bother replacing your nice fancy atomic engines with the little Coalition thrust modules so you can cram in more cargo expansions. Just make sure to leave some cargo space available when you’re upgrading your ship.

When testing this, I used a Bactrian with a Sunbeam, two Point-Defense Turrets, and three Ka’het Ravager Turrets paired with a Dark Storm shield, along with various other upgrades (including Hai atomics), which ended up giving me a total of 430 tons of available cargo space. This is on the higher end of what you would need, but works quite well as a rather nicely balanced setup in most other situations as well. 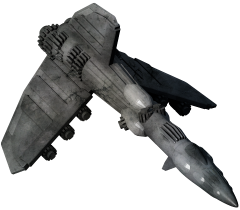 Your escort ships are the ones that will do the majority of the fighting, so choose them wisely. Ideally, they should be capable of disabling a Korath Raider (our target) or similar level of ship in less than 15 seconds. Shield Beetles, Hurricanes, or upgraded Kestrels all make good escort ships for this situation. Pick something that can dish out damage while being able to take a pounding itself without being destroyed. Any escorts that you already have that managed to survive to the current end of the Wanderer campaign should work just fine for this.

When outfitting your escorts, feel free to use all of the cargo space for outfit expansions. Unlike the freighters (obviously) and your flagship, the escorts don’t need to have room to carry cargo. They’re only here to fight. As the goal is to disable the target ships without destroying them, any projectile weapons are out of the question. Stick with lasers only.

For my escorts, I used Kestrels (the shields variant, if you were wondering) fitted with a combination of a few Ka’het turrets and multiple Sunbeams. This setup, when paired with the Dark Storm shielding, produces a ship that, when multiple are used, can disable or destroy a Raider in under ten seconds. In fact, the eight(!) that I had with me when testing were a bit overkill, outright destroying a good number of Raiders before I got near them. 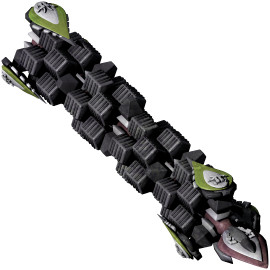 The third component of this strategy is the freighters. You want as many freighters for this as you can possibly get. Ship choice is up to you, but I would strongly recommend the Deep River as it has the largest cargo capacity (but if you want to use, like, Behemoths or something, go right ahead). Pretty much the only things the freighters need are good shields, decent steering (preferably good engines too), and jump drives. The rest is up to you. Feel free to minmax for cargo space, or keep some weapons on the ships if you want. Either will work.

As far as weaponry goes however, keep in mind that really all that the freighters have to do is lurk near the combat area without getting killed, so going without weapons is fine as well. However, if you plan to use the freighters for situations other than making stacks of cash via stealing from the Korath, a gun or two could be useful.* Again, lasers only.

I used several Deep Rivers fitted with a pair of Sunbeams, Type 2 and Type 3 Radiant steering, and a Type 2 Radiant thruster, with Bright Cloud shields and two cargo expansions (along with a few fuel pods and some other stuff), giving each freighter a maximum cargo capacity of 1,170 tons. It’s easily possible to get more space, however.

*Citation: Theoretically, if you have enough freighters, you wouldn’t even need the dedicated escort ships and could just mount some guns on the freighters themselves.

The ships you will be attacking are the following: 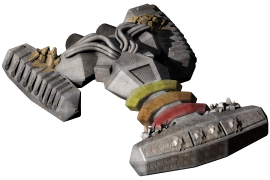 A rather brutish ship used by the Korath Exiles, the Raider typically is outfitted with the following:

Small fightercraft carried by the Raiders, these are usually nothing more than minor annoyances. They are outfitted with the following:

Your target system is Kor Ak’mari. This system, though in Korath space, is not directly connected to any other systems, so it is only possible to reach this system via the use of a jump drive. This also means that despite being a Korath system, the only ships that will appear in the system are Korath Raiders and their Chasers, so you don’t have to worry about simultaneously defending yourself from a World Ship as you do this. 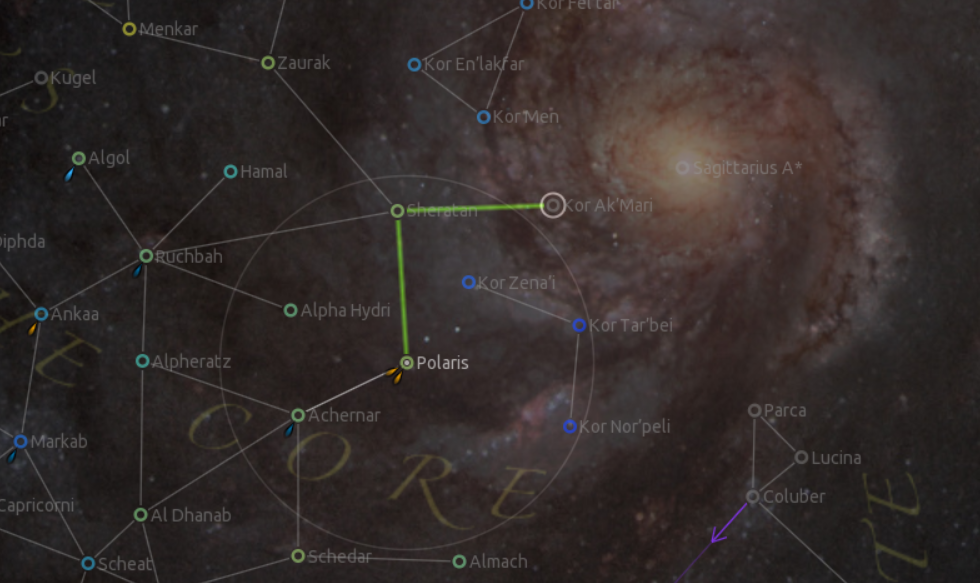 Once all of your ships are in the system, wait around for a Raider to jump in. They most often appear in the center of the system, near the star. The system has a moderate concentration of silicon and aluminum asteroids, so mine those if you get bored.

When a Raider jumps into the system, use your escorts to disable it as quickly as possible. Disable (or destroy, if you have to) the Chasers first, before focusing on the Raider. Otherwise, it is likely that your escorts will inadvertently destroy the Raider while firing at the Chasers. If you do end up destroying the Raider, just wait around for another one to jump in. There’s an endless supply.

After you have disabled the Raider, you may be tempted to board it right away. This is the wrong way to do this, and will lead to you losing out on a lot of your profits. Instead, simply hover over the disabled Raider. Before you board the ship, tell your freighters (and other escorts if they have available cargo space) to gather around your flagship. Wait until they are moving back and forth under you before boarding the Raider, like so: 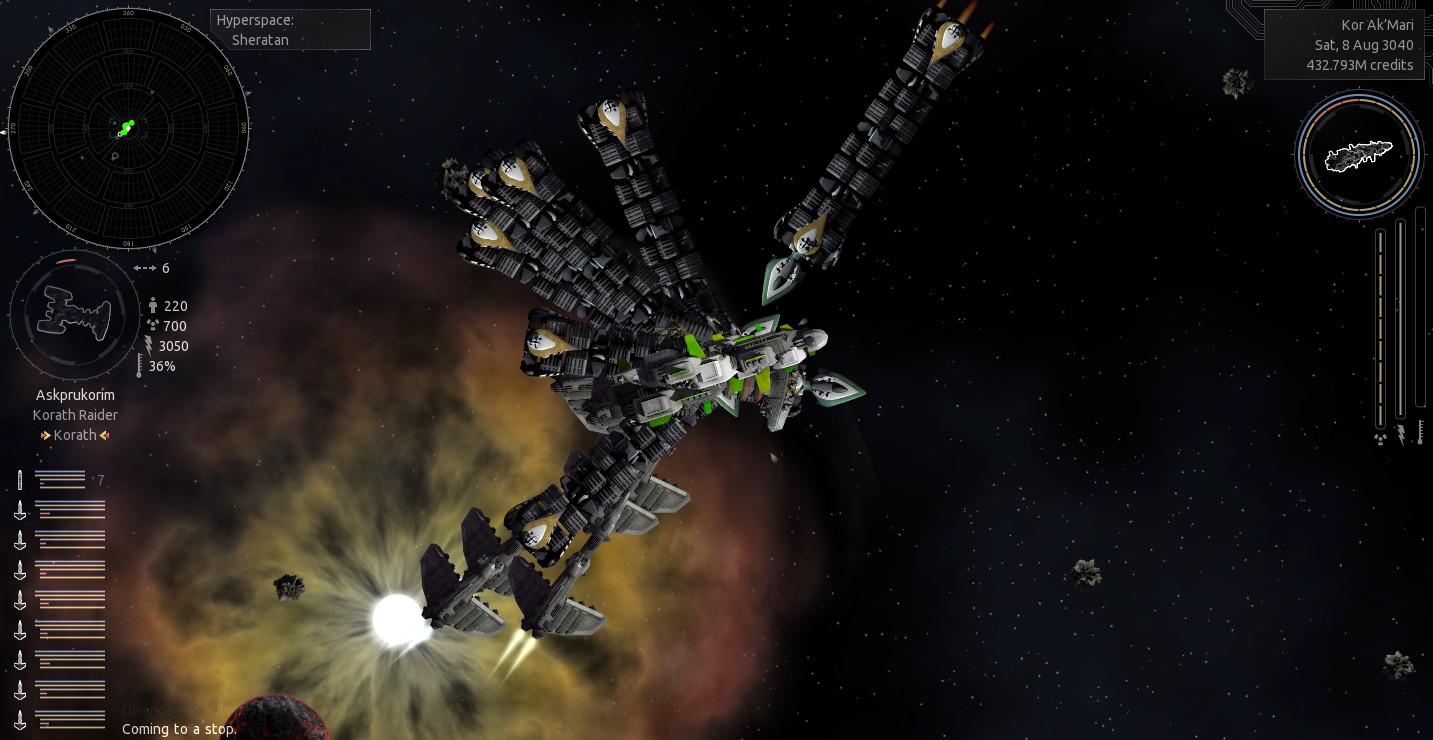 Loot the Raider’s parts. When you’ve reached your ships maximum cargo capacity, hit “I” (without detaching from the Raider), and dump your ship’s entire cargo. 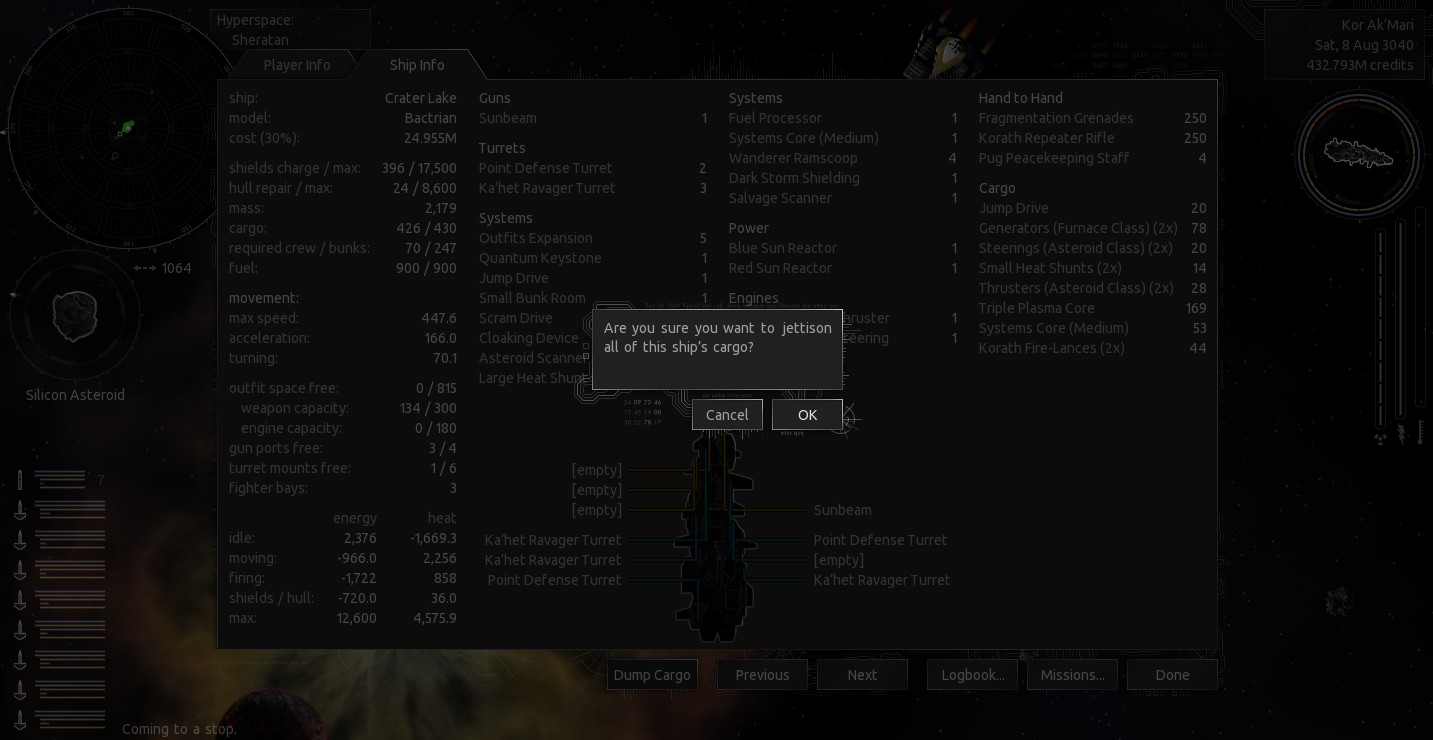 (Alternatively, you can choose to only dump specific parts of your cargo if you would like to hang on to some of it.)

This should free up enough space for you to continue looting the Raider. Repeat until you have completely stripped the Raider, then dump your cargo a final time. When you exit the boarding menu, you should see a flurry of messages saying that your freighters picked up all the stuff you dumped (this is why it is important that they are directly under you when you board – so they catch everything). 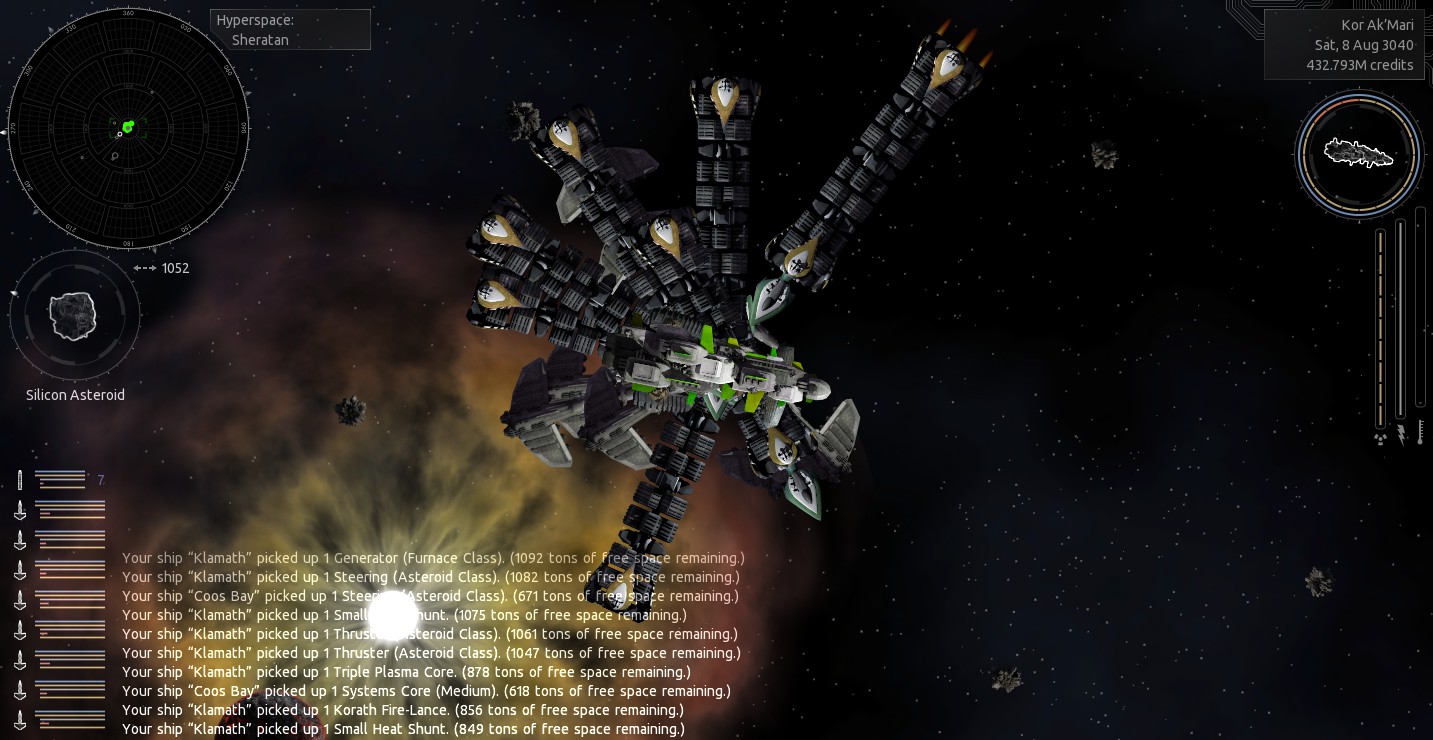 Now, all of the parts (and possibly cargo) you acquired from the Raider is spread across the vast cargo holds of your various freighters. Don’t worry if some stuff floats off into the infinite void of interstellar space. There’s plenty more around. Proceed to the next disabled ship and repeat the process.

Once you’ve stripped the parts out all the ships in the system, destroy them (or try and capture them if you really feel like it), and wait around for the next Raider to show up. Once it does, repeat the process described above.

Continue disabling and stripping the Raiders and Chasers until all of your freighters are fully loaded with parts (fill your escorts too if they have space). This process may take a while, but it will be worth it.

Once all of the freighters are filled with Korath stuff, loot a few more parts to fill the remaining space on your flagship, then head back to Human space and land on Polaris (the nearest planet with an outfitter). Sell all of your cargo except the things you want to keep (like jump drives), and find something to spend all of the money on (more freighters, maybe?).

Assuming an even distribution of cargo, each full freighter (at least in the case of a relatively stock Deep River) should net you between ten and fifteen million credits (at a rate of a little over eleven thousand credits per ton on average).

Here we come to an end for Endless Sky [Spoilers] Guide to Endgame Korath Farming hope you enjoy it. If you think we forget something to include or we should make an update to the post let us know via comment, and we will fix it asap! Thanks and have a great day!