The answer to every question in the form of “What would be the best weapon for an X build?” is in here, check it out!

I painstakingly hand recorded over 2700 lines of data – each and every weapon’s (and shield’s) stats AND the stats of each and every different infusion of each of those weapons (and shields) which COULD be infused! (I do not recommend repeating the feat) All of them at max upgrade level so as to facilitate apples-to-apples comparisons, while sitting at the hard cap of 99 in every stat (other than Endurance)

I finished the game with minimal cheating (mostly restoring lost runes) and farmed up all the dropped weapons and armor I could, then I went offline and cheated in all the ones I couldn’t get due to bugs, limited number of Rememberances, mutually exclusive items, or simple user error (Dung Eater violated me)

Once I made sure I had EVERY item legitimately obtainable in the game, I cheated again to make them all max level AND max out the character attributes (the absolute max rune level is 713 btw) I only left Endurance at 40 for “weapon swings till 0 stamina” testing

However, this save is for testing purposes ONLY, I do not use it online and I’ll restore my clean(er) save if I ever do go online again. Only hack games for the good, m’kay?! 😛

Why did I pick these values? Well 40 Endurance is right about the level of stamina most people would have, or so I figured. 99 isn’t that much different than the last soft cap of 80, and people who call 80 the “hard cap” annoy me so I set all my other attributes to the real hard cap out of spite 😛

Why should you trust what I say over anyone else?

Because I always offer you access to the raw data for you to see for yourself.

Which is available here – [dropbox.com]  (This data was recorded with v1.03.2 of Elden Ring)

Since this information was hand recorded, there is always the possibility my finger slipped and eg entered a 45 instead of a 54 and I never noticed or something else like that. I do not believe I made any mistakes, but I am only human so if you find any errors just let me know and I’ll re-check the weapon.

That said there are errors in this data on Fromsoft’s side and not mine which I try to point out below. I’m sure Fromsoft will get around to fixing them… eventually…

And of course any patch always has the chance of changing something NOT MENTIONED in the patch notes >.>

DPH vs DPSb Pros and Cons

DPH is easy; our attack power is a direct measure of this value, but DPS is not so easy. DPS requires careful measurement of the time variable – small measurement errors would result in widely varying results. Thus, I have to approximate DPS with DPSb – count the number of swings each weapon takes to fully deplete the stamina bar, then multiply that number of swings by the attack power of one swing. In this way we can control the variables for consistent results; I only used light attack spam (L1?) without any pauses for stamina to regen and from a consistent amount of stamina (40 Endurance worth) without any talismans or other status effects.

Still, there are benefits to one over the other; DPH vs DPS, and I want to make sure you understand the tradeoff in picking one to favor over the other.

Reverse these for high DPSb weapons; they have much lower stamina consumption rates allowing for more swings which in turn cause faster effect buildup, but they suffer from a higher damage negation penalty and lower weapon skill and critical numbers.

So… which is better to focus on?

A: It depends. I think DPSb is generally a better measure of a weapon’s worth, but it is really up to personal preference. If you are parrying a lot or really like weapon skills, then maybe you should focus on DPH more. I keep spreadsheets for both in the raw data link, if you don’t like the sorting I used for a given section in this guide – go check em out.

Blood Venomous Fang – The base weapon keeps topping lists because it has the lowest stamina cost per swing resulting in a whooping 20 swings till 0 stamina at 40 Endurance. Only Raptor Talons can match it for efficiency, unfortunately for them this one is just flat out better. With a multiplier like that, at least by the numbers, this is the single largest bleed buildup per stamina you can get, plus you get poison at no extra cost!

Blood Fingerprint Stone Shield – Bleed and madness buildup… who even needs a weapon?! Yes, this is a tad bit ridiculous, but people have done this before – wielded nothing but a giant shield and just smashed people into red goo with it. If it works like in previous games, you get constant blocking protection even while “attacking” with it and the only limiting factor is how long your stamina can hold out, you are going to need a LOT of Endurance…

Rapier + Antspur Rapier – The Rapier gives you 130% critical damage while the Antspur builds rot and w/e else you feel like infusing it with (just not Cold, that combo is bugged, but lets be honest it’s blood for both these weapons isn’t it?) Not for scrubs like me who never learned how to parry, if you are going to powerstance something this seems like a good combo to me

Great Stars – Heals you (or your mimic) on every hit, innate bleed buildup, and you can choose to either Cold infuse it OR keep it buffable to give it eg Bloodflame with Heavy/Keen/Quality. This gives you a bleed option which wouldn’t benefit from Arcane investments

Godslayer’s Greatsword – Surprisingly good stamina efficiency for a colossal weapon, it also swings like a weapon a size-class smaller than it is. This allows it to get really good damage numbers both in DPH and DPSb and since it is a colossal weapon most of its 2-hand attacks *ought* to be unparryable. Only downside is it will suffer a split damage penalty as each swing is reduced once by the target’s physical defense and then a 2nd time by its fire resistance

Zamor Curved Sword – Has a unique moveset which allows you to regen stamina WHILE attacking, and gives you access to frost buildup without needing to worry about a split damage penalty nor INT investment. Takes some getting used to since it is unique, but might also catch others off guard in pvp, unfortunately powerstancing it makes it lose the unique moveset – poop

Frost Weapon + Rivers of Blood – The weapon skill of the Rivers of Blood katana is going to get nerfed, but even so this combo allows you to build frost with the main hand and then reset it with the fire damage from the off hand giving you two sources of damage bloom – Frost AND Blood

Cipher Pata OR Coded Sword – The only weapons currently which do pure non-physical damage, they also get shield bypassing attacks

Lion Greatbow – Rivaling the Jar Cannon when used with Radahn’s Spear Greatarrows, this “hidden” launcher – ammo interaction could be the hardest hitting ranged non-magical option in game. Only thing the Jar Cannon has over this combo is that its hitting like a truck the moment you can equip it but has ZERO attribute scaling

* = NOT buffable; everything else IS

* = NOT buffable; everything else IS

ALL of these are buffable

Some weapons gain more AP from infusion than others.

Here are the top performers as compared to the same weapon without infusion.

If you want to see more, check the spreadsheet

Blood on an innate poison weapon DOES buff the poison buildup

Sword of Milos restores 5 FP upon defeating an enemy

And then there is the bug afflicted Cold Greathorn Hammer 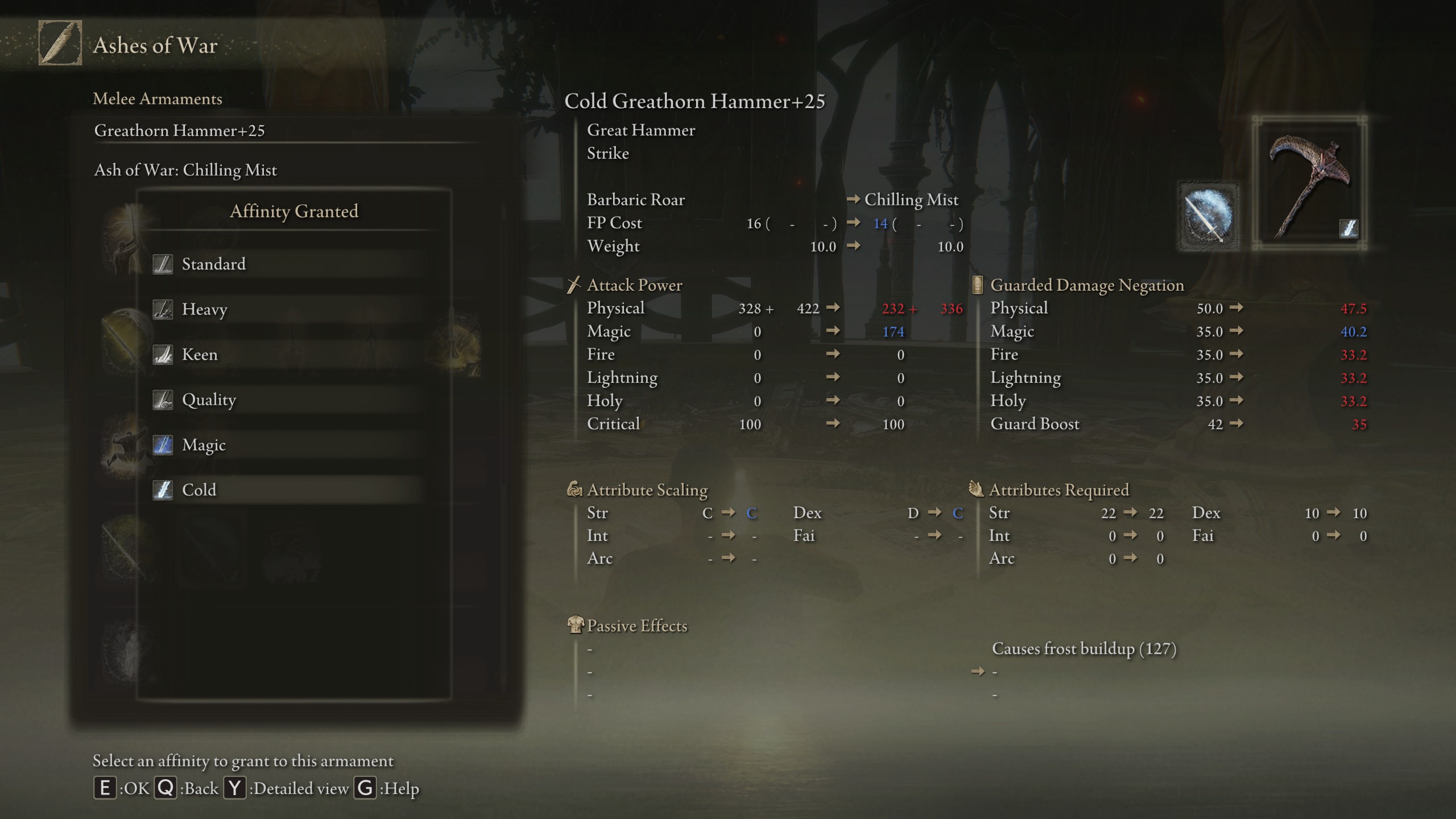 And then there is the bug afflicted Poison Scythe 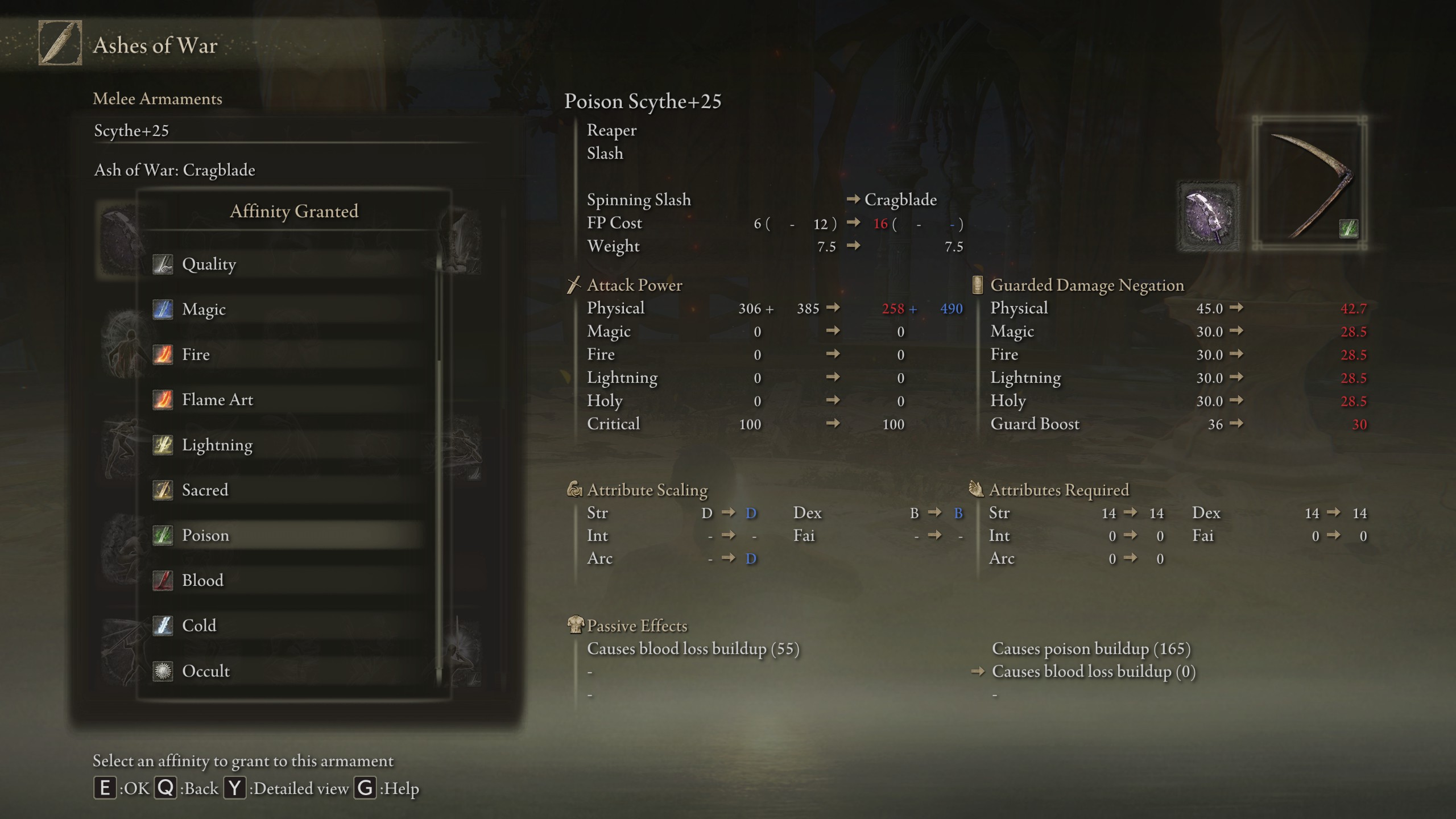 Blood, Poison, and Occult REDUCE rot buildup on the Antspur Rapier… but not the others… other than the bug afflicted Blood Rotten Greataxe 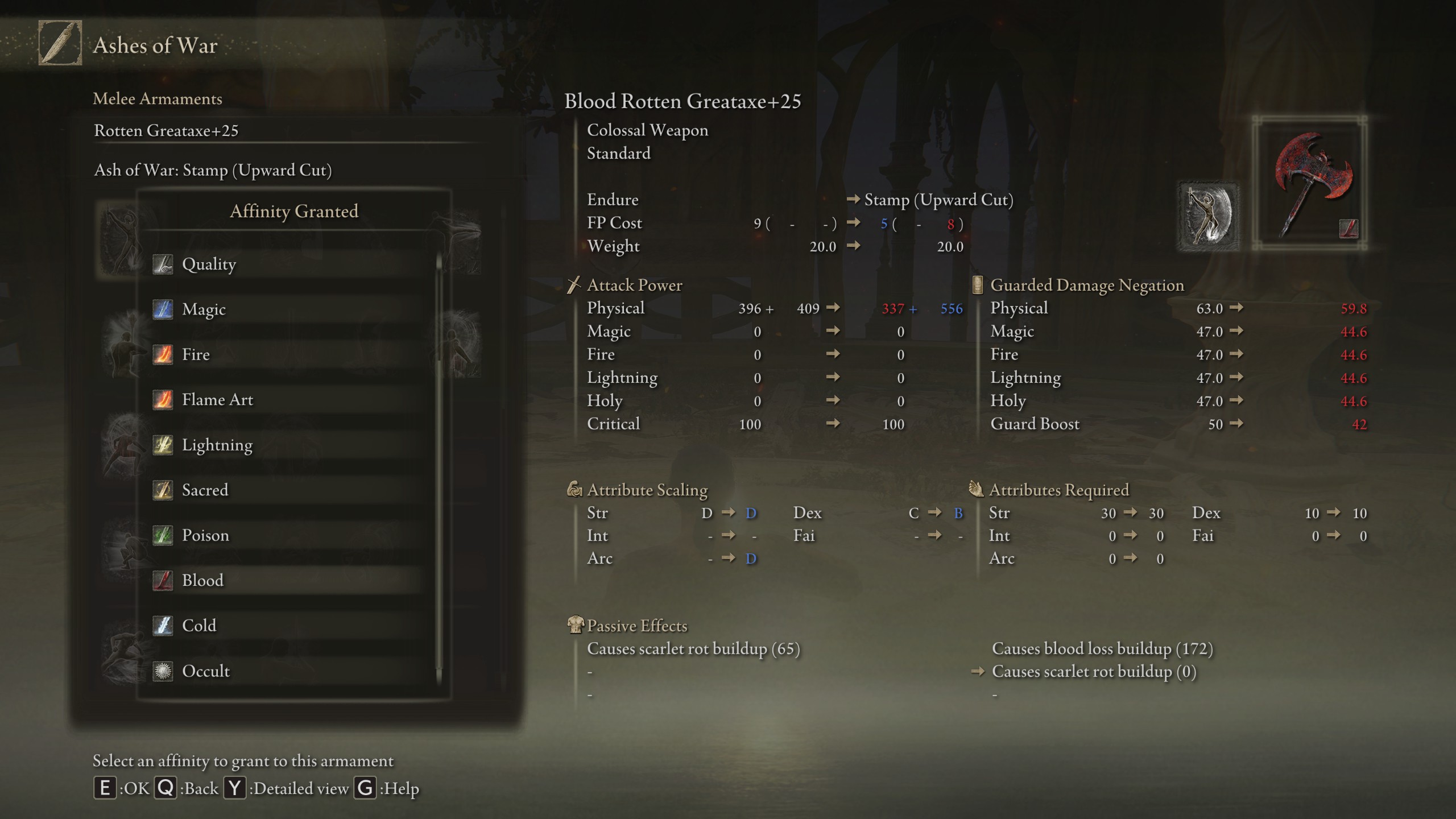 Likewise; Cold does not reduce rot buildup unlike its behavior with blood… except for the bug afflicted Cold Antspur Rapier 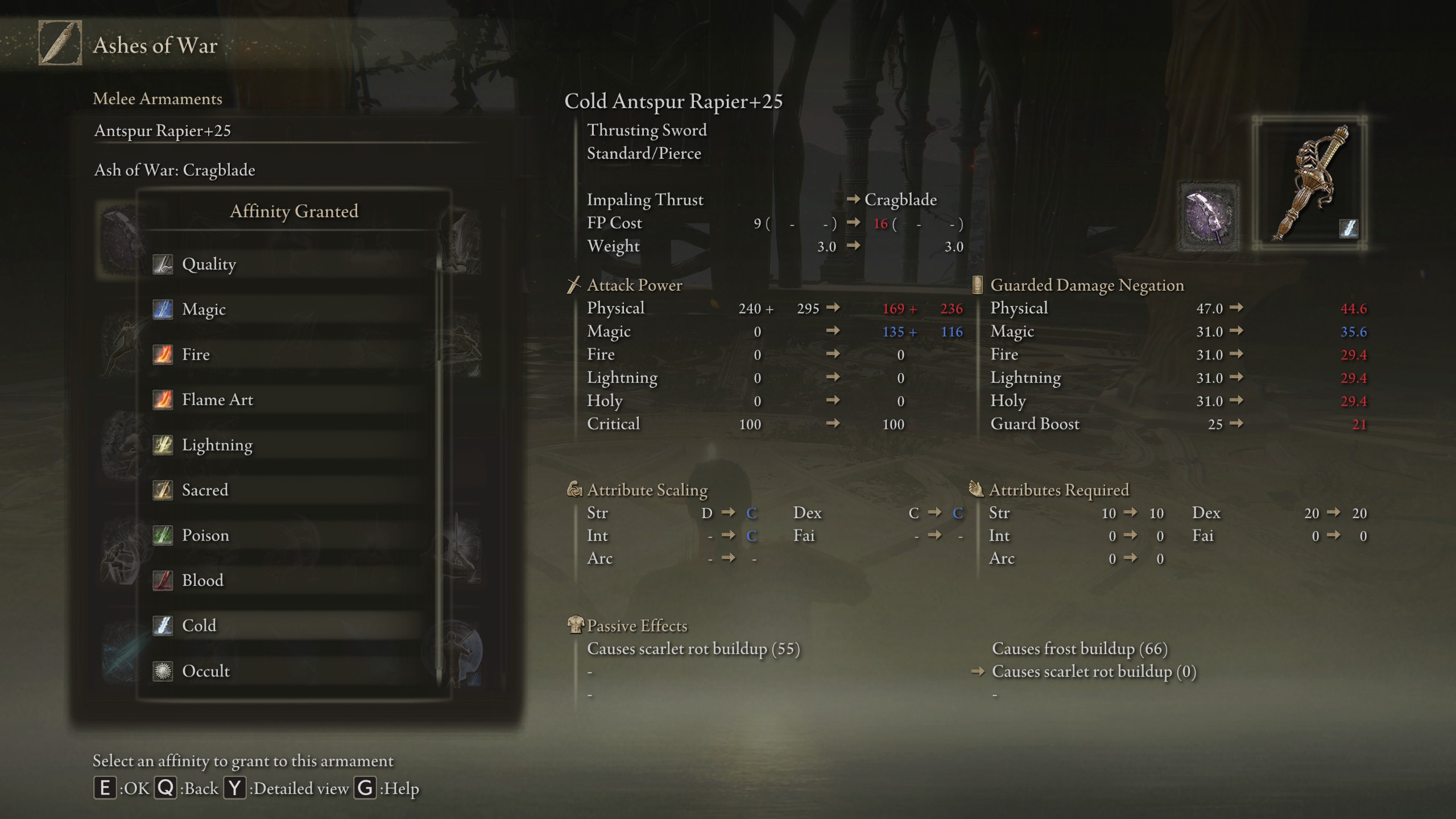 Sorted by Damage per Hit since ammo isn’t unlimited

Ammo damage IS included in the listed attack power 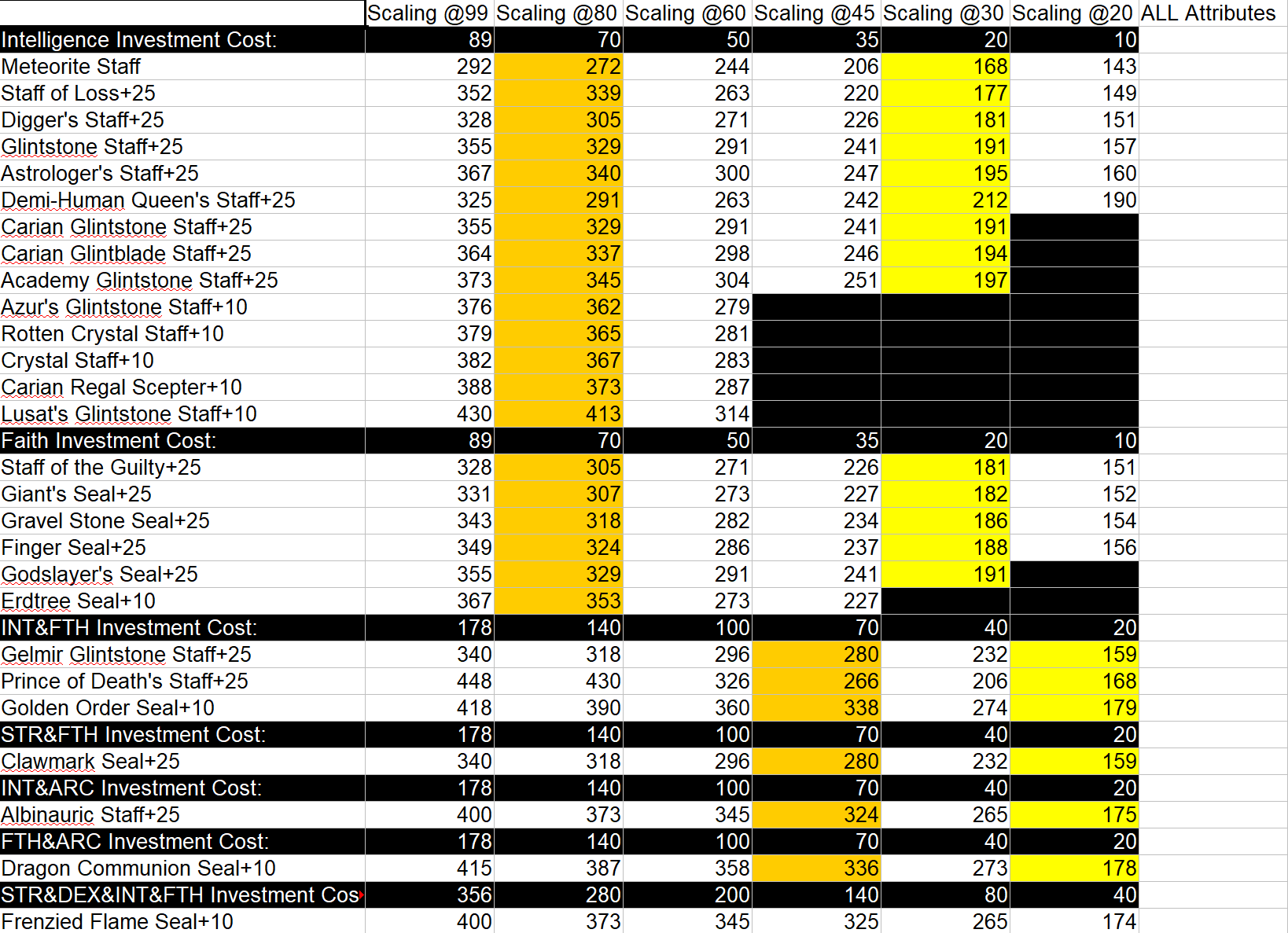 The highlighter was intended to draw attention to where an equal number of levelups were allocated between single-stat catalysts and dual-stat catalysts eg spending 20 points on one attribute could boost it to 30 while spending the same amount on two would leave them both at 20. This is exact for a Wretch, but only approximate for any other class.

However, the orange highlighter just happens to be the last soft cap for most of these catalysts.

Frenzied Flame Seal is also 30/45 but since it scales off of 4 attributes it requires quadruple the investment, if you want to use it – probably best to only go for the 30

If you can block with it, it is a shield… don’t question it

This section is not my own work, it was brought to my attention by 5chneemensch – [steamcommunity.com]  and credited to “Kikbow from Discord.”

The data sets mostly agree with one another, it would just appear that this Reddit source was running at ~2x the frame rate of the 1st source

NOTE: Whips and Flails are FULLY unparryable, but only some of a colossal weapon’s 2H attacks are unparryable

This is all for ELDEN RING Weapon Comparison and Analysis + DPH vs DPSb Pros and Cons hope you enjoy the post. If you believe we forget or we should update the post please let us know via comment, we will try our best to fix how fast is possible! Have a great day!