If you’ve never played a souls game before, this guide is for you. Learn the unwritten secrets of the Lands Between in this short and concise guide.

If you’re an uninitiated player to the souls games, there’s lots of unwritten rules that are probably unknown to you. Here are some things that I and many others instinctively know from previous Souls Games, which make Elden Ring easier and more enjoyable.

A few words before we get to the detailed advices:

You start with 3 HP (Flask of Crimson Tears) and 1 FP (Flask of Cerulean Tears) flasks – but did you know you can allocate these flasks yourself?

You basically have 4 flasks when you start, and YOU get to decide how many of these flasks will be HP flasks, and how many FP flasks. If you’re not a sorcerer, it would make sense to allocate all 4 of them to HP.

There’s 2 more things that you can do in the flask business: get more flasks, and upgrade your flasks.

Get more flasks with “Golden Seeds”, and upgrade them with “Sacred Tears”. You can do all of the above at your convenience at any point of grace.

If you struggle to find any of the above items before the first boss, google is your friend. Just don’t abuse it! It takes the fun out of the game. Rather, explore a bit more on your own, or play with friends. 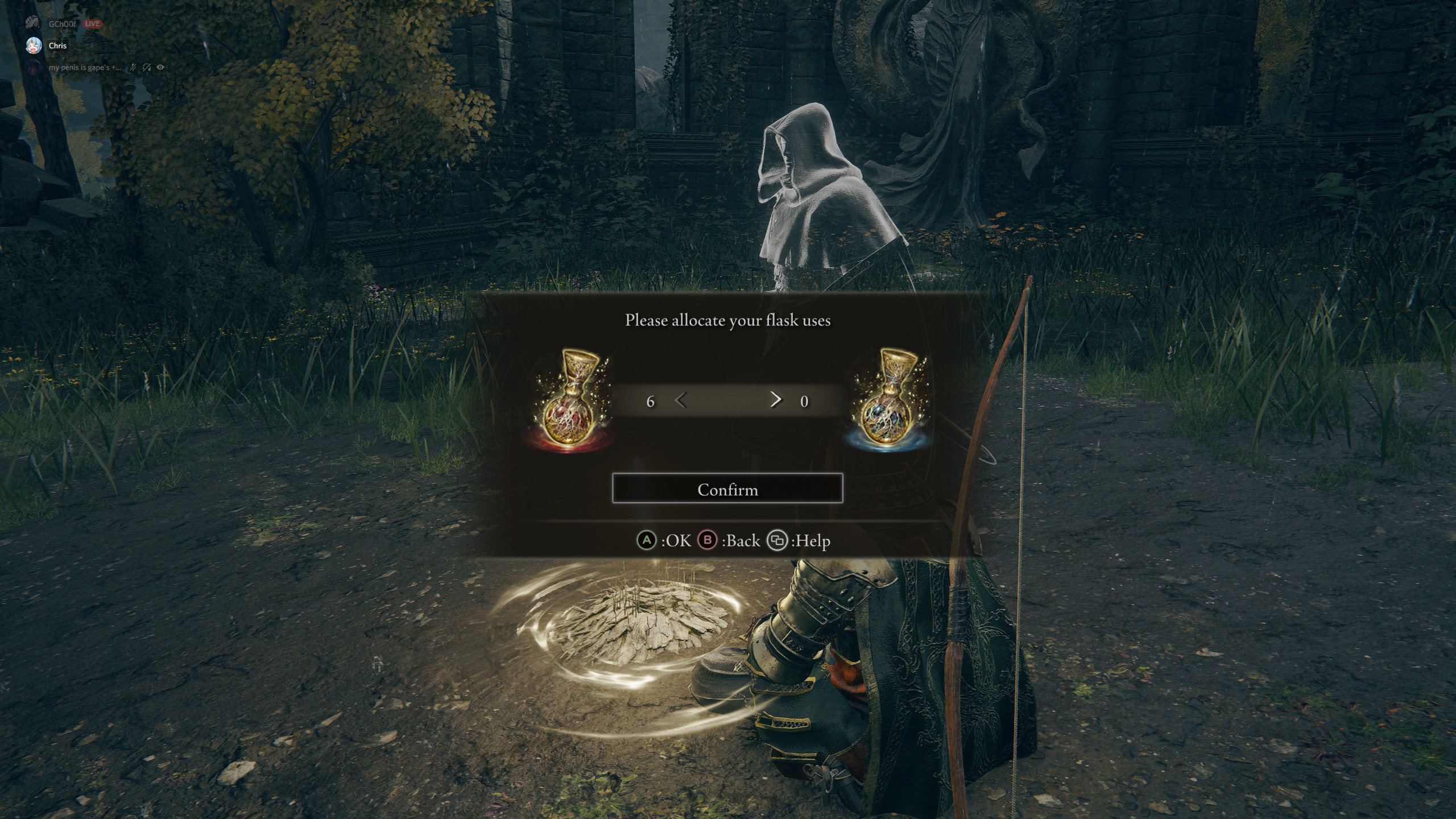 This is a “new item” for souls games, as far as I know. You can get this flask at “Third church of Marika”. Mix 2 ingredients together and get a new flask with 2 effects. I chose “regen half hp” and “boost attack” for mine. Can’t remember where I got those items. Like I said, explore and you’ll get some items sooner or later. Mix the ingredients at – you might have guessed it – any point of grace.

Easily missable as you have to travel back to the old church at night, and speak to the nice witch lady. Abuse companions as much as possible for taking on aggression from harder mobs and bosses. 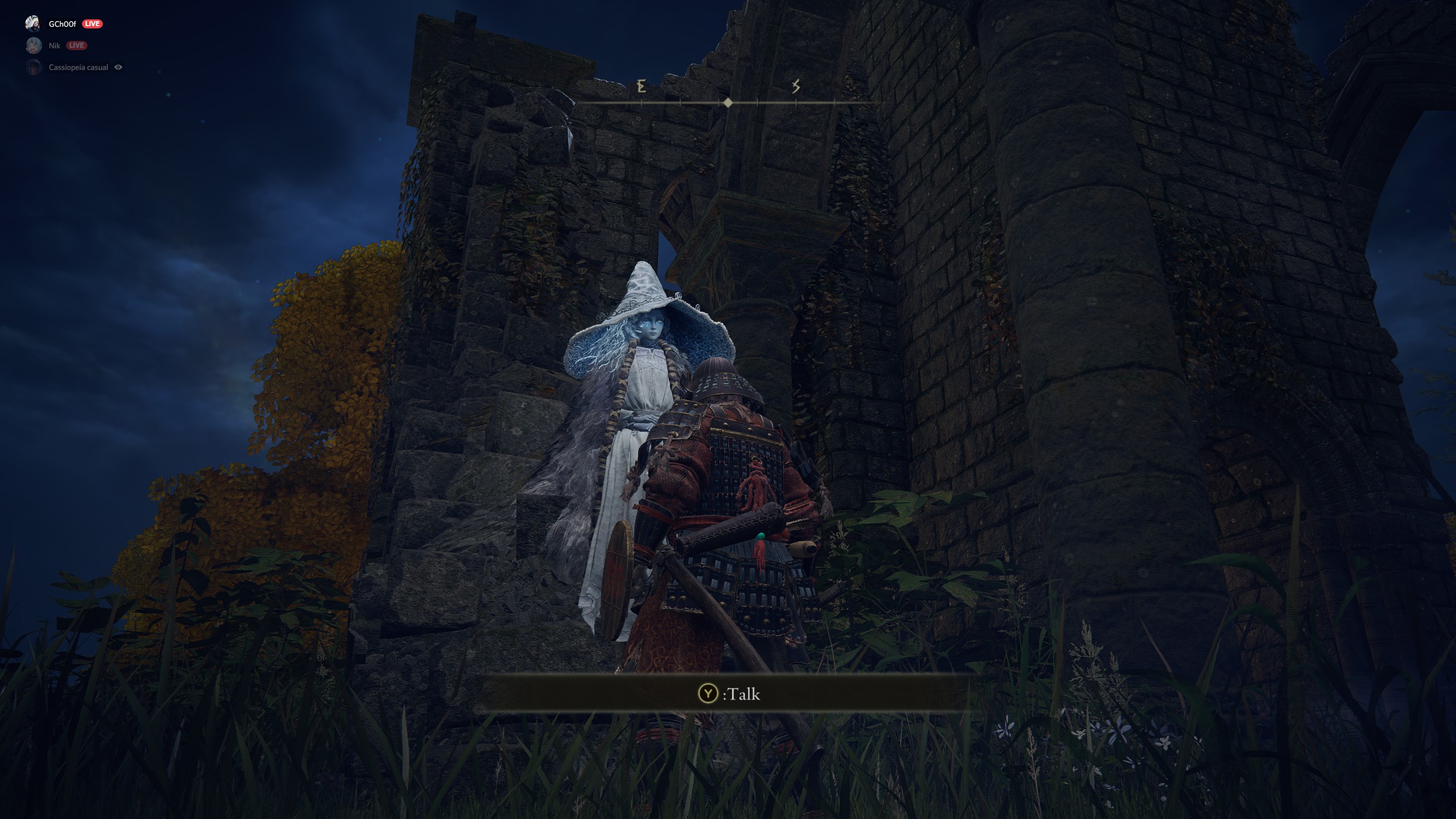 The most important thing you can do is upgrading your weapons at a smithing table as soon as possible. Get those smithing stones from around the world, and especially from Limgrave Tunnels, and upgrade your weapon to +3. Keep upgrading weapons as soon as you can. To upgrade weapons to +4, you’ll need to be a member of the roundtable. You’ll get there – just get to the first boss and you’ll see.

Some weapons also have a “weapon art” which you can use.

If you’re playing on console – which is the preferred method, if you ask me – press “triangle” or “Y” + L1/R1 (LB/RB) to toggle single/double handed mode, and press L2 (LT 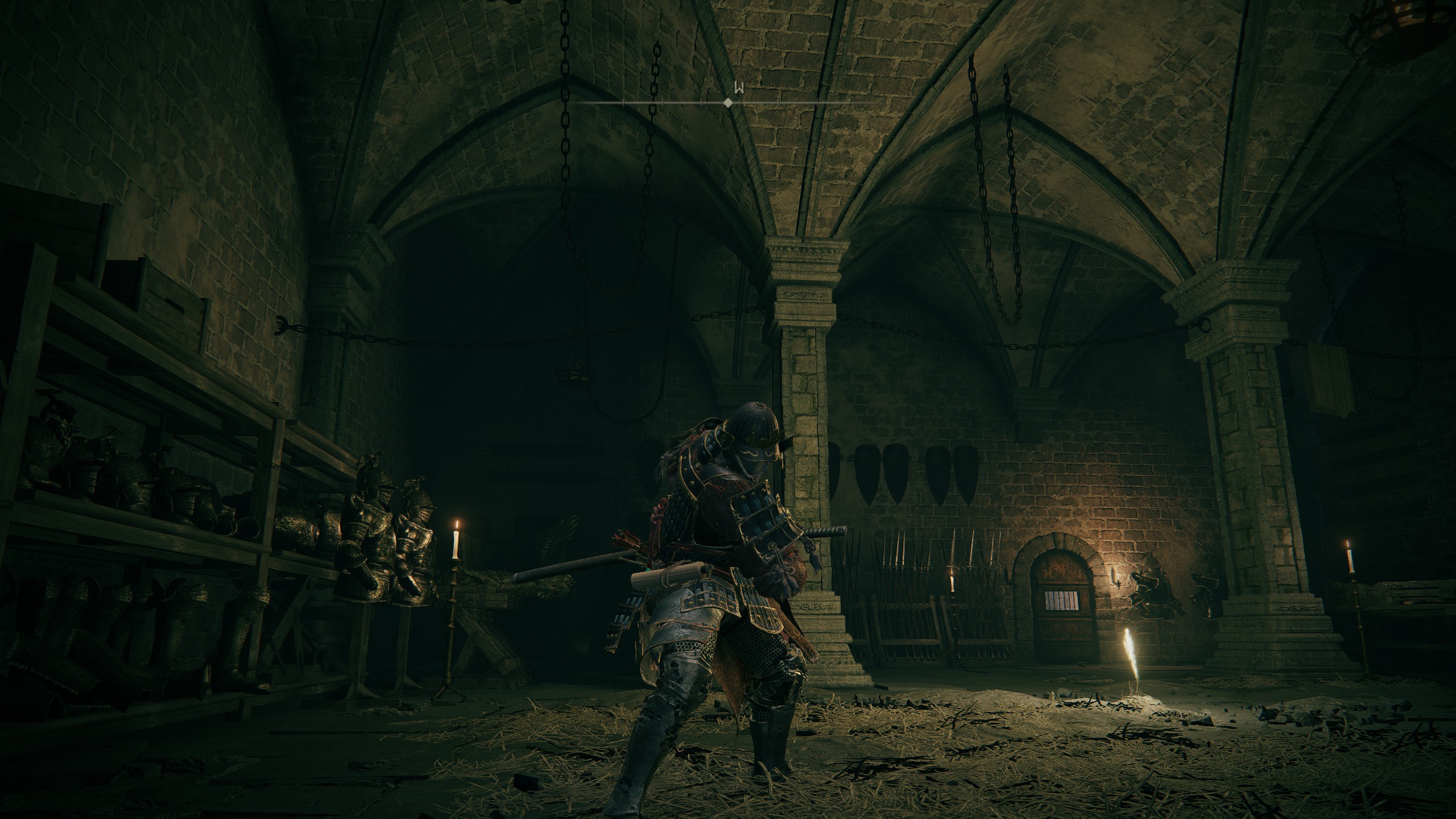 Take a good look at your armor. Learn what all the different stats do. In the beginning, the most important thing is physical protection. As you go on, resistances and poise become more important.

Be very mindful of the equip load – once it goes over a certain threshold (70%), and the stats page says “high equip load”, you’ll become slower, and you’ll begin to experience what is called “fat rolling”. Very hard to dodge anything when you’re fat.

If you want to wear heavier armour but you can’t because of the equip load, level up endurance. 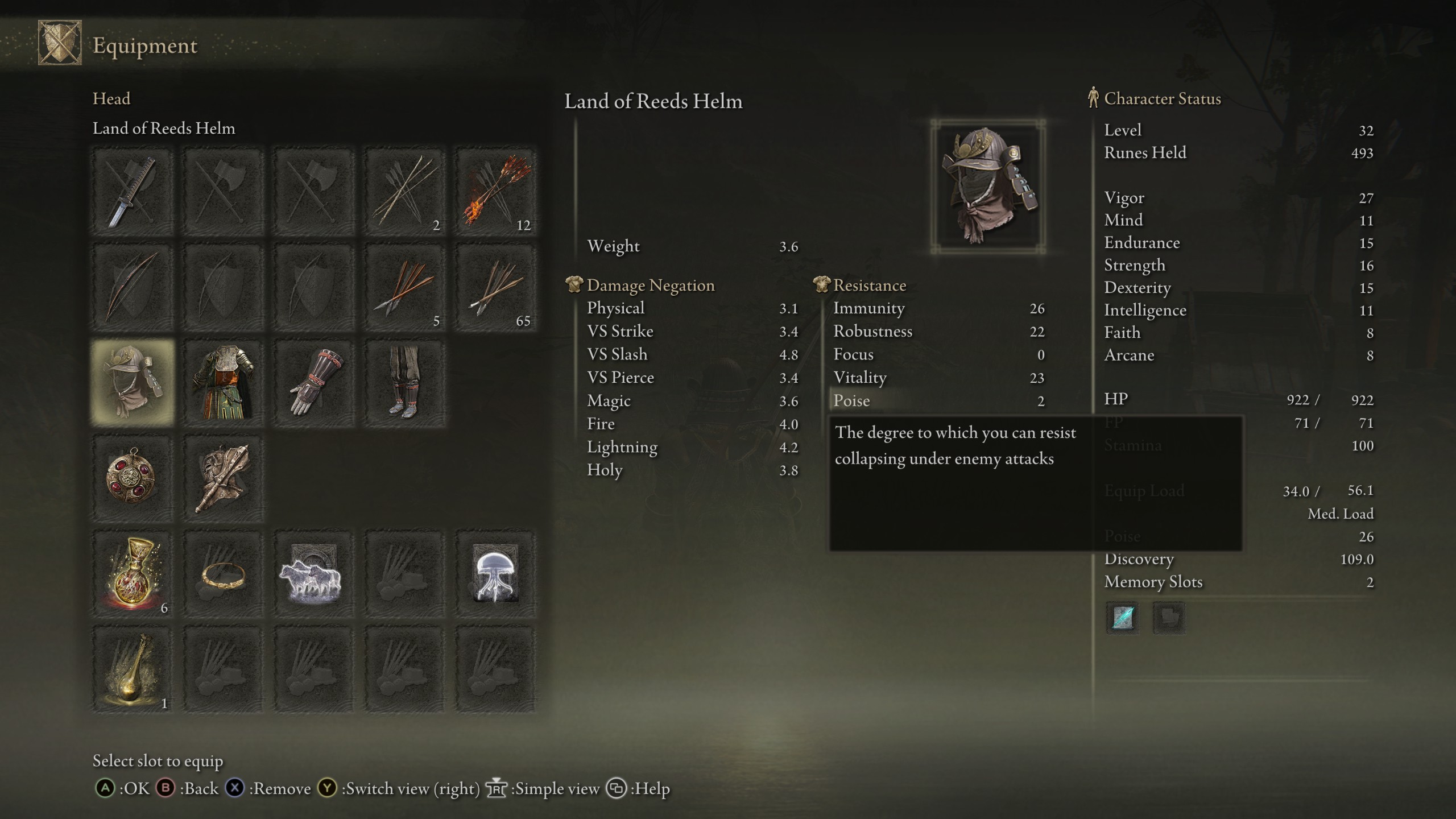 Level up your vigor. At least for the first 5 levels, put all of your stats in vigor. You need HP, because you suck. Once you know what you’re doing, level up something else. No, don’t put all of your first 10 levels in strength or dexterity. Put some points in endurance to be able to wear heavier armour, or some points in dexterity if you like combat on your horse.

Consume runes from your inventory for extra “souls” so that you can level up faster. They also work as a great storage of souls which you cannot ever lose. 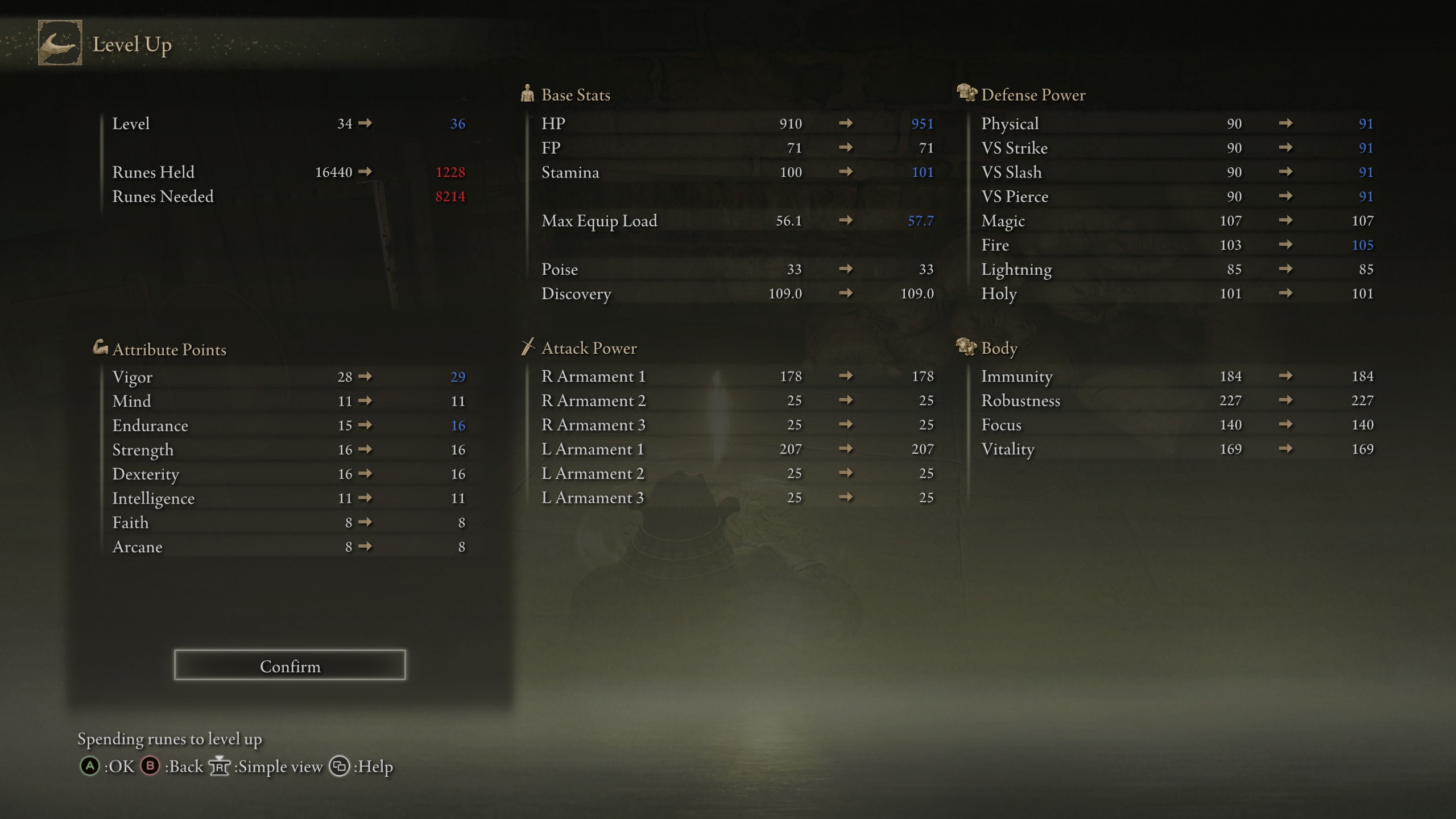 Git gud. Dodge at the right time. After dying 10 times, go farm some more and maybe put some more stats into Vigor. Upgrade your weapon. Upgrade your flasks. Get better armour. Repeat.

After dying 30 times, go on Wikipedia and learn about boss’ weaknesses (maybe the boss is susceptible to fire damage). Don’t tell your friends you did it. They don’t have to know. But always remember: learning how to dodge at the right time, and how to survive the attacks, will be the most important thing – not your stats! And before you give up, go into online mode, and summon some friendly phantoms to help you win the fight. Yuu need to use Furlcalling Finger Remedy in order to see other people’s summon signs. You can craft them from Erdleaf Flowers, so be sure to keep picking them up. 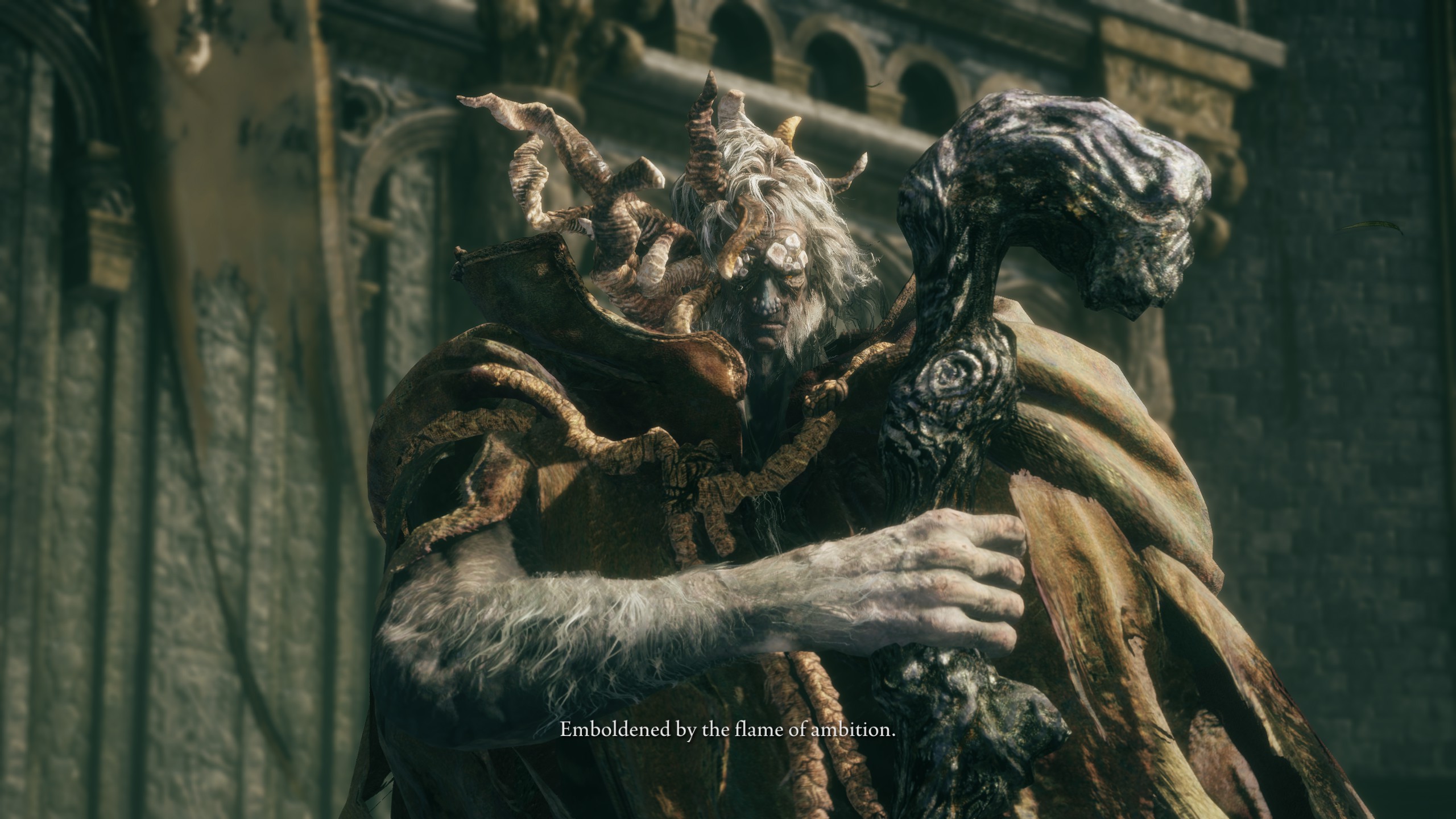 Talk to them and exhaust all their dialogue. Simple, but maybe not so intuitive.

There’s lots of “quests” that you can complete with various characters. Some will join you at the roundtable. Some will give you certain items, abilities, and so on. Make sure you talk to them extensively, and come back to them to talk some more. 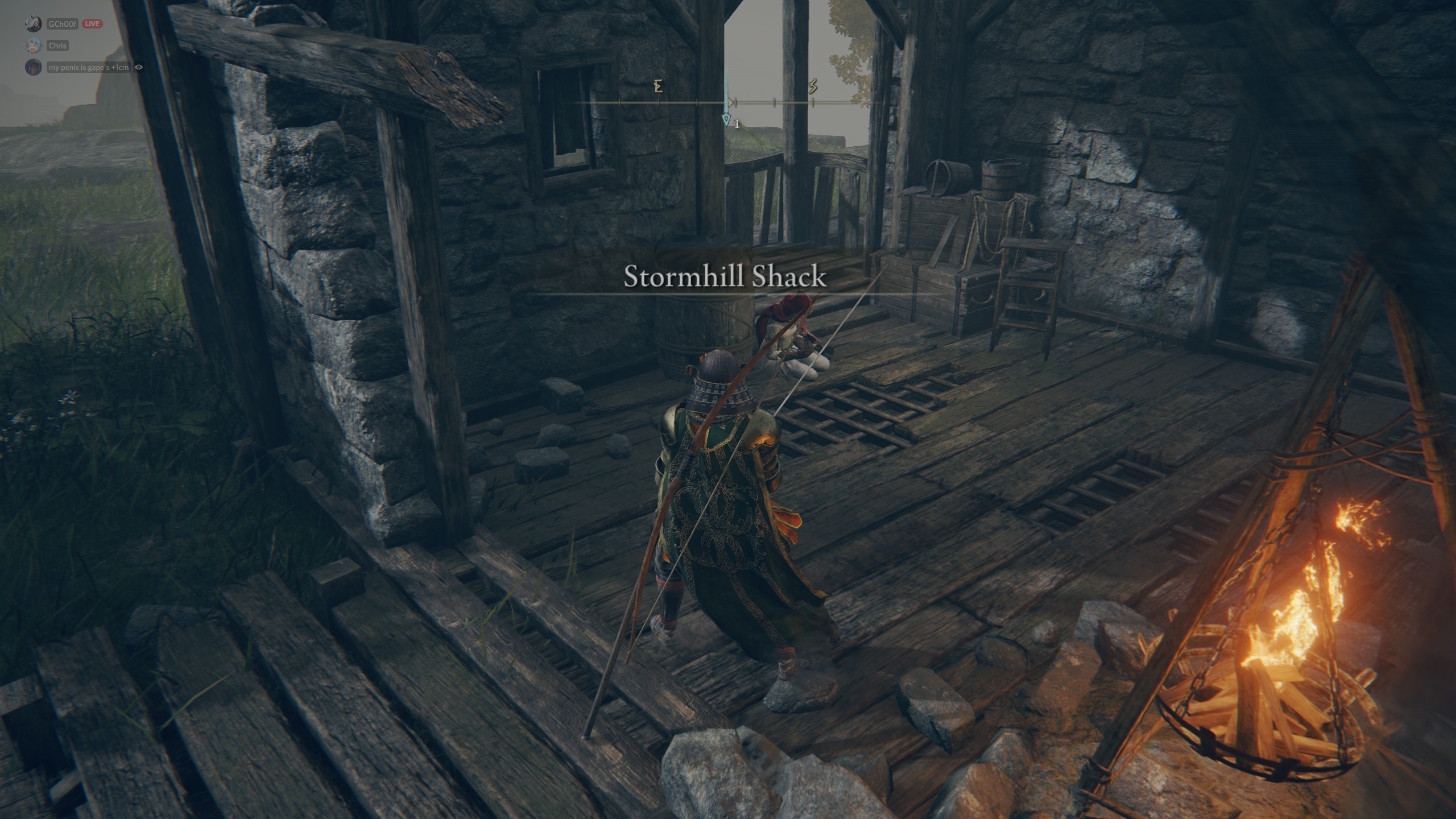 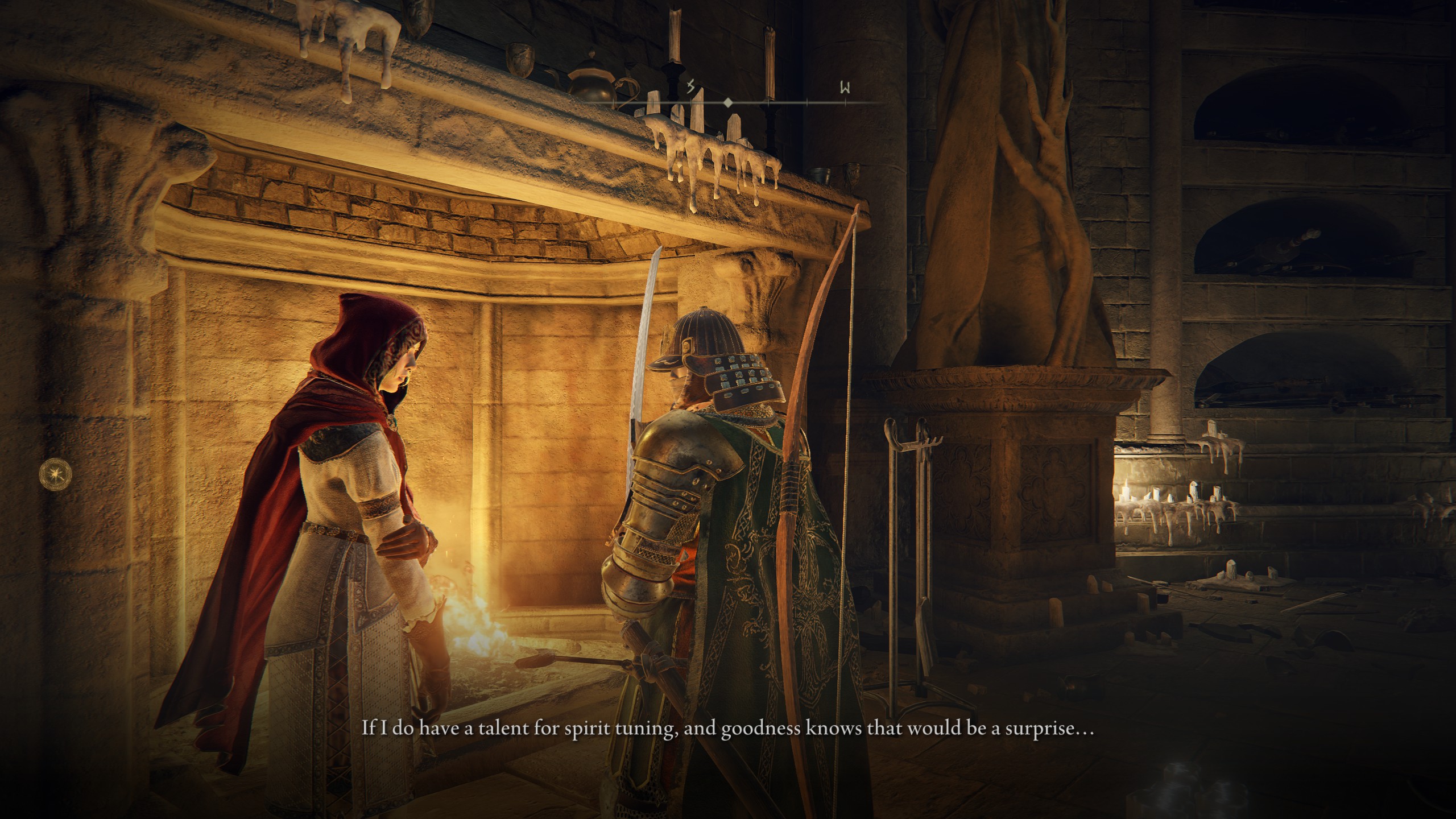 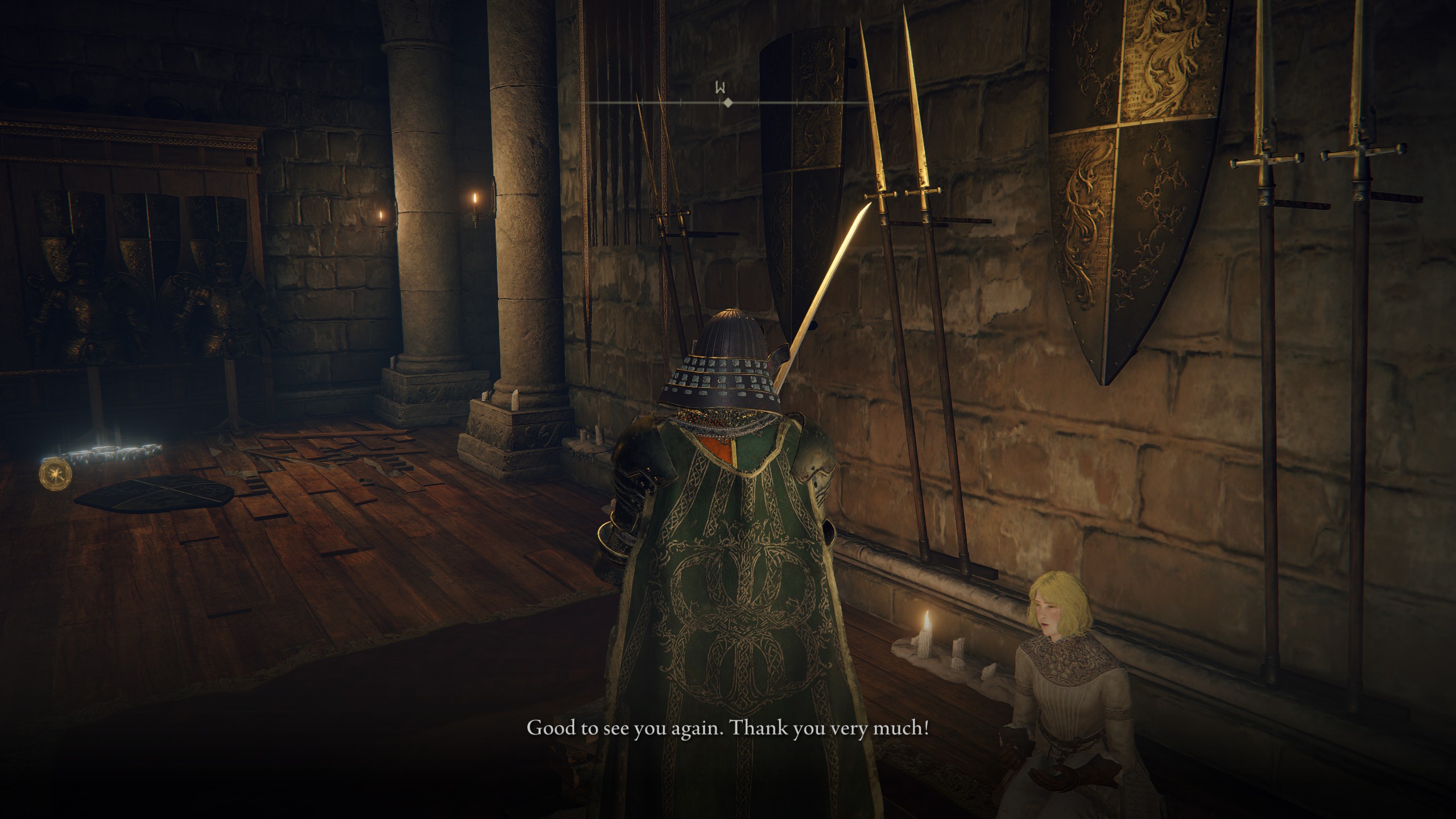 First off, very important: combat etiquette! Make sure you bow to your enemy or friendly phantom before doing anything else. This is absolutely critical. Use emotes on the right part of your menu screen.

Secondly, we mentioned getting help from friendly phantoms when you can’t win a boss fight on you own. Make sure you offer the same kind of help to other players once you killed the boss – others need help too! Use Tarnished’s Furled Finger to leave a little summon sign on the ground. 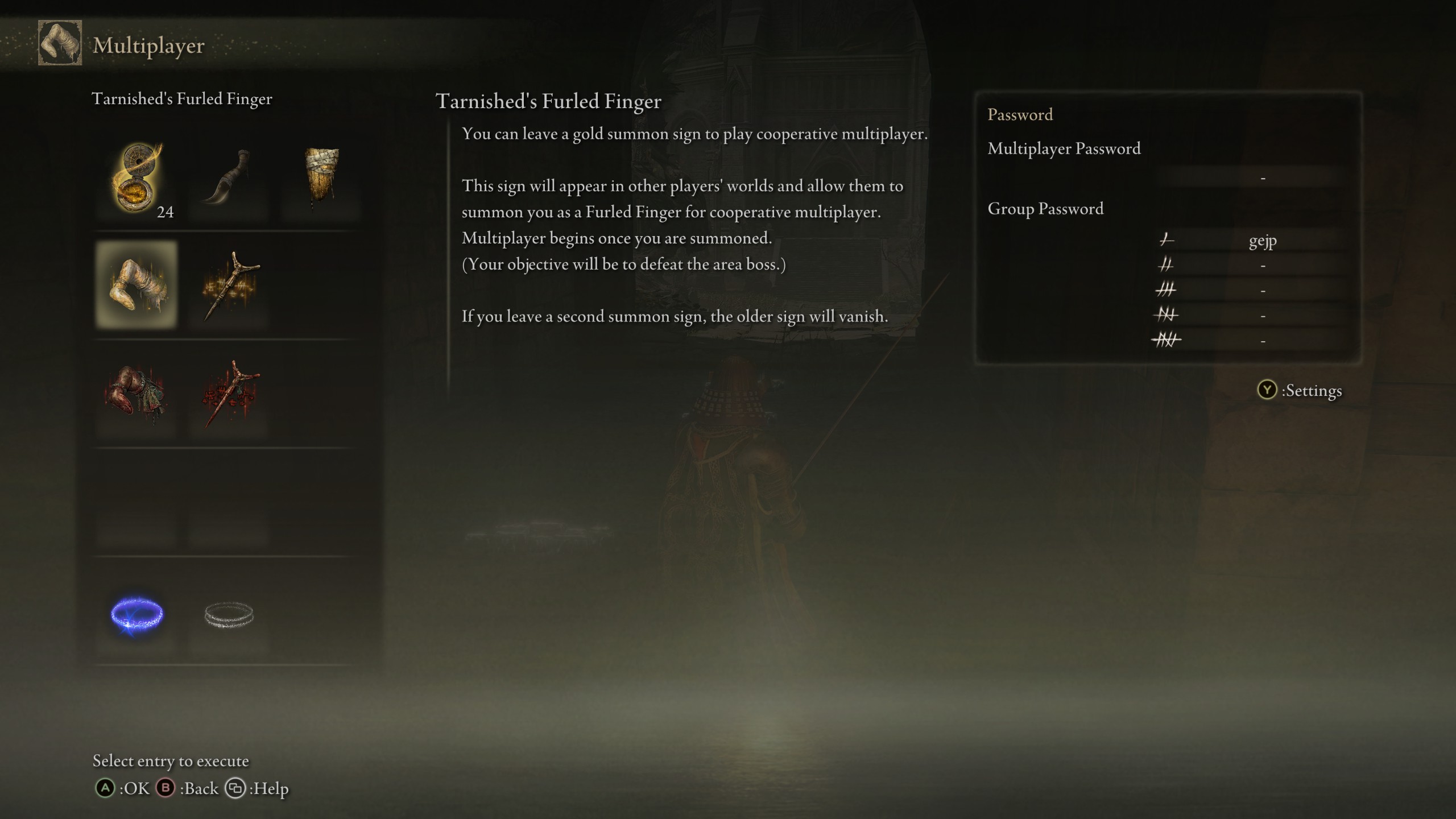 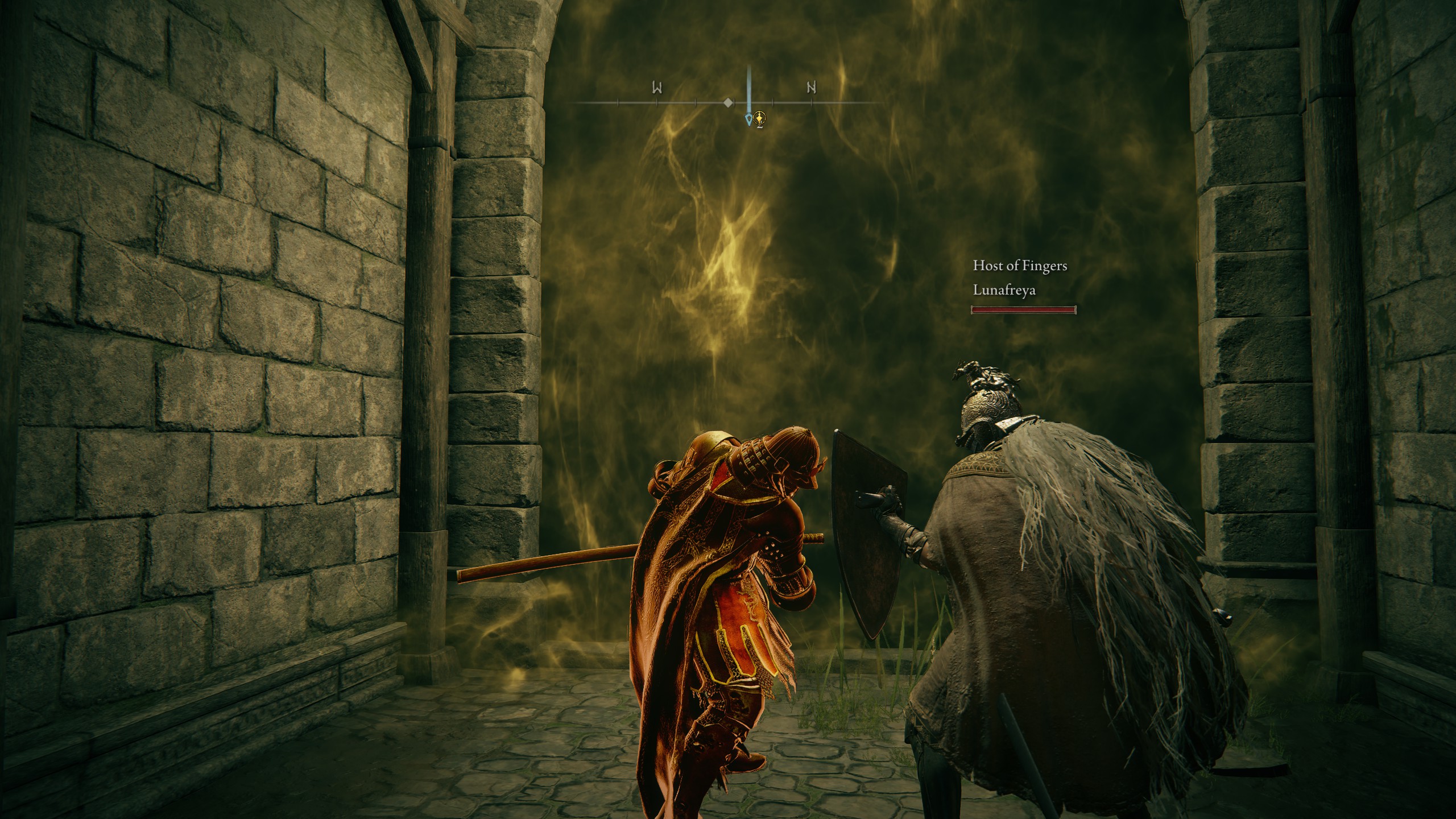 Another way to help fellow players is to leave a message behind. Write a message when you want other players to know there’s an ambush ahead, or maybe a friendly NPC that is otherwise hard to find. When other players praise your messages, you get a nice little HP recovery, much like the one you get from drinking your flasks. 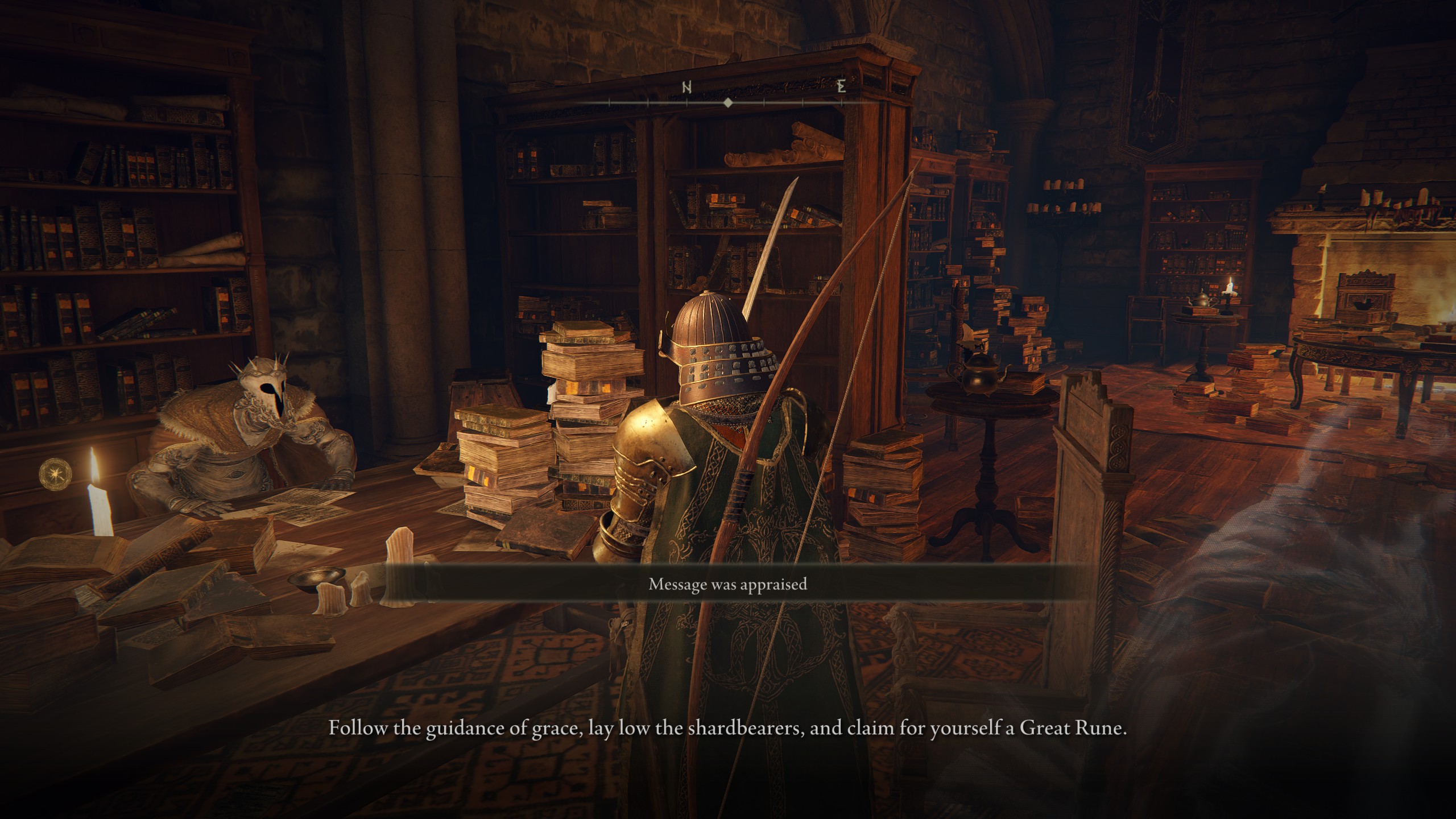 This is all for ELDEN RING How to Play Elden Ring for Total Souls hope you enjoy the post. If you believe we forget or we should update the post please let us know via comment, we will try our best to fix how fast is possible! Have a great day!