A difficult and infuriating boss, I hope this guide makes your life a little easier.

The Putrid Tree Spirit boss took me so many tries that I decided to write a guide. He will seem unpredictable and borderline unfair, but his moves are pretty easy to read. Nonetheless, it’s a terrible boss due to his scarlet rot attacks. There is a weaker Tree Spirit at the bottom of Stormveil Castle with a similar move set, there may be more.


I’m assuming a melee build for your character here.

War-dead catacombs, in the north east corner of the area where you defeat Starscourge Radahn, in Caelid.


Run all the way through the catacombs, dodge all the battling spirits, jump out at the last window before the dead end to find the switch that opens the boss door.

Stay near his chest.


Between the front paws you will see the Tree Spirit’s fat, bright red belly. That’s where you will want to be standing next to.


This will 100% make your life easier. His attacks will miss you more often. I prefer staying a little bit to his left side (right from your perspective) as this makes it easier to read his next move. The spirit will move around frantically, but just keep running towards him and roll while keeping your shield up all the time.


Read the attack and hit him 2-3 times afterwards.


It will take a lot of tries to learn his attack pattern. It’s safest if you hit him a few times after his attack animation instead of going all in. If you get too greedy, you’ll get stomped.


If you land enough hits in a row, you will stagger the tree spirit. Going for a critical hit in his eye did not deal a lot of damage, so I prefer a good combo attack. 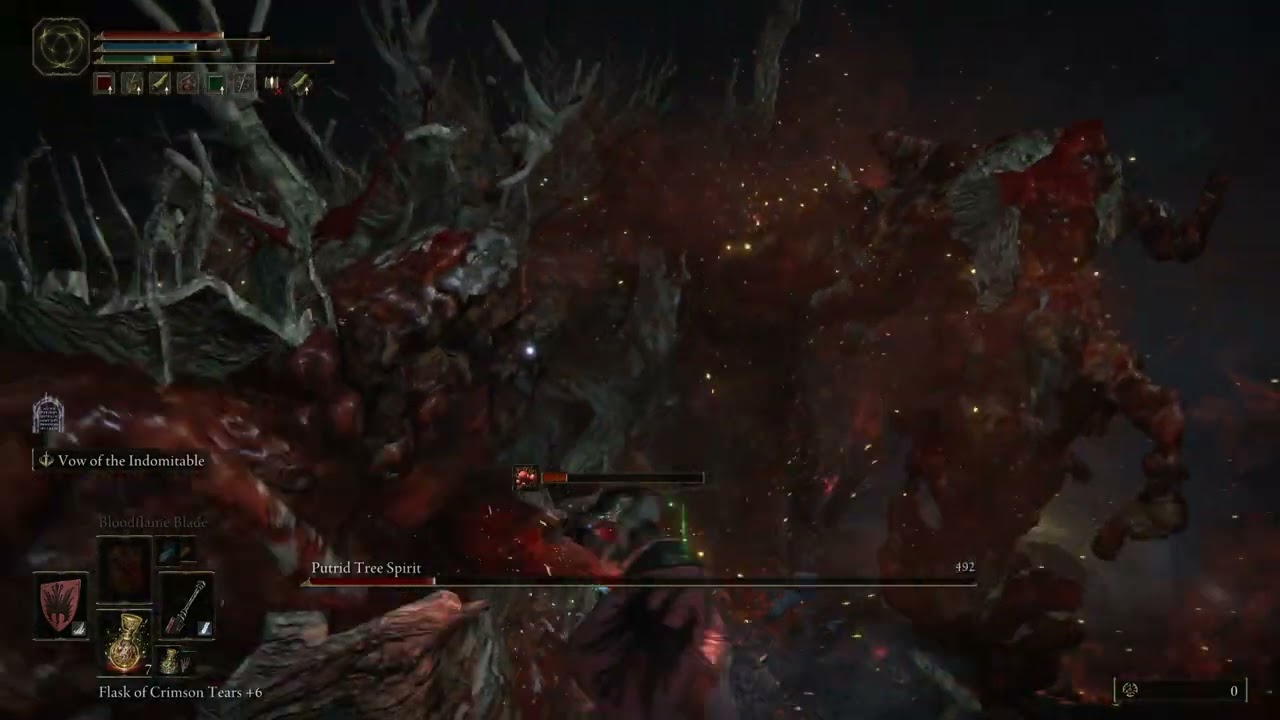 Take your time to learn his attacks and get a few hits in after his attack animation ends.

After his first rot explosion, the Spirits body will glow with rot and his attacks will deal some Scarlet Rot damage. It did not bother me all too much, so you might want to get your immunity up if you’re struggling with this.


He uses the exact same moves, but his body will glow, which can be a bit confusing. In the end, I find the attacks during this phase easier to read.

Things that seemed helpful to me:

Here we come to an end for ELDEN RING How to Defeat Putrid Tree Spirit Tips hope you enjoy it. If you think we forget something to include or we should make an update to the post let us know via comment, and we will fix it asap! Thanks and have a great day!