If you want to be/cosplay/cosbe a Second Generation Albinauric, here’s some numbers.

Much like people in Bloodborne tried to figure out the correct hair color to have your character’s hair match the Knight’s Wig – [nocookie.net] , I have tried my best to figure out how to replicate the Albinaruic skin tone, as well as other small things to note in case you want to play as one of these damn things. Which you should.

These are the values that I found to be the closest to the Albinauric skin tone:


When using Color Cop – [colorcop.net]  to check how close the values I had matched the actual Albinauric Mask, while obviously this can’t be done precisely, I noticed that on average the head had slightly higher RED values than the body.


Despite that, the skin color still turned out closer to the intended one if I increased BLUE by a little.


This is very likely because the Albinauric Mask and the player character’s skin are wrapped in two different textures with different properties, base colors and luminescence. More on that topic below.


EDIT: what I wrote here makes no sense since Color Cop is just picking raw colors right from my video input and doesn’t care about textures. Still, the point stands, but if you want you can try lighter or redder hues to see if it looks better, I dunno.

This one is pretty much mandatory.


As explained before, your character’s skin has a completely different texture than the mask; this means we have to do our best to imitate the Mask’s properties (outside of color) with the tools at our disposal.


In this case, making the skin tone as shiny as possible is a must, to mimic the smooth, lustrous skin these boys have, as it likely reflects light more than the character’s base texture.


As a side note, even though this makes it accurate, keep in mind it’s likely you won’t be looking at your dude’s body skin that much, since going around without armor that covers the ripped-out neck of the Albinauric Mask really breaks the illusion of continuity between your skin and the mask. Still!

Not to confuse with Apparent Age.


You will notice that, as lustrous as their skin is, these guys have it rough; their skin is somewhat ruined. 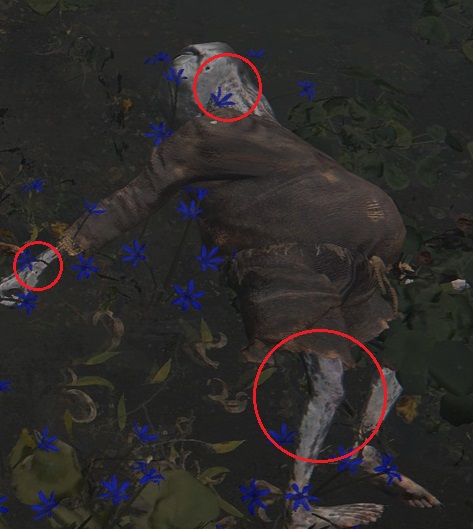 To match this, it does help a little bit to layer your character’s skin with the “Aged” filter. 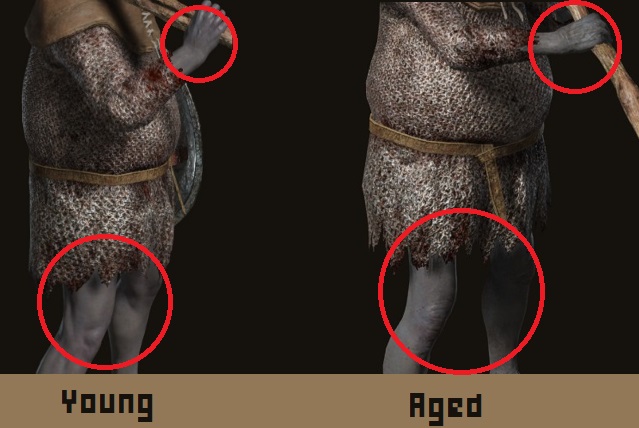 You’re free to do whatever you want, but do hear me out on these bad boys: 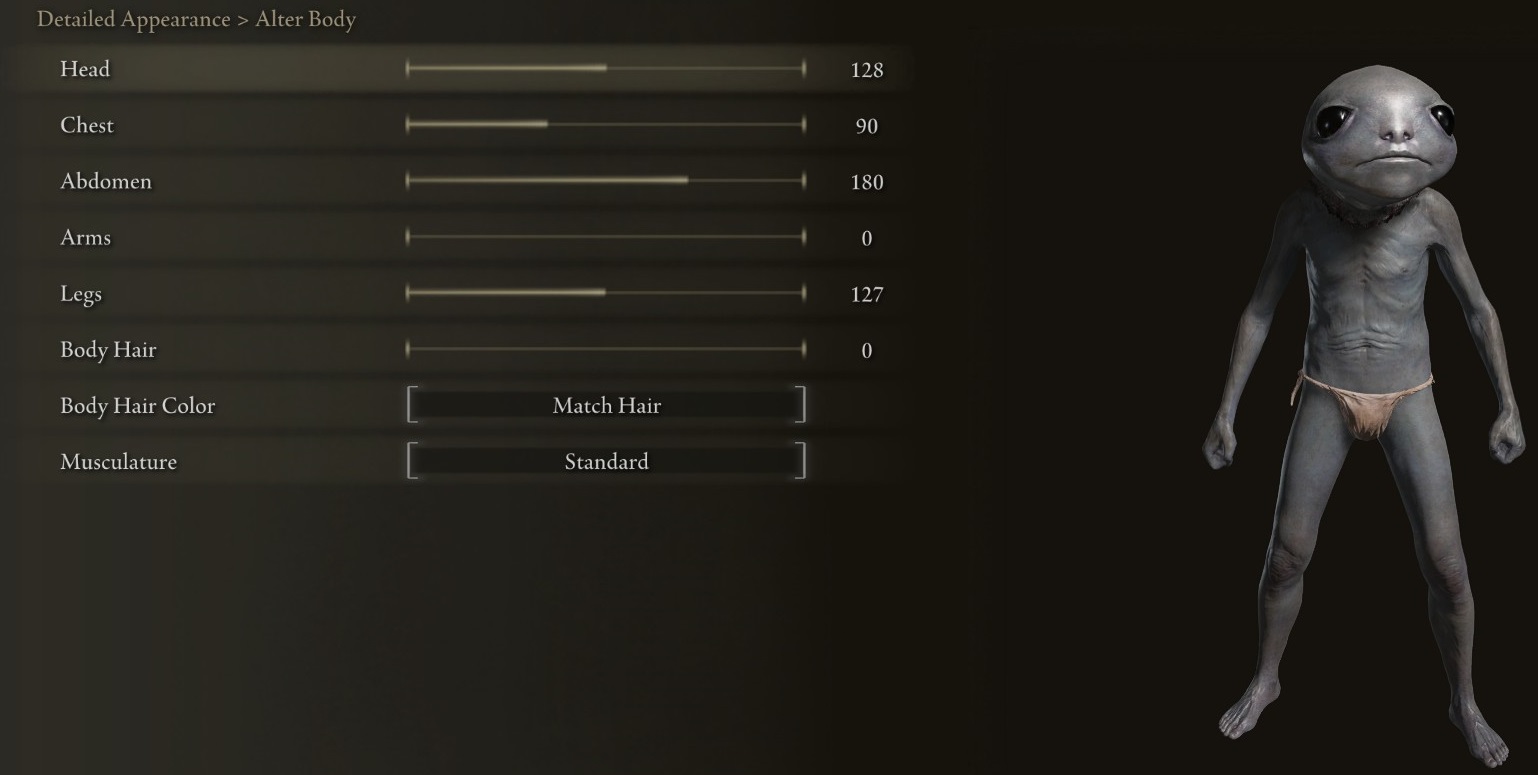 
The objective here is not to try and match the Albinaurics in size, but rather to keep some semblance of accurate proportions, while not looking completely silly (except you’re an Albinauric.), and boasting your Dirty Chainmail around the streets of the Lands Between.


In Souls games, most armor sets are designed in a way that if you want to make a decent-looking cosplay build, you will have to stick to the Standard body build (in this game, that’d be all “128”s), although definitions here are arguable.


What I’m trying to say is that equipment pieces are usually designed around the Standard build of the character first and foremost, or at least that’s the impression I always had.


I think taking a couple liberties here is in order; for example, by going the Standard build route for this, you will end up with underwhelming proportions. Here’s an incredibly lazy test that gives an incredibly rough idea.

With that in mind, we also can’t go too much beyond the Standard build with the body proportions, because Albinaurics are both chubby and have skinny legs/arms, and the character creator won’t allow you to have Arms and Legs values too low compared to Chest and Abdomen (beyond 128 Chest/Abdomen, the values of Arms/Legs will adjust themselves without your input).


Since the goal here is to look decent wearing the Albinauric stuff as well, which includes their chainmail armor, we can take a page from what artists do with their art, and work in what we can’t do realistically by relying on “impressions”.


This is just a fancy way to say that:

– Legs can be at the Standard value (I put 127 instead of 128 just because.) since the Albinauric chainmail chestpiece is larger on the abdomen, and Standard-sized legs will still give off the illusion of being skinnier when coming out of it, by comparison.

– Abdomen should be larger than the rest of the body, but should not go to higher values so that legs stay at the very least Standard-sized. 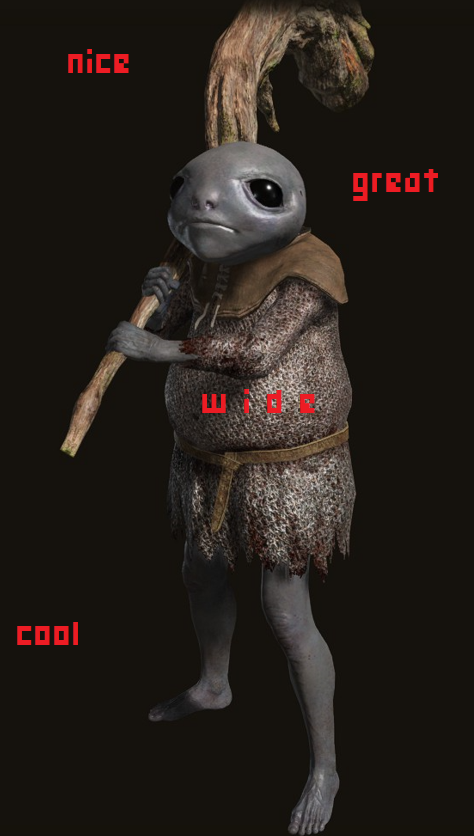 “My version is better than yours!“

Good for you! Hit me with some suggestions.


“Can I cosplay as one of those Red Albinaurics in Mohgwyn’s Palace?“


“Where do I find Albinauric equipment?“

“You keep calling these Albinaurics but that is incorrect, you are talking specifically about the Second Generation Albinauircs.“


“Is there a way for me to not miss out on defenses? The only parts of this set are the mask and the chestpiece.“

I’ve been looking into this: it seems that the best candidate for pants that won’t alter your appearence while wearing the Dirty Chainmail has been cut from the game (yes, it’s the panties).


The next best candidate seems to be the Prophet’s Trousers, if you don’t mind having broken cuffs on your ankle, but the trousers themselves still pop out of the Dirty Chainmail sadly.


As for gauntlets, I’m not sure yet; there are definitely some bracelets that go under the Dirty Chainmail’s sleeves, (such as bandage-like equipment, or the Godskin Noble Bracelets) but there’s nothing really “invisibile”.


You can improvise and be original here, maybe make a fungus-infested Albinauric, or a civilized one with the rest of the (regular) chainmail set.


One thing to remember is that, unlike Dark Souls 3, you get no straight-up malus for not wearing armor pieces in Elden Ring, so at least there’s that.


“What’s the most accurate version of this that I can make based on the enemies themelsves?“

Technically, since only the Dirty Chainmail is available, the absolutely closest thing to real Albinaurics you can do is:

This is because the versions of the Albinaurics that use the wooden clubsdo not wear the Chainmail, and vice-versa.


There is one interesting thing to note if you want to be niche: there is another weapon that some Albinaurics use; this is the only weapon used both by Chainmail and Non-Chainmail Albinaurics. 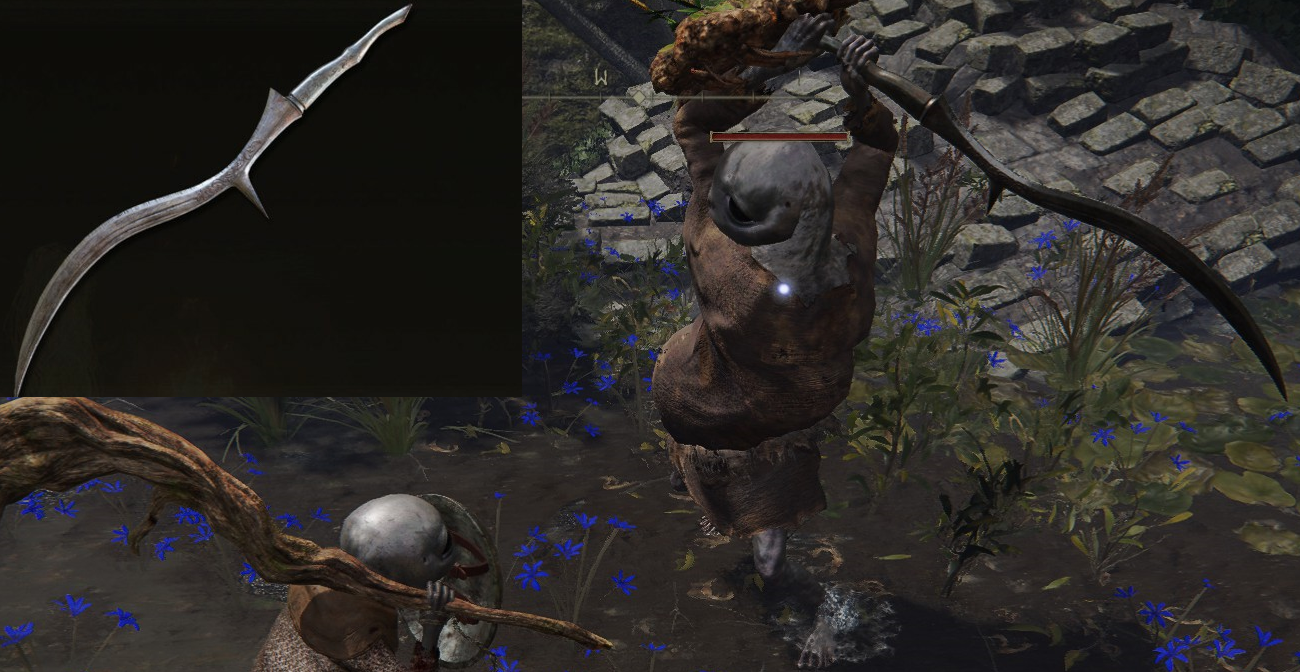 This weapon is also wielded by Millicent but apparently she uses a unique moveset when doing so that the player has no access to. The plot thickens.

This is all for ELDEN RING Albinauric Skin Tone & Notes + Color Values hope you enjoy the post. If you believe we forget or we should update the post please let us know via comment, we will try our best to fix how fast is possible! Have a great day!