In this guide, you will learn many facts and strategies about fire in duck game that will give you an edge in combat.

This is a complete guide on how fire functions inside of duck game. This guide will include many techs and bits of information that will give you an edge against your opponents when it comes to fire. It was written by me, but a lot of the information added can also be credited to [QC]Stalin#6969 and Dirty Dan#4444.

Fire-Player interaction
You don’t burn immediately when coming into contact with fire, you burn depending on the time spent in the fire and the frequency of the fire you’re going in, this means that the less fire you go through the less you’ll burn, but that doesn’t mean you should avoid all fire, just don’t get over-confident while stepping in it, and it also means you should go through fire as fast as possible, so never stop or turn back.
This also means that fire mid air is safer to go through due to its speed increasing by gravity.

If you slide on fire particles on the floor, they will get extinguished.
If there’s too much fire and you slide on it, you may extinguish some of the fire but not all, (approximately begins from 3+ fire particles), you also have higher chances of not burning if you slide through fire rather than just walk through it.

Ice block uses
If you are holding ice, you are immune to burning. Although, The ice will begin to melt and eventually it will disappear and your immunity to fire will go away. This also applies if the ice is in your holster.
If you are already on fire and you hold ice, you will not get extinguished, you have to melt the ice with the fire that is on you, and touch the water outputted from the ice block. this means you have to touch a solid floor for this to happen, otherwise the water will drip and go through you and you will not get extinguished.
The hitbox of slightly-melted/ heavily-melted ice will also shrink from the original hitbox of the ice (ice block > slightly melted ice block > moderately melted ice block > heavily melted ice block > nothing).

Fire-World interaction
Fire particles may have collision with the floor, but only the surface. If you manage to shoot the fire within the block, It will not collide with the inner walls of the block and maintain its velocity while going through, you could use this in a couple maps to attack your enemies in areas where you are safe, but your opponents aren’t due to your fire-shooting weapon. 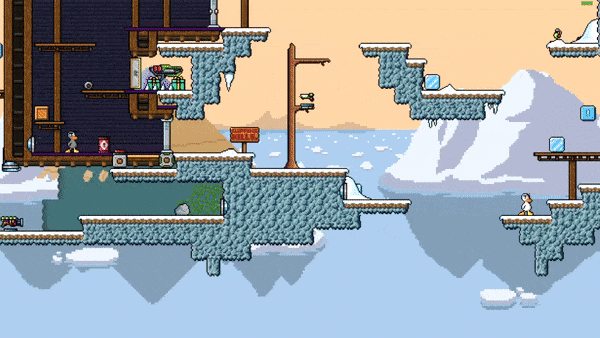 Present-Fire interaction
when a present is lit on fire and it overheats, the present will be opened.

When a gun is dropped in lava or fire, they will overheat, in that state they will begin to shoot on their own, this may be used for smart and strategic kills, but fire weapons don’t overheat, instead when they reach that state, they will explode in a burst of fire.

The Grenade Cannon
The grenade cannon can shoot fire if you don’t release the grenade in time, this can be used advantageously to cover an area with fire and keep a distance from your enemies. Due to this mechanic not requiring an input to release the fire, This means that you can load a grenade and leave/throw your weapon and it will still shoot the fire. This can be used to shoot in unreachable spots, or shoot in areas too dangerous to traverse.
Using the angling ability of the grenade cannon (similar to the grenade launcher) you can also angle with the fire if you time it right (2 seconds until the fire will burst) .
(file is too heavy so here’s an imgur link 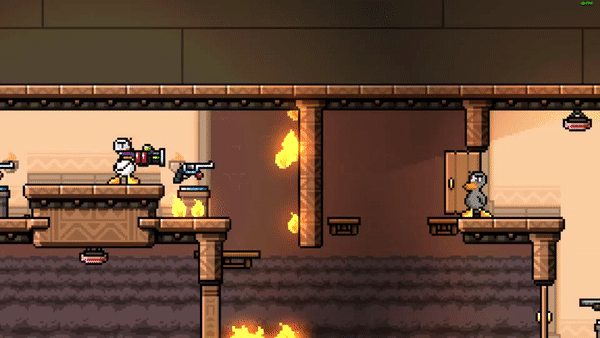 )
The Roman Candle
The roman candle doesn’t need to be dropped once ignited, you can just hold it and it will be shooting in a random degree in front of you, this will make you in a safe distance from the fire.

The Flamethrower
The flamethrower will explode if it overheats from the fire it is shooting, this effect can be replicated if there is just a lot of fire on the flamethrower that would cause other guns to just shoot.

The Match Box
Match boxes can shoot 1-2 fire particles when used. If you shoot them too fast the matchbox will explode and set you on fire.

The Fire Extinguisher
The “puff” of Fire extinguishers gives the player an effect similar to burning but you drip puff particles, this effect also grants you immunity to fire. This puff will also stay on the ground for extended lengths of time. This means that you can have a temporary “hub” when you get set on fire, simply go to the cloud and you will become immune to fire temporarily (1 second approximately). 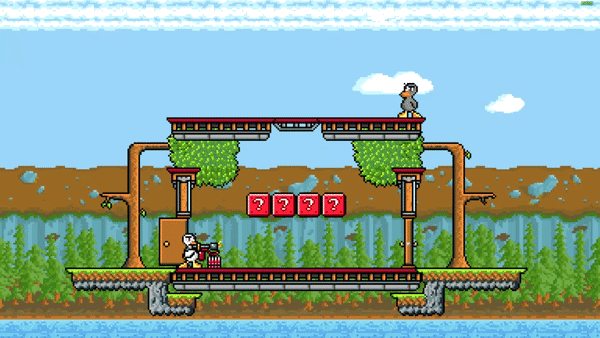 The Energy Scimitar
If an energy scimitar falls in fire or a pit of lava, the blade will turn red permanently until the game ends. This change is purely cosmetic

The Dart Gun / Chain Dart Gun
If a fire particle falls on either of the tip of those weapons, their bullets will be burned when shot. This means that these weapons will effectively become long range fire shooting abominations. This is very useful in maps were fire and dart weapons are available, to make sure your targets are dead.
But that only happens when the tip is on fire temporarily, if the whole weapon is thrown into fire and especially lava, The tip of the weapon will be entirely melted. This will make the weapon absolutely useless.

The chain dart gun can also overheat if you shoot with it for too long, this will cause the darts shot to be set on fire upon being shot. This can be used advantageously in order to set your enemies on fire.

This is all for Duck Game Everything you need to know about fire hope you enjoy the post. If you believe we forget or we should update the post please let us know via comment, we will try our best to fix how fast is possible! Have a great day!