This is a general mechanics guide for the indie- RPG Dread Delusion.

Dread Delusion is in Early Access, so this guide will be subject to edits and changes throughout it’s journey as an Early Access title. If you come across any bug-related issues during your stay at the Oneiric Isles, don’t hesitate to let us know via either the Steam Discussion Forums or the DreadXP Discord (with the channel #dread-delusion-feedback). Discord Link: https://discord.gg/M9RvpAeH5s – [discord.gg]

When you create a new character, you’ll be given an opportunity to choose your character’s origins, which will include their starting stats. 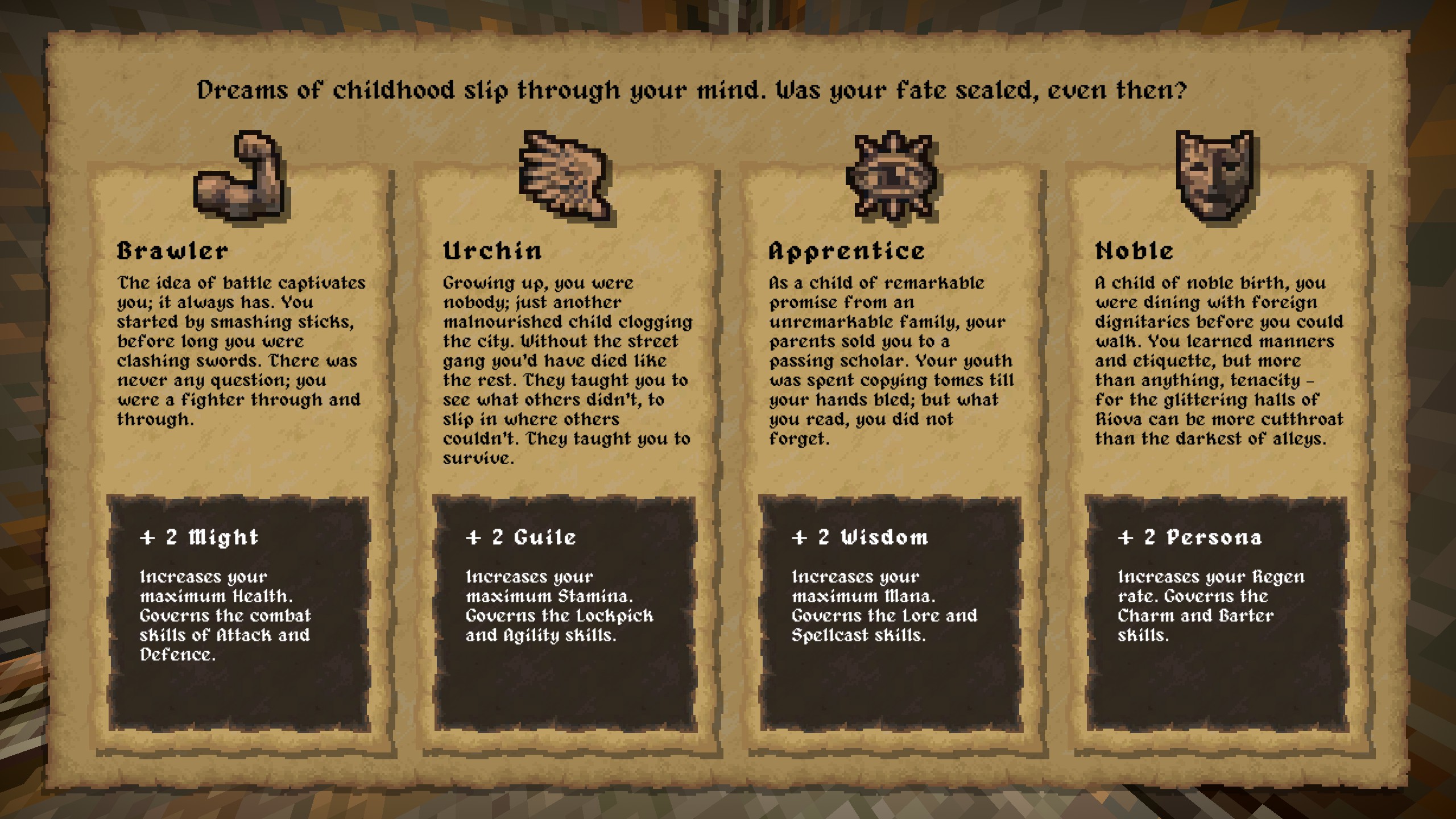 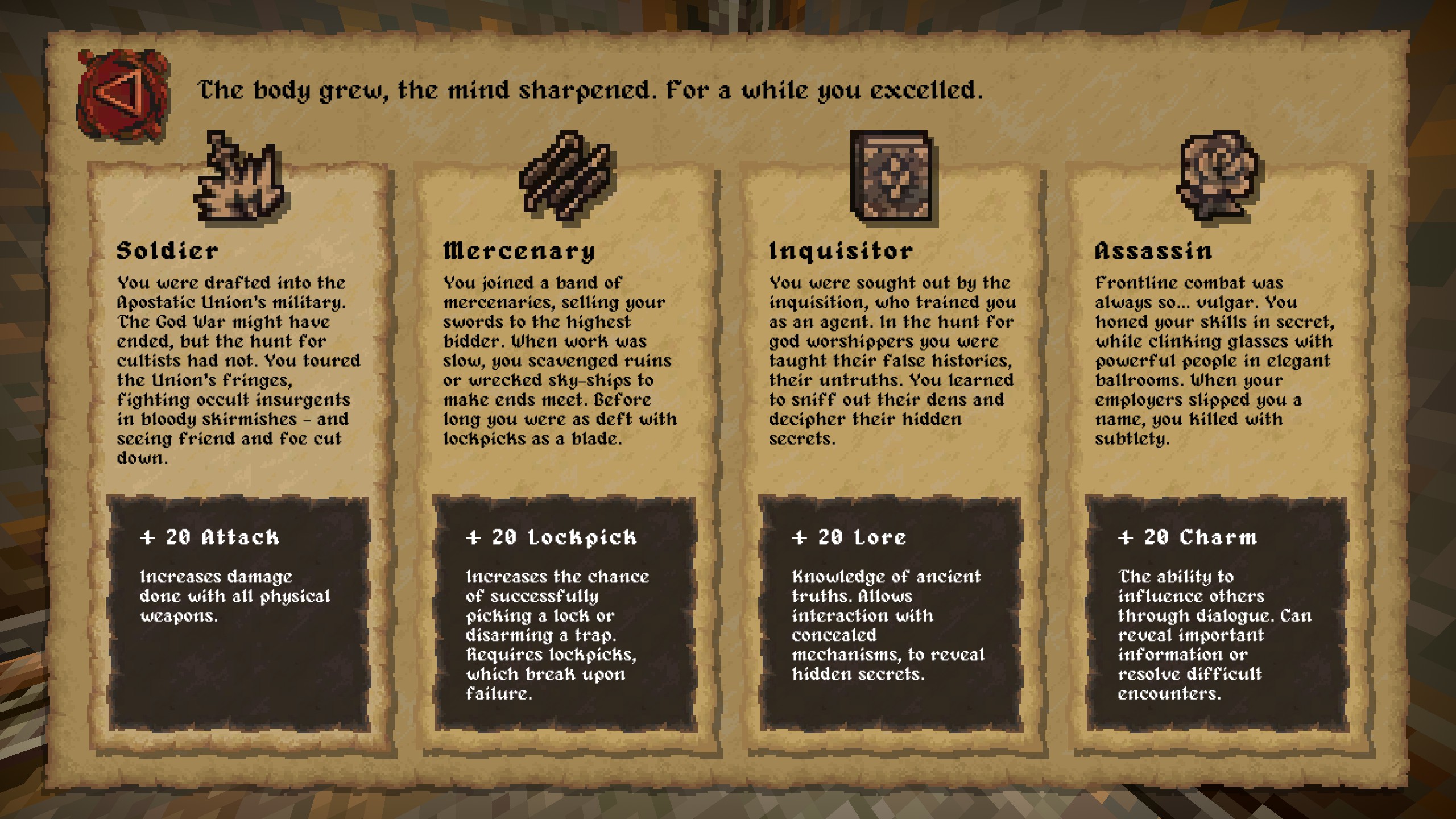 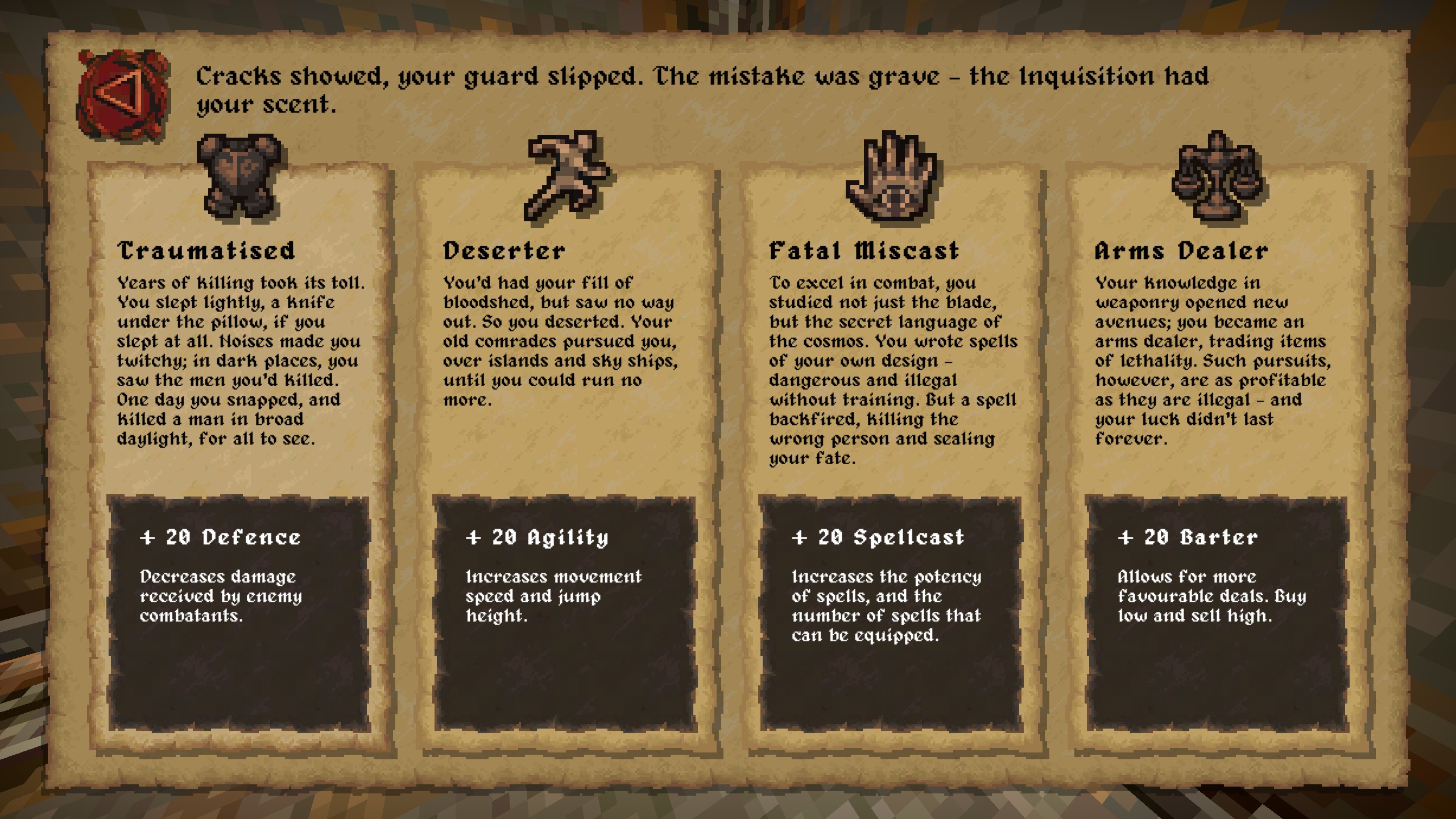 
You can instantly teleport back to the last Crstal Point you vistied by using the Home Spell. 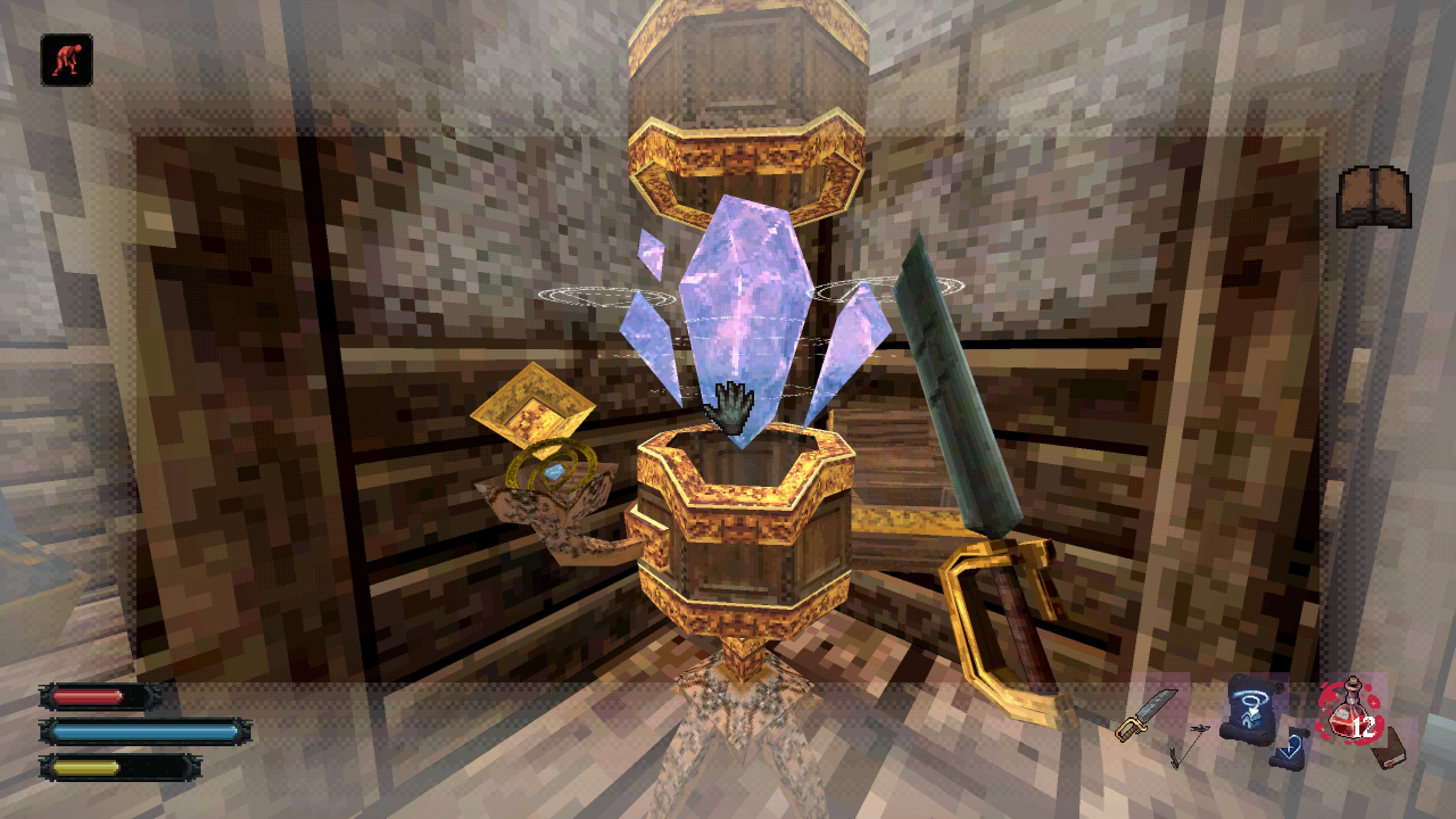 In Dread Delusion, your character has stamina for actions liking swinging a sword, sprinting, and even lockpicking. But doing any of these actions will deplete your stamina threshold, lowering the cap at which it can regenerate. When it reaches50%, it’ll stop going down, but your character will become ‘Fatigued’, reducing your attributes by 1.


Resting at Inns and using Stamina Potions will alleviate you of this debuff! 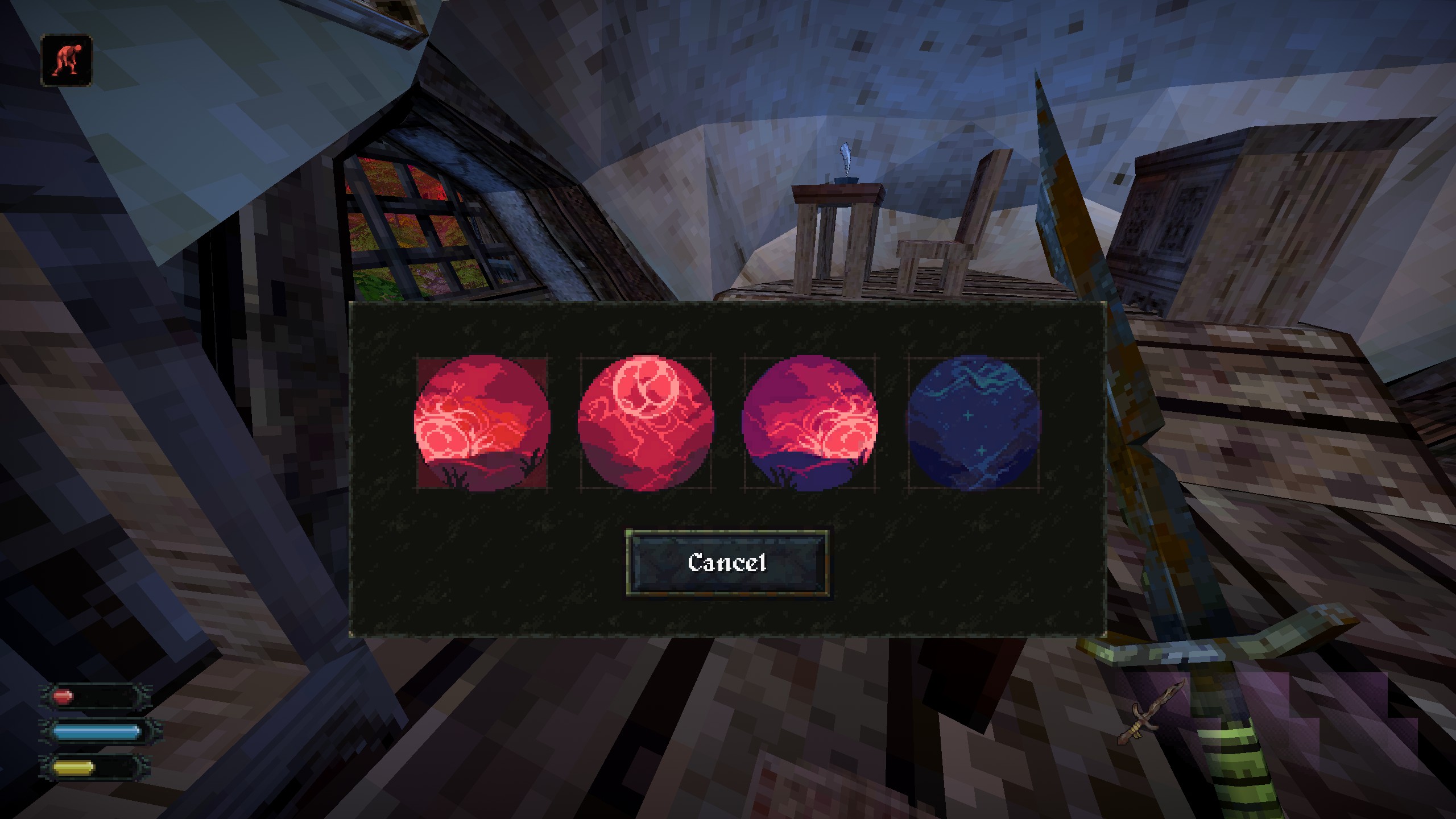 Leveling in Dread Delusion is done via the collection of Delusions, mystic skulls that you’ll collect around the world. You’ll find them around the world through exploration and completing certain quests, and those delusions will go towards leveling your stats. 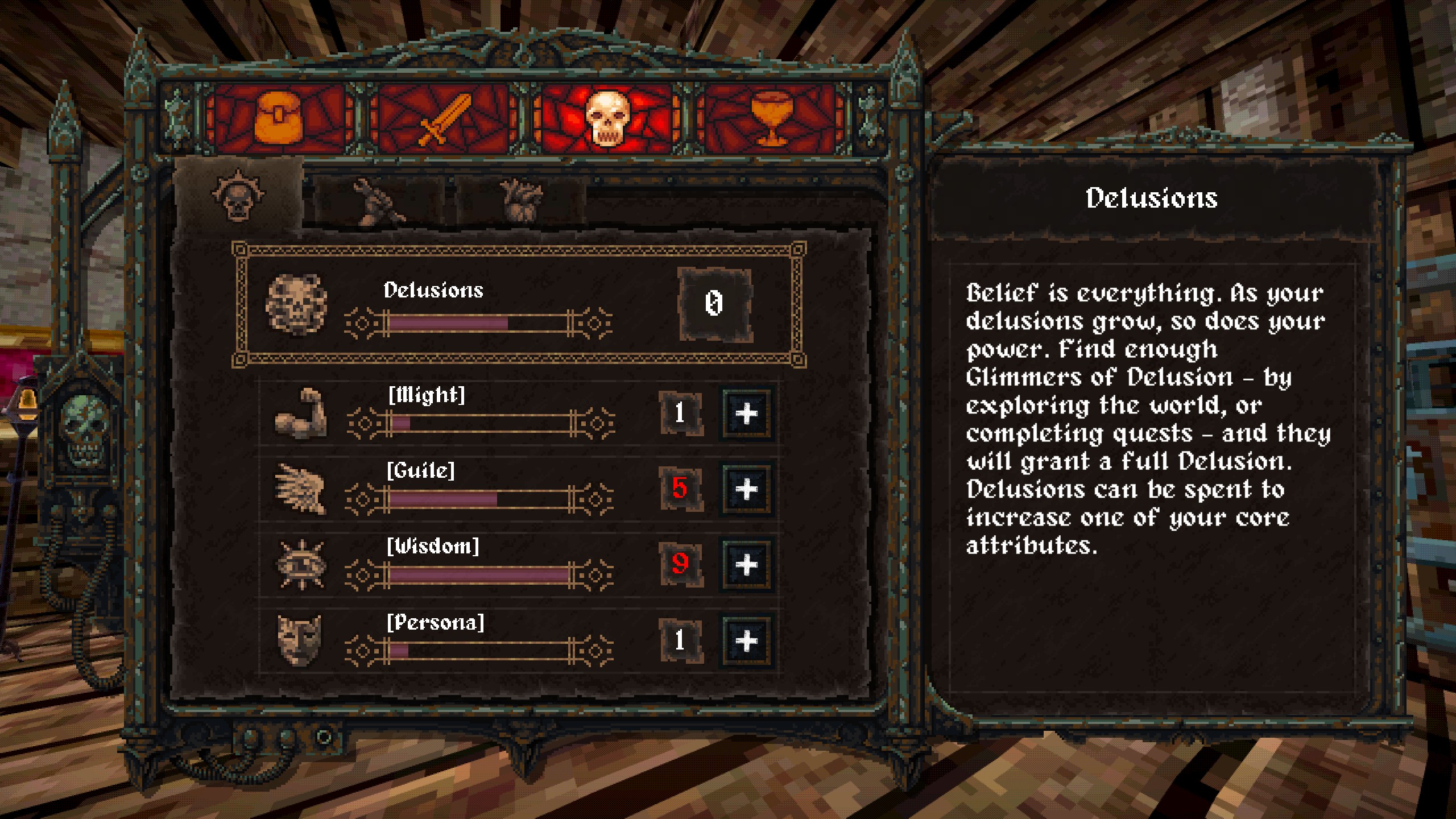 There are four major stats to level in Dread Delusion:

Leveling these major stats will raise certain sub-skills, increasing your effectiveness not only in combat, but exploration as well!

You can access your equipment page by pressing (TAB / X by default on keyboard and controller, respectively) and navigating to the second major tab (adorned with a sword). From there, you’ll be able to equip not only armor, weapons and accessories, but spells and quick-use items as well! 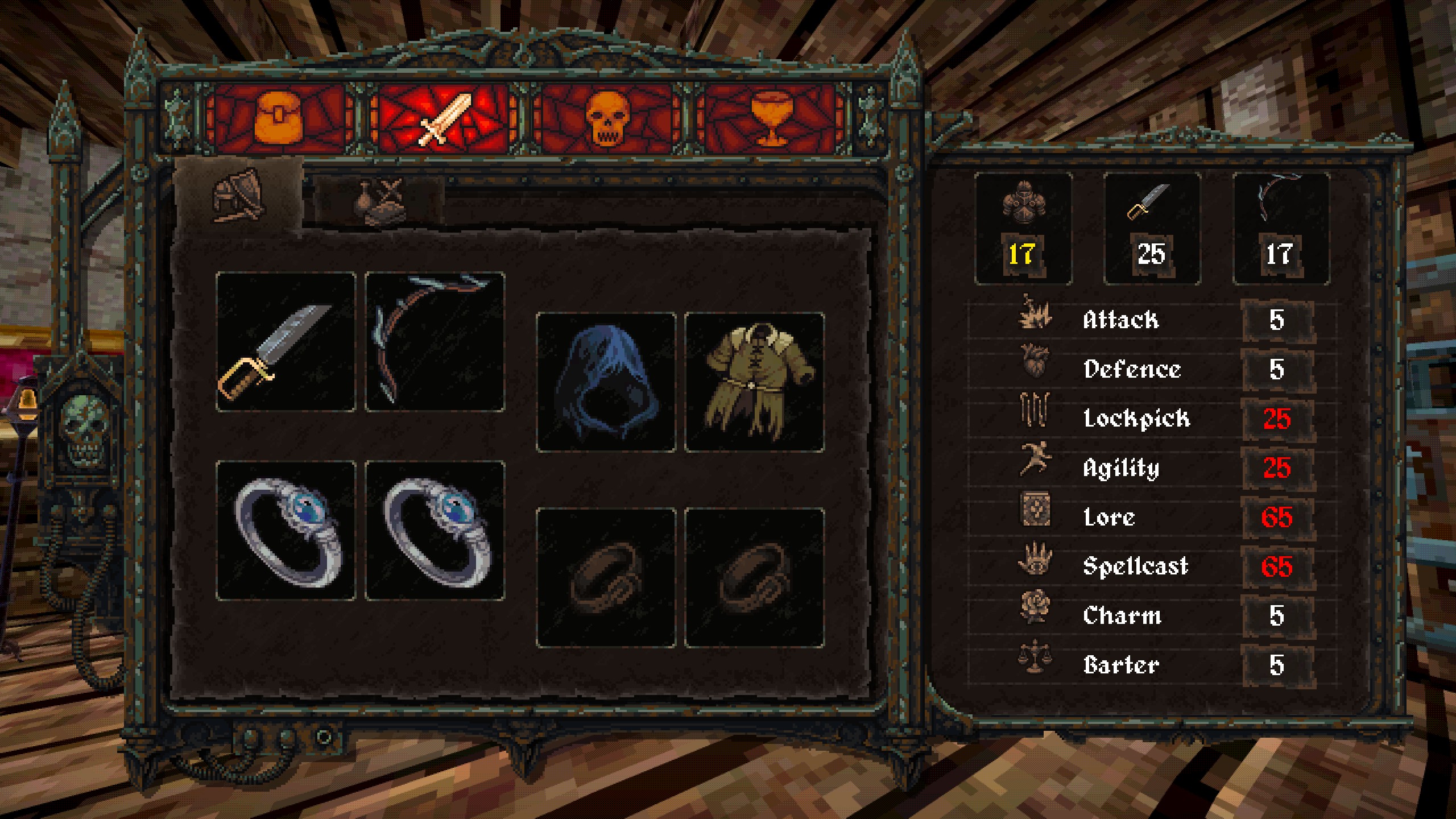 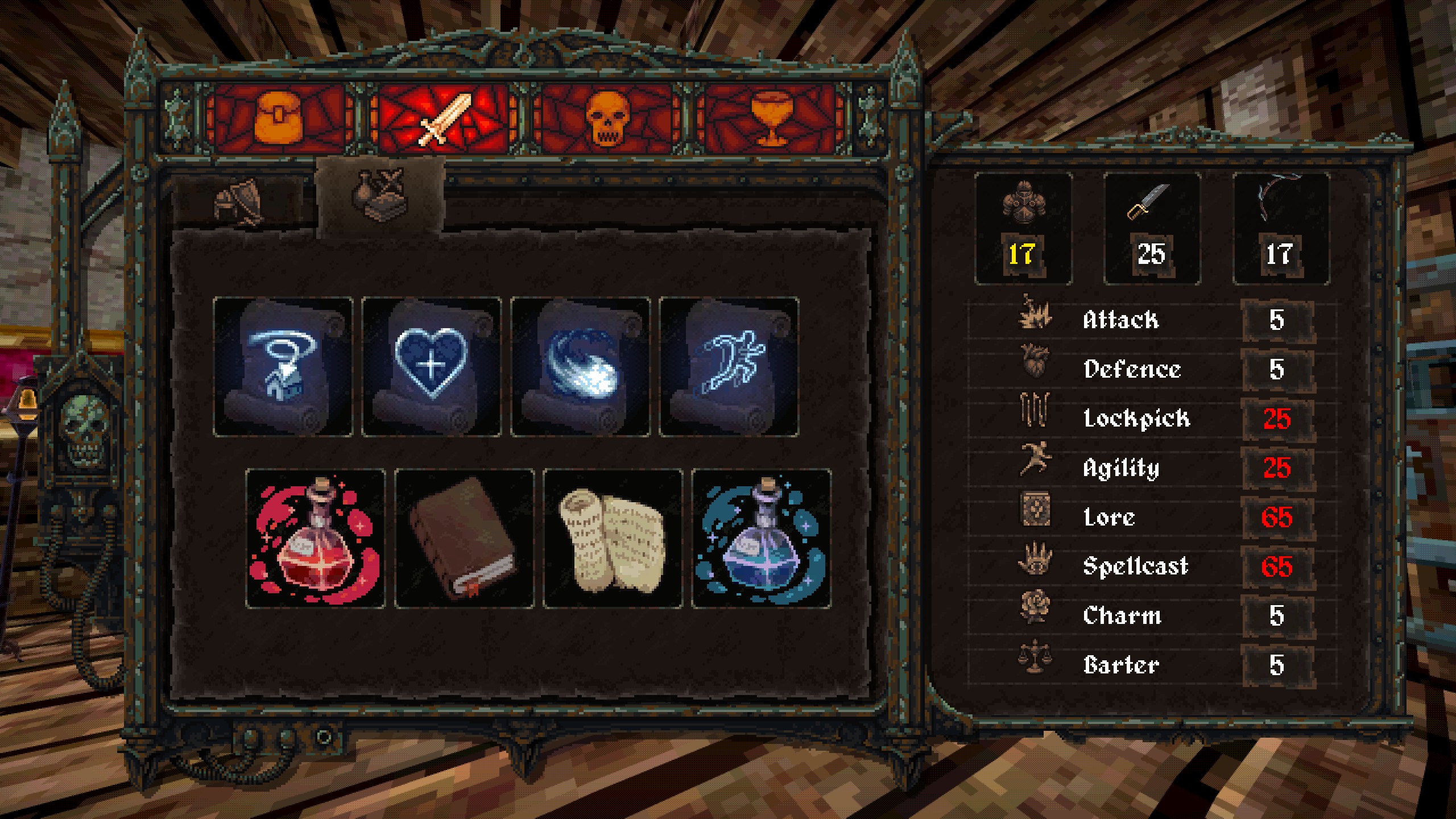 With weapons, spells, and quick-use items, you’ll be able to toggle through the ones you have equipped. (Q/D-Pad Down for Weapons, Z/D-Pad Right for Items, and CTRL/D-Pad Left for Spells by default)

During your adventures, you may come across doors that are locked, people that require a silver-tongue to convince, or particular objects in an environment barring your entry. These issues will require a certain set of ‘Active Skills‘ to progress. Active-Skills are abilities allow you to solve problems, unlock paths, and progress without the use of combat!


With a lockpick in hand, you can attempt to unlock the door! Your Guile major stat governs this particular active skill, so be sure to increase it if you want an easier time breaking into places (in-game, of course!). You can keep track of how many lockpicks you currently possess in the inventory menu) 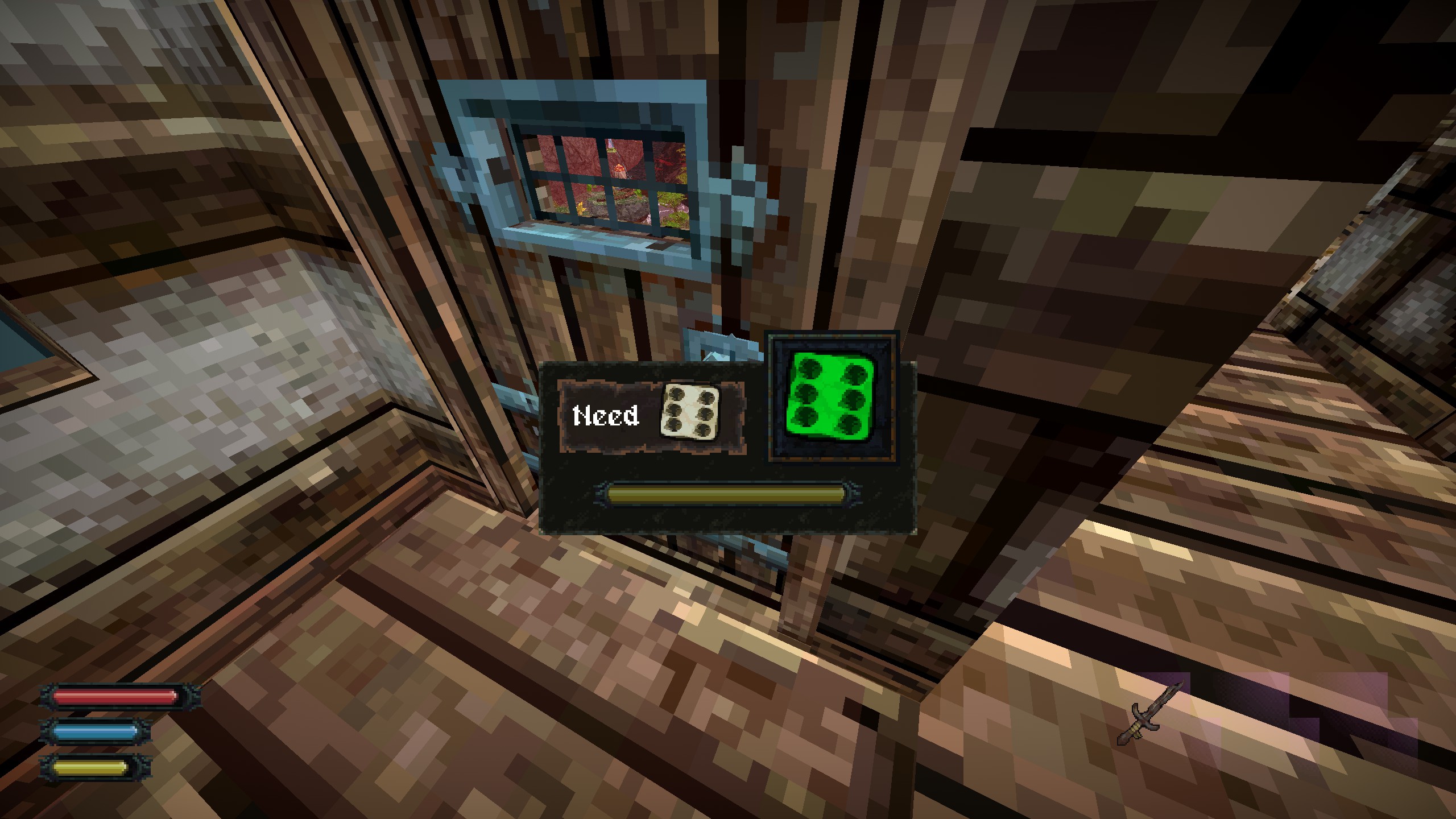 You may also find someone who might need some convincing to get on your side, which will be denoted with a dialogue choice that has ‘Charm’ prefacing the text. Your Persona major stat governs this particular active skill. 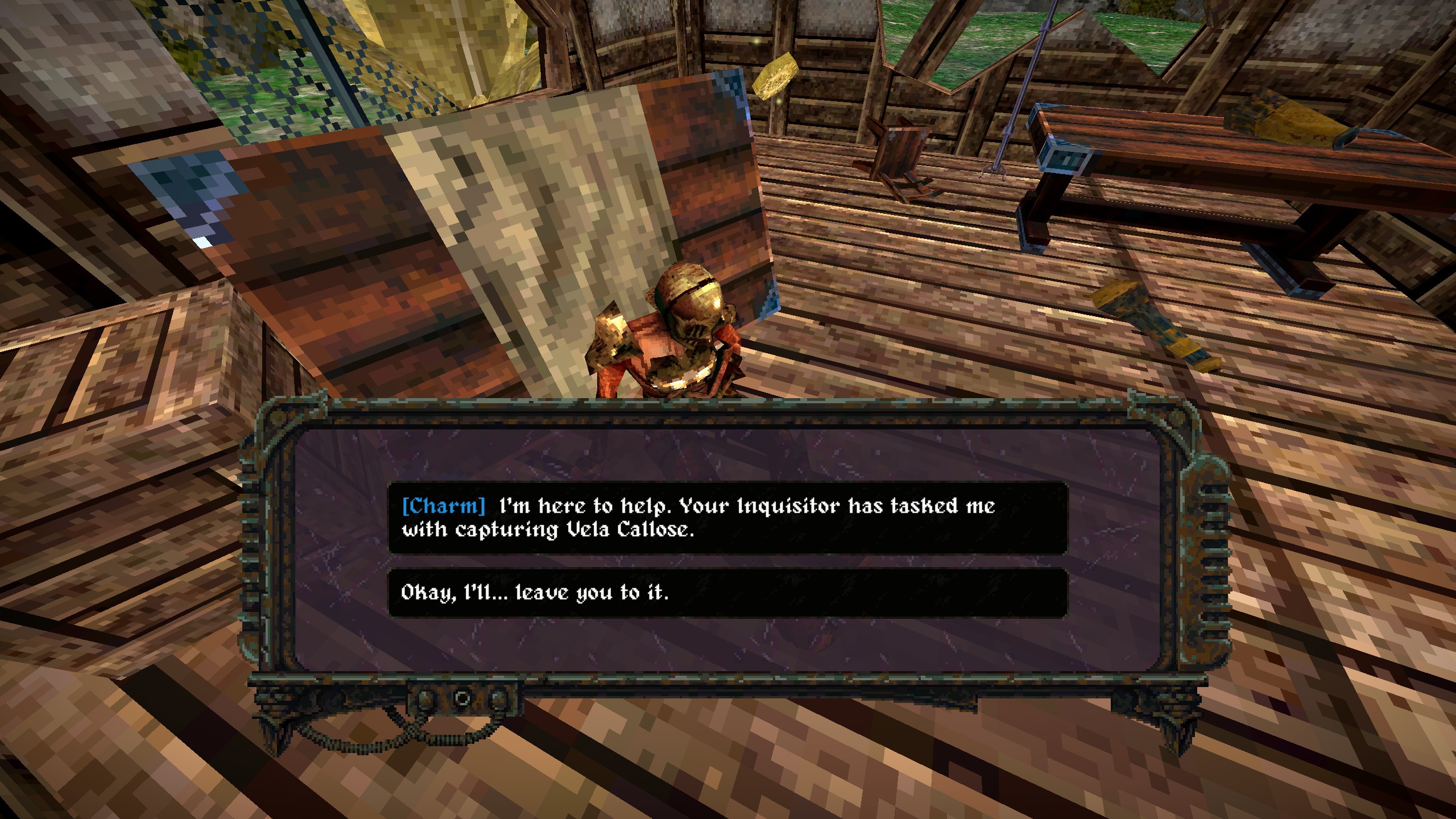 In certain environments, there may be particular objects like candles or skulls, that may be interactable! Interacting with these objects may yield a new path to take and treasures to loot! Your Wisdom major stat governs this particular active skill. 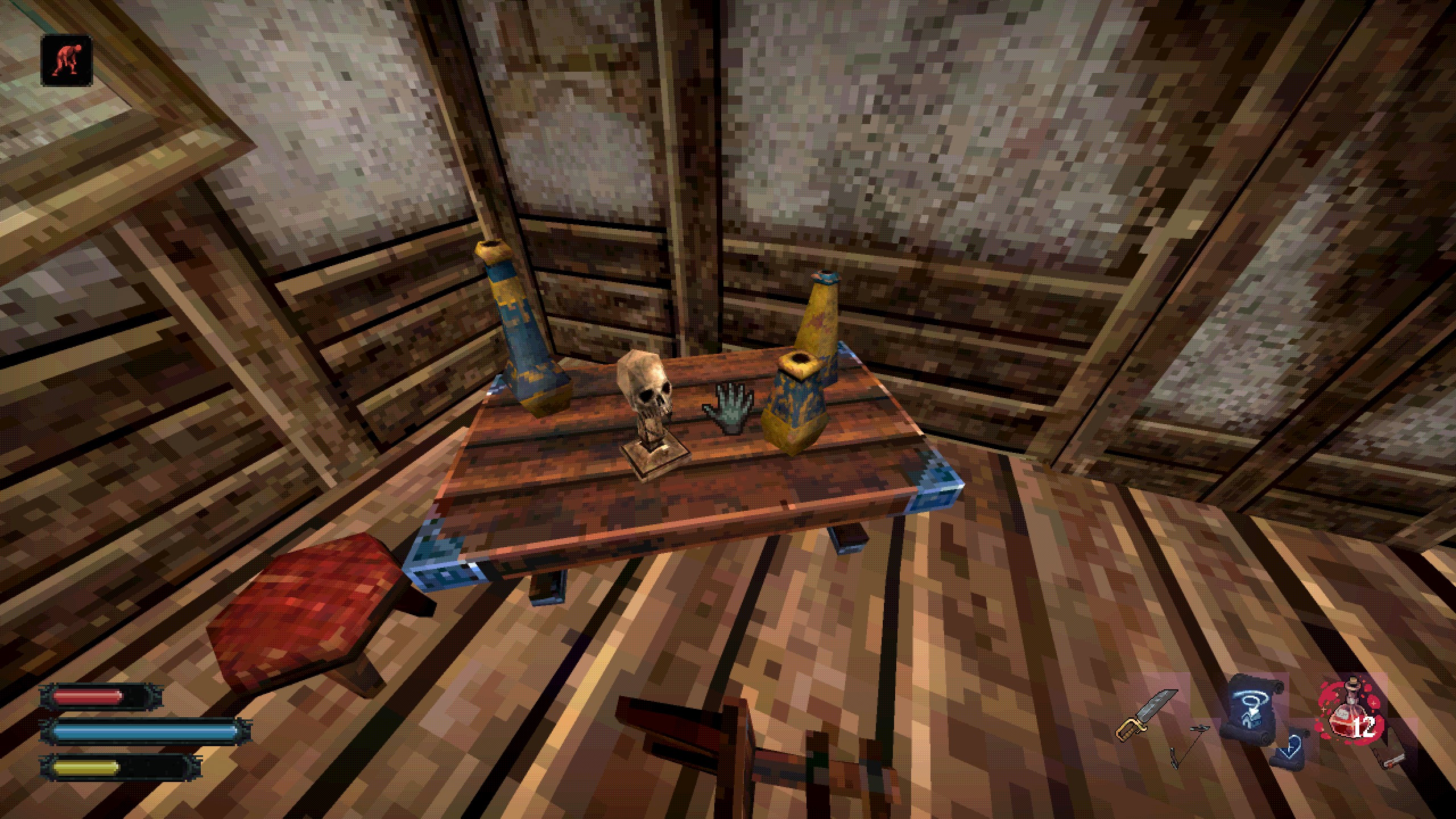 In the world of the Oneiric Isles, you’ll come across many plants, rock outcrops, and other materials that you’ll find a use for during your journey. These materials, when picked up, will need some time before they respawn, so definitely check back in with them after a period of time has passed. 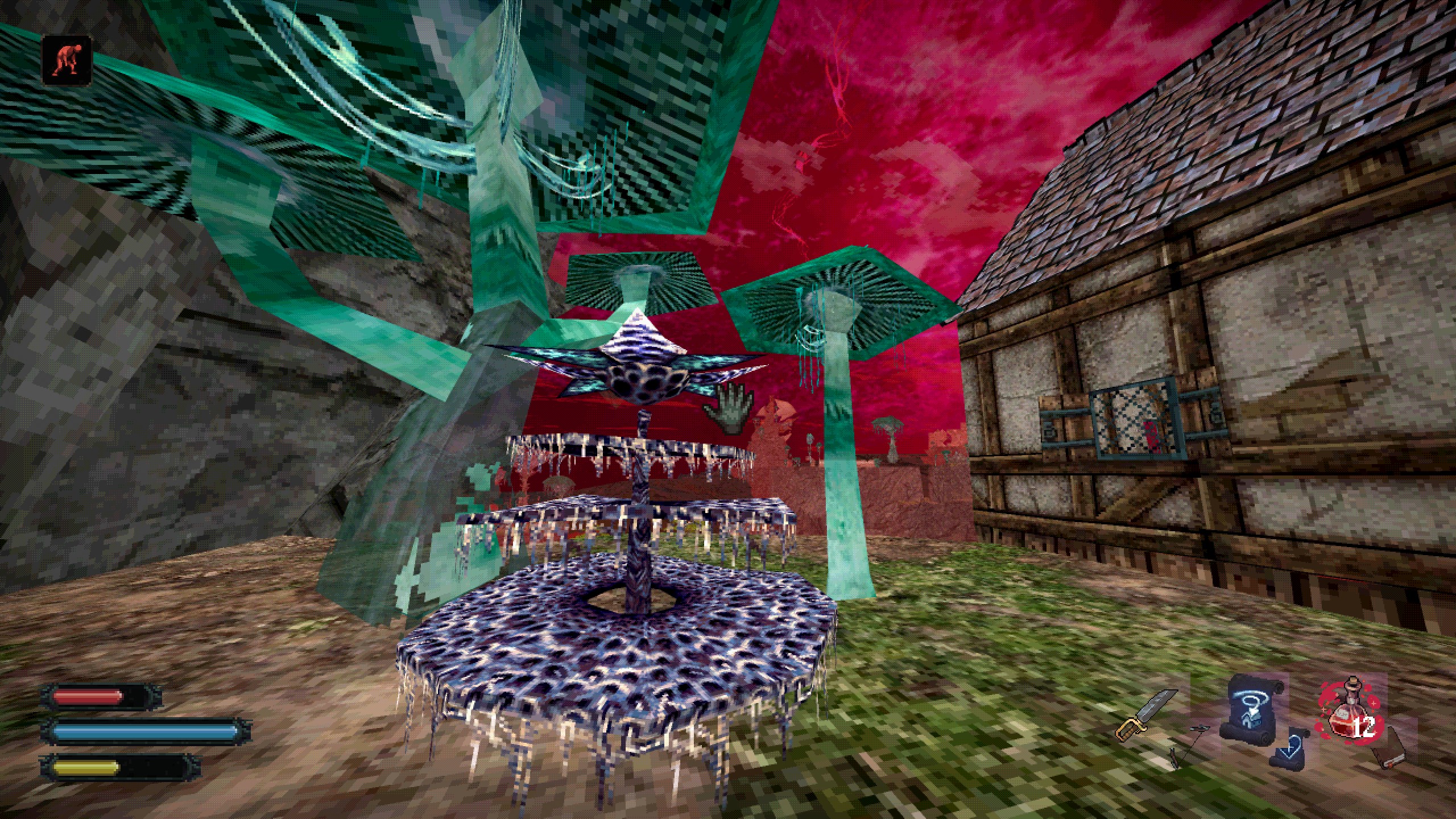 You can keep track of the materials you’ve currently collected in your items tab (the first major tab in your inventory, adorned with a backpack, followed by the middle table with a potion icon). 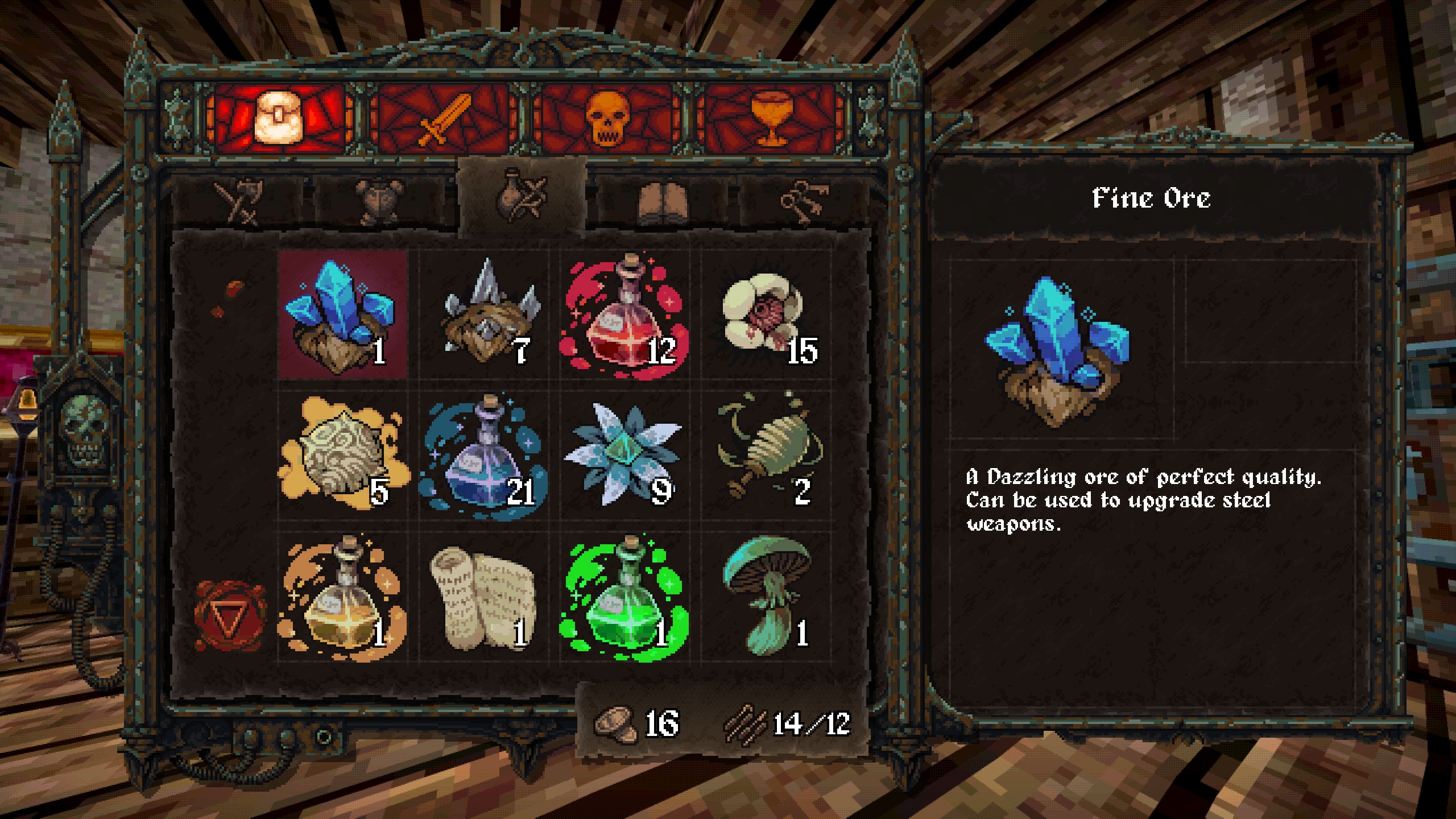 With certain materials, you can create alchemic concoctions at alchemy machines. 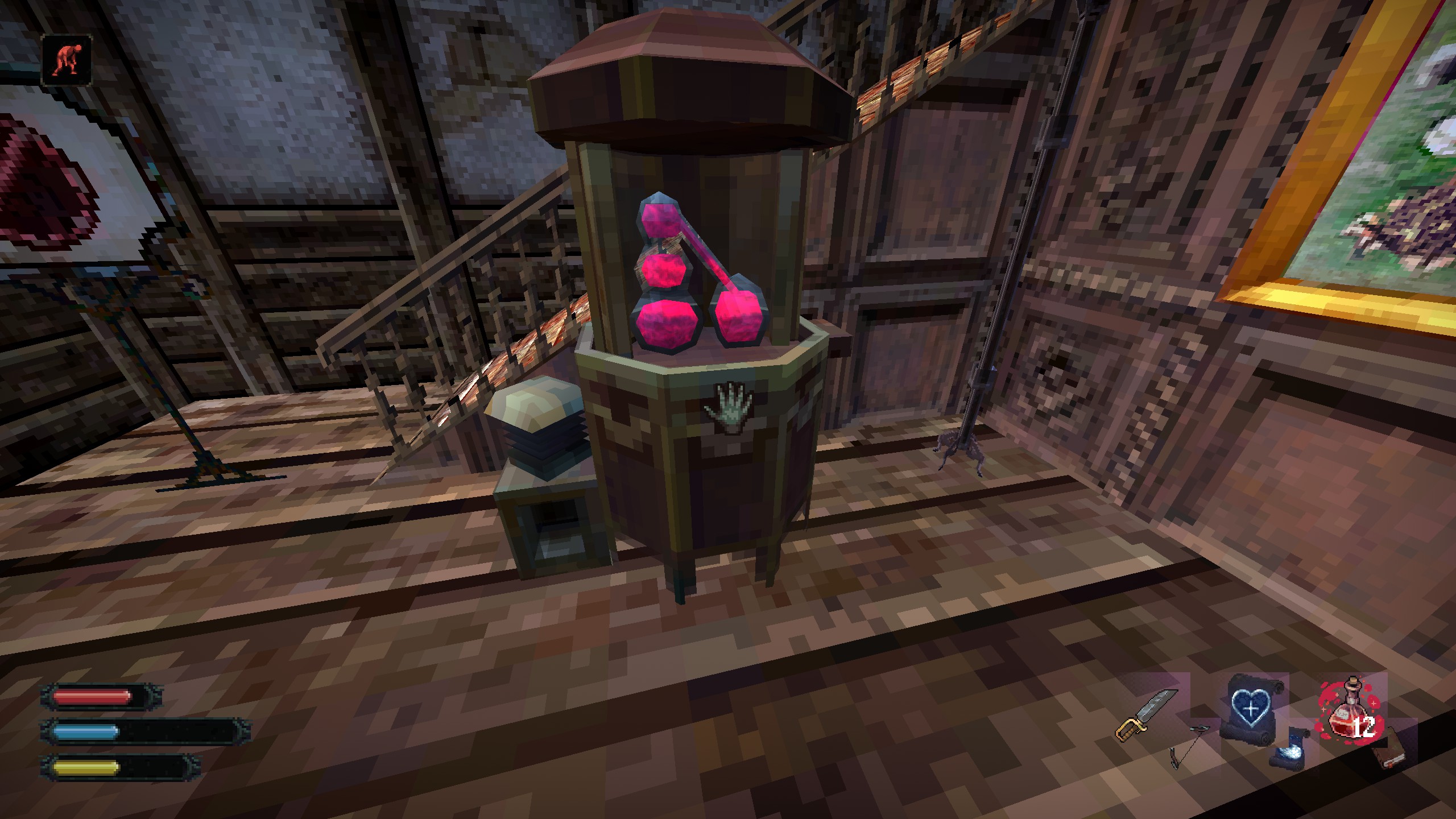 With certain materials and a smith forge, you can create and upgrade equipment 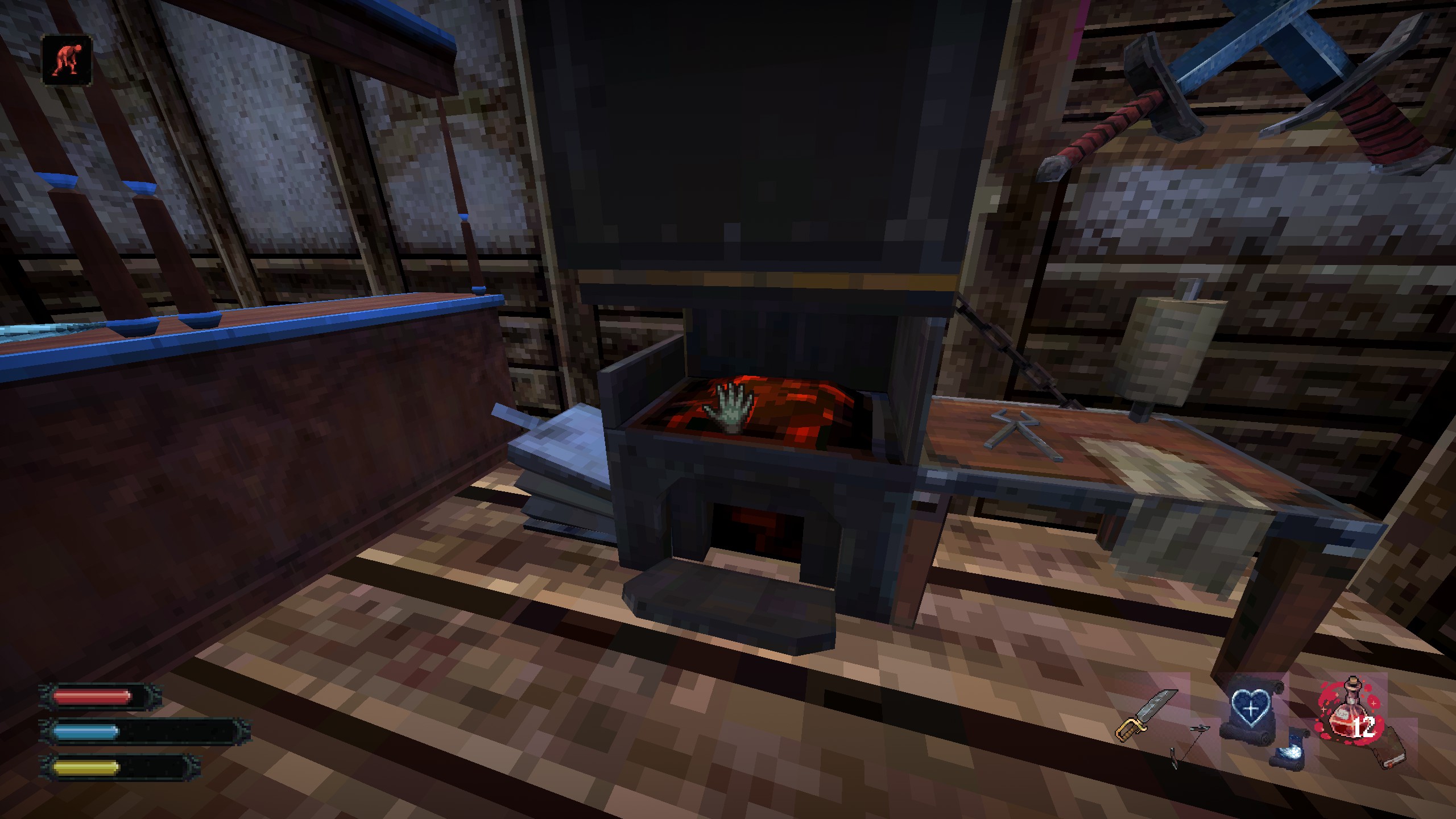 As you explore the Oneiric Isles and meet it’s denizens, you’ll pick up quests of all sorts. Exploring certain areas, collecting certain items, and so on. Instead of a marker to follow, Dread Delusion uses an old-fashioned journaling system, something you can find on the fourth major tab of your inventory (adorned with a goblet). 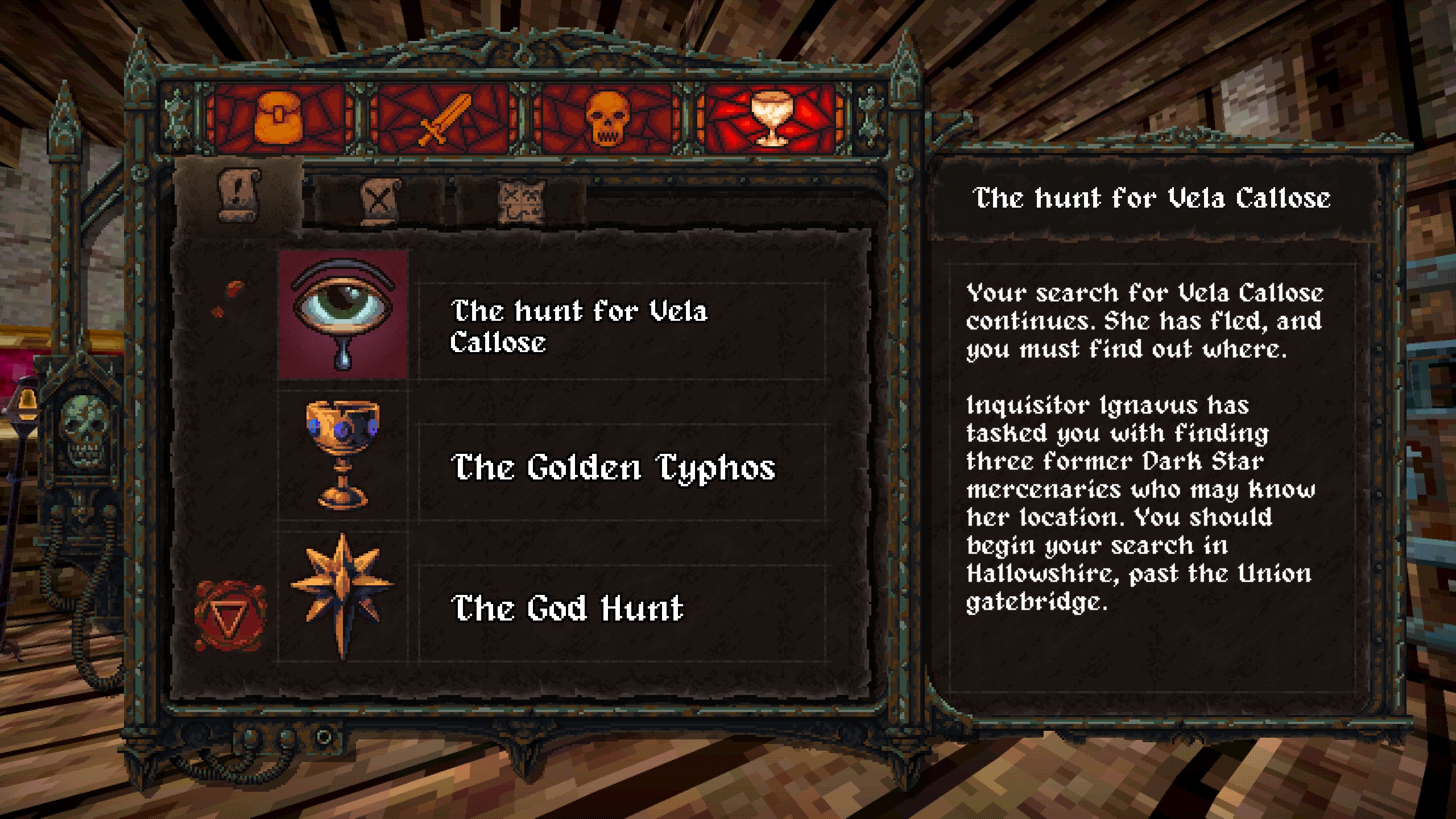 You’ll encounter an NPC in the first isle after the tutorial section that’ll task you with charting the areas of the Oneiric Isles onto a piece of parchment. 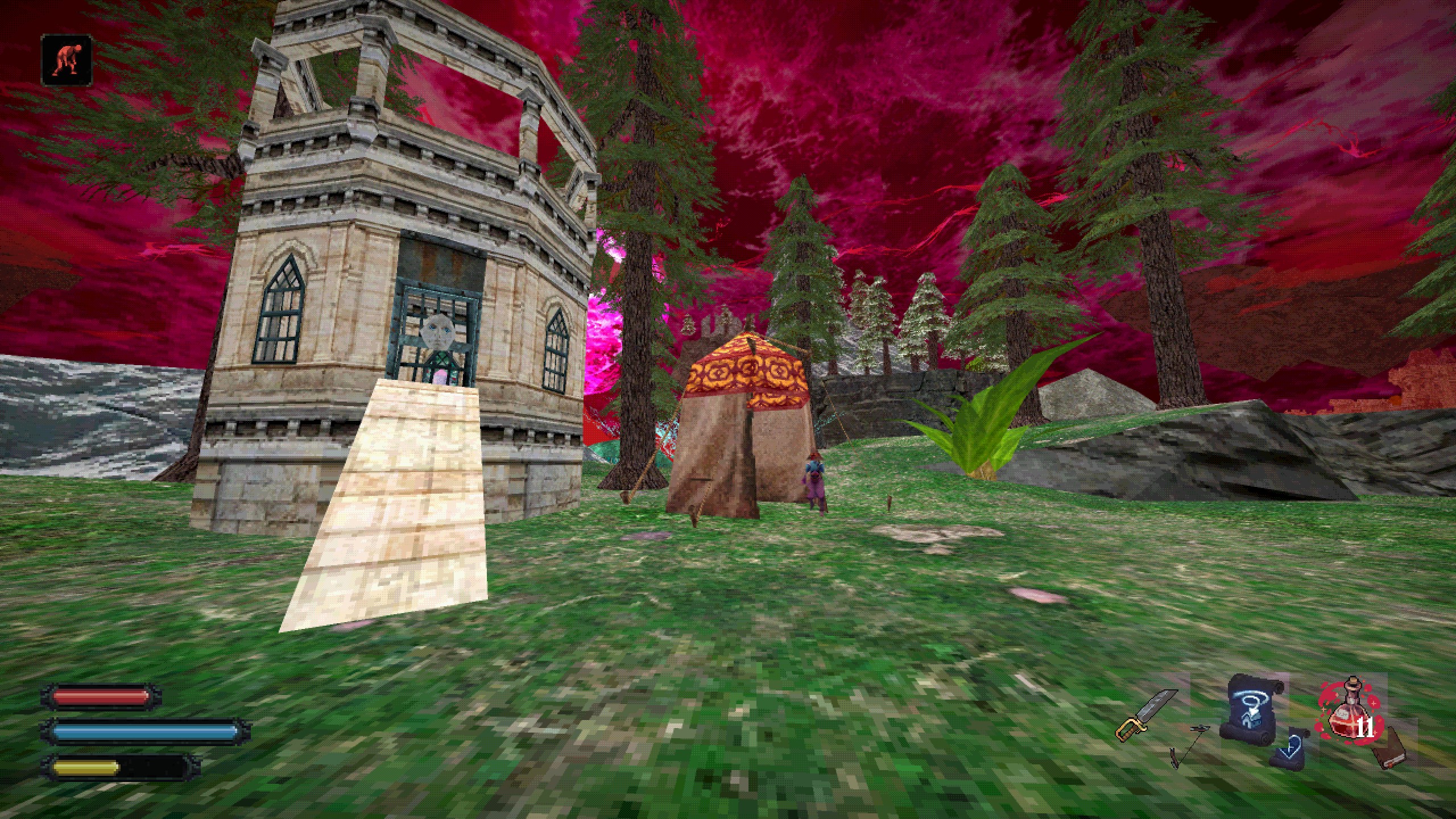 After you collect the quest from the NPC, you’ll be able to interact with certain landmarks in towns and other areas. When you interact with them, you’ll jot down the surrounding area in your map, getting a piece of the larger picture that is the Oneiric Isles. 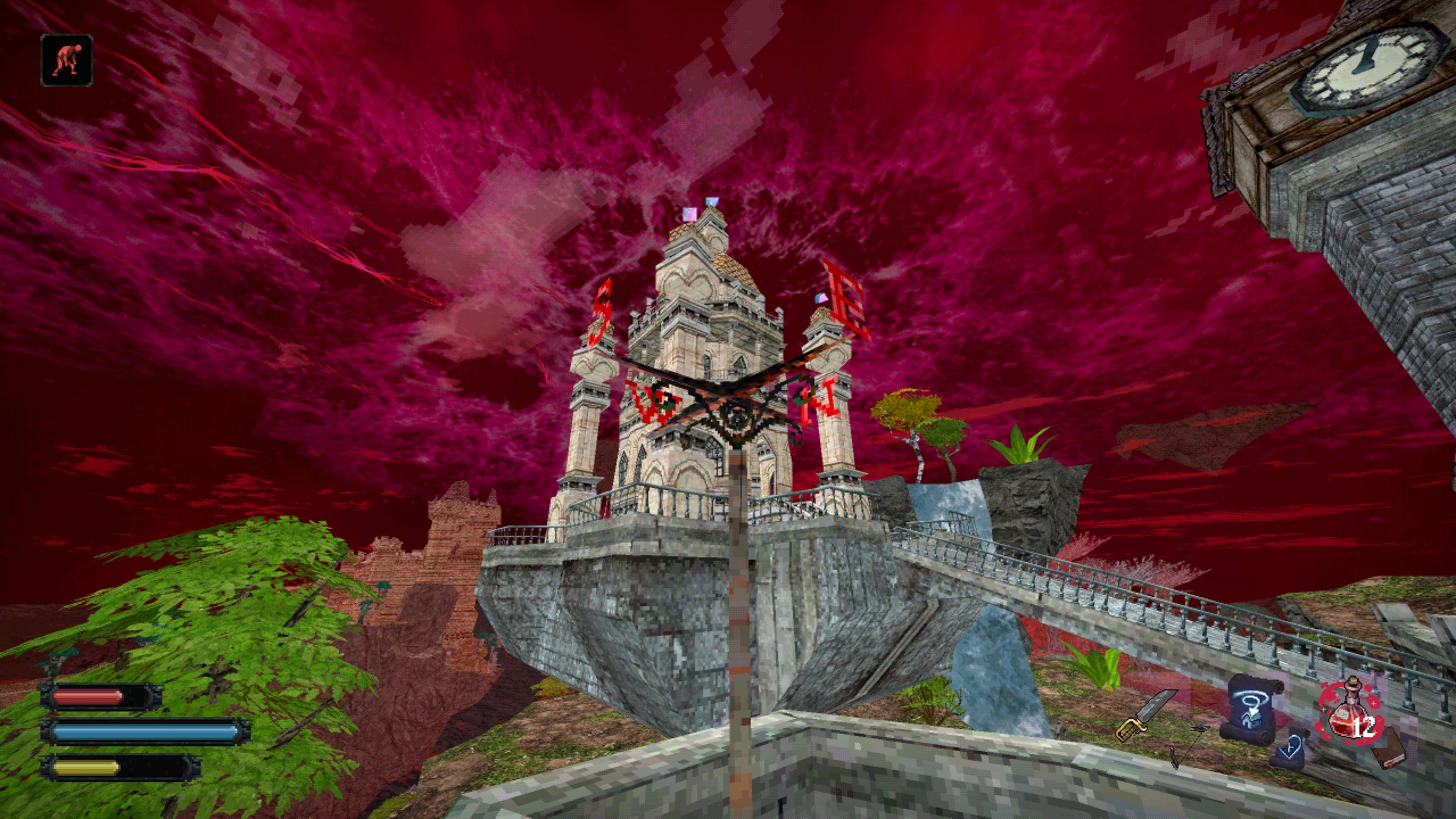 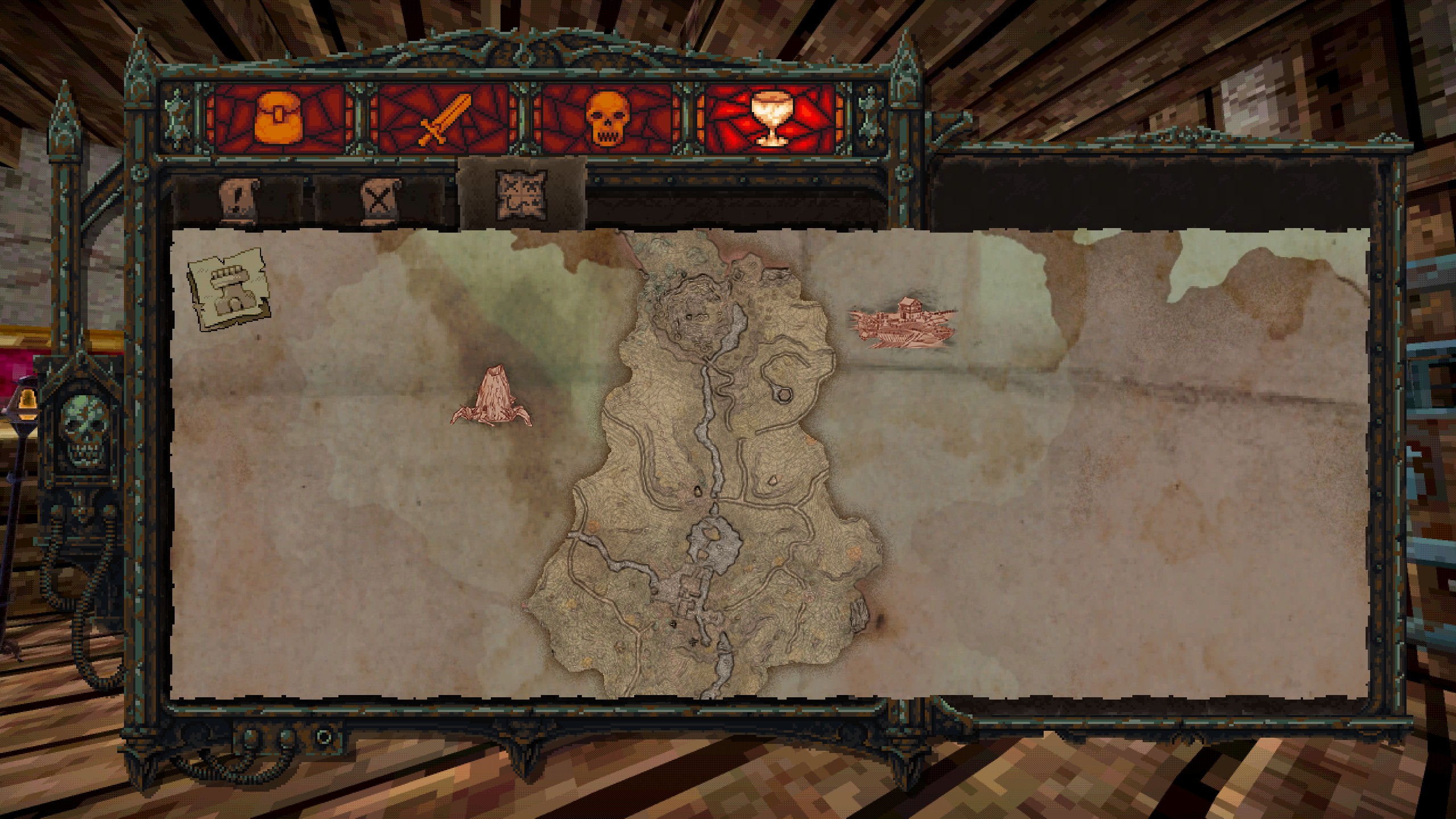 Here we come to an end for Dread Delusion How to Create Character + Save Game + Leveling Stats hope you enjoy it. If you think we forget something to include or we should make an update to the post let us know via comment, and we will fix it asap! Thanks and have a great day!