tips for getting started in Doom Eternal.

The flame belch sets enemies on fire and makes them spit up tiny green armor shards over time. When things are popping off, it’s easy to forget the flame belch is there, but do your best to make a strong habit of using it as much as possible early on, and don’t always use it with the intention of scooping up that armor right away. Set it (on fire) and forget it. Find a group of enemies, give a big fire burp, and let them generate that good-good while you bounce around and shoot things.

If you’re glory killing and moving enough, you’ll keep your health above water. Ammo is a different story. It’s selectively strewn about each arena or available via chainsaw, in which you treat a demon like a meat pinata to replenish stocks. Thing is, chainsaw fuel is limited. Most arenas have a refill laying around, but they’re much rarer than health and shield drops, making ammo something you’ll probably chew through quicker than most resources with fewer options for an easy replenish, at least at the start.

Don’t play favourites with the weapons

If the weak spots weren’t a total giveaway, Doom Eternal wants you to constantly switch weapons when in a hectic firefight. As well as the weak spots, enemies take more damage, can be staggered instantly and some other unique quirks can be triggered by specific ammo types. Now, this is Doom and no one wants to spend their time reading when they could be ripping and tearing through demons, but take a look at the codex to find out what works best for each enemy/situation. Learn the most effective way to deal the most possible damage and you’ll have a lot more success in the harder, bigger battles.

Use the super shotgun to counter marauders

Marauders are designed to mess with your long established arena shooter habits. They control the cadence of a fight, not you. And they’ll have even more control if you can’t counter their flashing green attack effectively. The super shotgun is ideal here. Its wide pellet spray and high damage make counters much easier to time and aim than the rest of your weapons. 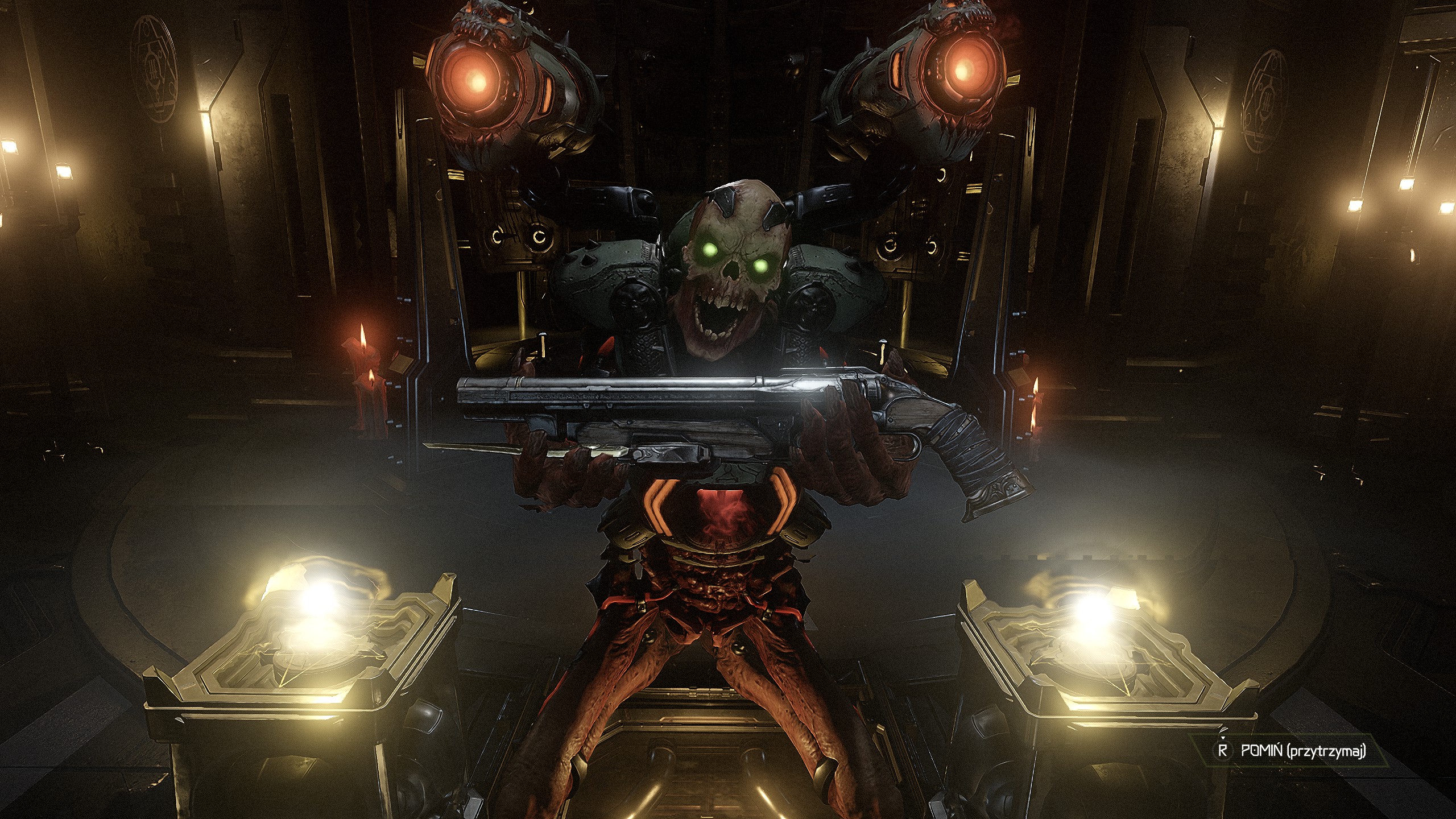 Read the codex for even more demon weaknesses

Whiplash demons are best countered with ice grenades due to their erratic movements and wafer thin profiles. Make ’em sit still for a minute. You can strafe faster than a tyrant can turn. The ballista does extra damage to flying demons. The codex is full of tiny tips that can make a big difference in a tight spot. 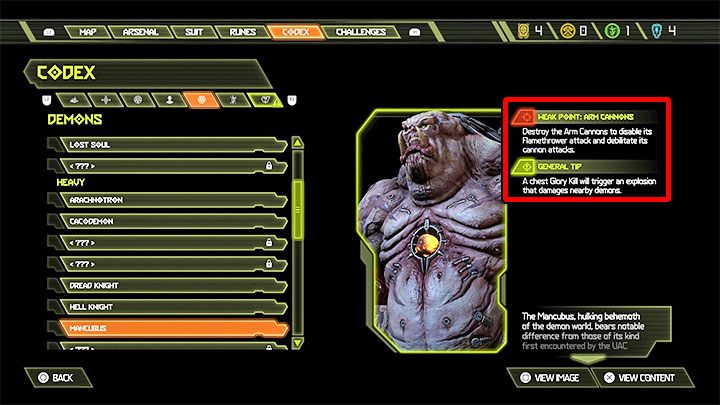 Stay moving and use the entire arena

I know, but it’s extra important in Doom Eternal. Use the monkey bars and jump pads in conjunction with your dash and double jump to stay airborne and relatively safe. A nice vantage of the arena also gives you a sense of what you’re up against, and with sneaky, thin demons like the whiplash with a liquid profile, knowing what kind of demon mix you’re working with is incredibly important information if you want to go about dismantling them effectively.

Get the Precision Bolt upgrade as soon as you can

In a game so fast-paced and aggressive as Doom Eternal, you would think that a considered, accuracy focused upgrade like this scope that turns the Heavy Cannon into a mid-range sniper rifle, would have little place. Hell, in DOOM 2016 it was, for the most part, fairly useless. In Eternal, it’s absolutely essential. You see, most enemies now have specific weak spots – the Arachnotron’s turret, or the Mancubus’ huge gun arms, for instance – and one well placed bolt can ping these clean off, limiting their means of attack, and in some cases, causing the Glory Kill state. 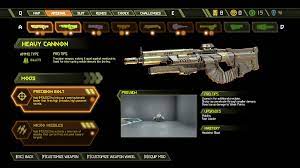 If you’re sitting on a pile of Sentinel Batteries but don’t know where to spend them, head back to the Fortress of Doom and take a walk around. You spend those buggers on extra Doomguy skins and upgrades all around the ship. And they’re not all at the back either. Two skins are hanging out in the wings of the Fortress of Doom, and one’s holding a collectible hostage. Spend those batteries before hopping into the next mission, because it might be awhile before you finish up.

Check the 3D map frequently and view it from different angles

The map in Doom Eternal is the same as the one in its 2016 predecessor – it is made in 3D. The map is very useful for identifying places that you haven’t visited yet – the studied places are marked in green, and the places where you haven’t been yet are gray. This is a great hint if, for example, you want to discover 100% of the secrets available in a given mission. Keep in mind that locations in Doom Eternal often have a vertical and/or multi-level structure. The game allows you to rotate the map at will, and this option is definitely worth using.

The places you visit in Doom Eternal hide a lot of collectibles, and many of them are behind weakened walls. You can easily recognize these walls by the cracks – they aren’t always green. Also, check the less-lit corners of the rooms you visit so that you don’t miss any of them. 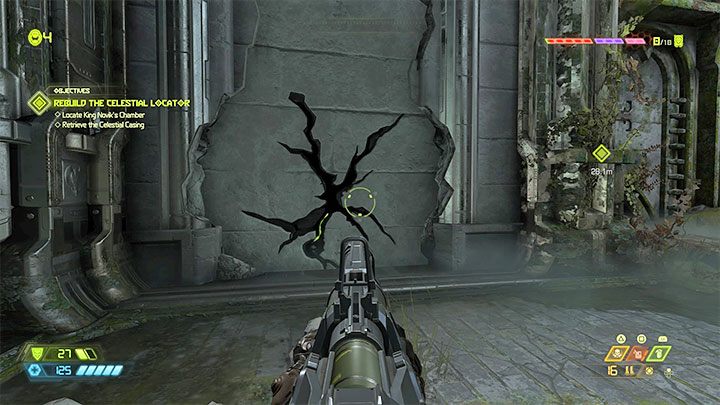 Try to save extra lives for the most difficult battles

In Doom Eternal, you can find and collect extra lives that can protect your hero from death. Unfortunately, every life is a one-time consumable item and will be lost even if you decide to load a saved game. Extra lives can help you survive the most difficult battles. In particular, we are talking about optional battles discovered by careful map exploration and boss fights. As far as possible, try to avoid death in common and standard battles in order not to use up your current supply of lives. Try to save them for later.

Hope you enjoy the post for DOOM Eternal Some tips how to get started playing the game, If you think we should update the post or something is wrong please let us know via comment and we will fix it how fast as possible! Thank you and have a great day!