It is no secret that the driller struggles the most with the majority of the mechanical enemies in the game. This build is tailored to eliminating robots with extreme prejudice, making the driller one of if not the strongest class for search and destroy missions or rival presence warnings. 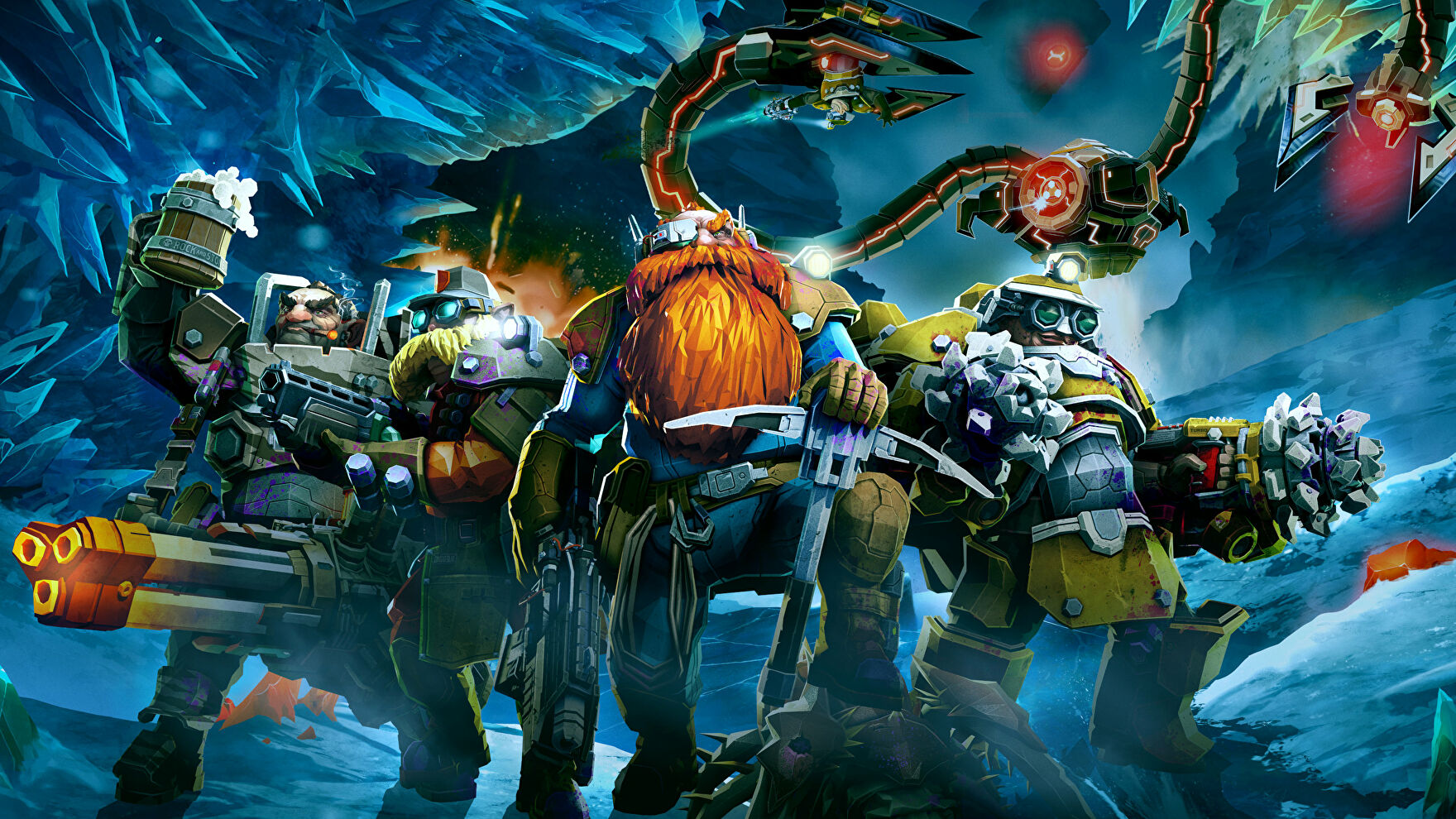 It is no secret that the driller struggles the most with the majority of the mechanical enemies in the game. this build aims to help alleviate these struggles, without compromising the driller’s ability to deal with non-robotic threats.


In addition to weapon terminal screenshots this guide uses strings of numbers for weapon builds, in the format (12321). This is what most of the DRG community uses when discussing builds, and makes communicating them over chat much easier. the number’s position in the string refers to what tier of modification, while the value represents which mod within the tier is selected, left to right. (12321) would correspond to the leftmost mod in tier 1, the middle mod in tier 2, and the rightmost mod in tier 3. with the 4th tier mod in the middle again and the leftmost for tier 5.

If a choice of mods is conveyed as ambiguous or up to the player in a tier, a star * is placed in that tier’s position in the string. (123*1) indicates that tier 4 is any of the available mods.


This build is also available on karl.gg for easy reference, or if long numerical rambles are not your thing: https://karl.gg/preview/9872#/ – [karl.gg]


This build primarily exploits the effect heat has on nearly every robot in the game; they explode and die instantly when they reach their ignition temperature, Only the caretaker’s main body (but not its arms) and the prospector drone are unaffected by this, due to their immunity to fire damage.


Additionally, the ignition temperature for all* the (non-immune) robots is 100 degrees or lower, making them as easy to ignite as a praetorian. Unfortunately while praetorians are big, slow, and easy to hit or lead into sticky flames, robots are not; using shields, ranged attacks, and sporadic flying movements to avoid or nullify all then things that make the driller good against things like a praetorian.


*the nemesis has a much higher and as of writing unknown burn temperature, however it will still explode when its limit is reached.


The flamethrower in this build is tailored to robot destruction; the other weapons are built for everything else, with one or two adaptations for helping against robots. 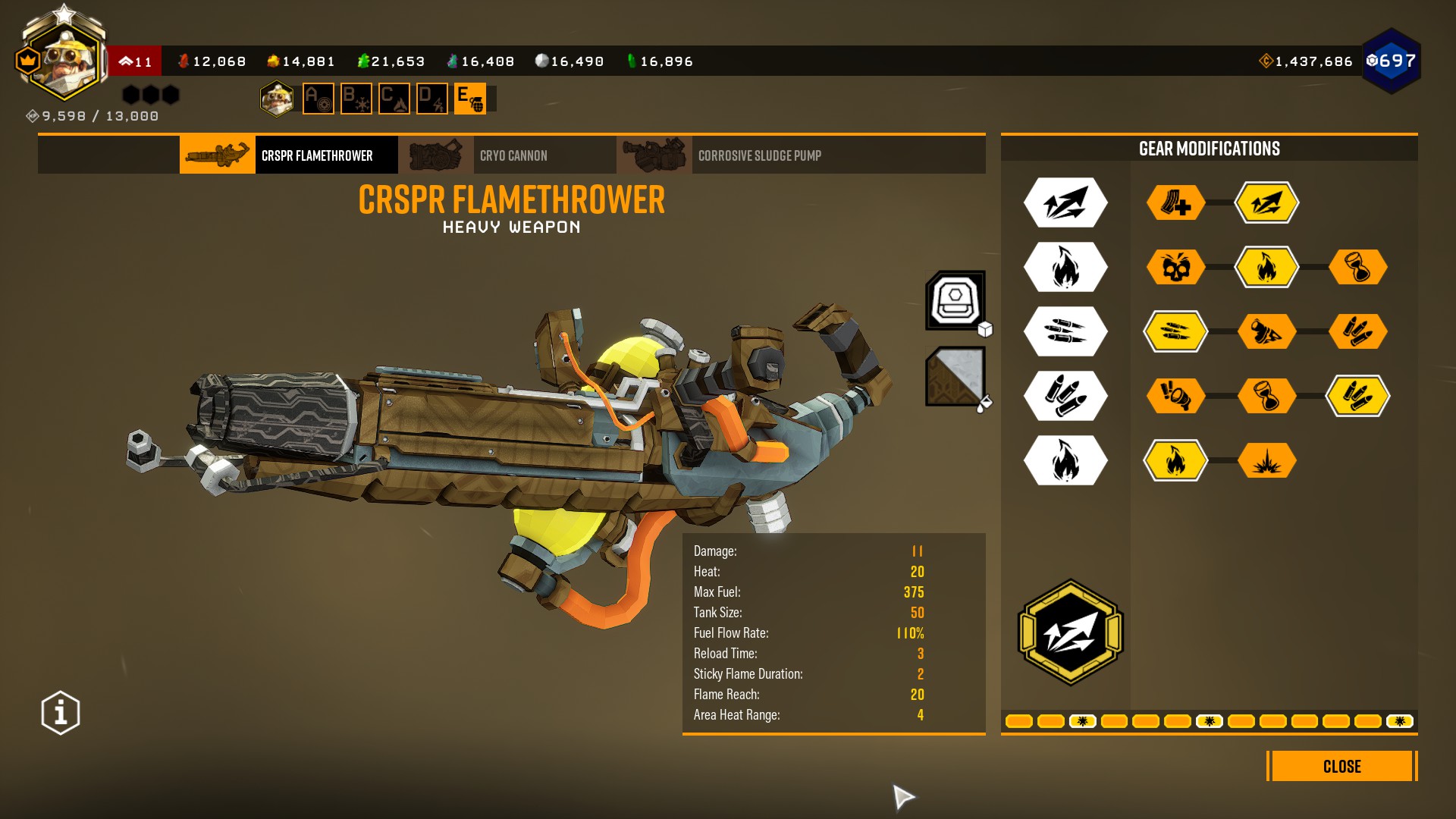 The flamethrower for this build is based around 2 key ideas: reaching far away enemies, and quickly lighting things on fire.

While the overclock of choice Fuel Stream Diffuser slightly hampers ignition speed by lowering the flamethrower’s fire rate, it more than makes up for it in the range category, allowing the flamethrower to reach targets up to 20 meters away, which is crucial for dealing with enemies that prefer to hang back and shoot at you rather than brainlessly walk forward like the glyphids.


The mod configuration I chose to facilitate these ideas is 22131 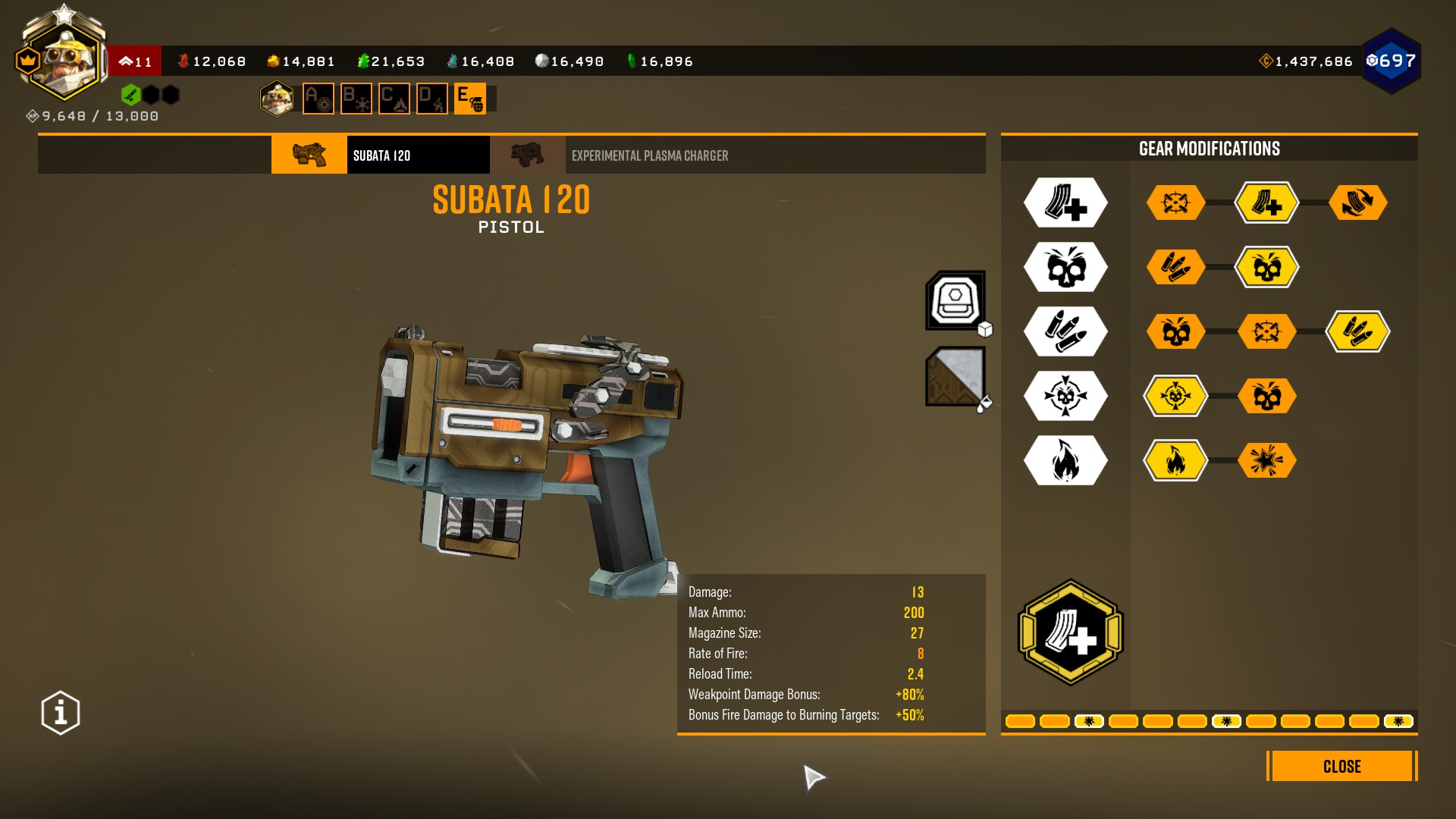 While the subata is generally seen as inferior compared to the other driller secondaries, it has many useful qualities that compliment the flamethrower build in this guide, which are hard to come by in the other secondary weapons.


The subata is the only weapon driller has which can reliably benefit from weakpoint damage, which is essential against the fire immune robots. It even comes with a 20% weakpoint damage bonus baked in.

The oversized magazine overclock may seem like a bit of a weird choice, but 27 bullets is more than enough to deal with most threats, and between reload animation cancelling and the born ready perk, the downside is largely negligible.


The weapon mod build I gravitate towards is 22311, but realistically and variation of 2*3*1 works incredibly well. 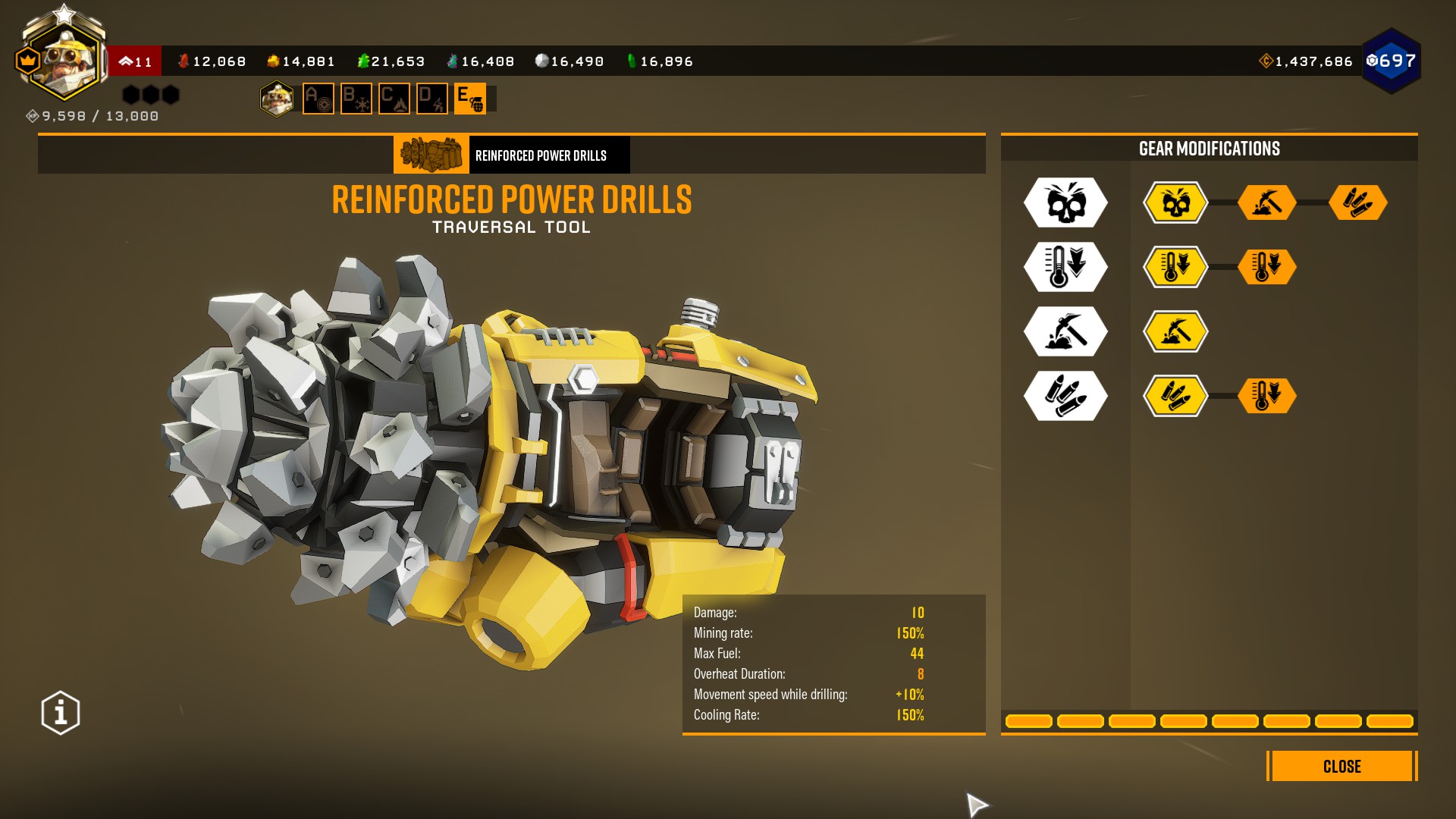 there is not much to be said about the power drills, besides the fact that by taking barbed drills makes shredder drones die is 2 hits rather than 3. but considering how fast drill hits trigger, this is a small optimisation at best. if surrounded by shredders, take out the drills and wave about like crazy. 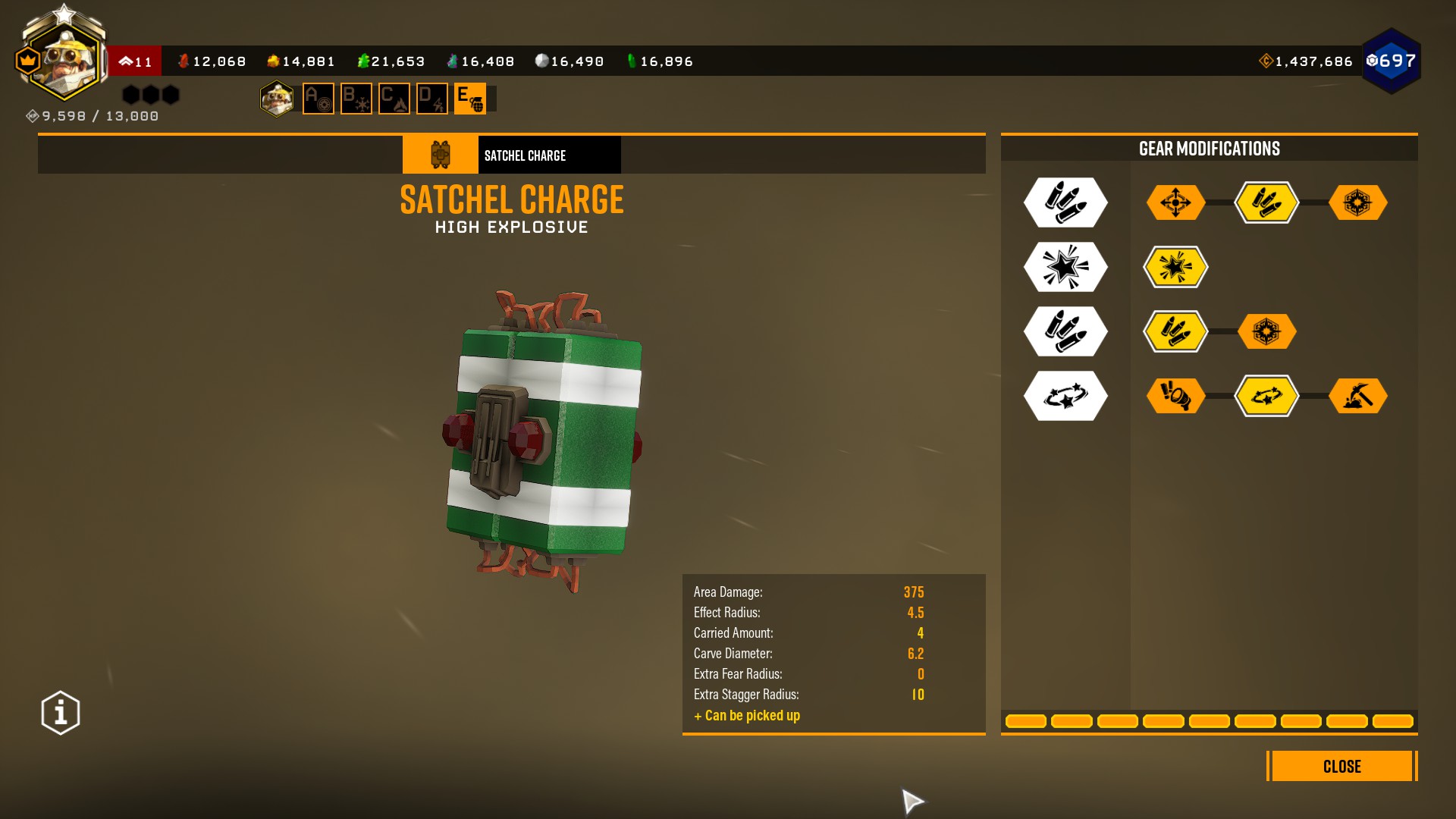 This satchel charge is built for wave clearing, with both ammo mods taken so that 2 satchels are received every resupply, and stun for crowd control. fear would work too, but stun is somewhat more reliable against creature that have a high fear resistance like praetorians. 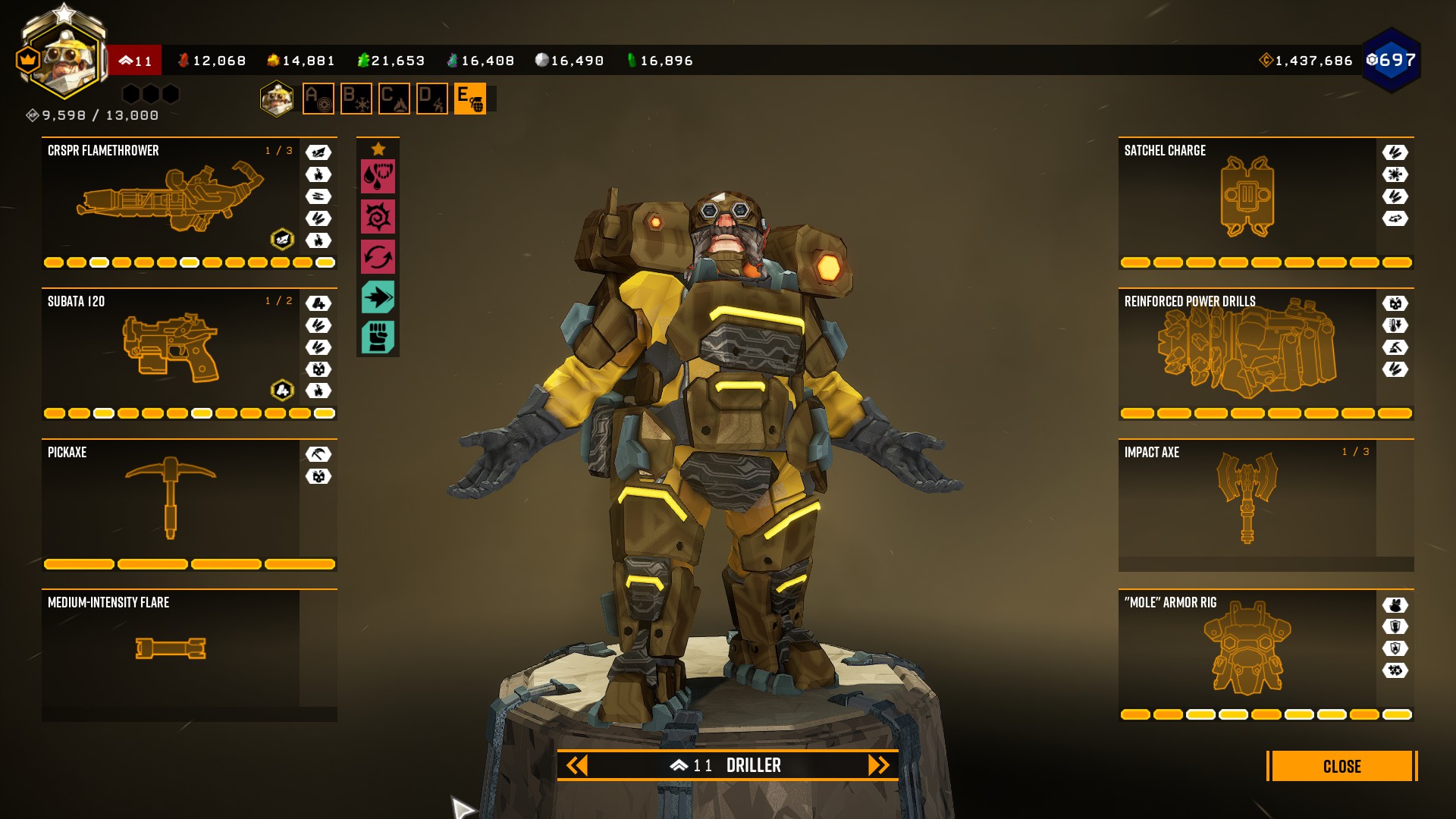 Armour is completely up to player preference, although I recommend bigger mineral bags, healthy, fire resistance, and breathing room. (3213)


the driller has one spectacular grenade slot item, one decent, and one less decent option for grenades. this build takes the Impact axe, as robots have a 3x weakness to melee damage, and a 2x weakness to explosive damage, both of which the impact axe provides.


for the pickaxe extra power attack damage is taken, as with the damage bump it can one shot repulsor turrets. extra effect radius may be useful against shredders, but the driller has many other tools for dealing with them. (11)

Enemies and their breakpoints

All enemies in DRG have an unchanging base health total, and an effective health total which is calculated from the base health and the hazard difficulty of the mission. The HP values included below are all hazard 5 with 4 players, which is what was used for calculating the breakpoints.

Heat resistance and burn temperatures do not scale with hazard level whatsoever.

while not the main point of the build, I have found some easy to use breakpoints and strategies for other, non-robot creatures as well.

I hope this build could provide some helpful information and strategies as season 2 begins, I hear a lot of griping about the robot enemies in lobbies which is what pushed me to make this guide.


I am still working on formatting, as this is the first steam guide I have ever made, so please let me know how I could improve it, I want to start making more of these with other builds I have designed in the future.


all images are from DRG promotional material, my own in game screenshots, or from the DRG fandom wiki.

This is all for Deep Rock Galactic Driller Build Overview hope you enjoy the post. If you believe we forget or we should update the post please let us know via comment, we will try our best to fix how fast is possible! Have a great day!