How to be successful with Lucky in Dark Deception: Monsters and Mortals.


Personal problem out of the way, welcome back to the “How To:” series, where we go over every character and how to use them. Today’s contestant was added in the 1.6.2 update, aka “The Joy Joy Update.” To celebrate, it’s only fair that we cover the Joy Joy Gang’s leader first. He never loses, so he says, which is why his name is Lucky!


Lucky proved to be a huge annoyance in Mascot Mayhem, where he would randomly activate a speed boost of his own to catch players off guard during a chase. This combined with his frequent teleporting to cameras made him a formidable opponent in the level, especially alongside Penny and Hangry depending on the zone. In the end, he even proves true to his word, as he does indeed manage to defeat Doug Houser thanks to the combined efforts of his gang, their clones, and Joy Kill, making them the only Monsters that were successful in stopping him. We’ll cover Hangry and Penny next in that order, so lets not waste any more time. How good is Lucky? Let’s see how Lucky he is outside of Joy Joy Land and find out!

Even though he’s fast as hell boi in the base game thanks to his speed boost, Lucky is not a Speed Monster. Instead he is a Monster belonging to the Balanced class. This makes him average at collecting shards, as well as being average in combat. Despite this, however, Lucky has key traits that allow him to be an effective PvP Monster. The first of them involve Lucky himself having very favorable hitboxes on his attacks, meaning there’s a good chance he’ll be landing hits when in realistic ranges (unlike characters like Murder Monkey and Nurse, to name a few). Secondly, Lucky is the quietest Balanced Monster, making him very difficult to keep track of. This makes him very good at ambushing if players aren’t attentive to sounds if Lucky was selected as the Monster. He also has attack speeds similar to Robbie, allowing him to deal damage very quickly. Finally, his Ult is very much offensive based and is very comparable to notorious Mortal, 8-BitRyan, allowing him to drain health extremely quickly. It also gives him a free escape option if he has nothing else to use when in need of healing.


For as many good things Lucky has, he is unlucky enough to have some weaknesses, many of them not that big of a deal. The first is that he has no range to speak of, meaning he has to play close range at all times, even when his Ult is activated. This leads into the next point; he is vulnerable to bananas. Many people see them as useless, but the banana is actually way more useful than you think. They’re most effective when the pursuer is right on top of you or you sneak them around a corner where most don’t expect. Unfortunately, much like Brute and Murder Monkey, Lucky unfortunately suffers from this weakness, as it is able to leave him open to attack, as well as cancel his Ult if it’s active at the time of the stun. Finally, he can have trouble against some of the more prominent characters, as their stats and Ults can give him a hard time if they’re properly utilized. Lucky isn’t a slouch against them either though, as he has plenty of strengths and a powerful Ult of his own to flex on. Speaking of… 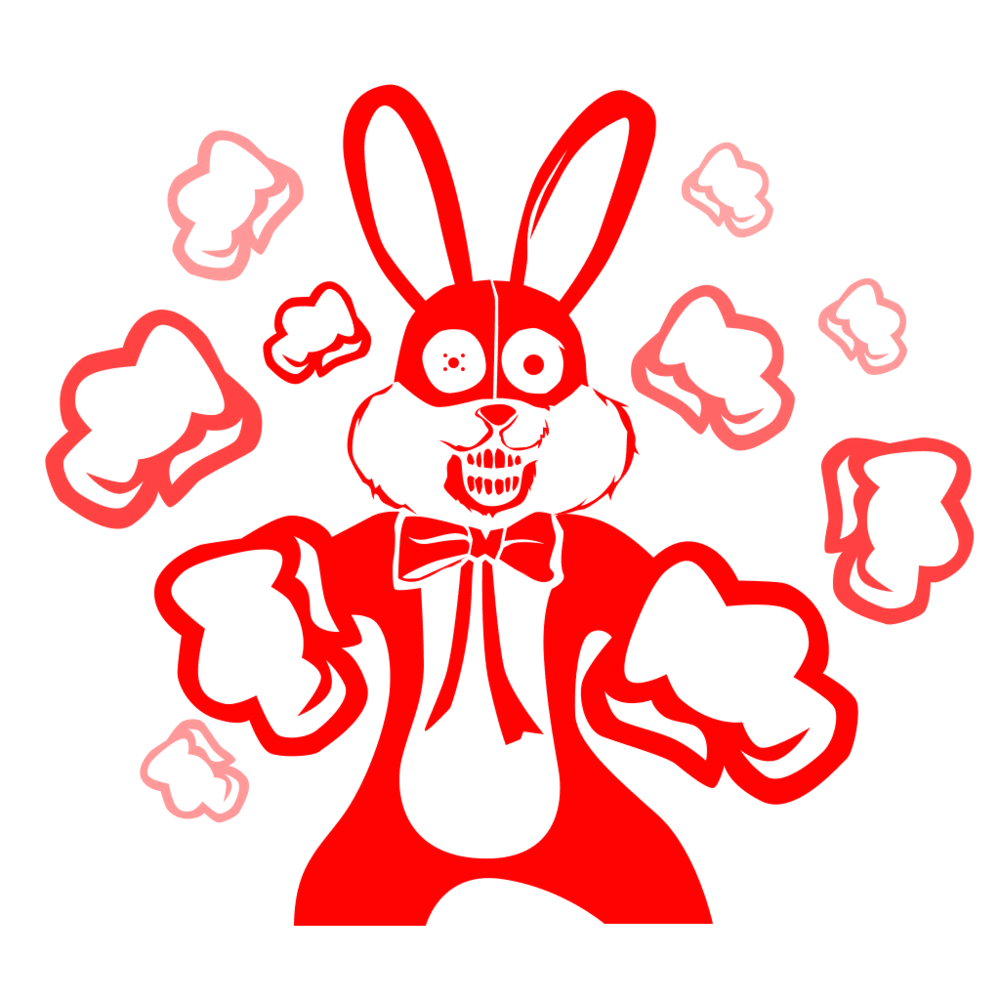 When Lucky managed to kill you in base Dark Deception with his speed boost active, he would proceed to use you as a punching bag. Well, that returns as his Ult in Dark Deception: Monsters and Mortals. Lucky’s Ult is referred to as “Bunny Barrage” and when activated, Lucky activates his speed boost for five seconds. Anyone he comes into contact with during this time will proceed to get stunned and beaten up by Lucky for 8 damage a hit. In total, the Ult itself does 96 damage, but the victim is stunned long enough to sneak in one extra heavy attack, adding up to 156 damage. It also applies Fear to the target for a little bit as well. This makes Bunny Barrage VERY good at chipping opponents and making it much easier to kill, which is fantastic given Lucky has good hitboxes. Alternatively, the Ult is able to be used as an escape method, as Lucky does get an increase in speed while it’s active.


However, for how good this Ult is, especially for a Balanced Monster, it does have its weaknesses. If Lucky gets hit while the Ult is active, it will proceed to end early, much like 8-Bit Beatdown and Ducky Surprise. Additionally, stuns will also disable it, meaning Lucky has to be wary of primal fears or bananas when approaching his target, otherwise the Ult is wasted. Finally, it can come up just short of killing at times, meaning it doesn’t kill all the time if he doesn’t chip his targets first. Overall, Bunny Barrage is a much more balanced version of 8-Bit Beatdown and Ducky Surprise, being very useful as a chipping tool, a finisher, and an escape tool all in one. However, he much be careful when using it, as it does have its weaknesses.

In Maze Escape, Lucky performs admirably thanks to the lower stats of Mortals combined with his own excellent traits. 96 hp from Bunny Barrage is a lot of damage to many Mortals, and if you count the free heavy attack afterwards, most Mortals will not be able to take another heavy attack, making them easy pickings. His generous hitboxes also allow him to perform very well in combat without Bunny Barrage’s aid, as he can land his hits easily, especially if he’s the one hosting the match. Bunny Barrage is more reactable than other Ults, so a good tactic if you have your Ult ready is to use it when you’re a short distance from Mortals in order to avoid their own Ults in return via giving them less time to react. Due to the threat of being pummeled with the Ult as well as Lucky’s own hitboxes, these make Lucky a big deal in Maze Escape, where others will have to stay cautious of him if he’s the Monster. However, Lucky’s weakness to bananas can be exploited since the banana tends to be a common item, allowing opportunities for Lucky to be unlucky and make himself open for attack, reducing his chances of engaging unless he has Bunny Barrage to help him or he gets medkits. Overall, Lucky is a very strong Monster in Maze Escape, but he has a fair share of counterplay available and has to compete with Dread Ducky, who has range and an instant Ult.


In terms of maps, Lucky is excellent on Elementary Evil and Monstrum Madness since the fake portals and ABC Letters, as well as steam and Super Brutes can make his job much easier, Bunny Barrage being able to buy time and get the Super Brutes caught up to the Mortal running from them. Stranger Sewers is a decent map due to its linear nature and beneficial use of Bunny Barrage being able to stun Mortals into Doom Ducky, as well as just helping him catch up in general. Deadly Decadence is a great map to ambush from, but the map doesn’t offer useful traps and boss due to being basic or RNG based respectively. Monkey Business is an excellent map, but Trap Time can be a nuisance for him since…banana. Silent Sacrifice is really open and the Air Screamers being a pain harms Lucky more than helpful, as they can easily chip him and are plentiful.


Lucky has a powerful matchup chart and is one of the few Monsters that can comfortably take Vince on without fearing You’ll See thanks to the effect being removed if Vince gets hit with Bunny Barrage. Heather can completely negate Bunny Barrage thanks to Seal of Metatron, 8-BitRyan can snag him and cancel it while dealing 50% health to him. Borisov can slow him and kill him easy with proper baiting, but Bunny Barrage can whittle him fast. Evans can stop Bunny Barrage, but is helpless if Freeze Flash is unavailable. Finally, Bierce can instantly regain her health to negate Bunny Barrage’s effects, making Lucky have to work to kill her.

The power of Bunny Barrage and Lucky’s hitboxes continue to make him a good PvP Monster in Shard Mayhem, as there are far less Ults capable of stopping his own. However, thanks to everyone having increased health and damage, as well as primal fear being accessible to everyone, Lucky has to remain careful of his surroundings in order to not waste Bunny Barrage. He is really good against the Speeds and other Balanced Monsters due to being able to whittle them down very quickly, but the sheer strength of the Power classes means he should not risk a fight with them without an item or Bunny Barrage to assist him in taking them down since he can only take three heavy hits from them. If played properly, Lucky proves himself to be very capable in this gamemode. However, thanks to everyone having increased stats, he can have a harder time here than in Maze Escape overall.


Maps remain the same. Phantom Malak is still an annoyance like he is to everyone else not speedy.


It’s mainly Powers that Lucky realistically has a hard time against thanks to their overall Power and health making Bunny Barrage not nearly as effective against them, while he himself is threatened by them. Dread Ducky is Dread Ducky. Reaper Nurse isn’t as free of a matchup since she does outrange Lucky, but Lucky is able to pull her out of Vaccination Time and kill her if he catches her. Brute is also his best Power matchup since Magma Charge is canceled thanks to Bunny Barrage. Finally, Lucky can easily beat Penny 1 on 1, but Penny is faster, has a ridiculous amount of health, and eggs, so if Lucky isn’t able to catch up to her and she’s landing all her hits, he can struggle.

Lucky is a welcome addition to the Monster side on Dark Deception: Monsters and Mortals. He can be seen as an 8-BitRyan on the Monster side since the two are very similar in how they play. However, Lucky only deals a set number of damage as opposed to a percentage. To compensate for this, Bunny Barrage is able to be versatile and used in other ways that can be of use to the player operating the terminator rabbit. His favorable hitboxes combined with this kind of Ult allows Lucky to be a very powerful Monster when mastered. Overall, if you enjoy a versatile PvP Monster that’s strong in both gamemodes, please take Lucky into consideration!

This is all for Dark Deception: Monsters & Mortals Lucky Gameplay Tips – Character Guide hope you enjoy the post. If you believe we forget or we should update the post please let us know via comment, we will try our best to fix how fast is possible! Have a great day!