How to be successful with Hangry in Dark Deception: Monsters and Mortals

Welcome back to our joyful adventure in the “How To:” series. Thanks to the Joy Joy Gang releasing, we’ll be focusing the trio down before we cover anyone else.


The next member of the Joy Joy Gang is our favorite glutton, Hangry! He’s a pig, ribs are his joy, and he goes a little crazy around them, Hangry proved to be a very scary opponent in Zone 2 of Mascot Mayhem. His ability to break doors wasn’t too special, but his ability to ambush from walls causes anxiety to players and as a result, Hangry was the one people seemed to die to the most not counting Joy Kill, who was the boss of the stage. Due to being the slowest of the members, but also the strongest, it was no surprise Hangry wound up being a Power Monster in this game. So with all this out of the way, let’s explore this mad, mad world and find out if the Notorious P.I.G is good or not! 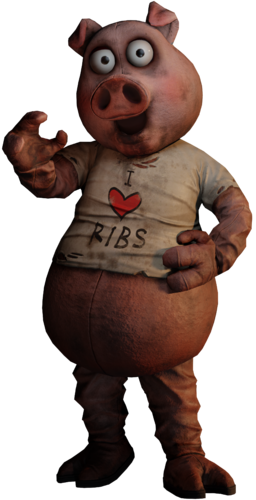 As stated above, the traits Hangry possesses in the base game make it no surprise that he is a Power class Monster in Dark Deception: Monsters and Mortals. This means that he is extremely good in the PvP scene thanks to having high damage and high health to back him up. However, he suffers from low speed in order to balance him. One thing to note, however, is that this specific Hangry does NOT run out of breath here, which is already a great trait, as he can always keep his chases going forever like every other Monster can in this game. In terms of actual traits, Hangry may seem like he is outclassed by the other Powers, and it’s not hard to think that. Malak and Gold Watcher have range (the latter on everything, the former on Ult), while Brute can fix his speed issue. So what separates Hangry from them? Well…he is the definition of an offensive character, and his defining trait is that thanks to a combo involving his Ult, he has by FAR the best immediate damage output in the game. As a result of this, he may have a hard time chasing opponents, but if he manages to catch up, that person is basically dead. Another defining trait is that his footsteps are extremely quiet, meaning the fat swine is surprisingly fantastic at playing the ambush game. It’s so quiet to the point where Gold Watcher pales in comparison. Another great trait is that he has actually decent hitboxes on his attacks, meaning as long as latency isn’t messing with him, he’s very good at making his hits count.


Since he’s a close ranged demon, he has competition with Brute in this role. While Brute does extreme damage over time, it’s mainly thanks to the fire effect on Magma Charge whittling people down, potentially giving them time to react and get Ults up or get medkits before they die. Brute is also banana prone due to this. However, Hangry possesses NONE of these problems since his absurd instant damage happens…well…instantly, so many players won’t be able to react to him as well as they can with Brute. That and he has better hitboxes, meaning Hangry is overall the stronger Monster of the two despite the fact Hangry needs to ambush or gets Speed Boosts or Speed Drains in order to catch up. Since we’re on the topic of instant damage, lemme tell you about that combo that makes Hangry such a threat…

…this is the source of it right here. Hangry’s Ult is referred as “Rib Crusher,” referencing his love of ribs. When used, Hangry jumps up and ground pounds, dealing 120 damage to everything around him in a shockwave. The shockwave’s range is around a little less than Eye of Suffering’s range, meaning he can afford to let players have a little range on him before use. This Ult is already strong as is, but it can be followed up instantly after a heavy attack in order to deal a total of a whopping 200 damage in total of the two attacks. This combo alone completely flattens every single Mortal in the game except thee Powers, who will live with 40 health. This also applies with Balanced Monsters, and it can deal a hefty chunk to opposing Power Monsters, as well as drain half of Ranged Monster’s HP. In regards to Speed Monsters…yeah, Hangry deletes them instantly with that combo, making him a hard counter to all of them at the moment. Since the Ult does AoE damage, he is able to catch more than one person as well, making him good at interrupting fights in Shard Mayhem by simply sitting on both of them at once. Did I mention the shockwave also goes through walls?


Overall, this Ult is incredible, as it allows Hangry to basically murder half the game’s roster instantly and leave everyone else moderately to severely crippled. It lacks defensive use, but it’s perfectly fine since Hangry is a close ranged hyper offense Monster anyway. His defense is primarily his high HP. Long story short, if Hangry manages to get in range of his target, they will not be having a good time. Remember, the piggy’s got a kill streak, so read the fine print before it’s too late.

Remember in “How To: Brute” where i said Brute was an absolute force in this gamemode? Well, he still is, but Hangry takes the force to a whole new level of extreme. Hangry is an absolutely oppressive Monster in Maze Escape if used properly, as his good hitboxes, very quiet footsteps, and Power class stats make him already iffy to play against. Combine these traits with an instant use Ult that can deal immense damage means that Hangry is able to make short work of Mortals very quickly. By very quickly, I means instantaneously. Hangry can simply use one heavy hit, followed up with Rib Crusher, and those two hits autokill every single Mortal in Maze Escape who isn’t a Power class. However, since Power Monsters can outrun Power Mortals, Hangry can simply give chase to the surviving Power class and finish them off with a light hit. All these traits combined means that unless you’re a Power character, Hangry is an extreme threat to play against. DO NOT APPROACH HIM!!!


In terms of maps, he is incredibly lethal on Deadly Decadence since Rib Crusher goes through the maze walls, and that map in general is very strong for Power characters thanks to the layout providing many shortcuts and ambush spots. Monkey Business is also a great map for many of the same reasons, the bananas being helpful for him as well, allowing him to catch up. Monstrum Madness is also very good because of steam and the chaos of the super brutes allowing Hangry to kill even faster. Elementary Evil is once more a fantastic map since Hangry can ambush well there, but must be careful of the fake portal whittling him down. Stranger Sewers and Silent Sacrifice, of course, will not be mentioned.


As stated already, Hangry stomps on most Mortals. However, besides the Powers, there’s two that can stand a chance if they react fast enough. Heather is able to survive the attack if she pops Seal of Metatron before the combo finishes, and Cybil is able to cancel Rib Crusher.

Just being a Power class would mean that Hangry remains strong in Shard Mayhem since the class’ entire gimmick is killing stuff in PvP. Hangry certainly fits this, and Rib Crusher remains capable of holding him up in Shard Mayhem as well. The combo he uses in Maze Escape to slaughter most of the roster is also extremely effective here, as it cripples the vast majority of the Monsters in the game. Balanced gets left with 40 health, Powers live on 160, Support lives on 80, and Ranged lives on 200. If you pay attention to this, you may have noticed Speed is absent. Well, fellow viewers, that’s because Hangry is able to one shot every single speed character, making him the hardest counter to all of them at the moment, and as a result, puts out extreme pressure onto them. Since he’s capable of doing so much damage in an instant, engaging against a Hangry is very risky since he can butt smash at a moment’s notice, being able to turn the battle to his favor on a dime, if not outright win. As a result of being able to reliably cripple every Monster that isn’t Ranged, as well as being an extreme threat to shard queens Agatha and Reaper Nurse, as well as Fiend, means Hangry is easily a contender for best Monster in the gamemode overall, being as such in my, as well as many others’ eyes.


Most maps remain the same. While Stranger Sewers and Silent Sacrifice are still his worst maps, his ability to completely flatten the Speeds (who are extremely common on said maps) in an instant allows him to have the distinction of being pretty much the only viable Power class on those maps on Shard Mayhem. Phantom Malak is Phantom Malak, no surprises there.


Hangry’s only real problem matchup is Malak due to the fact that Eye of Suffering outranges him and completely shreds him. You can technically say the same about Golden Demise from Gold Watcher as well, but it doesn’t kill as fast, allowing Hangry time to fight back before he goes down. He performs well against Penny as well if she lacks the range advantage, but cannot catch her without item help otherwise.

Hangry is a much needed addition to the Monster side of Dark Deception: Monsters and Mortals. He is the definition of the archetype, as his sheer strength combined with the power of Rib Crusher allows him to have a stranglehold on the Mortal team while letting him severely cripple most of the Monsters as well. You can pretty much call him a Power class Agatha if you really wanted to. Granted, he has issues catching up to the faster characters, but he can easily ambush due to being the quietest Power class to date, making it easy for him to get around unnoticed. His ability to vibe check the Mortals so freaking well puts them back in check, as the Mortals honestly have begun to catch up to the Monsters in terms of fighting ability, the vast majority just straight up losing to him. Opposing Power classes can stand up to him, but he can even comfortably take them on as well if he knows what he’s doing. Overall, if you LOVE combat and killing stuff quickly, give Hangry a try! I promise you’ll really enjoy him.

Here we come to an end for Dark Deception: Monsters & Mortals Hangry Gameplay Tips hope you enjoy it. If you think we forget something to include or we should make an update to the post let us know via comment, and we will fix it asap! Thanks and have a great day!