How to optimally select for stat growth levels based on a *HIGHLY BIASED* interpretation of how stats affect gameplay.

Crystal Project has a pretty unique and cool stat system in that it allows you to control the stat growth of any of your characters at a very micro level. Want a Reaper with 60 levels of warrior? Maybe a Summoner with 10 levels of Assassin and 50 levels of Mimic. All things are possible.


Each class has its own unique growth pattern. If all stats were equal these would be roughly equivalent to one another in terms of raw value, with each class gaining between 24 and 26 total stats at each level. You can see this growth pattern expressed on the class selection screen via a series of stars next to each stat. 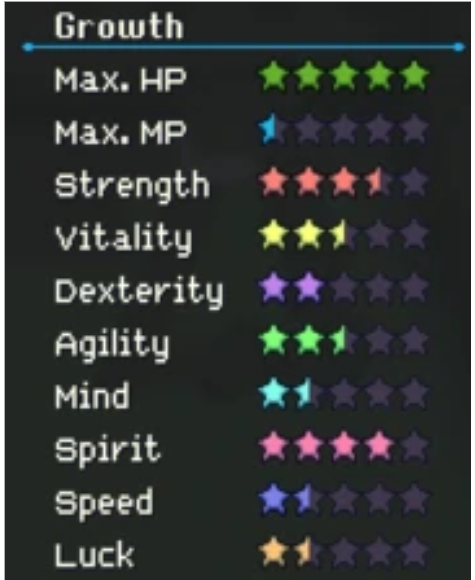 Stats have two functions. First they provide a bonus unique to each stat:

Second they drive class ability damage, with each class using a different core damage stat. There is quite a bit of overlap between these damage stats that can be generalized as:

Each class has its own unique growth pattern and preferred damage stat. You can see these breakdowns in the class stats screen, expressed through a series of stars.

Stat growth can be changed in the capital city just south of the Gaea Temple, in the leftmost building in the middle city tier 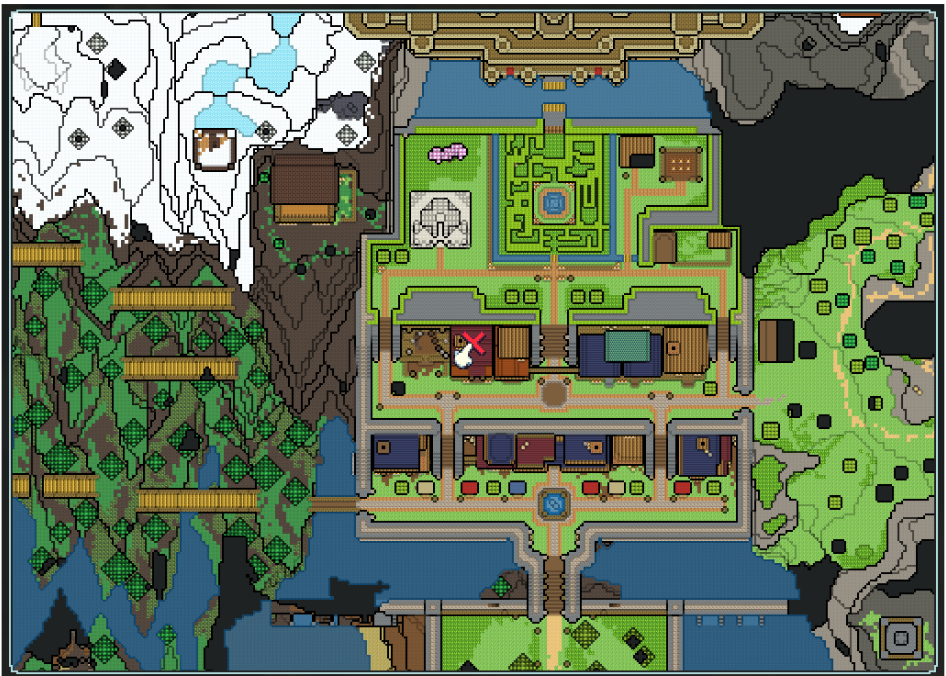 Cost scales based on the number of level conversions being purchased, but in general you can expect to spent about 7.5G for 60 levels in a single class.

Stats are not off equal value. The impact of increased base HP, base damage or TT reduction when compared to something secondary like defense pierce is pretty huge. This gives us a pretty solid starting point that we can use to drive stat growth decisions.


The complexity of this system, with different classes getting different amounts of stat but assignable in any quantity to a character regardless of their leveling experience, has led me to the conclusion that the best approach to optimizing growth revolves around managing a series of priorities. The rest of this guide is going to be about around narrowing in on the specifics of this strategy.

HP growth loses a fair amount of value in the late game due to a few factors:

Because of this I personally believe the best stat growth pattern selects for HP growth only up until a certain point. How you define that point will vary based on your own personal risk preference, but I tend to try to ensure every character can survive one boss AoE without consuming their survival passives. I generally use 1.1k HP as a hallmark for this, but it is dependent on having end-game gear so you may need to adjust your targets accordingly. It is also worth noting that most plate wearers will have HP available on their BiS gear items, which further lessens the value of HP via stat growth.


MP Growth patterns are pretty similar in principle, with the summoner as a notable standout. (Summoners tend to focus much more single mindedly on MP due to the singularly powerful, consumable and non-scaling nature of their spells).

Looking at the description for stats, you might think that “defense multipliers against static pierce!? I can be immortal!,” I know I did. Defense as an archetype, however, relies pretty heavily on the dominance of the holy trinity (Tank/Healer/DPS) and therefore on the power of threat management.


We have the tools to manage threat, but the frequency and frank brutality of boss magic AoE’s sort of breaks the rest of the strategy. Having a tank maintain threat becomes pointless pretty quickly when the crew dies every other turn to area attacks. It is even further trivialized by how poor resistance gear is for tanks – you will find that it’s not ‘everyone but the tank’ who dies to boss aoe, but just everyone.


For this reason I have heavily de-prioritized mitigation stats and prioritized in their place raw HP. This is both more universal (eg doesn’t require an equip passive to utilize well) and has a better synergy with the variety of survive-one-hit passives and auto-res buffs.

Adding Dex to a class that doesn’t gain base damage through it, but is still inherently physical, will still benefit from the additional crit chance and damage. Upon analysis, however, the total value gained is pretty unimpressive. Though the actual damage contribution per dex changes slightly depending on your total dex, it averages out at about 1 bonus damage for every 9 dex. It’s not negligable, but it’s not worth investing in.


For classes that do use Dex as a base damage stat (Assassin, Fencer, Rogue, etc), the additional factor of Crit more than doubles the relative value of adding Dex over any other stat. This simply reinforces the rest of the advice here. 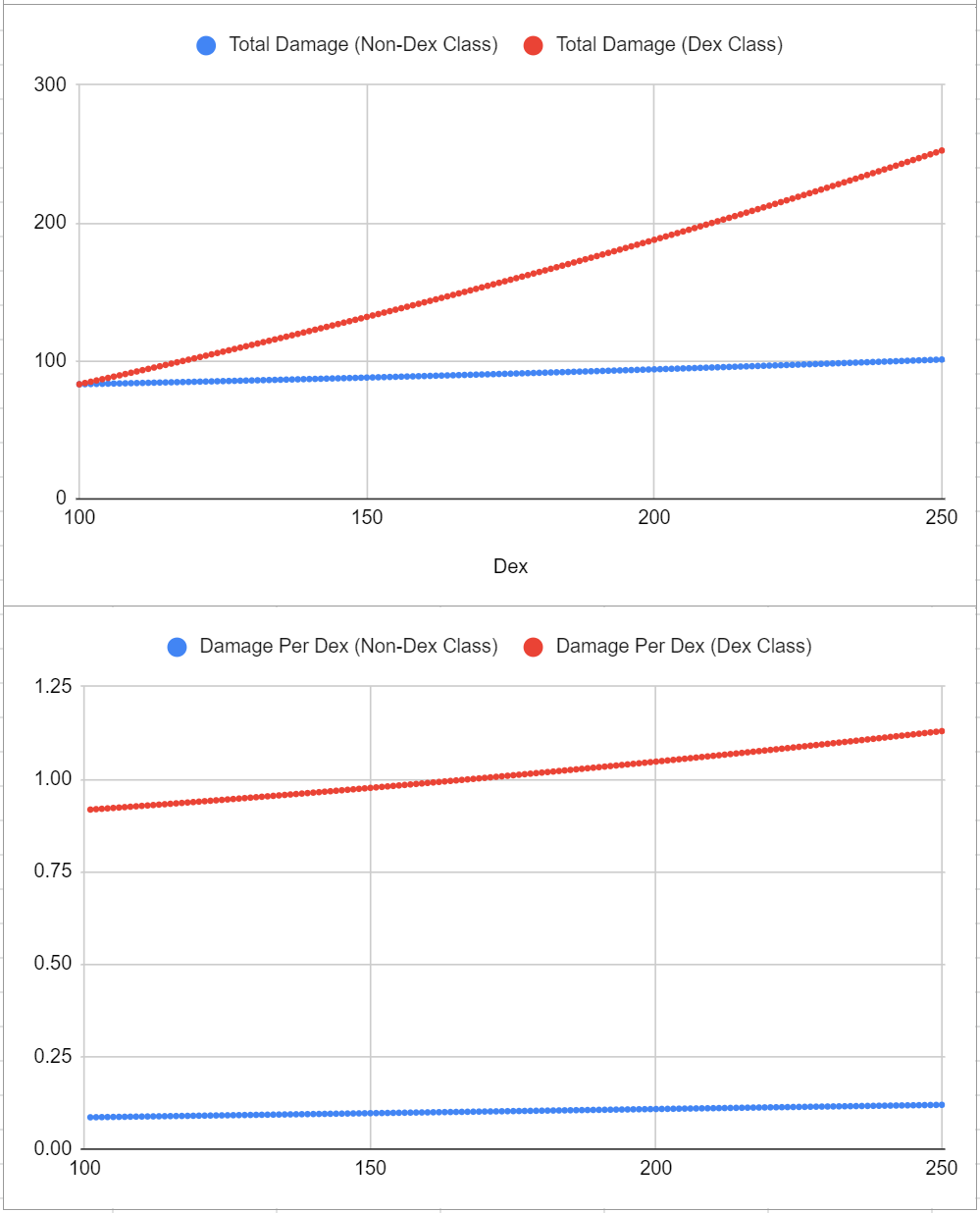 Speed is an interesting stat. Increasing the speed of a character reduces it turn timer, which influences both the order and number of actions in a combat. On paper it is the most egregiously overpowered stat in the game. However, the relationship between TT and speed is lossy; the more speed you have, the more it takes to change the turn timer. Or, to put it a different way, the more speed you have the less valuable getting more of it is. Compared to something static in value like base damage, this points us in a pretty clear direction for stat growth: Identify the saddle point in speed growth curve, get that much speed and then stop. 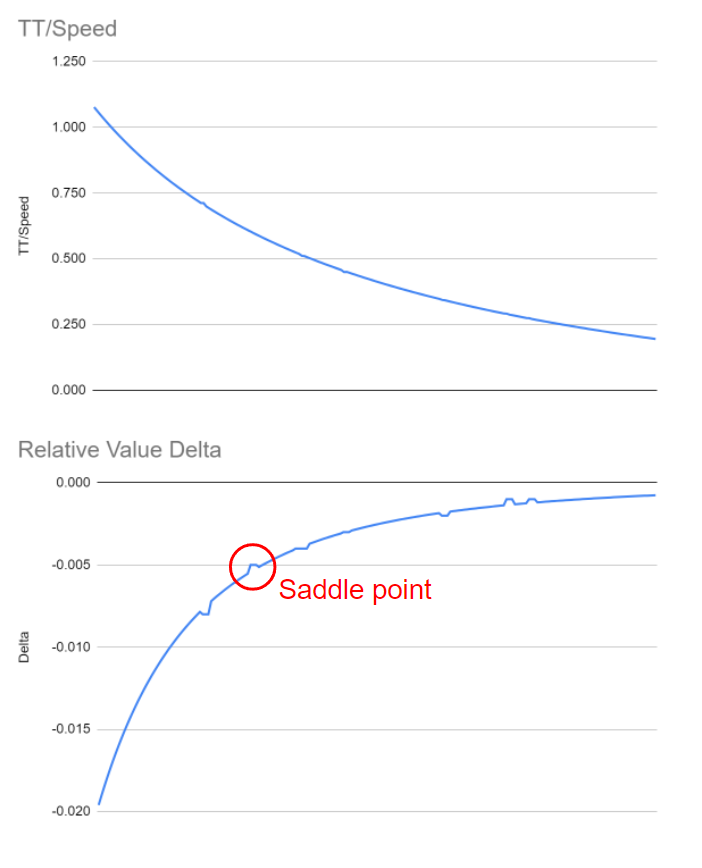 If you zoom in far enough on the delta between these relative value changes, it appears as if the saddle point sits around the 0.33 reduction per stat, or at 160-165 Speed.


***NOTE*** This kind of flies in the face of conventional wisdom on the game, and 165 speed is absolutely trivial to hit. If you are using a class that has any of amount of inherent speed you likely won’t have to pay attention to the stat at all. If turn order (rather than turn efficiency / action count) really matters to your comp (Hello Dream Hunters & Coup De Grace debuffers), you will need to take the time to find the average speed of bosses you face and then make sure you are above that when setting your speed target.

This now leaves us with a refined priority list.

Putting it all together

So at this point we have a series of goals / priorities, and an understanding of how much of any given stat a level in a class produces. The process now becomes about identifying classes which produce the maximum number of stats that fall into our prioritization, and ignoring all other stats. Google sheets makes quick work of questions like this. Let’s run through an example.


Imagine we are building a Reaper DPS unit. Reapers use Strength as a primary damage stat and don’t use MP beyond a few infrequently used buffs, so we can say the stats that matter are: HP, Str, and Speed. If you add the stat per level contribution of the classes again, after culling the irrelevant, you can see that until your priorities shift, levels in Beatsmith are the most efficient. 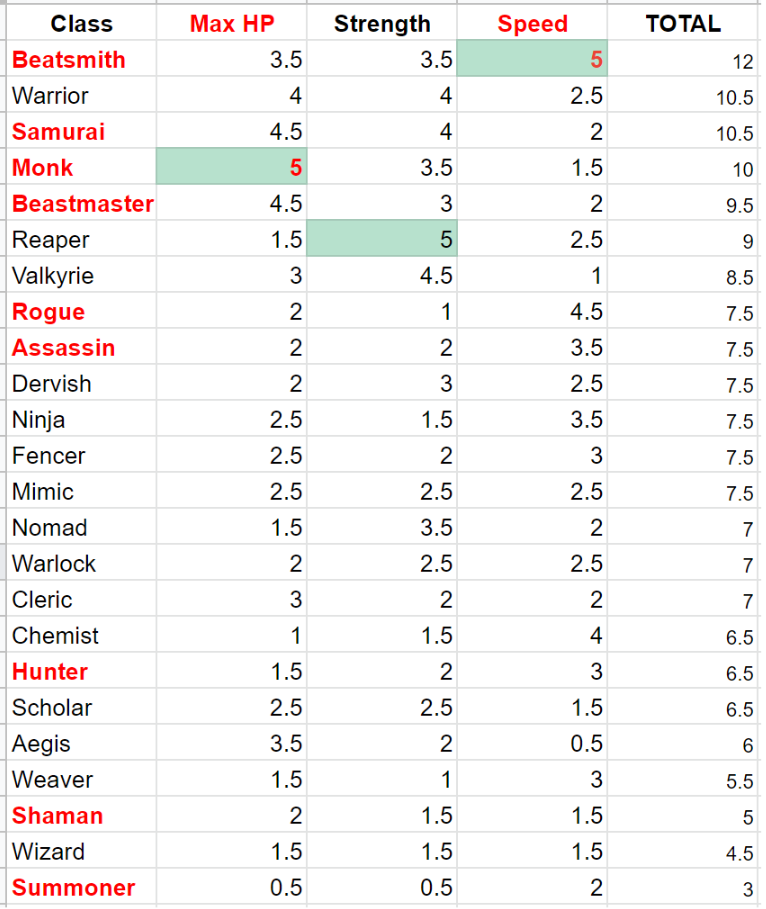 Once the first stat priority goal has been achieved (Speed >= 165), we can cull that stat from the evaluation and re-assess the total contribution from each class. Thus, our next class would be Samurai. 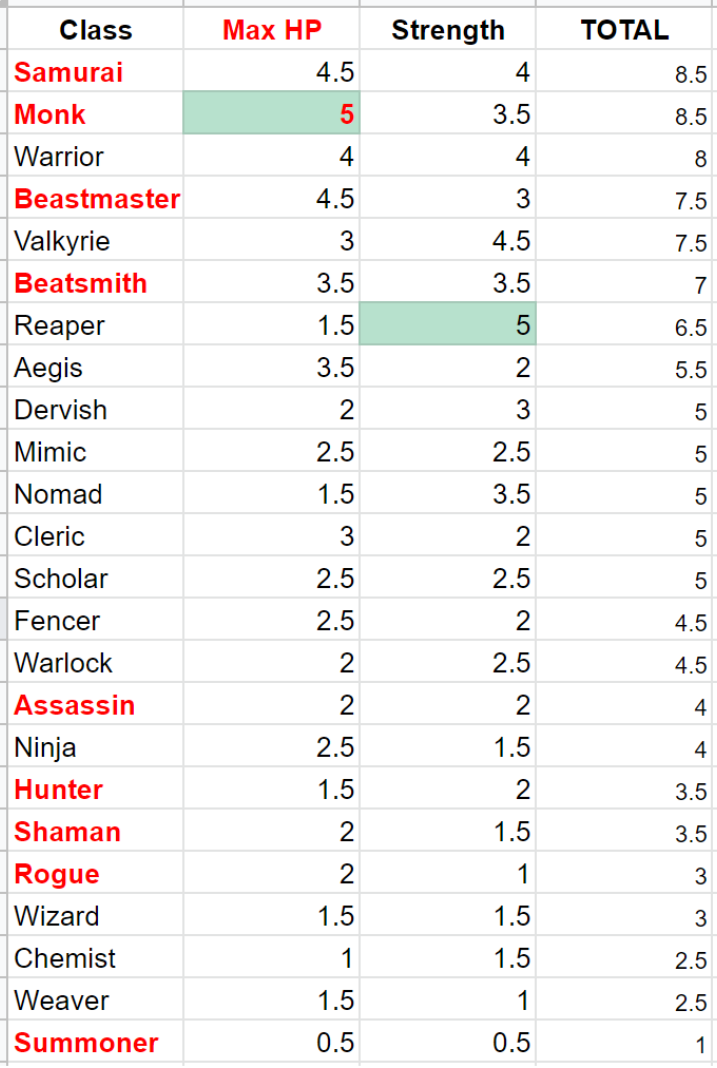 Finally, once both the HP and Speed goals have been met, Reaper, with 5 Str per level, should finish out the path.


I made a janky tool for myself when going through this process. Anyone who is interested is welcome to make their own copy of it from here: https://docs.google.com/spreadsheets/d/1D1rI_oXStA4aylZ2Xf2Z4KhCLA779EylNpbcYlJO8ik – [google.com]

Hope you enjoy the post for Crystal Project Optimal Stat Growth Guide, If you think we should update the post or something is wrong please let us know via comment and we will fix it how fast as possible! Thank you and have a great day!