Use the Hive Mother to farm your Vitality, Ranged, and Combat Experience from 0-100, semi-afk!

My name is Kite, and I’ve been trying to max out every single stat in Core Keeper, since I’m working on a bunch of dares from the devs. To that end, I’ve figured out the best way to farm Vitality, Melee, and Ranged EXP.


Here is the full guide in video format. I recomend watching over reading.

This is rather simple, but requires some base knowledge. First of which is how the EXP system works. Vitality EXP gain is based off kills, while Melee and Ranged EXP is based on HITS. This means that you want to use a weapon with the lowest damage, but highest attack speed. To this end, I recommend resetting your skills so that you take the entry level attack speed perks, but ignore everything else. 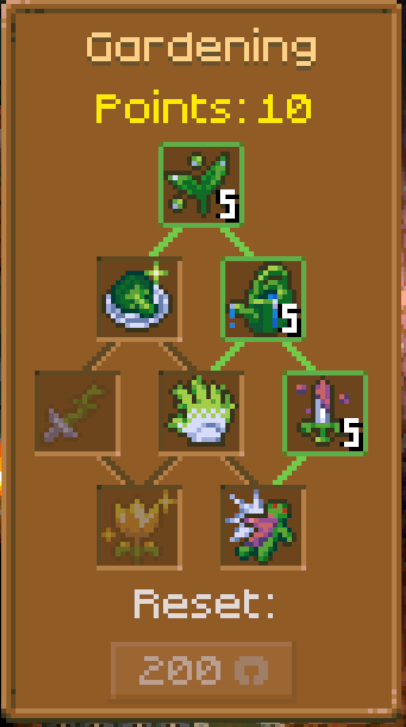 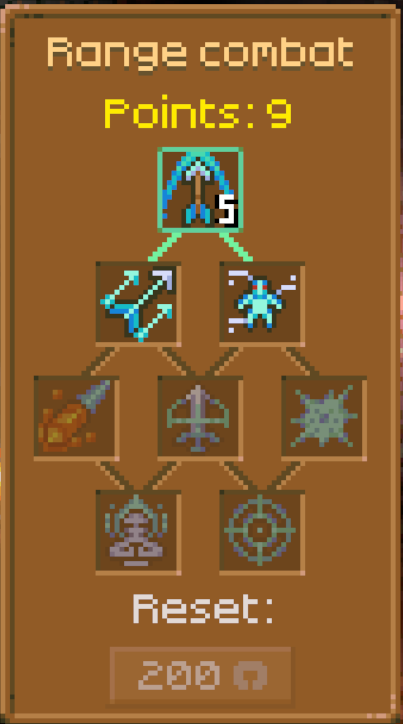 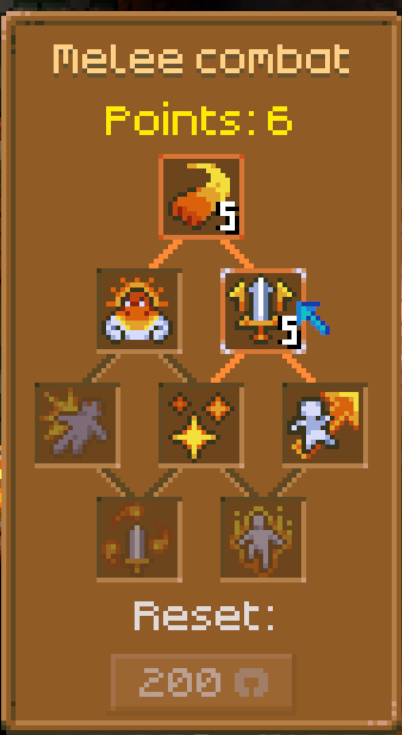 Why not endurance runner? We will be abusing starvation, explained in detail later. We want to do the least ammount of damage, after all.

Why not Fast and Furious? It’s bugged and doesn’t work with our weapons of choice, the shovel and your fists. The flurry ability procs but it’s broken for unarmed and shovels, so ignore it. It would have made this way less terrible, but that’s ok, suffering builds character. And grinding in this game is suffering. Just look at my 36 hour farming timelapse that I’ll be uploading soon. For real. Please fix this, devs. Take it at 5/5 when it’s done.

Why poison? Poison just seems to make grinding faster. It’s a strange interaction that I haven’t figured out just yet.


Keep in mind that the Hive Mother cannot target you beyond 14 squares, which we will be abusing, and the fight will reset after a short period of time at around 20ish squares away, which is also amusible. This gives you a lot of control in this fight. See the video for more details. 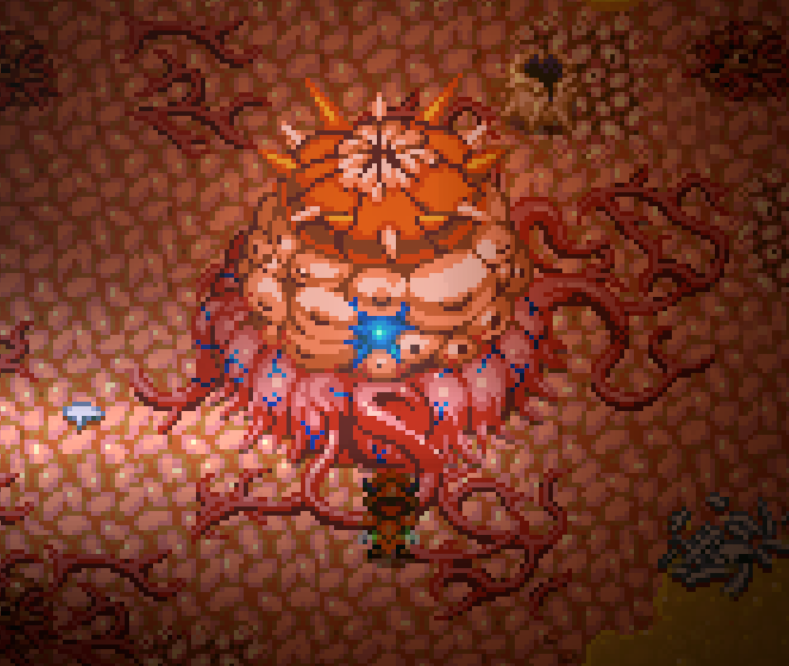 Now, notice that you can just walk up to the Hive Queen. Use this to your advantage to use your shovel to create your ancient training arena. You will be able to dig around, but not inside the arena.

Monsters spawn in 4 nodes around the boss. We’ll show off how to encourage these bugs to become your training partners later.


I’ve provided my blueprint in the linked video, and I’m sure you can optimize it further. It’s the concept that counts here, there are no points for these acetic aesthetics.

Having a bridge like this allows up to focus and funnel enemies in a convenient bug corrale, allowing either your shovel, fists, grubzooka, or other ranged weapon to easily spar with your buggy buddies.

Keep in mind that the Hive Mother cannot target you beyond 14 squares, which we will be abusing, and the fight will reset after a short period of time at around 20ish squares away, which is also amusible. This gives you a lot of control in this fight. 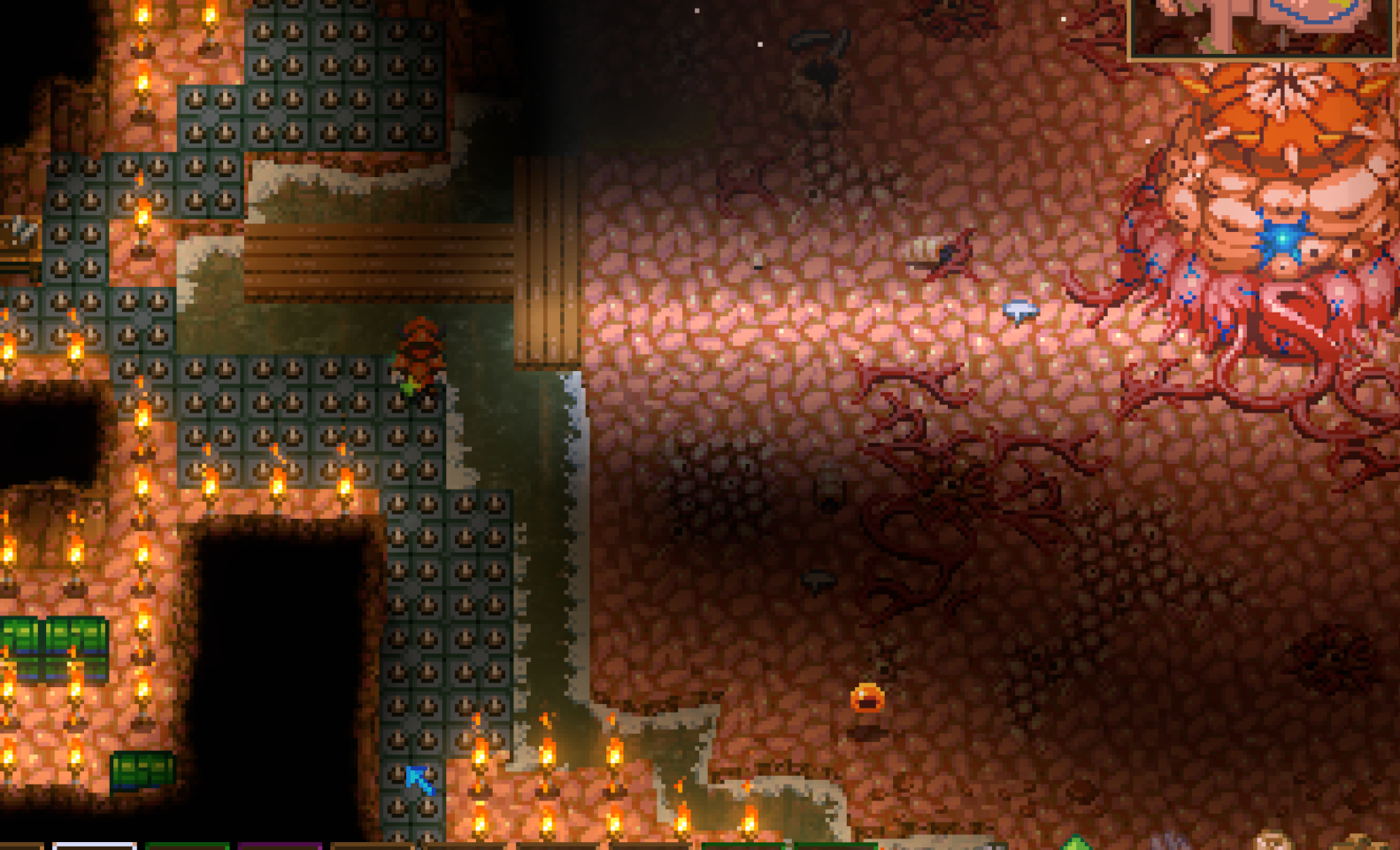 Before we can begin or path to enlightenment, we must be the one to first cast the first stone.


Tin, also known as Dragonforce, is the strongest metal known to man. It is acid proof, corosion proof, and only your fists or a wooden shovel can dismantle it. So don’t accidentally hit it or you will be digested alive like in a weird furry doujin when the artillery creates acid pools.

Torches also work and will prevent acid from spawning, but spikes are more aesthetic, and will save your life in case an enemy teleports into you. See video for examples.

The humble wood shovel is the perfect tool to also fix any unhappy, unintentional mistakes that will cause you to be prematurely digested. Simply dig up any acid and reset the fight if you need to. Make sure you have a broken one, as well as a fixed one. This is important.

Use the wood shovel until it breaks, as prolonged spanking your enemies causes emotional damage, which gets you combat exp faster than simply killing your enemies.

When your holy yoai paddle breaks, you unlock your ultimate skill: fist. You no longer are at risk of accidentally removing your anti-digestion panels


Why unarmed? It has a similar range to a shovel, but does the least amount of damage.

Then, to order to surpass your mortal limits, you must feel the worm. That is the truth of kung fu.

Martial Arts, hand to hand combat. The only way to get enlightingment.


Why do we do this? Remember, Range and Combat EXP is based on hits, not damage or kills. You want the highest attack speed, but the lowest possible damage so that you can slap those bug bottoms for as long as possible.


But first, In order to find your center and embrace total Enlighted ultimate Kung Fu, you must first engage in ritualistic fasting. Like all zen pursuits, it will involve overcoming starvation and suffering. Complaining will not make the pain go away, but your character will do it anyway pretty often.

There isn’t any DoorDash down here, the only satisfaction you’ll be getting is from the crazy EXP you’ll get down at the Grub Hub.

If you’ve watched the video/read the guide, the next step is obvious. Kite enemies down the aggro path to the bridge, and hit them with unarmed/ranged. There you go. Now do this for 20 hours to get from 0-100 in Vitality, Ranged, and Melee!

And finally, some tips.


-Waves of small maggots are perfect to kill with your fists for maximum exp procs.


-Big maggot waves and explodey boys should be destroyed via range or the Grubzooka for the vitality exp ASAP. For some reason the blowpipe seemed to give me more exp, and I theorize it’s because of poison procs.


-Having multiple shovels will swap to a fresh one. Make sure you are aware of this.


-By equipping two clout rings, found in this biome, you can also regain any lost clout from being hit by any errant goo.

That, and if you do get two you can make sure all your numbers are 1s, 0s, 6s, and 9s, like some sort of proctology exam fisticuff robot, as shown in my video (hint hint).

And there you go. You can farm this all day as long as you leash enemies from the other side of the arena. I’ve been grinding this for the last 20 hours and I’m only at like 80. Please, send help.

Hope you enjoy the post for Core Keeper How to Use Hive Mother for Farming Vitality-Ranged & Combat Experience from 0-100, If you think we should update the post or something is wrong please let us know via comment and we will fix it how fast as possible! Thank you and have a great day!