Welcome to this achievement guide for Cards and Castles! This guide is 6 years overdue but honestly, the game was an enjoyable 100% despite being past its prime in terms of the player population. It’s still quite possible to get your games in during peak hours to complete all achievements.

Getting the 100% on this game will take about 20-25 hours based on skill and card pack RNG. I completed all achievements shortly after hitting level 20 and the only mildly challenging achievement requires you to win 3 battles in Draft mode. Everything else just requires a bit of diligence in completing dailies to buy some card packs. There’s no need to spend money.

To unlock a faction, simply beat it once in Practice mode. 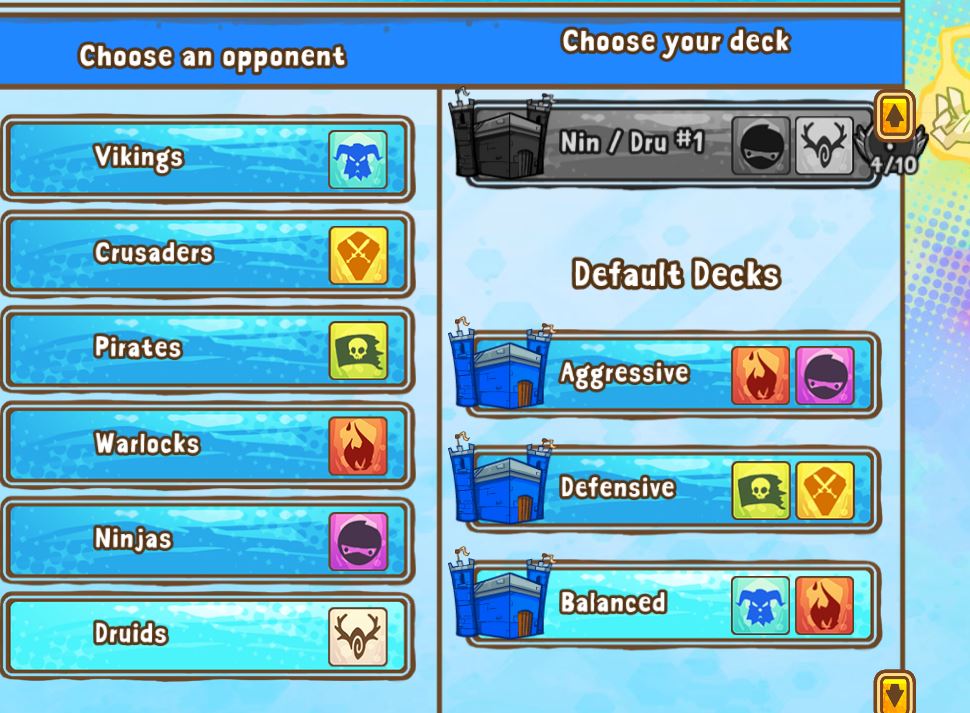 If At First You Don’t Succeed…

You Are the Champion, My Friend

Deal 10 or more damage in a single attack.

Easily obtained when using high attack units in conjunction with attack-boosting cards such as Ludicrous Strength (+3/+3) and Sharpen Sword (+3/+0). These cards can stack multiple times and are permanent until death or debuff.

Cumulative across all game modes.

Win 3 or more matches in a single draft.

This is the only skill-based achievement in the game. It requires a combination of a well-drafted deck and enough skill to win with that deck 3 times. 3 losses will end the current drafted deck, but you can keep drafting new decks for as long as the draft event is going (usually on weekend). The card draft selection is at the mercy of RNG but you can offset this by forfeiting that deck (right beside your win/loss bar) and drafting again. I suggest selecting faction(s) that you are familiar with for drafting unless you are subject to Rainbow Draft (mixture of all 6 factions). If you want inpiration on how to build better decks, visit cards.tv via the main menu to replay matches between top-tier players. 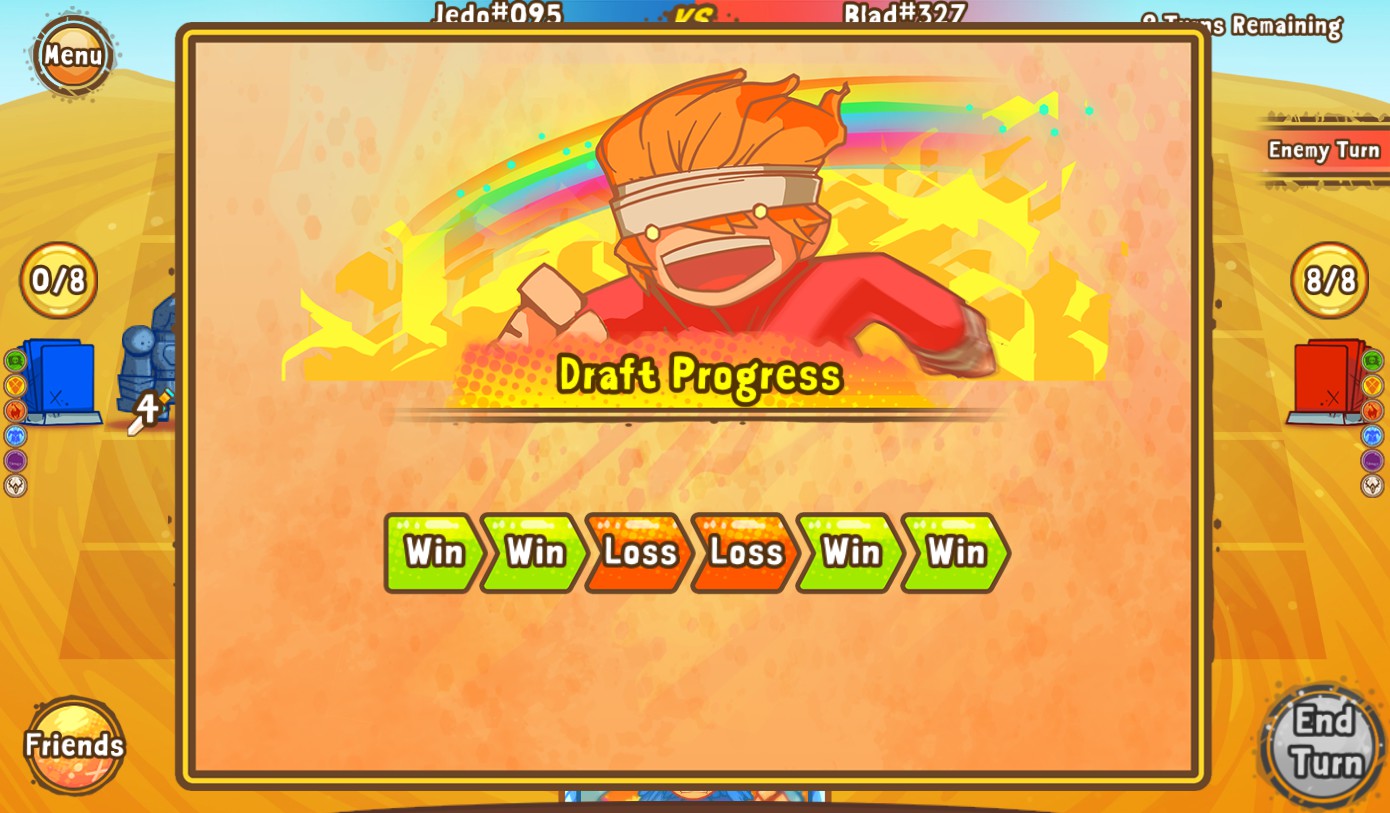 Win a game with only 1 health left on your castle.

This is very easy to rig in Practice mode. Just allow your castle to get hit by an enemy unit, camp the AI spawn until your castle is reduced to 1 HP, and then finish the job. 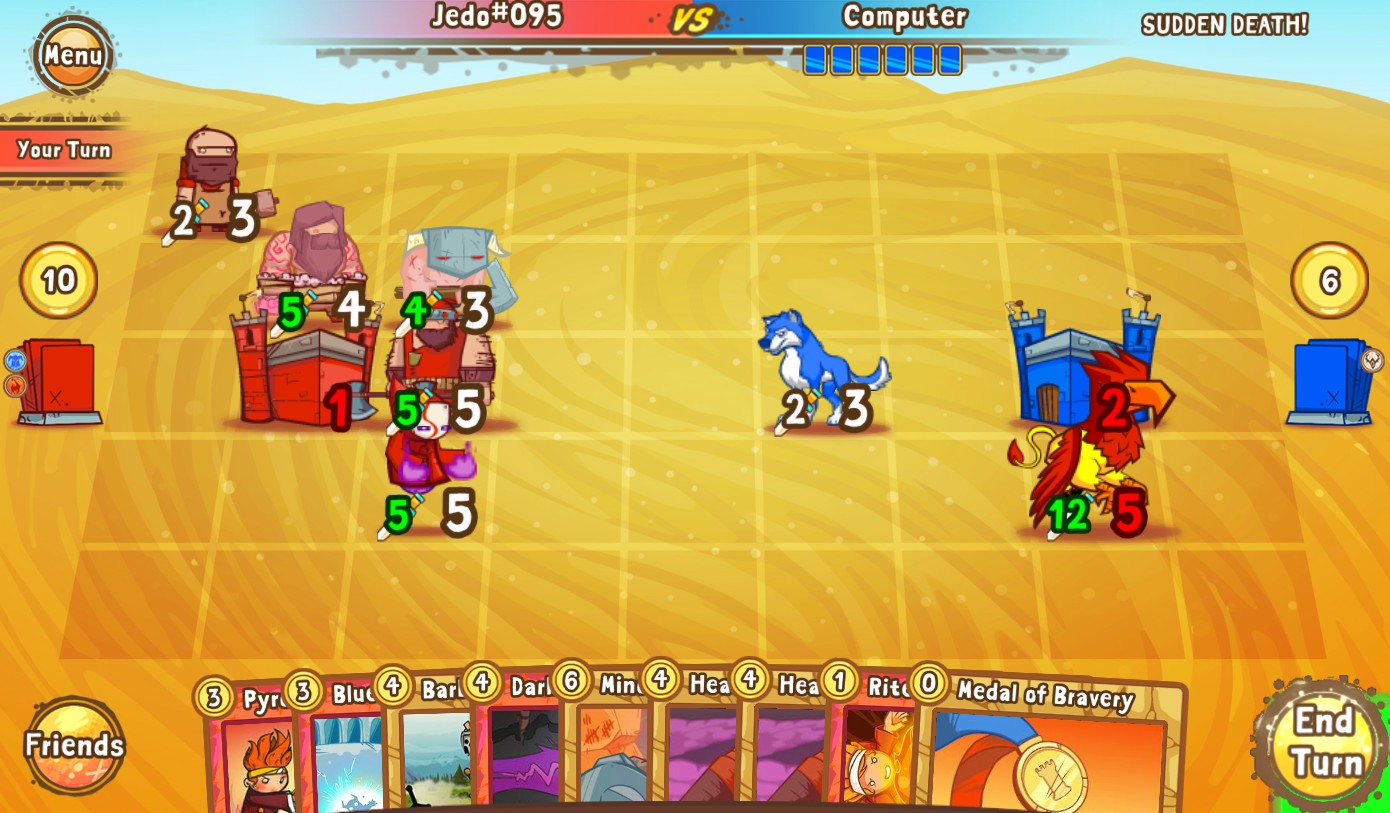 If you want extra insurance, create a custom deck with the card ‘Defective Flamecannon’ to adjust your castle HP accordingly. 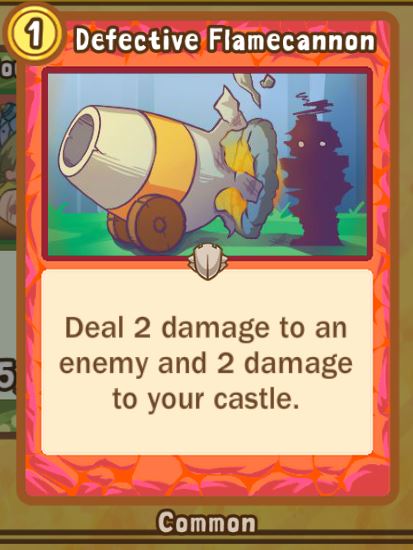 Destroy the enemy castle while the opponent has no units in play.

You will get this achievement through the course of regular play but it’s definitely much easier in Practice mode since the AI is predictable.

End a turn with at least 6 buildings in play.

This achievement is also more practical in Practice mode since building-based decks require at least some synergy to utilize effectively in actual battles. Cheap buildings are recommended such as Sushi Shacks, Pillars of Annoyance, and Breweries.

Crafting and Disenchanting (breaking down a card into crystals) can both be done under the My Cards menu via the crafting button. The cheapest card to craft costs 40 crystal. Disenchanting these cheap cards is generally very inefficient since you only get 1/8 of their value as opposed to disenchanting high-value cards that can give 1/5 or 1/4 their value in crystals. You will need a minimum 2000 crystals to craft 50 cards for the achievement. Since you need these cards to have an easier time winning battles, leave the crafting achievements until you have completed every other achievement.

Let There Be Card!

On top of completing the tutorial which gives you a huge chunk of card packs. There are 4 ways of accumulating cards — and subsequently legendary cards:

You don’t need to spend money in this game to get the 100%. Just do about 2 weeks’ worth of dailies as you save for the 1-time purchase (beginner) silver pack and any 100 silver packs afterward. 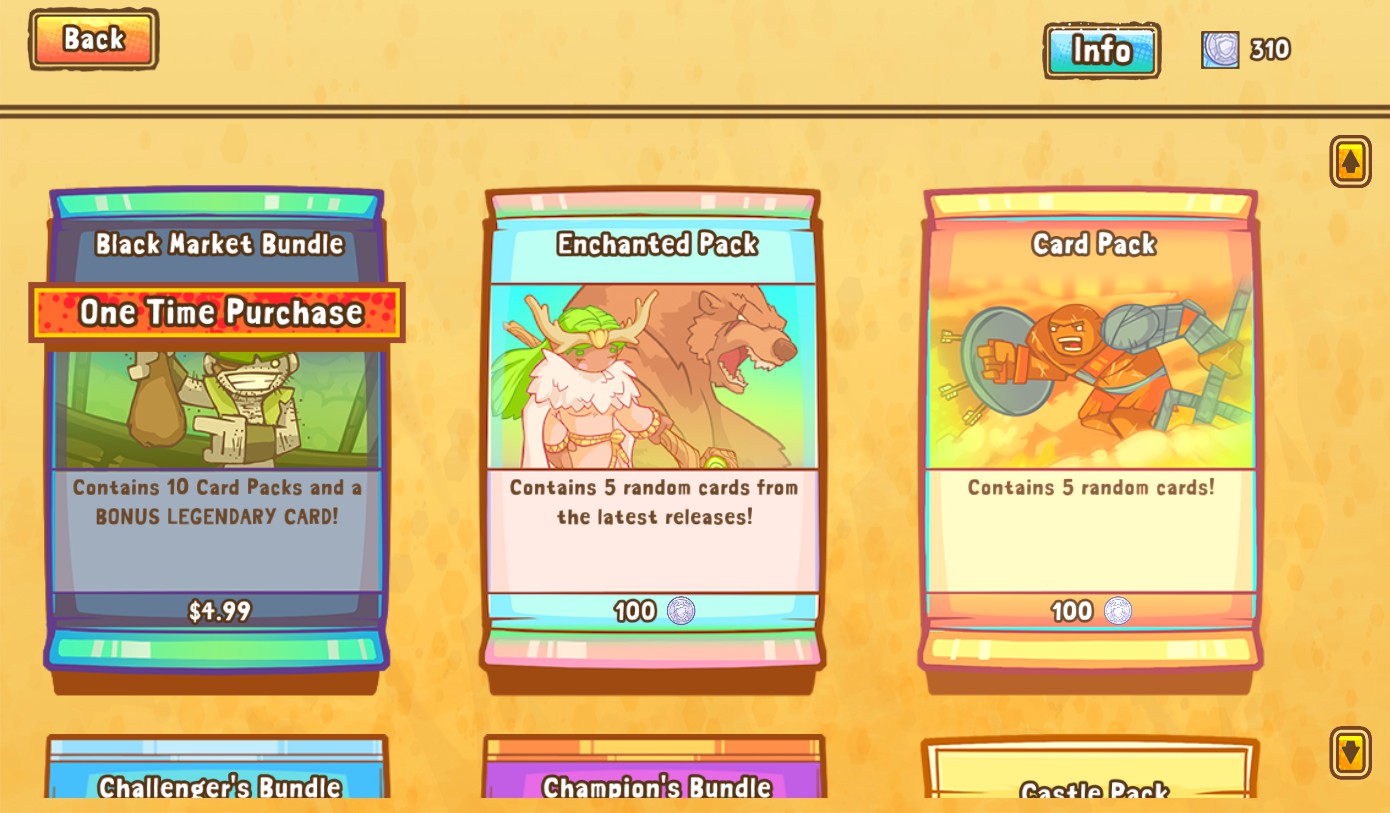 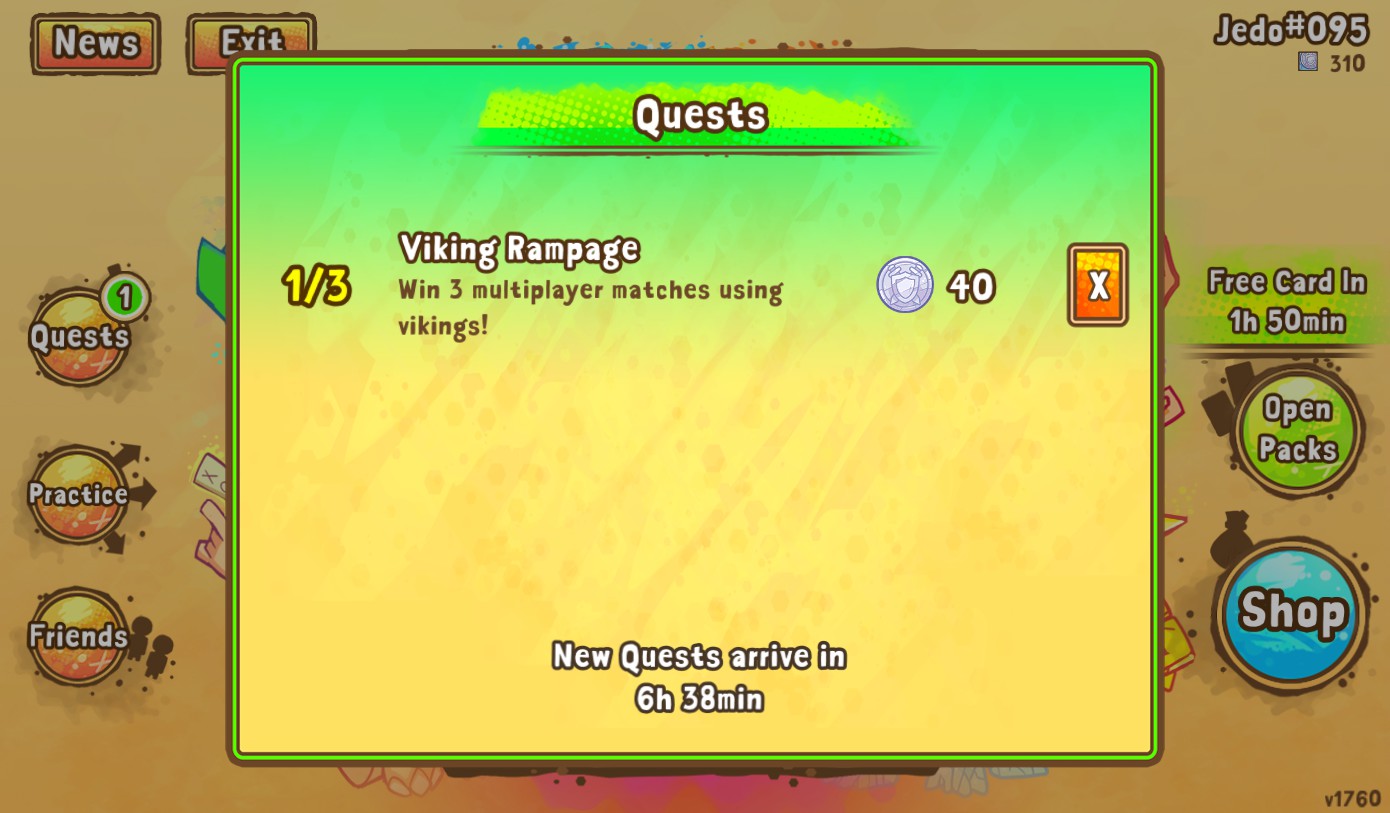 Collect at least one legendary card!

This is all for Cards and Castles Achievement Guide & Crafting hope you enjoy the post. If you believe we forget or we should update the post please let us know via comment, we will try our best to fix how fast is possible! Have a great day!