R’lyehian, also known as Cthuvian, is a fictional language created by H.P. Lovecraft that exists within the Cthulhu Mythos.

In the game, many occult objects bear some form of R’lyehian inscription but have no translation.


Here you will find a comprehensive list of all uses of the R’lyehian font and their translations, provided by yours truly.


I do not claim the translations to be 100% accurate, as some texts, like the books, for example, are exceedingly difficult to make out and some of the texts seem to be just gibberish. 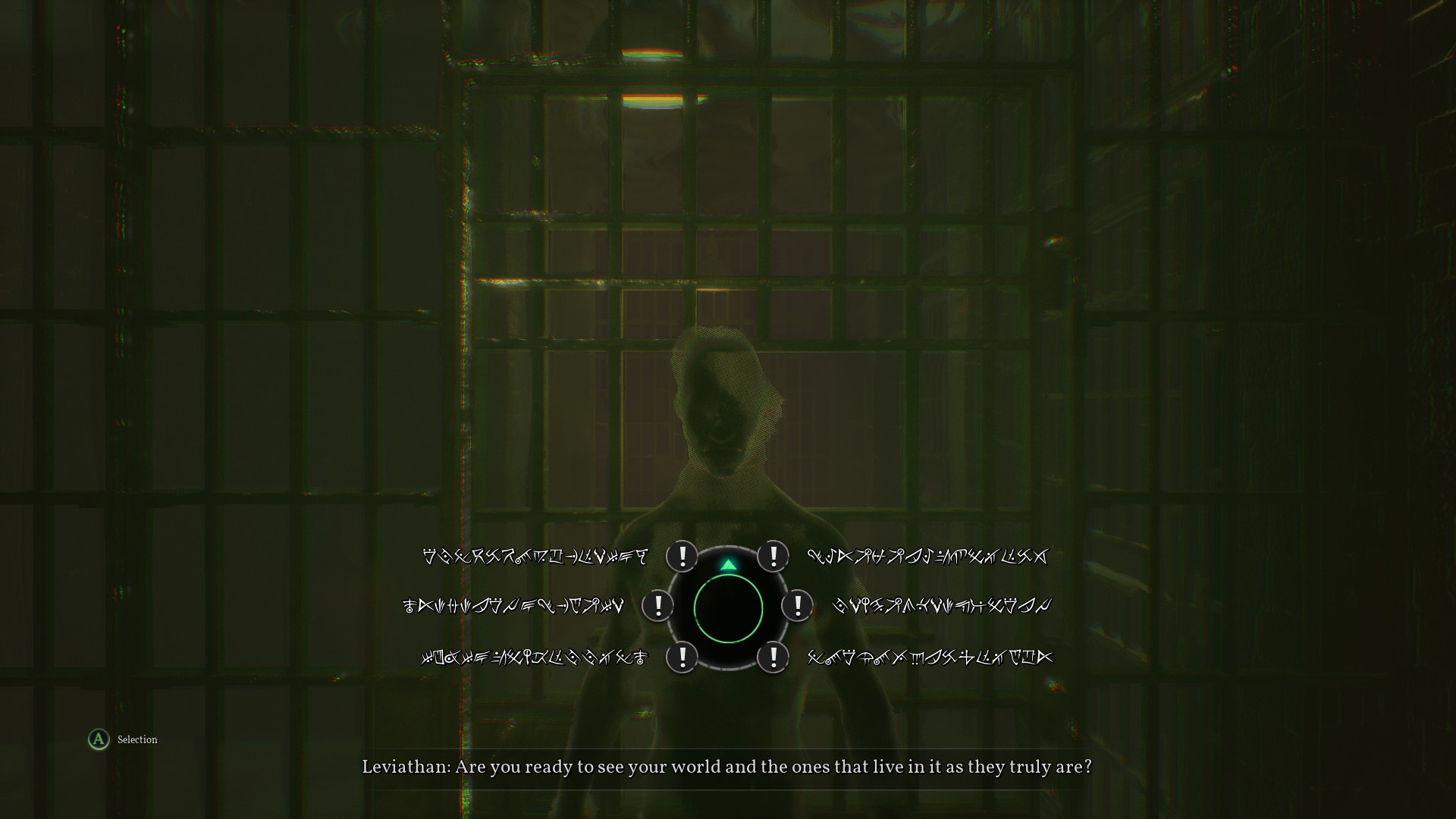 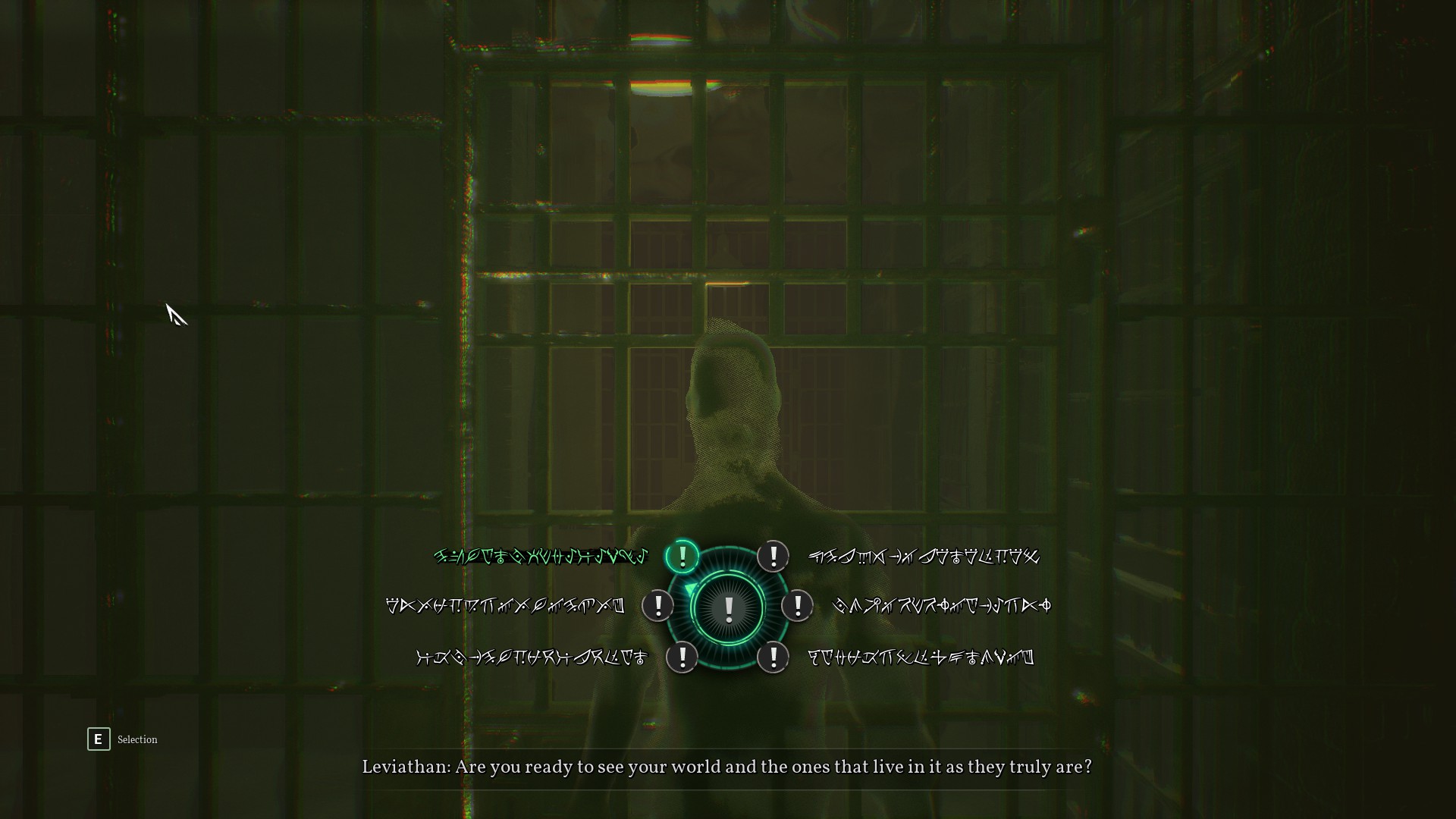 Every option you are given within a dialog is randomly generated gibberish. The top left option in the first screenshot, for example, spells:


The decision to not include the actual text here might make sense as the responses of the other characters usually imply them hearing something else than what you are “saying” – meaning you aren’t actually answering them in R’lyehian. This would be in line with Pierce not knowing R’lyehian either, and it being an expression of his loss of sanity. 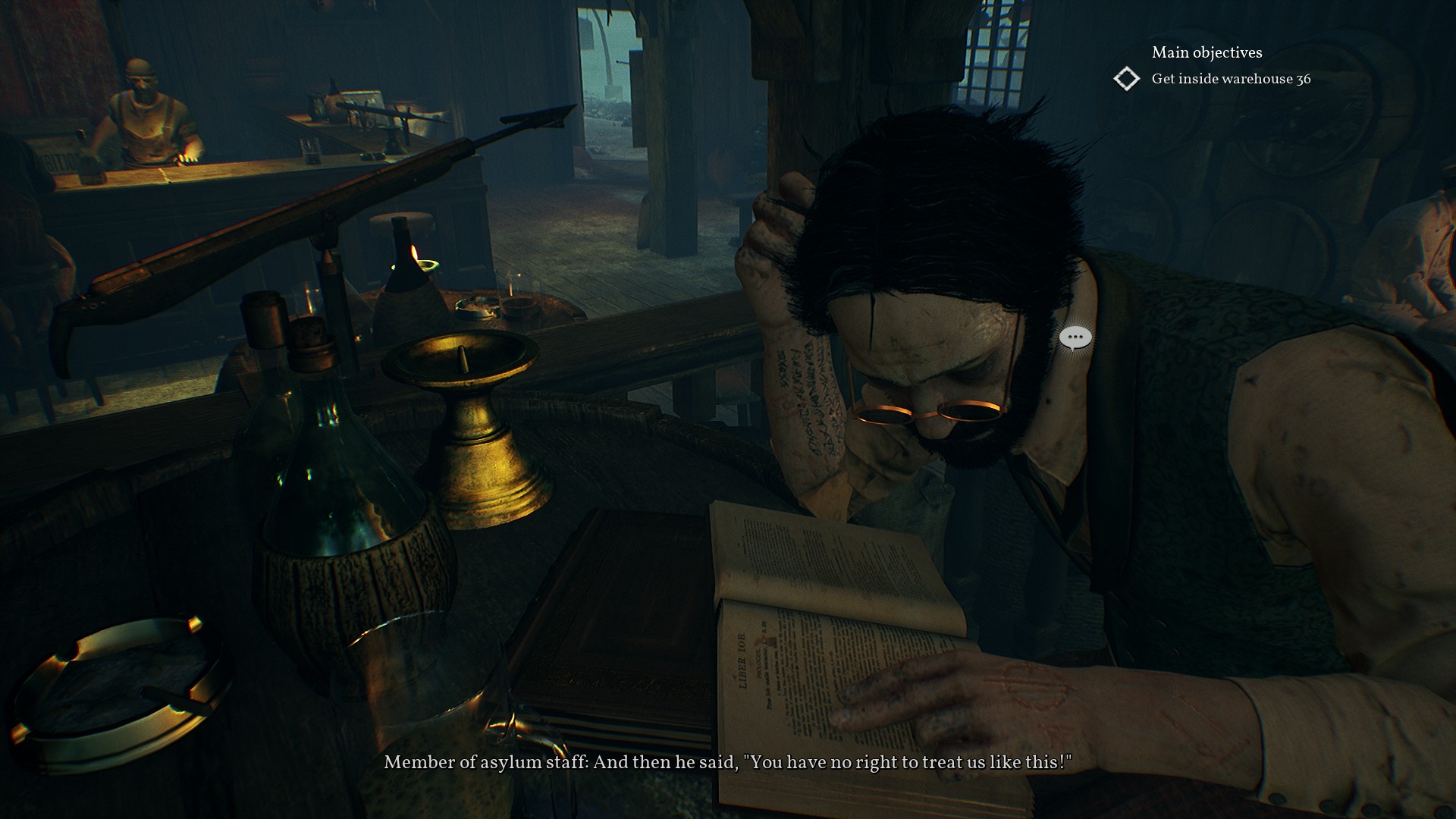 Unfortunately, this is also gibberish. The few letters I could make out spell:


A shame, considering this might be a great way to implement a “cheat-sheet” into his character design for the climactic recital at the end of the game. 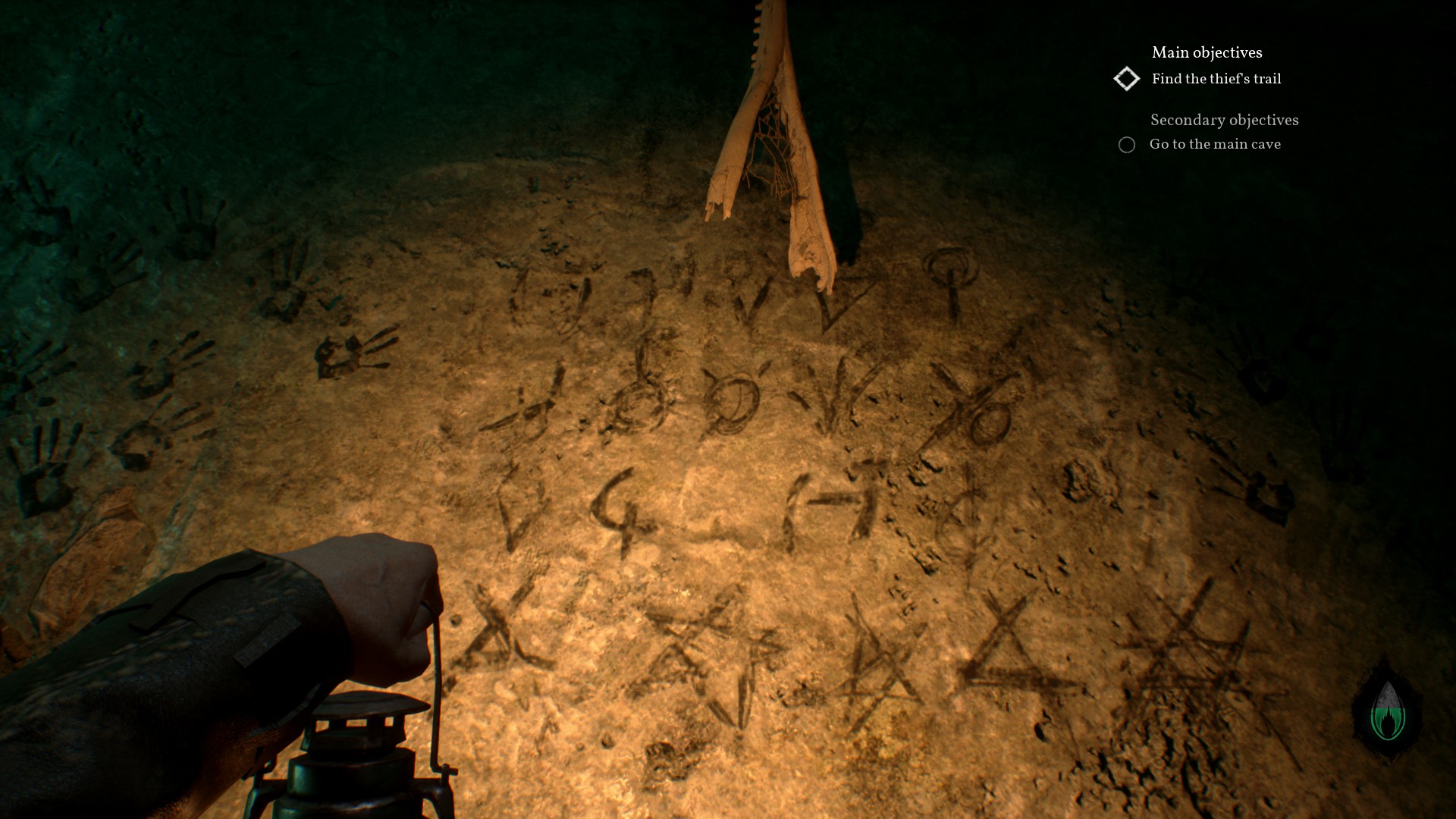 These are nothing but single letters and don’t mean anything.

Circle in the art room 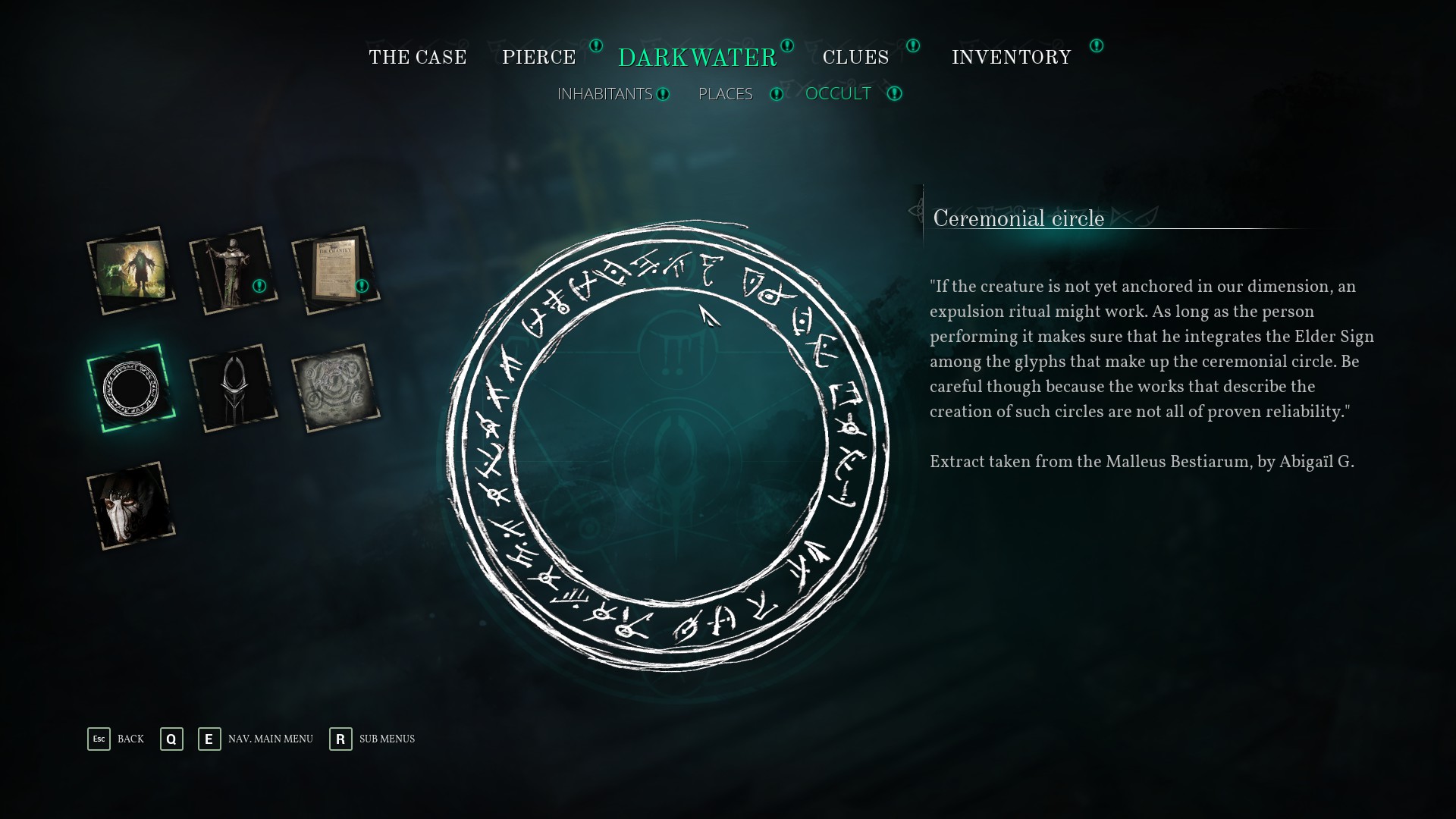 When translated, this text gives away that it’s not a summoning circle, but a banishment circle:

“As Iam defenseless against Evil help” 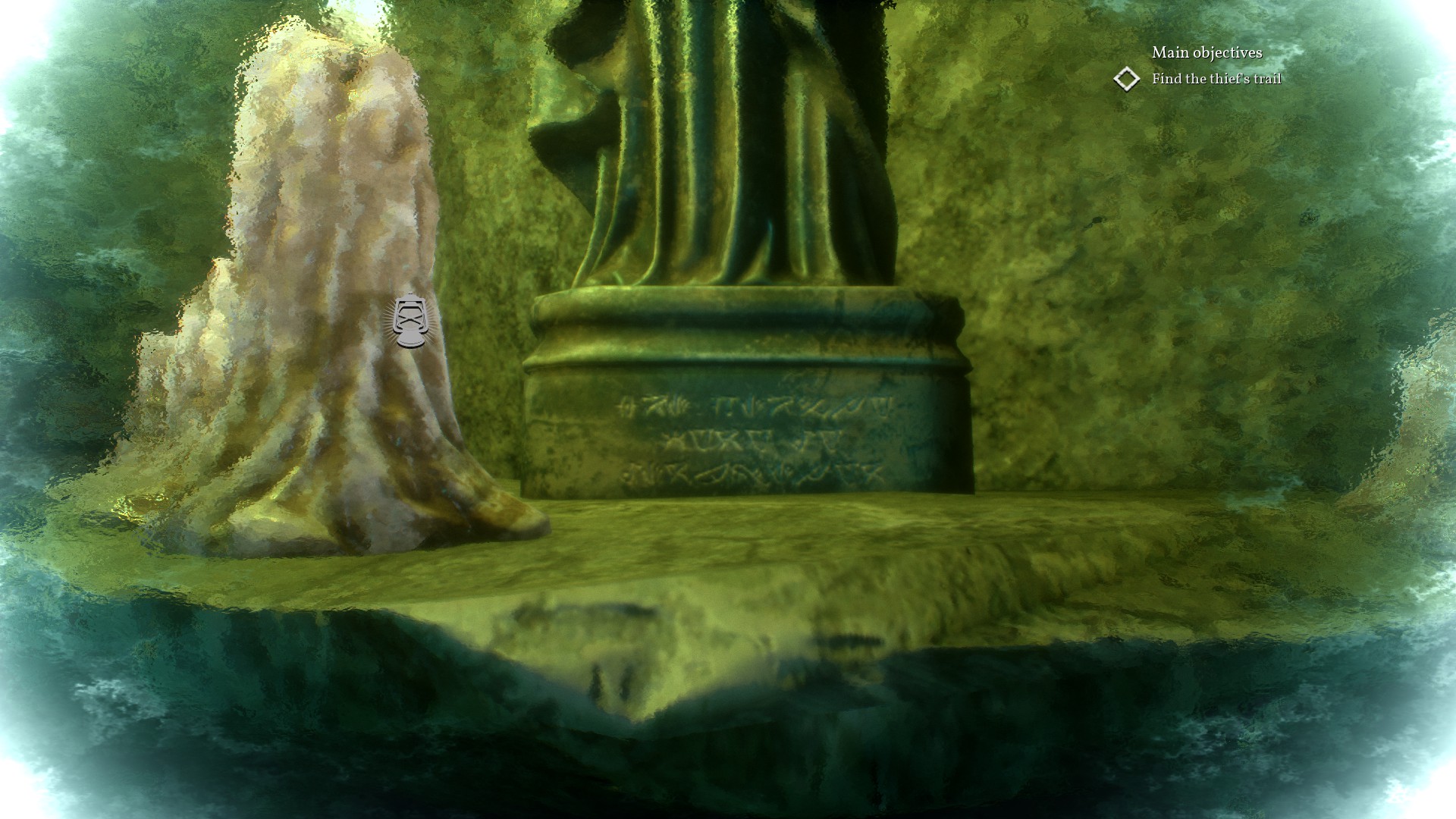 There are two Cthulhu idols in the game, one in a cave under the mansion, the other in the art gallery of Francis Sanders.

Both have a short text written on the base reading:


Which is French, but there’s an… issue. There is an actual “Saint Pia” in history, but her being referenced makes little sense in this context. “Mere de Darkwater” means “Mother of Darkwater”. A possible, if questionable, reading is “Pia / Sainte – Mere de”. Pia Mater (mother) is the innermost membrane enveloping the brain and spinal cord. This would be a double-take of “Holy mother of” and “Pia Mater of” which makes sense in that Cthulhu is both a holy figure on the island and an influence on the residents’ brains. 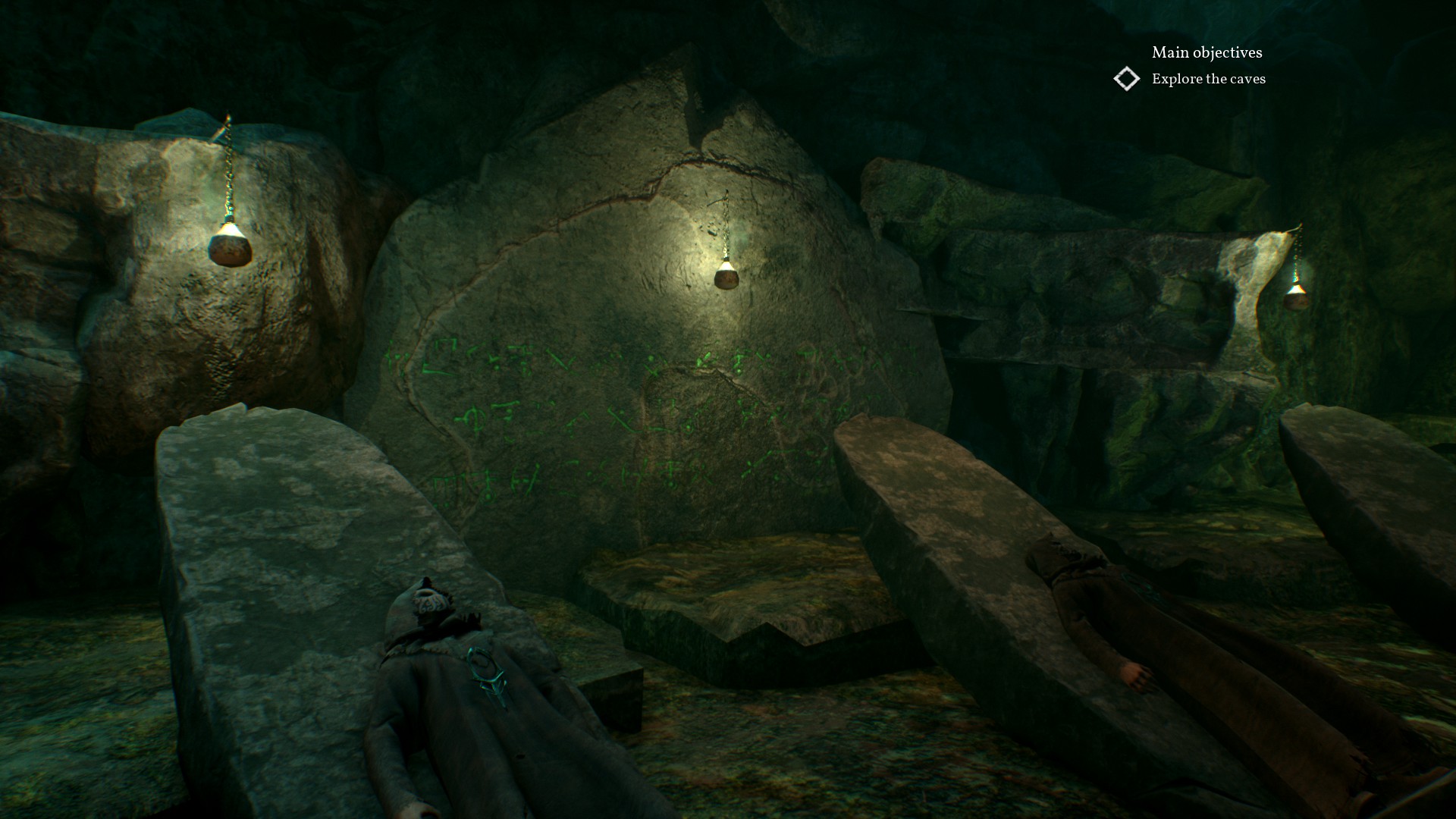 
From the Call of Cthulhu story by Lovecraft: “In his house at R’lyeh dead Cthulhu waits dreaming.”

Altars with the carved whale tooth 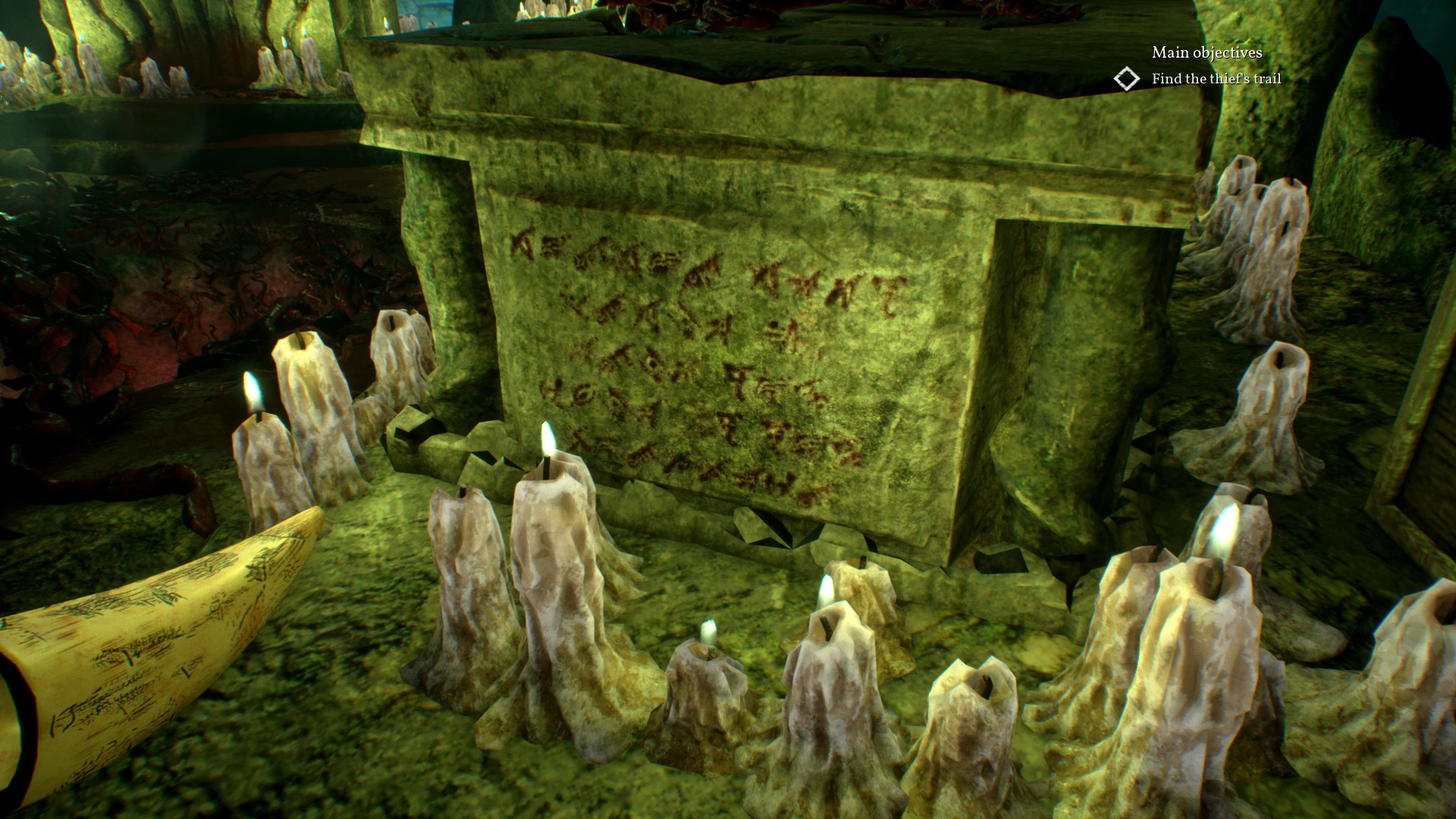 This one is a nice little message from the environmental design team:


English: “Hi it’s Lucie, I’m your friend and your cub”


“Lucie” is Lucie Allaire, an environmental artist who worked at Cyanide Studios at the time.


The altar on the other side of the room is a mirrored version of this one. 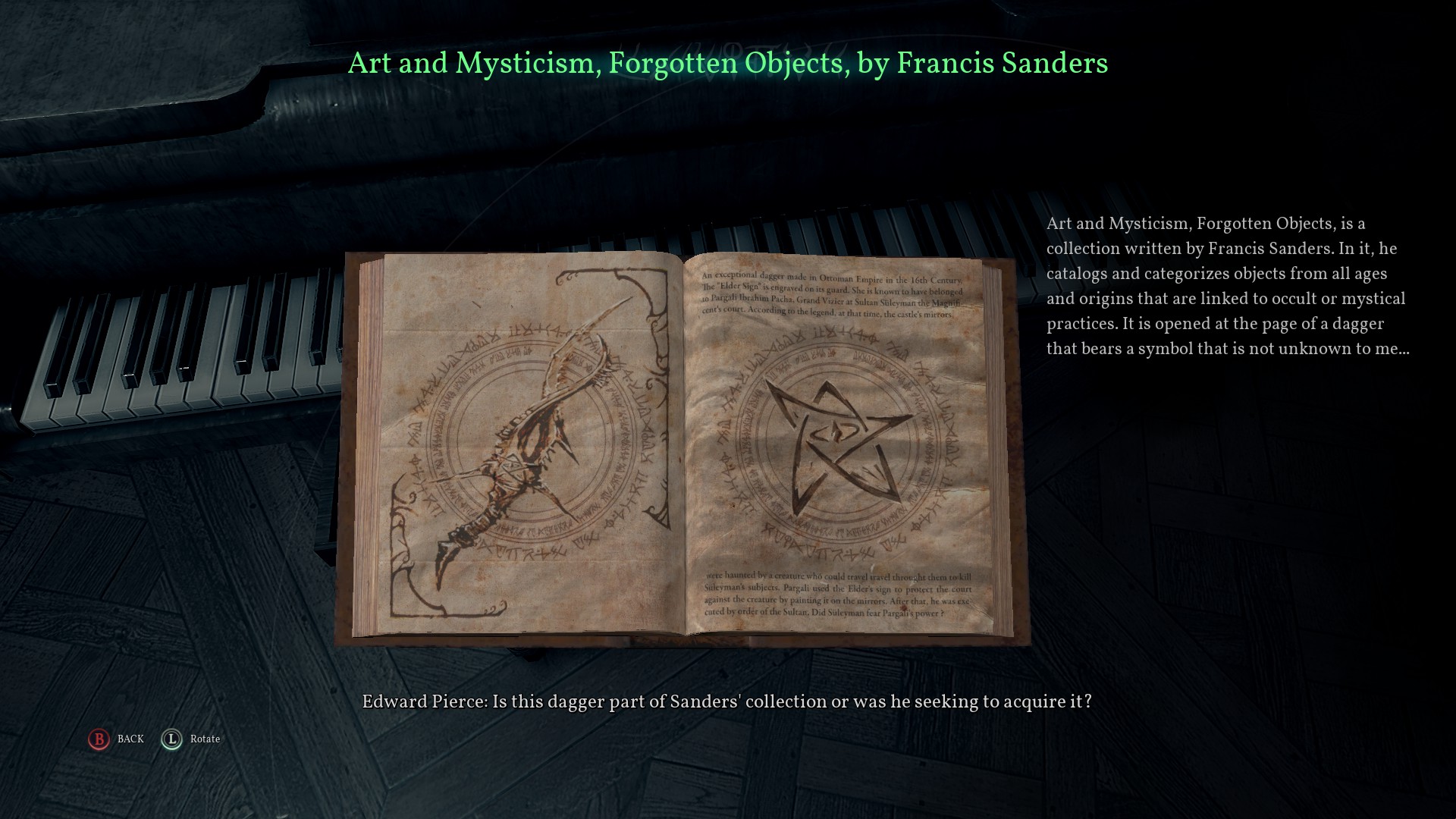 The outer ring on both symbols is a repeat of:


The inner ring is not legible, but from the few letters I could decipher it’s a French sentence. 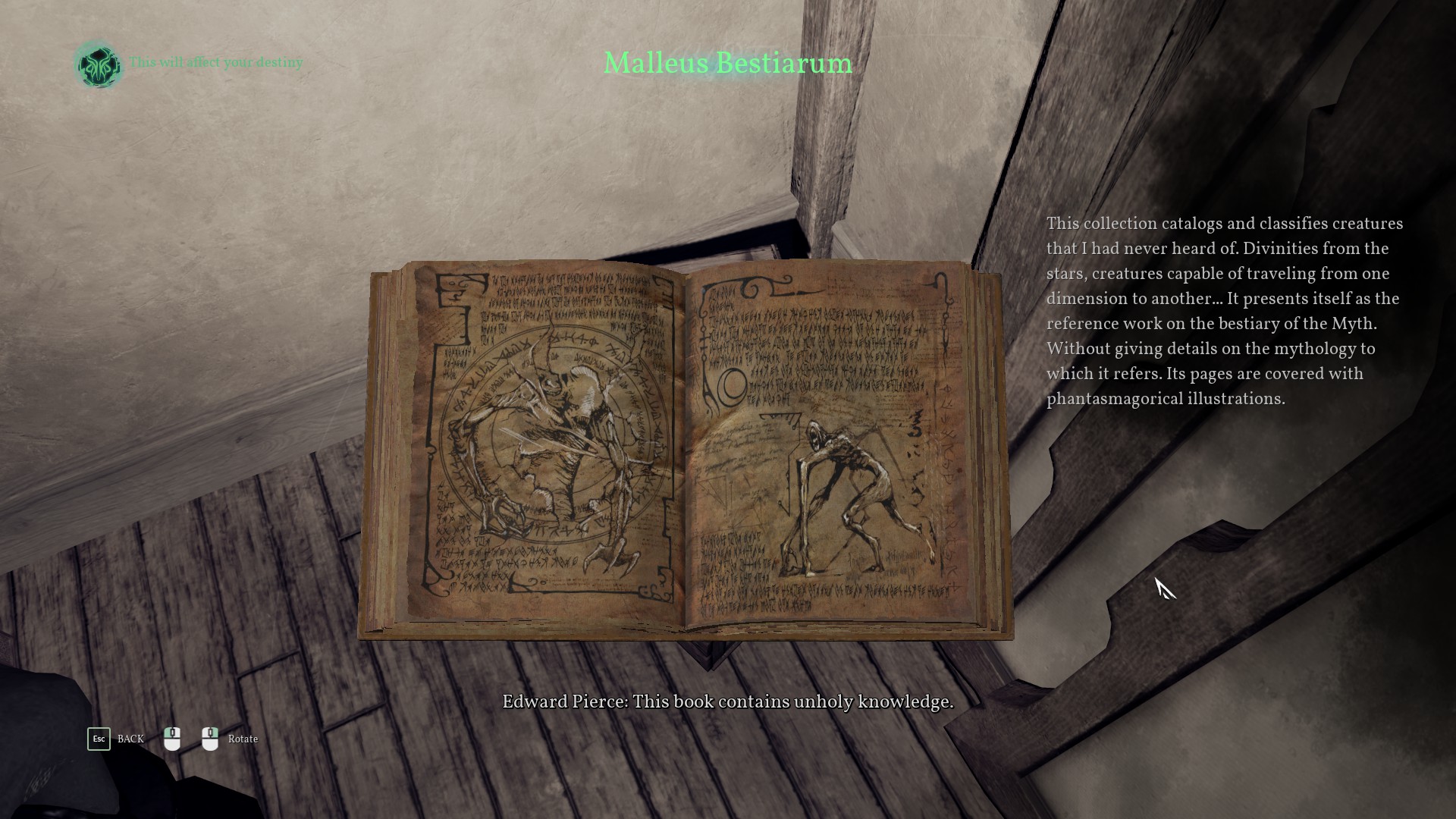 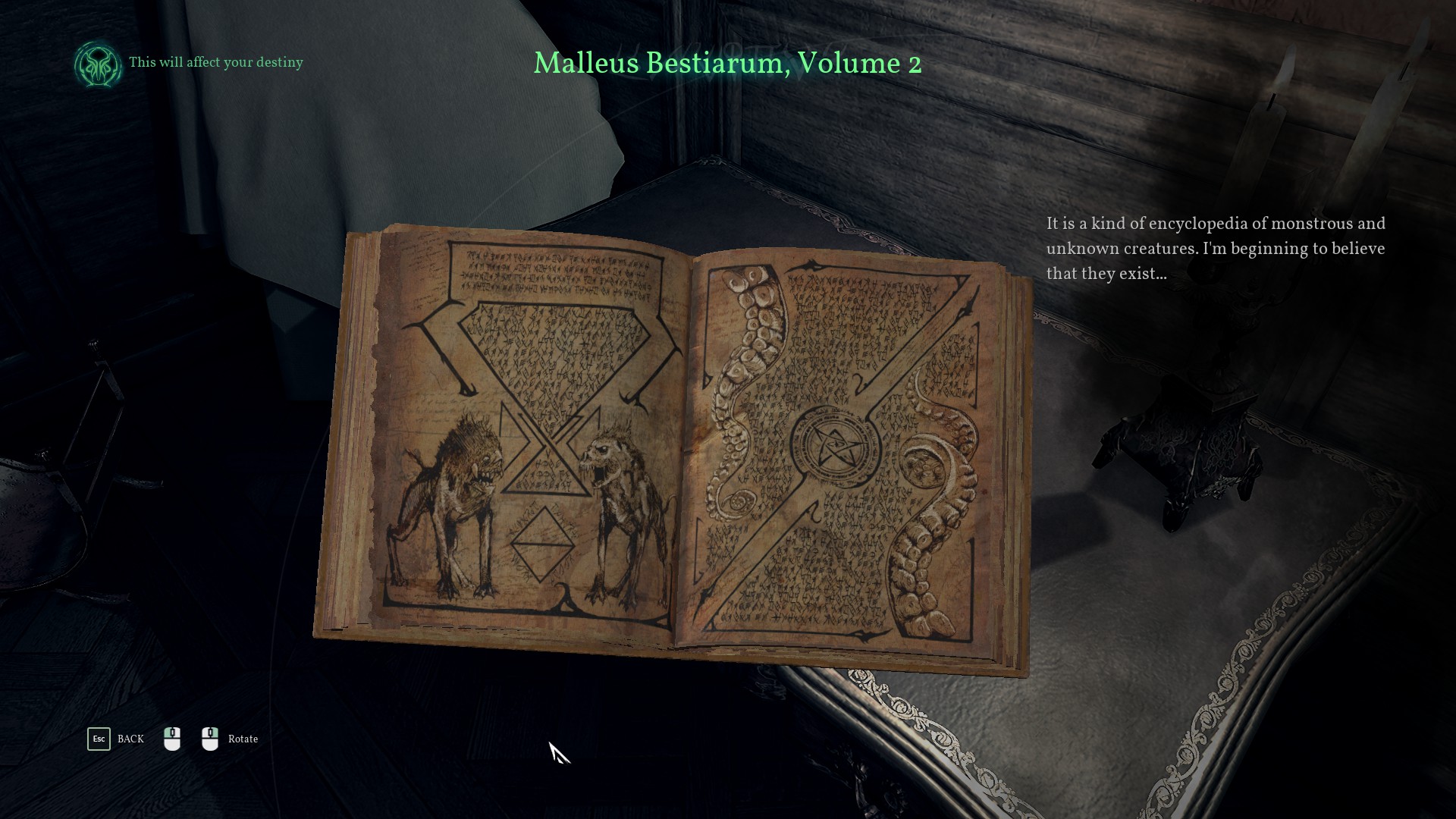 Hakkim Tekki is the lead environmental designer at Cyanide Studios and the one who designed all books found ingame. 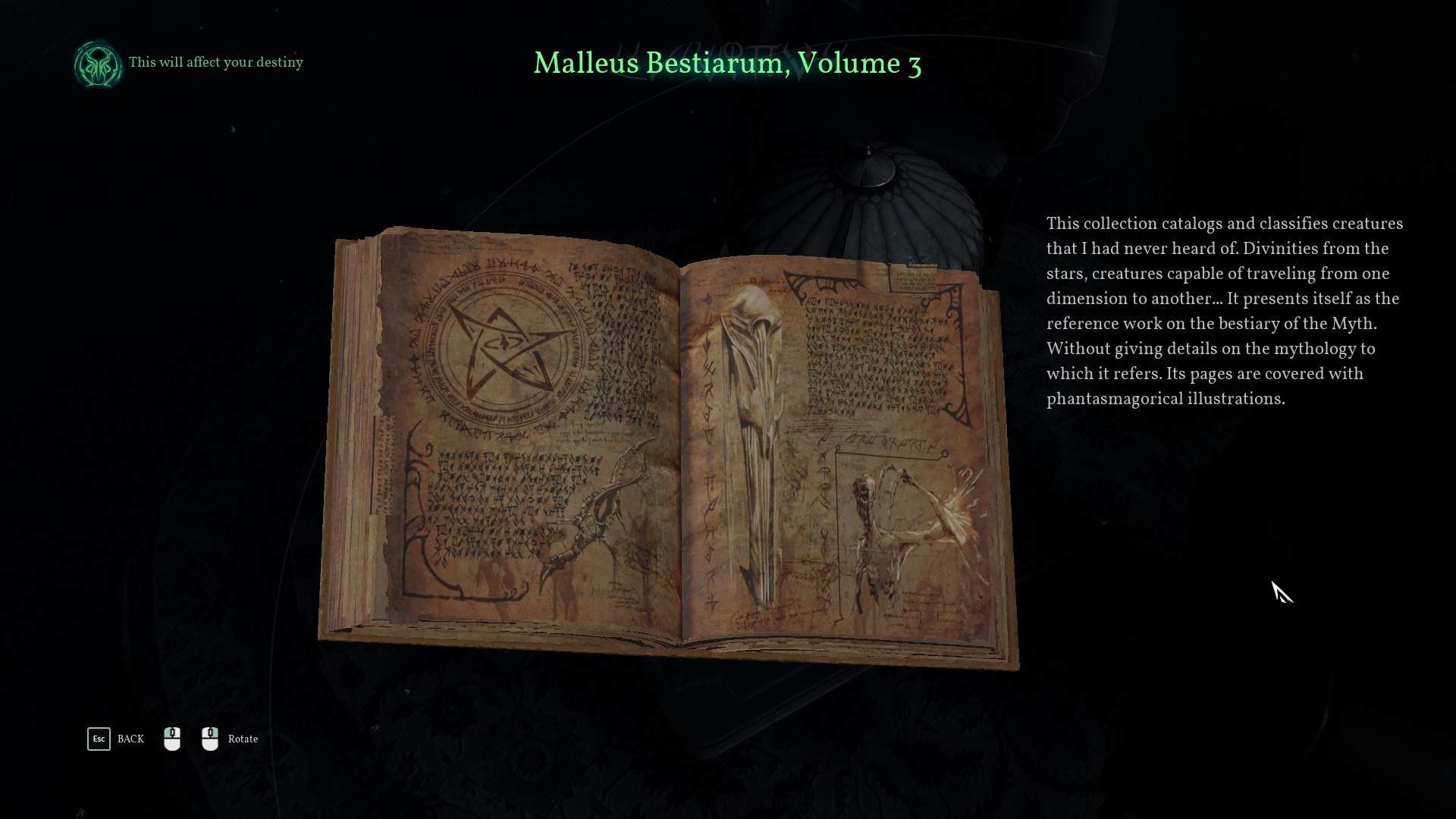 The jewel is the left page refers to is an amulet found in Algernon Drakes bookstore and references the short story “The Hound” by H.P. Lovecraft. To my knowledge, there is no further information about this amulet or story to be found, in the bookstore or otherwise.

Intermission: R’ylehian language and its use

There is a need for some elaboration before the final two texts.

R’ylehian, while fictional, has a rough outline of a language as described in various works of Lovecraft and other authors. Several students of these works have tried to piece together a rudimentary “Cthuvian/English dictionary” in 2007 which is the source of most of my knowledge on the matter and, as far as I know, the “definitive” work on the topic.

The 30-page dictionary is a fascinating read for those interested in the matter and is available for free online.


Back to the topic at hand, while I did call the dictionary the “definitive work” on R’ylehian/Cthuvian, it is not without its flaws. Some words are pure conjecture, which in turn is used to derive the meaning of other words, resulting in a very rough approximation of the meaning. Even with the word itself having a somewhat defined context, it is wiser to view it as a part of a sentence instead of a singular entity.


In short, the language is about expressing concepts, rather than absolutes.


This is important because whoever is responsible for the next two texts went above and beyond anything required for this game.

Chant of the Cultists 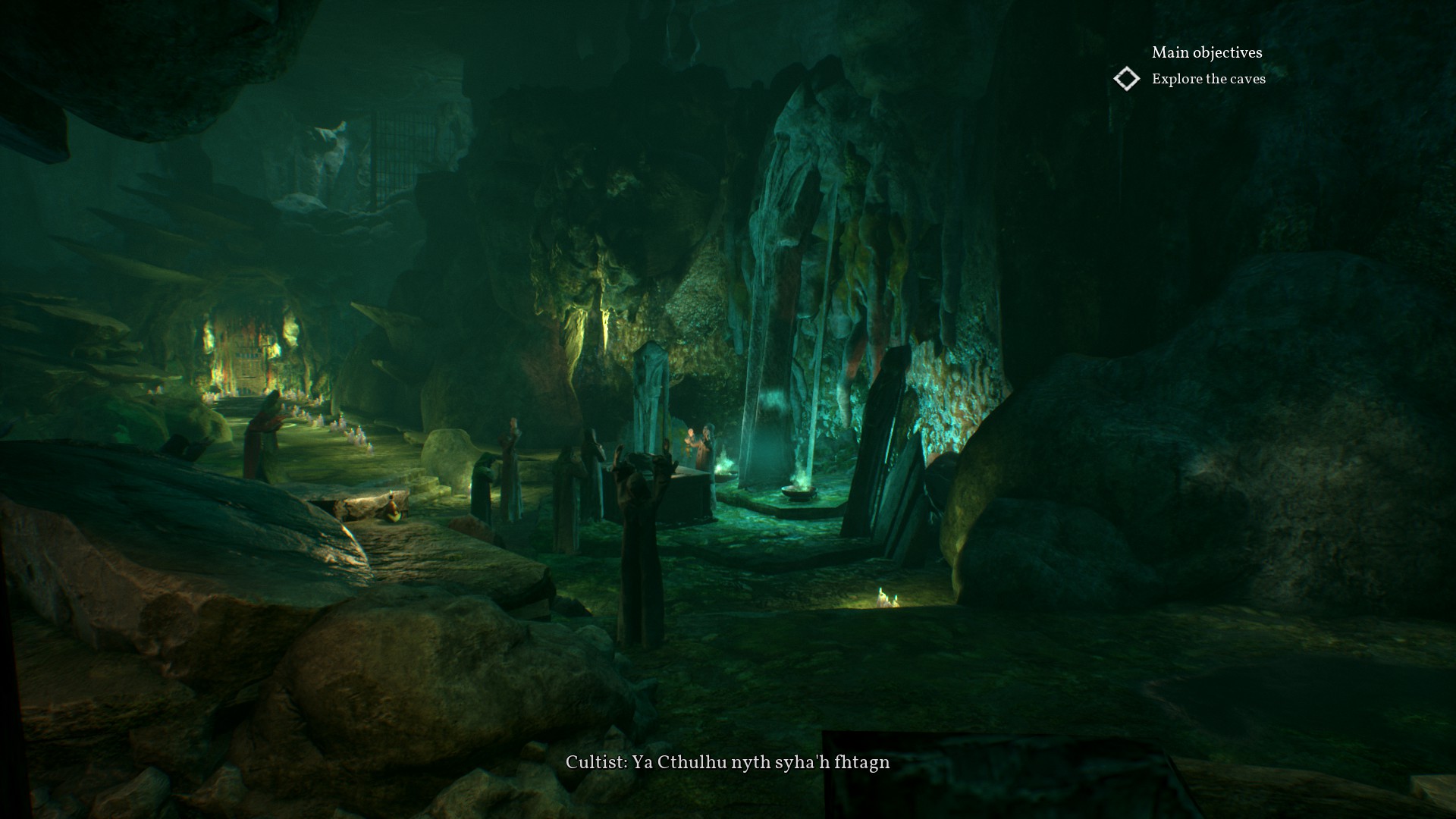 The chanting in the cave is easily missable as I found out (unless you play with subtitles) and there’s nothing that indicates how marvelous it is.

– “I am the servant of Cthulhu, the eternal dreamer”

– “My flesh is born of Cthulhu’s flesh”

– “My mind is born of Cthulhu’s mind”

– “My soul is with Cthulhu [when] he goes to Earth”

– “We pray for Cthulhu to come to Earth!”


What’s so impressive about this is that not all of the words used in the chant are used as provided by the dictionary, but have been read up on, and interpreted according to the context they are used in.

All of this pales, however, before the magnum opus that is the statue of Saint Brendan.

The Statue of Saint Brendan 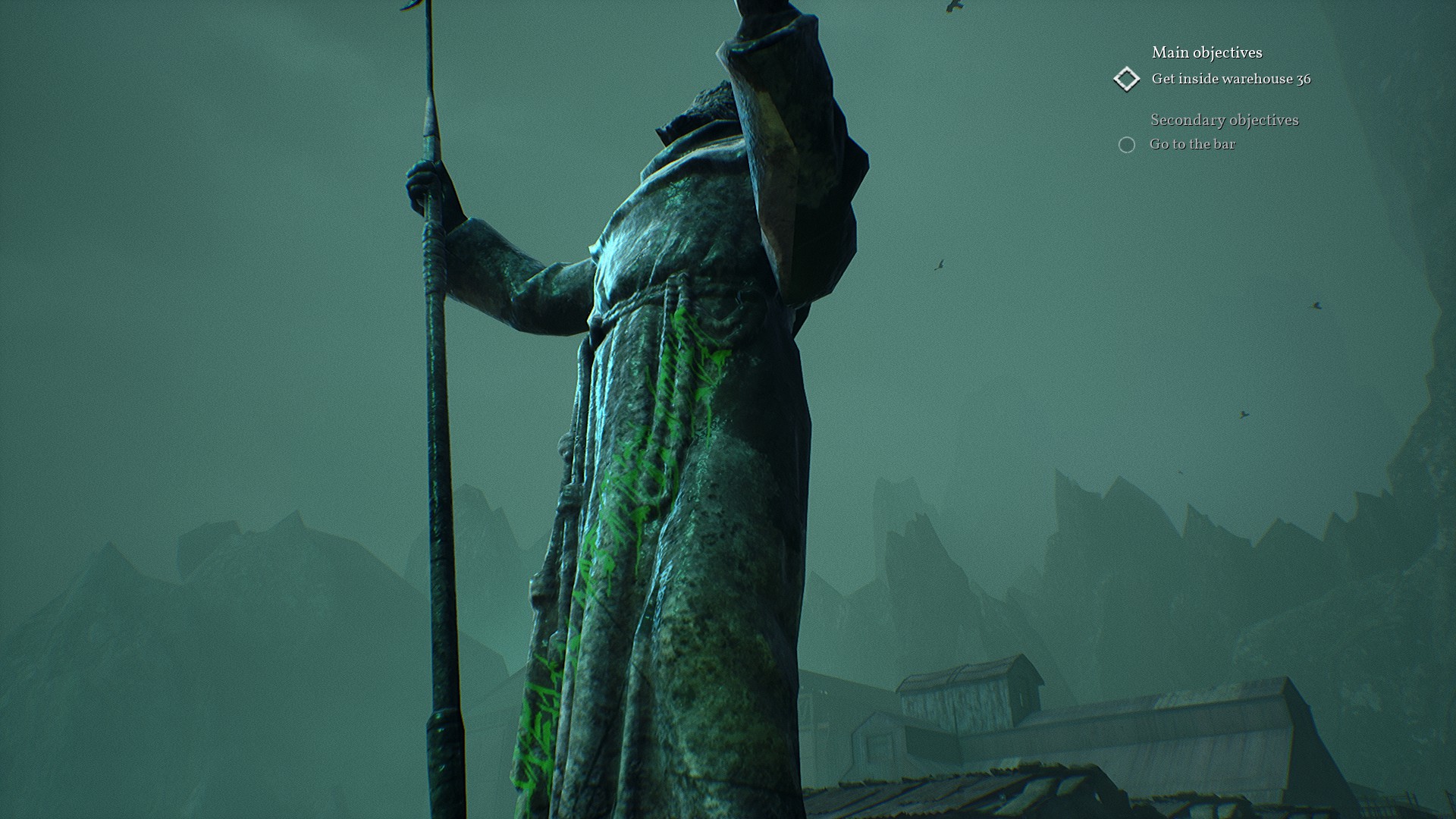 The statue of Saint Brendan has three different pieces of text written on it: On the front, the back, and on the base. 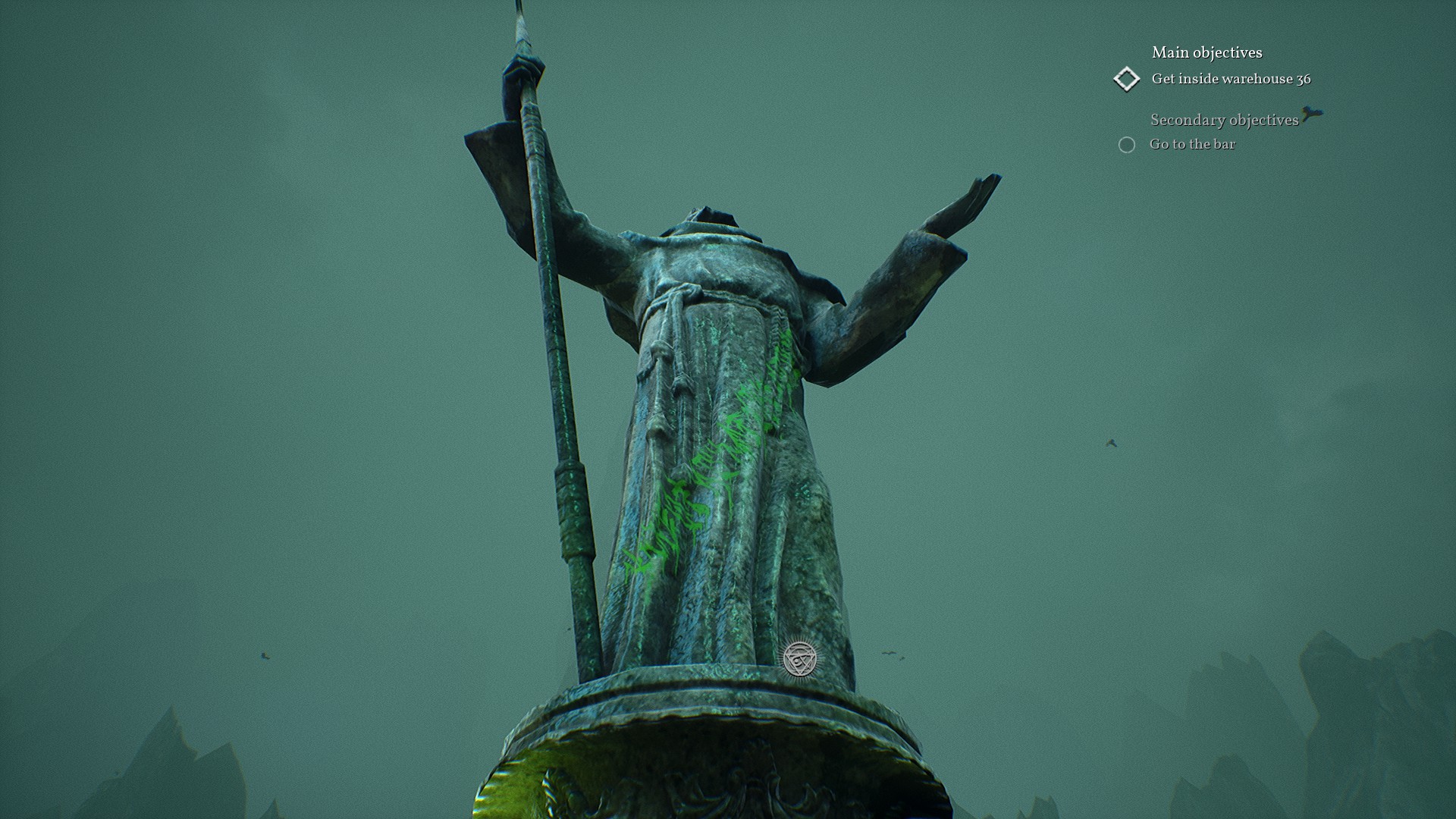 lit. “My mind crosses over goes to the realm of Earth its amen”


“ch” and “bug” both mean a form of changing location.

“h’hah” consists of the prefix “h’-” and “y’hah”. “h’-” is a form of talking about something. “y’hah” is part of a curse and is read as “amen”, but considering “y’-” as a prefix denotes the speaker, the original can be translated as “my master XY”.


The sentence as a whole can be translated as

“My mind reaches into the mortal realm as its master.” 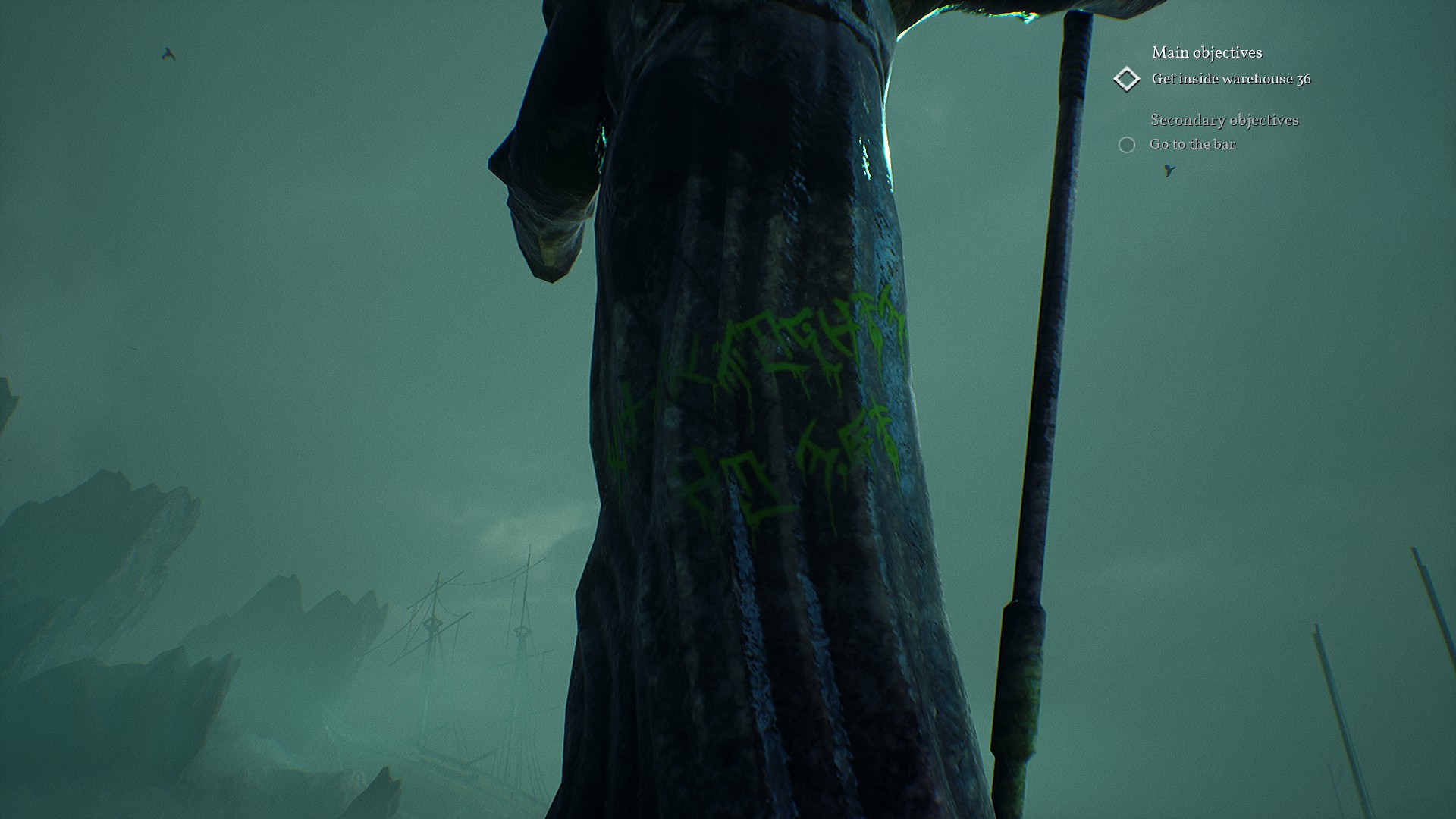 
This can be read as “The awakening is coming”. While a literal translation means “sleep does not come”, “nafl-” as a prefix negates the word it is attached to, i.e. “the not-sleep is coming”. 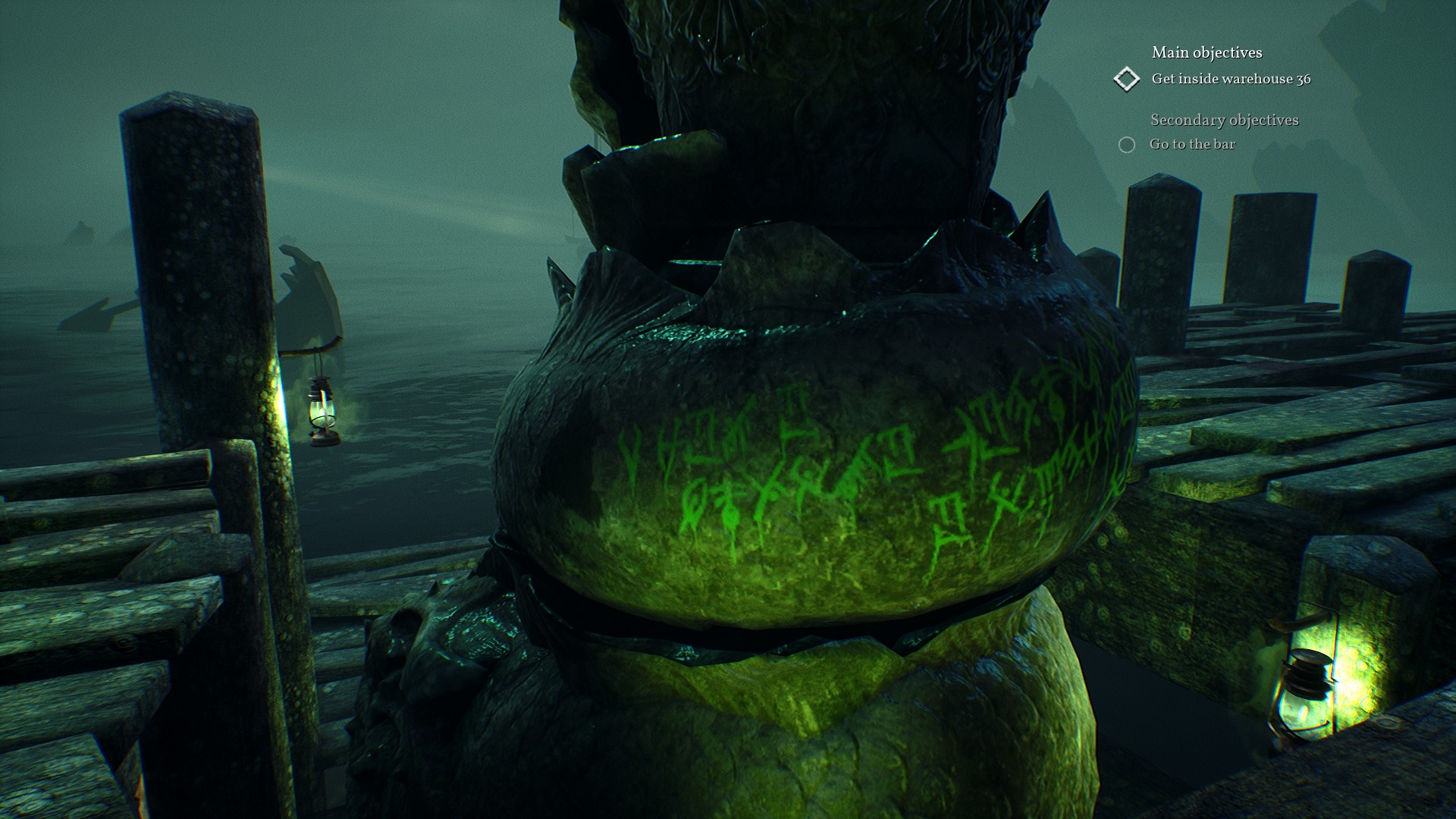 lit. “Its do they its / yet secret beyond threshold / its dream do / dream priest”


This is a remarkable sentence because, while trying to decipher it, I noticed something about known words that wasn’t denoted in the dictionary: words ending with an “-h” are usually uncountables or many. The way “-h” is used here puts emphasis on the word being plural.

In this case, I can only approximate what the sentence could mean, as “ah” is literally “generic action”. A suffix “-f” is only seen in one other word, where it too seems to indicate a plural. “h’drn” is incredibly difficult to translate, as the dictionary translation is also nothing more than a guess.


The closest to making sense I can get is:

Its actions remain hidden behind the scenes, its order carrying on to its oracle.


To explain how I came to this conclusion:

My mind reaches into the mortal realm as its master.

The awakening is coming.

Its actions remain hidden behind the scenes, its order carrying on to its oracle.


I.e. Cthulhu is exerting dominion over Darkwater, as its awakening draws closer. Sarah Hawkins as its oracle, enacted Cthulhu’s will, leading to the events that would bring Pierce to Darkwater, none the wiser that he was playing right into the hands of an Old God.

First of all, thank you for reading this far!

I hope you found this at least 1/3 as riveting as I did when I first tried to translate the statue of Saint Brendan, which was the trigger for me to embark on the magical journey of trying to translate a made-up language from a bunch of short stories written a 100 years ago.


Truth be told, I genuinely enjoyed it. The developers put a lot of care and work into making this game as authentic and captivating an experience as it turned out to be and this can be felt throughout the game.


Thanks to Hakim Tekki and Lucie Allaire for leaving me these little messages to decipher!


And whoever was responsible for the chant and Saint Brendan – my deepest adorations! 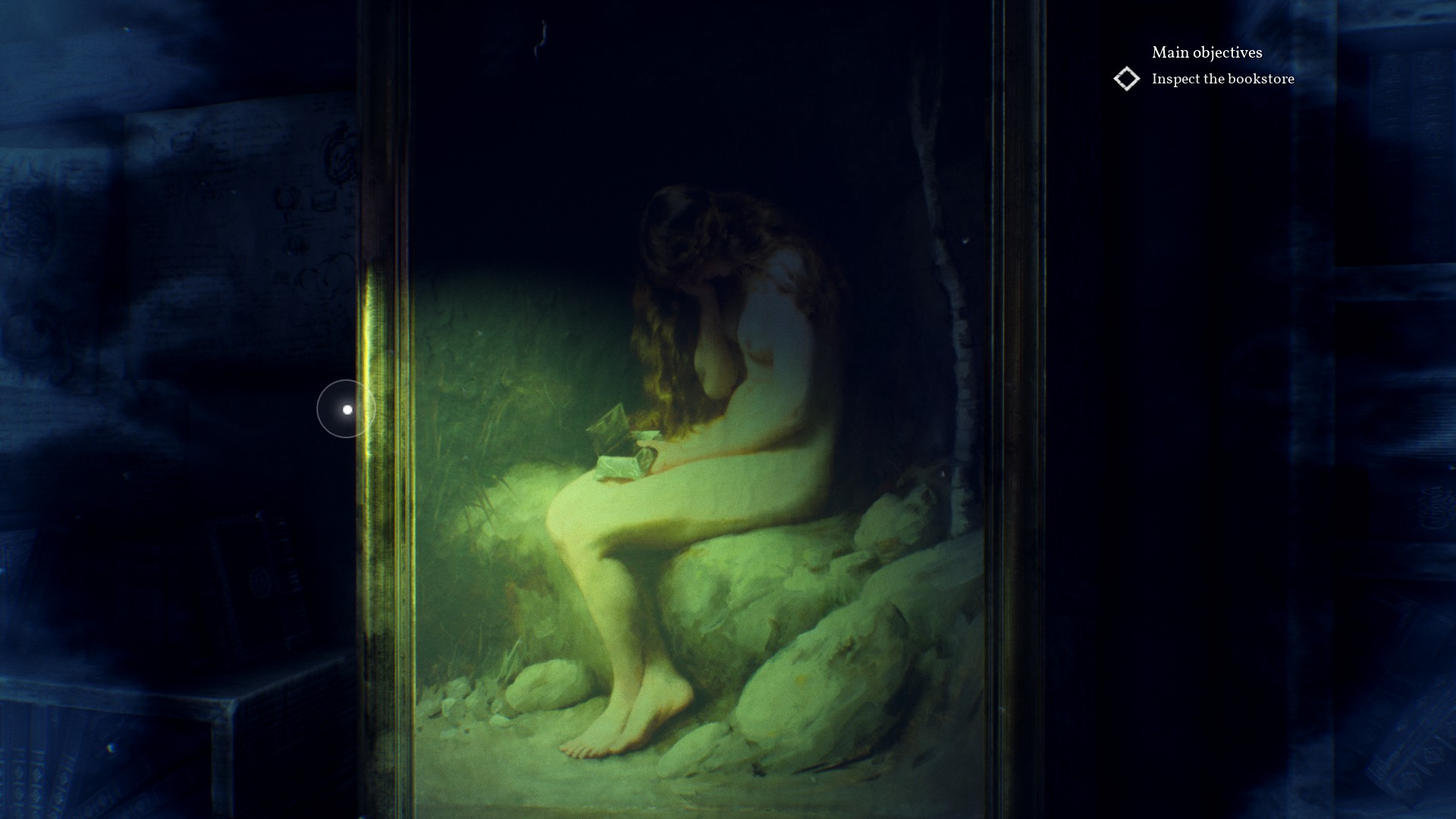 The painting covering Algernon’s safe is Thomas Kenningtons “Pandora” from 1908.

Here we come to an end for Call of Cthulhu Detailed Information About R’lyehian (Cthuvian) Texts and Inscriptions Guide hope you enjoy it. If you think we forget something to include or we should make an update to the post let us know via comment, and we will fix it asap! Thanks and have a great day!