There are 13 different kinds of flags (14 with blank flag).
I will introduce the effect and application of these flags, including the choice of arms and equipment, hoping to help you.

Archer’s favorite.Can shoot shields into the water without level 3,even head-on shooting.

Pikes are also available, but you may need more time to finish shields, especially when you on hill.
Sometime your infantry have to wait to clear archers when pikes dealing with enemies on hill.

You may get 6 golds from first island if you have stone.
Only need 3+5 to level up if collector takes stone.

Receives a 50% discount on all Skill upgrades.
Rounding,too.

Reduce all damage taken for the whole squad.
Infantry like this, but the effect is not obvious until level 2 or 3.

This trait will change formation,10-man team will not be 334 but 442.343 with some narrow terrains.
So，don’t chose pikes , chose archers or infantry.

If you have ring, well, see picture. 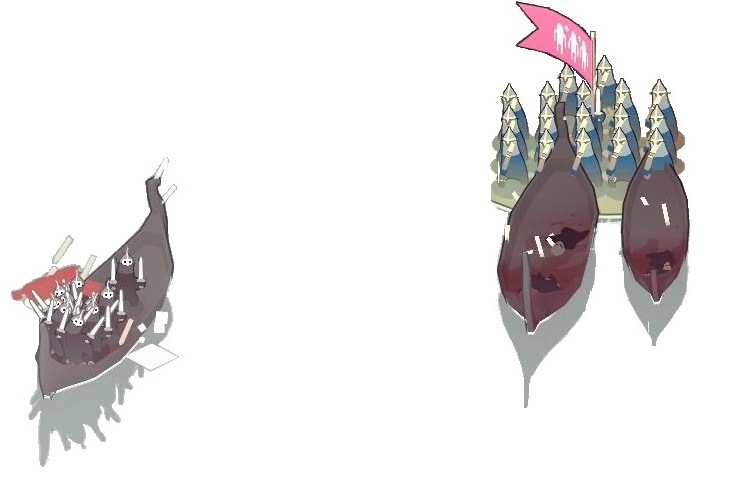 Gains one extra extra use per level on all abilities.

Sounds complicated.
Actually it means you can use your item one more time.
Only for Bomb, Mines and War horn.

Increase by about 1/3, the effect is obvious.
Speed is the soldier’s asset,so run faster and feels better.
Feels better,at least.

Reduces the time taken to replenish in a house.

Very practical, reduce 1/3 of the time, you can catch up with the next wave when they arrive.

This Commander is a giant, towering over other soldiers.

Seems like your commander is a brute, but actually not.
This big guy only stronger then his soldier a little bit, can’t knockback enemies.
When he hits people, you can hear the thud, loud and clear.

So, only Infantry fits this trait.It’s funny but not really useful.

This commander will never flee from battle.

You can’t flee by boat in battle. What’s the use of this trait? Negative characteristic?
Infantry still can retreat and the Pikes can be dispersed by the enemy. I don’t see any positive effect.
I really don’t know how this trait benefit me.

Basic attacks from this squad deal increased damage, but with reduced knockback and stun effects.

Never give this trait to Archers! Never! Or you can’t shoot shields from boats into water at all.

Recommend to be Pikes, kill faster is very important.

Not suitable for Infantry. Don’t ask me why.

Reduced cooldown time on all abilities.

Reduce about 1/3 time.
Take a Warhammer and your commander will become THOR.
You can hammer down every two wave.
Infantry > Archers/Pikes

Infantry’s favorite trait.
You can’t be knocked down by a ship landing. Neither a brute nor a big bow can knock you back.

Pikes can face boats alongside the shore with this, but they more often need to face a large number of enemies at intersections, so it’s better to be Infantry.

This is all for Bad North 14 Different kinds of Flags Explained! hope you enjoy the post. If you believe we forget or we should update the post please let us know via comment, we will try our best to fix how fast is possible! Have a great day!