How to avoid stagnation and loss of your plot of land

You’ll be spending most of your game time staring at the same plot of land, proper managing it is nothing short of essential and will save you a lot of time

The first problem we have to deal with is that only outer disciples perform work, that means that only the frailest, less efficient part of your sect is able to influence its shape outside of cultivation, and they are guided by the work table (accessible from the right side panel)

The work panel shows an order of priority for work, if you don’t change anything they’ll perform work in that order, what will hinder you the most is that crafting, miner, logger and peon work are at the bottom of that list, and builder is far above most of the work types, you’re likely to be planning your base out and every disciple will go for builder, meaning you’re likely to take ages to complete anything else if you’re building something.

Another thing to note is that each disciple has a certain skill level at the types of work, meaning they produce better results (crafting/artisanry, chef and healer types of work) or work faster (builder, miner, etc) to get the most out of your disciples have them at least prioritize what they’re best at

The work panel allows you to restrict types of work for specific disciples or prioritize one type over others, this allows you to set them to work specific jobs and keep every aspect of your base functioning at the same time.

I’ll go over briefly what each work type does

TL;DR keep vessels or good peons, one or two multitasking harvesters, someone good on crafting/artisanry, a good healer and a good chef

Something I’d like to point out about work skill is that Yaoguai are usually very Skilled at some things, my personal favorites are cat (for crafting types) and wolf (for heavy duty work), if you want to keep an yaoguai for outer disciple work you should pass their heavenly tribulation and then reverse their cultivation (rebirth pill or soul pearl miracle)

While you can neatly organize your workers to the best of your skill, it wont matter much if they don’t want/can work, to avoid these issues you should take a few things in mind

TL;DR Give them Beast Clothing, good feng-shui room, speed talisman and some drugs 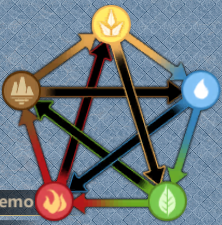 Yes, feng shui is relevant in other parts of the game such as damage


To even be able to read feng shui you’ll need an “Observatory”, which can be built from the Sect tab in the build menu

An Important thing to do while building on your sect is to scatter at least 1 bell in each corner of the map, it makes manouvering outer disciples much easier and avoids their deaths sometimes


I’ll put some examples now, most of these use the Marble-Iron relation since you can easily get marble from the ruins of Taiyi Sect 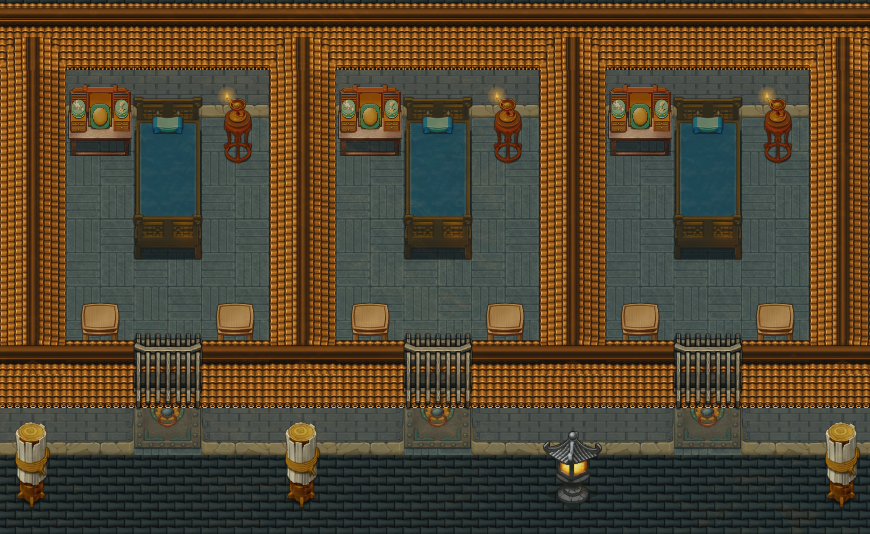 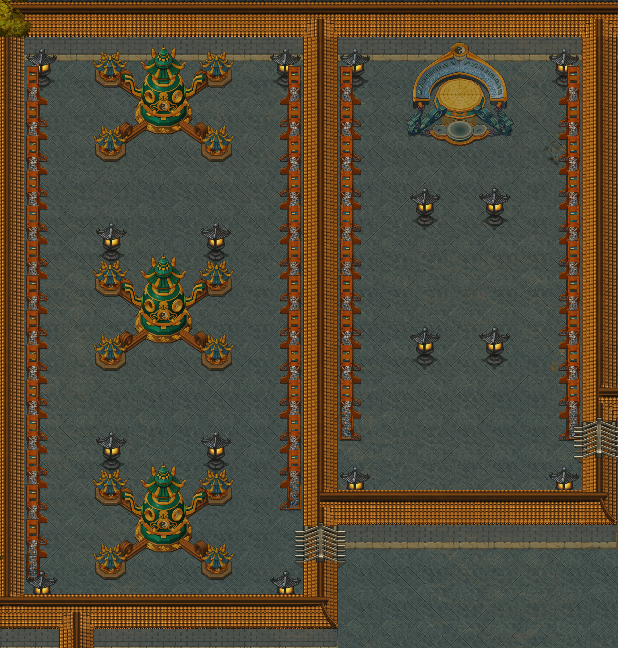 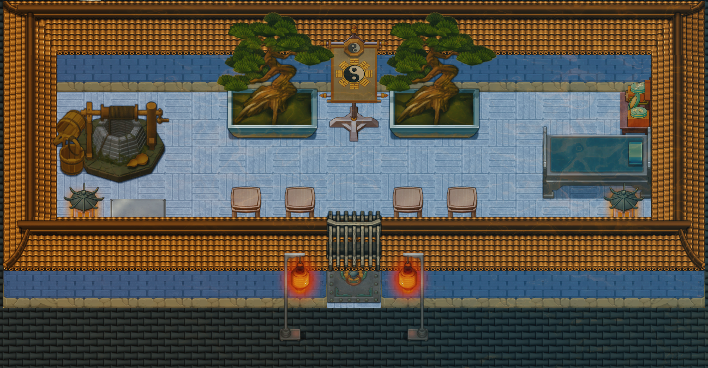 Inner Disciples are mostly removed from the whole sect mechanic, they use the Leisure buildings to improve their mental state (viewable under the kitchen and workshop in the above picture), sleep in their bedrooms and carry on with cultivation, the most use they show towards the rest of the sect is simple, defense


Much like nobility, they are the ones that take care of most of the attacking parties, outer disciples wouldn’t stand a chance agaisnt cultivators so don’t keep your base without an inner disciple, raiding parties aside your inner disciples can help defending your sect if they are sect to defensive mode 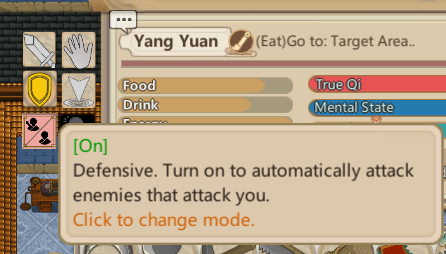 
The other useful thing inner disciples (Xiandao) can do is alchemy, it has a ton of useful buffs, as long as you have the recipe


Inner disciples can also (sometimes) take care of burials, healing, hunt manually and perform miracles specific for outer disciples, sometimes they produce the cool works of art in form of Go Diagrams, Books, Paintings and Music Sheets, they are mostly devoid of practicality and can be used for trading and gifting, you can however spectre refine it, create an artifact and rename it so you can rickroll your enemies. 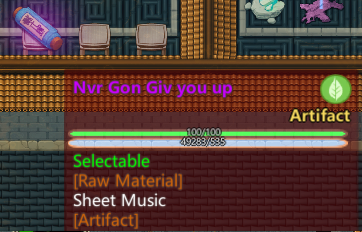 I find it worth mentioning that you can forbid usage of buildings between inner and outer disciples, sometimes its useful like limiting entry to dangerous rooms for outer disciples but usually I just use it to forbid them from doing weird paths because the well inside a cultivator room was slightly closer, just click the building and select who can use it on the side tab

The Sect Stats are viewable from the sect menu (right panel) 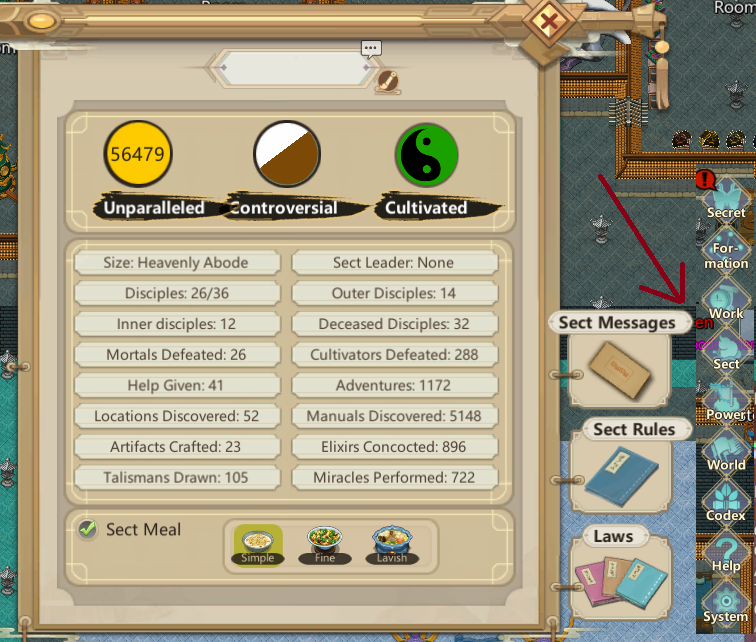 The most important of these is the sect reputation stat (yellow circle), this is the number that allows you to “level up” your entire sect (Fortress:0 rep. Sect:500 rep. Paradise:2000 rep), it stops being useful after 2000 rep, since that’s when you unlock branches (in short, more sect leaders that give you small buffs), from the moment you start this number should be going up as you defeat tougher enemies, the higher this number, the harder the attacking parties, by lategame you’ll be facing entire teams of 8 Primordial Spirit cultivators from sects, which you should be able to deal with and make use of, if you can’t, try to lower this number, the only way I know of is to send a terrible cultivator to deal with events, they will **** up badly and come back injured, losing a few points of reputation, be sure to be able to heal him or you’ll have a limbless klutz 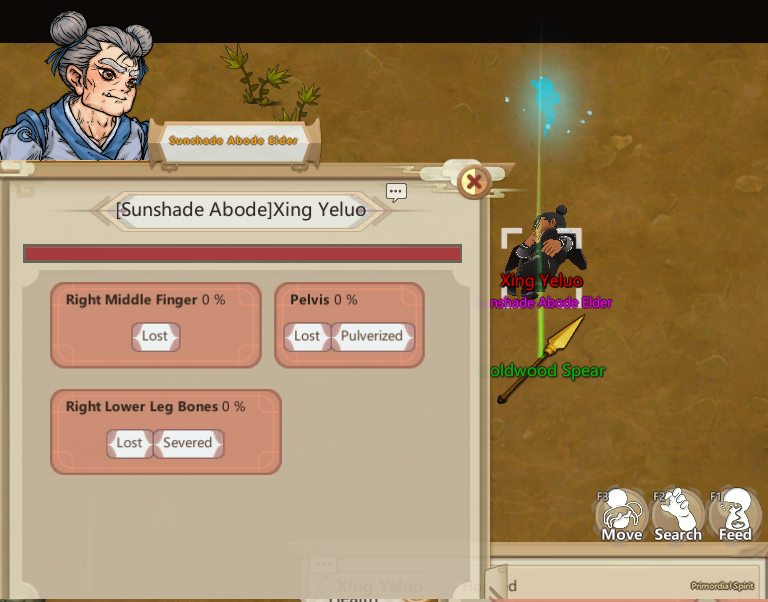 Cultivators don’t really die of hunger, if you dont manually kill them when they can’t move they’ll just live in pain until they’re out of lifespan

At least you can make a collection out of them


The other useful stat is Sect Standing, whether you act aligning to “Good” or “Evil” changes the choices you get during events and how people perceive you, usually you want to keep this balanced, things are rarely black and white here and you’ll learn to beat people with clubs before debating feng shui


Last stat is Sect Feng Shui, just build stuff with good feng shui, easy, never got it out of cultivated

The Base Game allows you to have a divine pet to help you on your mundane and cultivation tasks, there are 4 kinds of pets and you can only have one at a time (they share the same “soul”)

there are more pets, but they are behind DLCs which I don’t own


They are a blessing to your early and mid game, will likely be the best warrior you have for invasions for a while since their progression is broken early on, they also act like vessels, doing peon (moving) work and pets have each their specific kind of toolset to help you, usually not really that important of a difference


Just please train them, when they are hesitant pay mind to what they are asking, you can either have a strong warrior-worker pet or some pest that spreads drugs and attacks everyone


Their diet influences and behavior influences how they grow, you can change their food of choice on bottom menu when clicking on them


Give them a bed, build them their statue (to revive them should they fall, there’s no price just cooldown, they lose no experience), assign defecation spot and other staging areas as outlined above (Bad feng-shui > unconscious enemies, too hot room>defecation and enemy corpses)


Sometimes when training your pet they wont perform an action unless the action is prompted, action is prompted when you set the behavior they are in hesitant to some positive degree, if the pet is not prohibited to do what it asks, it will do right away, some actions come by default maxed on this like train spell and the start sign is never given to the pet since you just give a glance to it, lower the acceptable level of that behavior and set it back to the max to prompt the pet into acting that way and not being bugged

You should farm a bit of each herb available from the herb garden, especially ginseng and linghzi, if they don’t prove as useful to you, just sell to a merchant, 1:1 ratio to spirit stones


Farm wheat in large quantities, its the very basic for food, and farm a bit of cotton, herbs and Gingko


If you’re going to do a boss battle or some big battle, make use of the Bells placed around the map to have your disciples survive, but it would be ideal to promote them to inner disciples and later downgrade them with a rebirth pill

Here we come to an end for Amazing Cultivation Simulator Proper Management in Building + Efficiency + Sect Stats + Base Game Information hope you enjoy it. If you think we forget something to include or we should make an update to the post let us know via comment, and we will fix it asap! Thanks and have a great day!