I found the game’s initial stages more brutal than In Celebration of Violence. So this guide is for (and) players to learn the mechanics and systems of the game to help them get past the initial hurdles.

I’m sure there will be more guides on how to get OP quickly, and how to breeze through AVR. But I try to stay true to the game’s mechanics rather than how to beat it.

In this sense, I won’t post anything I consider a spoiler here, but your mileage might vary.

ICoV is a reference I may make, but quite a lot of the core systems I use are similar enough to me to quote my younger self in the original “Getting Started” guide.

*** I know it’s not quite there yet, but it’ll be done soon enough. 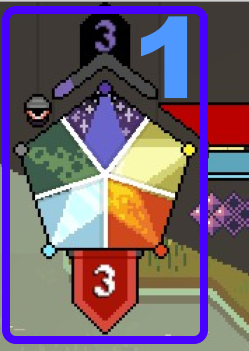 The chevron to the left: Your progress towards the next step

The pentagon: The 5 Gods and Their Damage Types:

Grey Armour condition. The item itself turns red when it reaches 0

Noise reduction: This reduces movement speed, environmental sound that “covers” you like rainstorms or raging fires, and light armour

Speed meter. Adjustable between 25% to 100% via mouse scroll wheel. Resets at 100% when you sprint

No 5: stamina replenish delay, acts as a countdown until your stamina starts replenishing 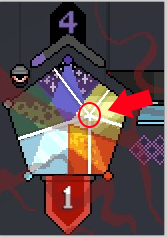 If applicable, please spell duration. Once you are invisible, the white lines will begin at the exterior and move inwards. Once they reach the middle, the spell is over and you are made visible again.

Spells: icon, cost (purple pips). You can modify the highlighted/active spell by clicking “T” and casting with “CTRL”. Or you can quickcast with the number key.

If I found a new spell and wanted to keep my first spell, I would hit the T key until the one I can’t live without is selected. Then, I would pick up the new spell, replacing it with the highlighted one.

TO BE DONE It’ll take some time because it’s quite a bit.

(Leveling and a Newbie Trap,)

The act of leveling up, which is simply increasing the number at the top, has a nice effect. You may experience some effects do when you level up, but you aren’t getting stronger or any other benefits.

It’s similar to a currency count – an indicator how much you have left to spend on stats or skills.

The number represents 10XP per level + 0-9XP’stored’ in the chevron. 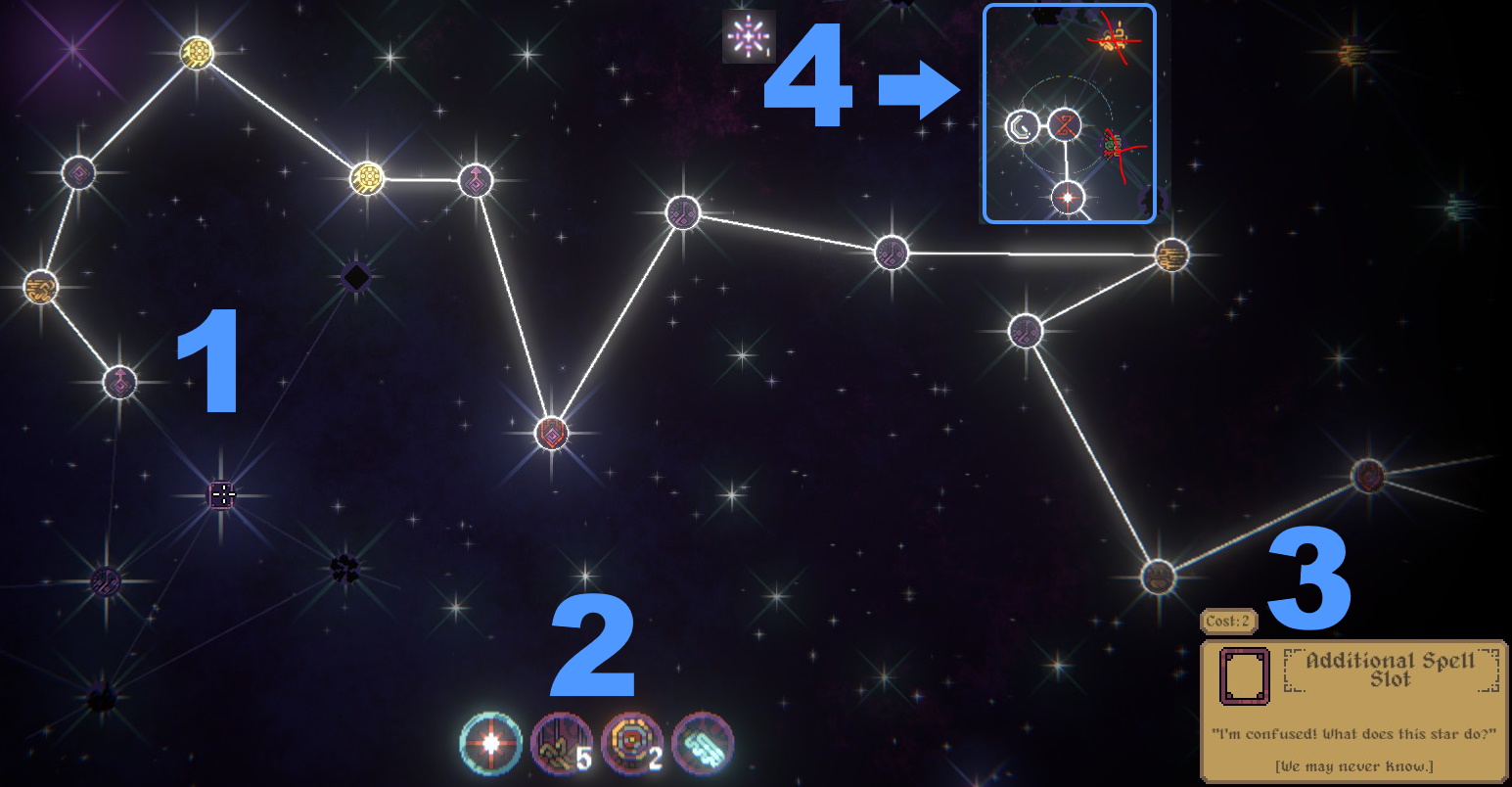 1 – You create a line when you acquire skills. Each node may have 2 connections so you will have choices about which skill is more valuable and which skills let you expand further down.

2 – You may come across replacement skills in your travels. Clicking on the node highlights it. The replacement skill will replace the node’s former effect and replace it with its new one. If you choose skills that you consider useless to advance further, you can make them useful by replacing them. It costs nothing to slot in replacements.

3 – tooltip of the skill you are hovering over, its title, some flavour text hinting to its effect, and its cost for (lower left of the tooltip

4 – The 8 pointed star opens up already taken connections. Select the star, then choose the node you want. The rectangle skills that were previously unavailable can now be used. 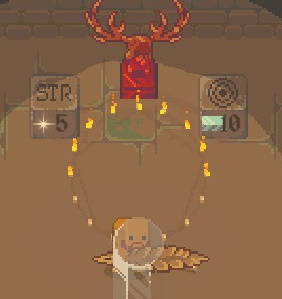 Stats is available for purchase at the god’s shrines

This will be the case: Left side -> Get 1 statpoint XP(1 STR for 5 XP); right side -> Increase god’s favor towards (as indicated in the number of lit candles ()) by donating X amount (10 Steel). Donations could have other, more beneficial effects.

Here are some words of wisdom:

Skills can be exciting, fascinating, and fun. Don’t rush to learn them.

There is a system regarding your strength value and the weight (, wielding) of weapons. vastly decreases attack speed while you have strength below (, regardless of) threshold. As soon as possible, increase your strength to the point that you feel confident and able to use the weapons you choose. Additional str can do some damage and dex will have an impact on swing speed. But first you need to build muscle to connect the bad end to your weapon with the soft part of your enemy in a reasonable amount of time.

Weak armour can slow down movement and make for a miserable experience. Don’t do it!

You can’t go back to where you came from. You will have to circle. During the game, your home base is still useful.

I’ll quote myself here with some edits. Surges work almost exactly the same as in ICoV.

A Word on Surges

Surges are magical shockwaves directed at you, cast with R key. They heal you (, close allies) a little, restore your stamina, damage/stun enemy close by, and break items like doors or rocks. Surges can be refilled by 1 charge when you sleep.

If cast quickly enough, they can also heal depleting damages (the yellow bar that overlays your life after you take damage).

Healing (is not the same as surges of)

The Inn or tents for sleeping?

You can buy meat in the towns

Blood slimes are used to kill people and often lead to death.

You may also be able to heal yourself with a skill.

Each armour piece has two values for each damage type: resistance or defence

Resistance, also known as damage number, is the ability to reduce damage. It can be used in an exponential fashion to guarantee diminishing returns.

0% resistance would result in a doubled raw damage value.

After the resistance value is adjusted for raw damage, defence takes effect. This indicates how much will be absorbed by armour pieces and how it will damage them. The rest goes on to you, reducing HP.

Additional stat effects and skills that armour may have won’t work because the armour piece is now dead, or turned red in the HUD, will not work anymore. You have two choices: either repair the armour piece, re-enable it’s protective values and stats/skills or replace it. A piece that is damaged beyond repair will be permanently destroyed if it is simply undressed or replaced with 0/x HP.

Alchemy (crafting spells, for the most part)

Alchemy (or) is used for crafting new spells. It can be done only once per run. You will likely forget the recipe and spellcrafting will fail if it is not rewritten.

The process can be tedious.

1 – Set up the crafting area from your “C”, following the recipe. Avoid obstructions such as walls and get anything within its boundries that the recipe doesn’t require. If the recipe does not require bushes, then remove them.

2 – Cast it and make it stay. If it is obstructed even slightly, it will vanish after about 2 seconds

3 – Start tossing material into it. You must match the exact number. Oversupplying could cause the process to fail.

4 – Once you have all the information in, hit “E”, and magic should happen. A new spell will also appear. 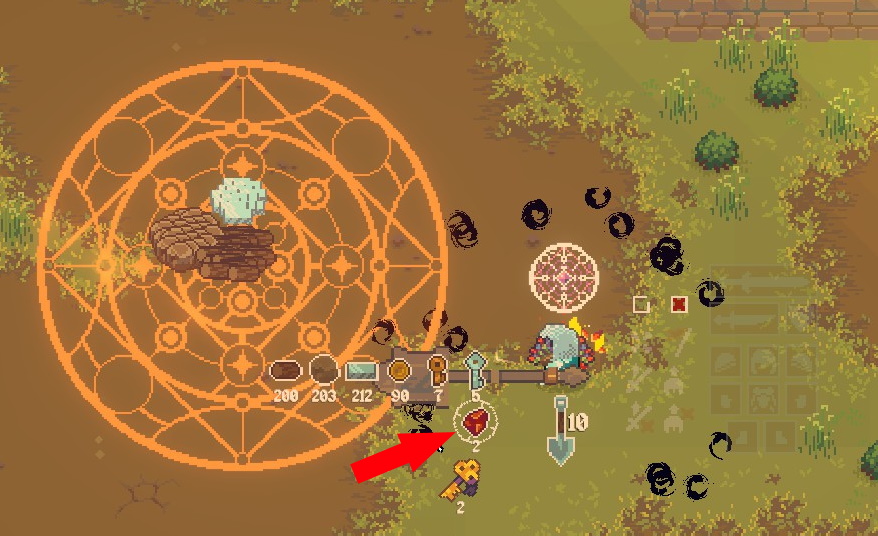 You can have problems with your materials by simply auto-picking them up, throwing off your count, etc. It is possible to aim for where to throw the items.

– First, click on the resource. A circle will appear around it as shown in the screenshot

Move your cursor wherever you want it to land, and then click your mouse until the exact amount is displayed.

– then You move a little You can move the selection to the side, or you could add an additional item to the next material.

Trespassing. NPCs will display a small symbol in the lower left corner when you enter an area they consider unsafe.

If an NPC spots you, he will quickly gain aggro until it becomes really bad and start attacking.

Hope you enjoy the post for A Violent Revelry Walkthrough and Basic Gameplay, If you think we should update the post or something is wrong please let us know via comment and we will fix it how fast as possible! Thank you and have a great day!