Obviously, unlike regular chess, the chess pieces you’ve grown to love can now move in between timelines and time itself.

It may seem daunting at first, but I a*sure you that it’s not as complicated once simplified down to its more basic forms.


Some basic terms should be clarified before reading this guide, to better understand what im saying.


Relative space: Space that a piece starts in when time travelling

Timeline: the ‘vertical’ axis of the boards.

Time: the ‘horizontal’ axis of the boards.


It should also be mentioned that you should think of time travel and timeline jumping in 5D chess as just another direction the pieces can move in. That way of thinking makes it much easier to understand why and how these pieces are moving in their respective ways.


We will go through the pieces in the order:

The simplest one to explain, the rook can only move backward through time, can move any number of board, on the condition that it stays in its same relative space upon travelling. 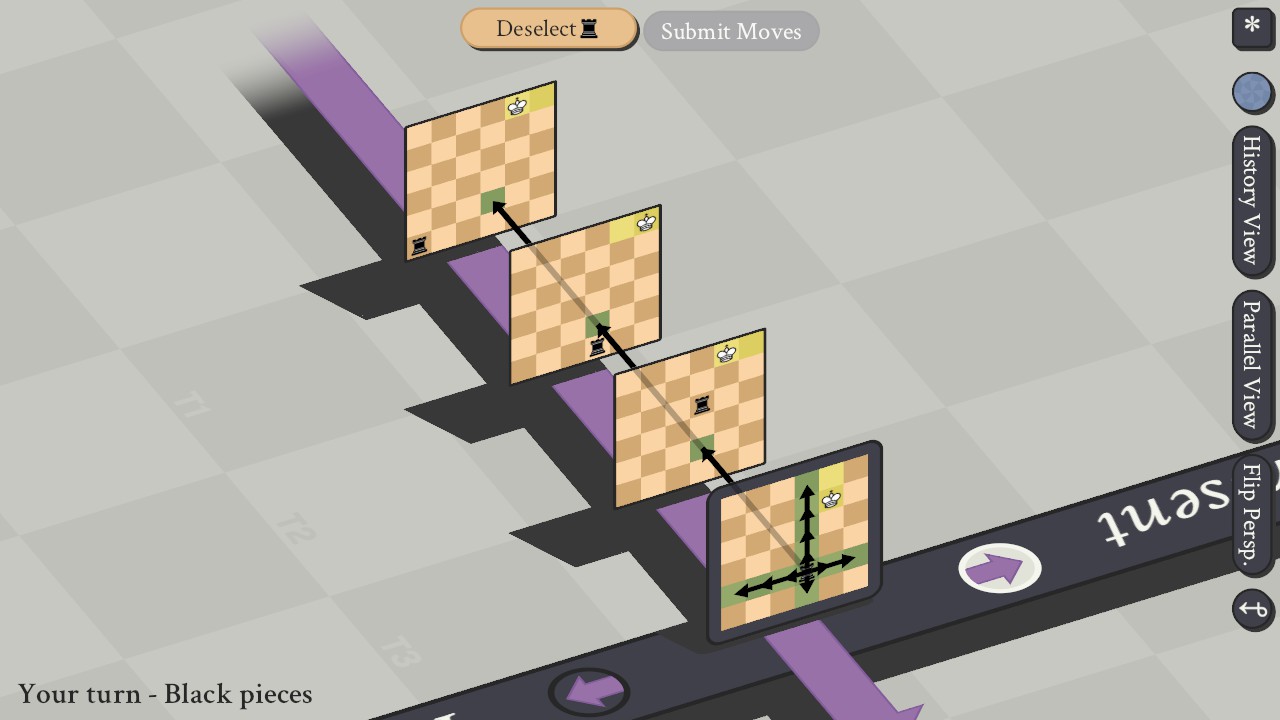 Remember that the rook in the past does not have an affect on where your present rook can move through time. 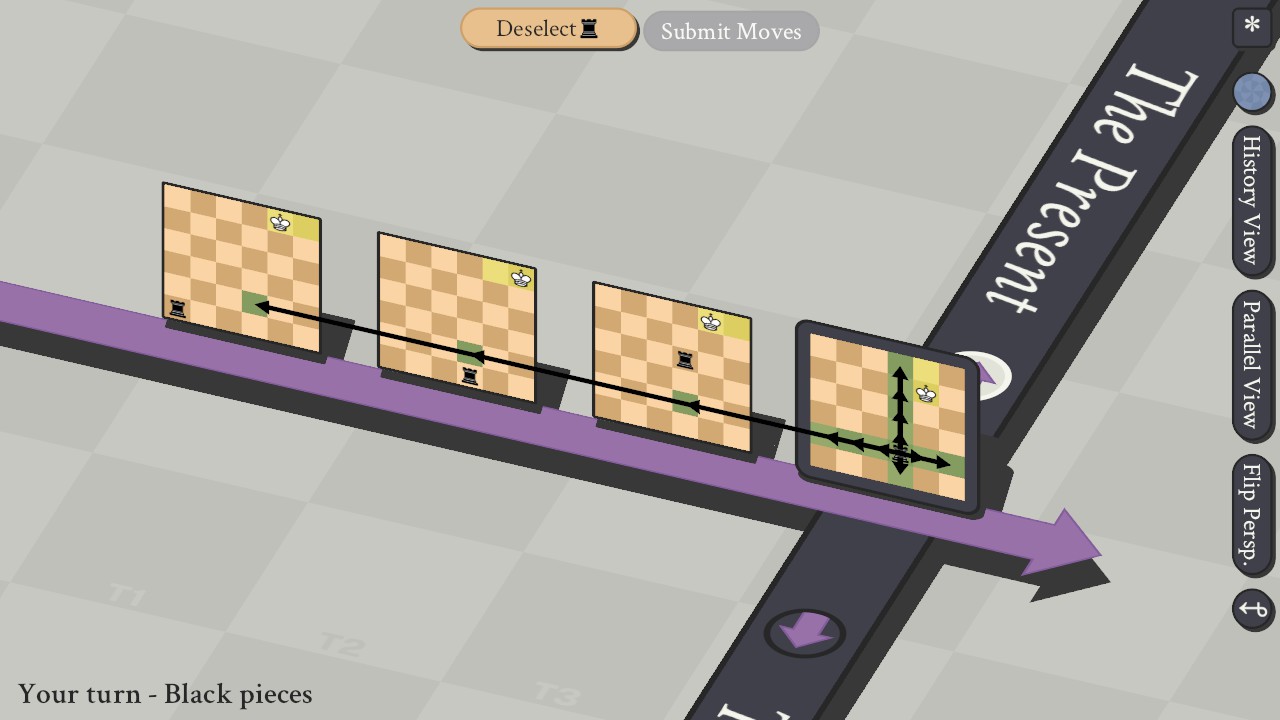 Pawns cannot move back in time on the same timeline that they are on.

They can only jump to a timeline that is “in front” of the pawn. They can also only move one board at a time. 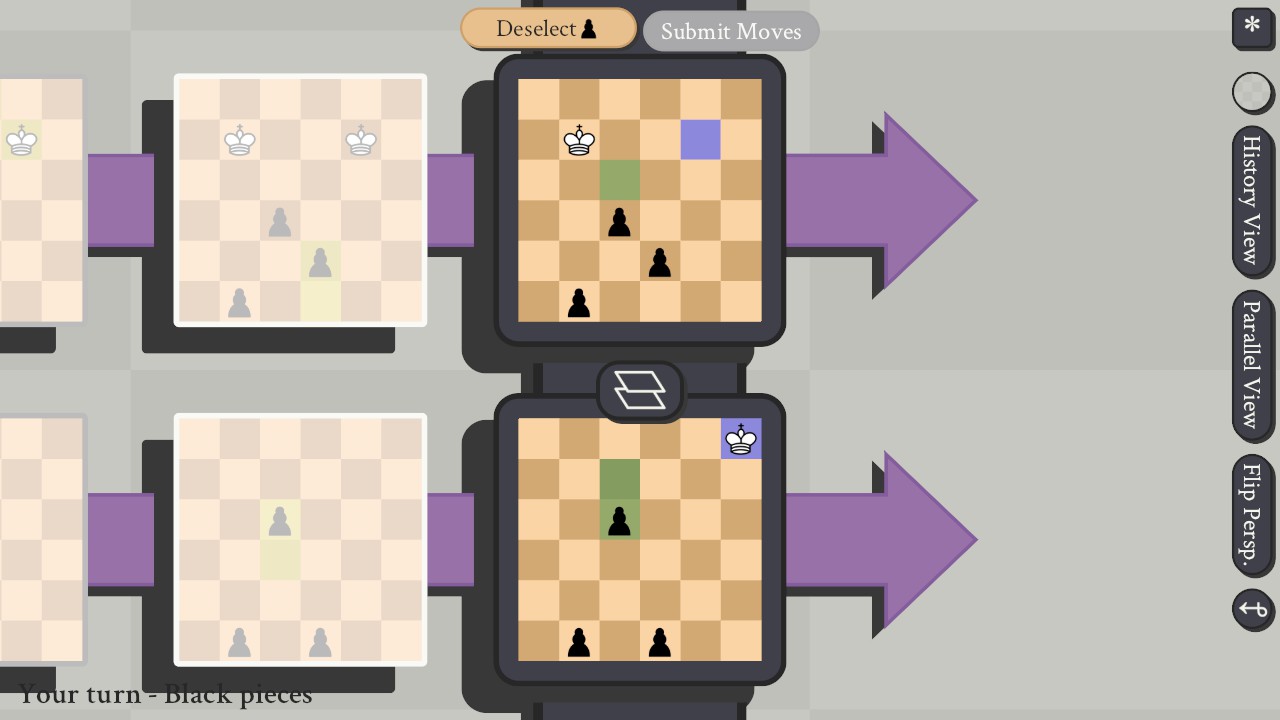 Note that they still do not move from their relative space that they started on. If you think of time travel in 5D chess as another direction, then moving through timelines would count as a pawn moving once like normally, except through time. No biggie. 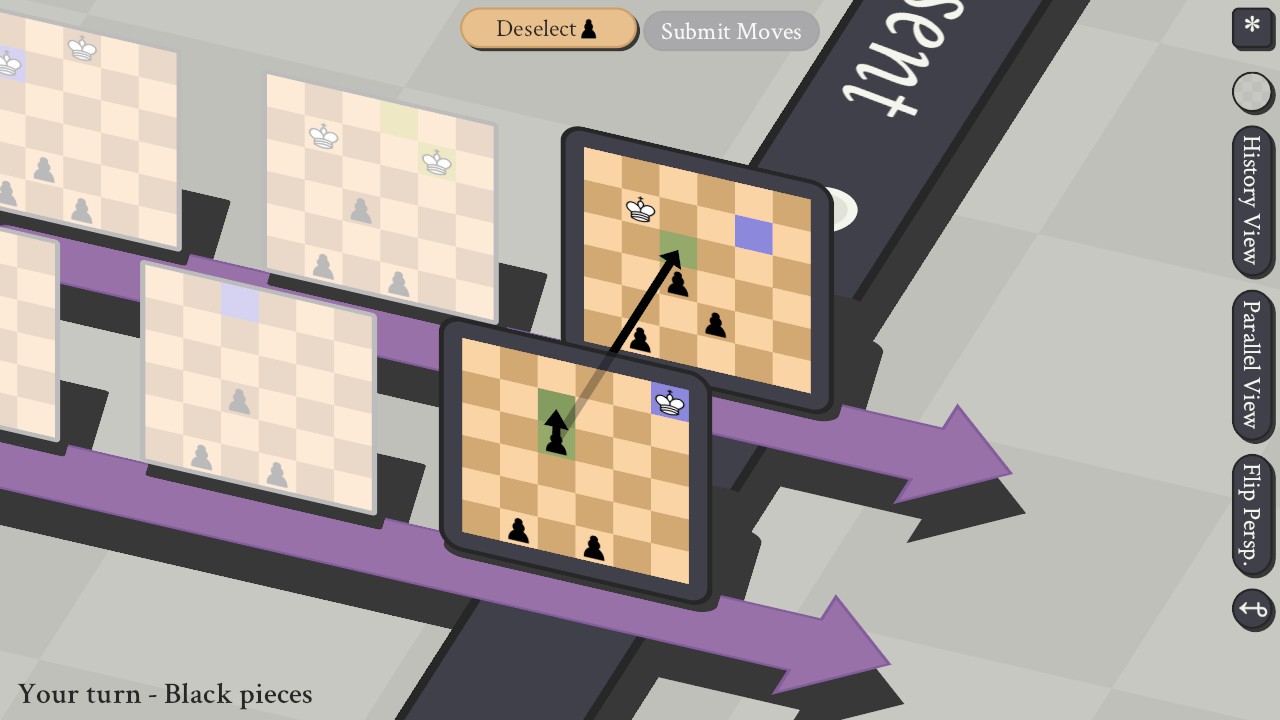 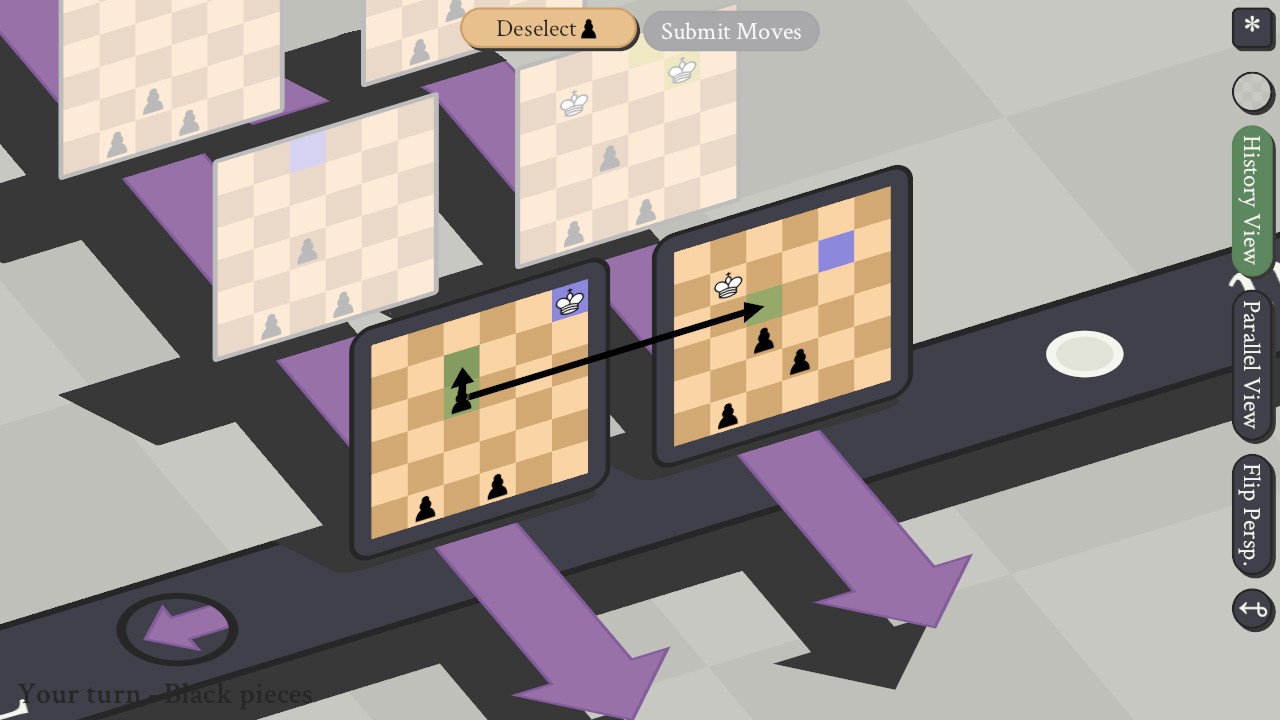 The way the Queen moves in 5D chess is not how you would expect, but will still hopefully make sense soon.


Moving in time and in between timelines is like a “spread” pattern that moves outward as you travel further in time and space. It can move an infinite amount of boards following its movement rules.

Starting at the nearest time jump, you can move to all of the adjacent squares next to its relative space:


[The transparent Queen is the Queen’s relative space] 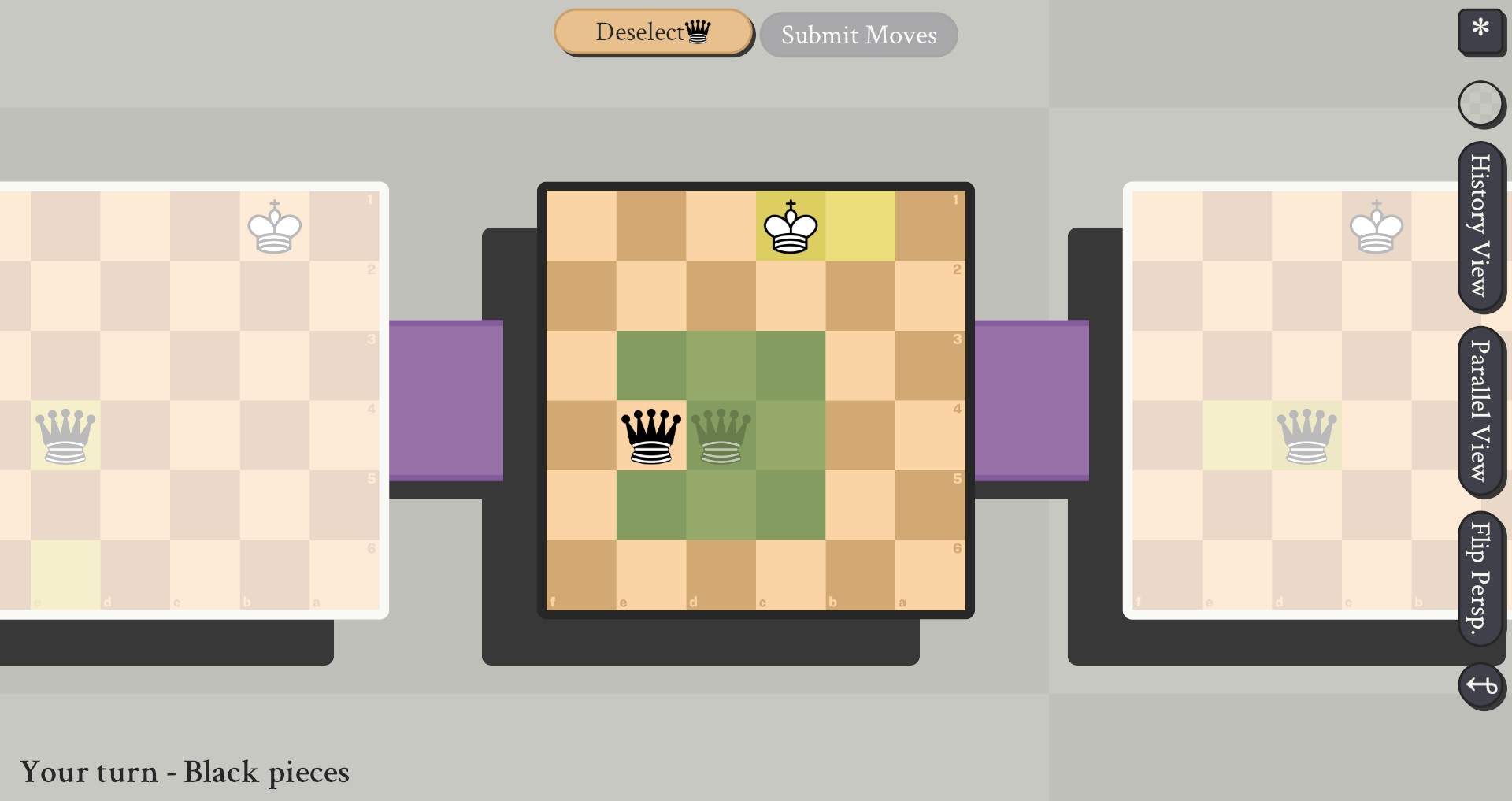 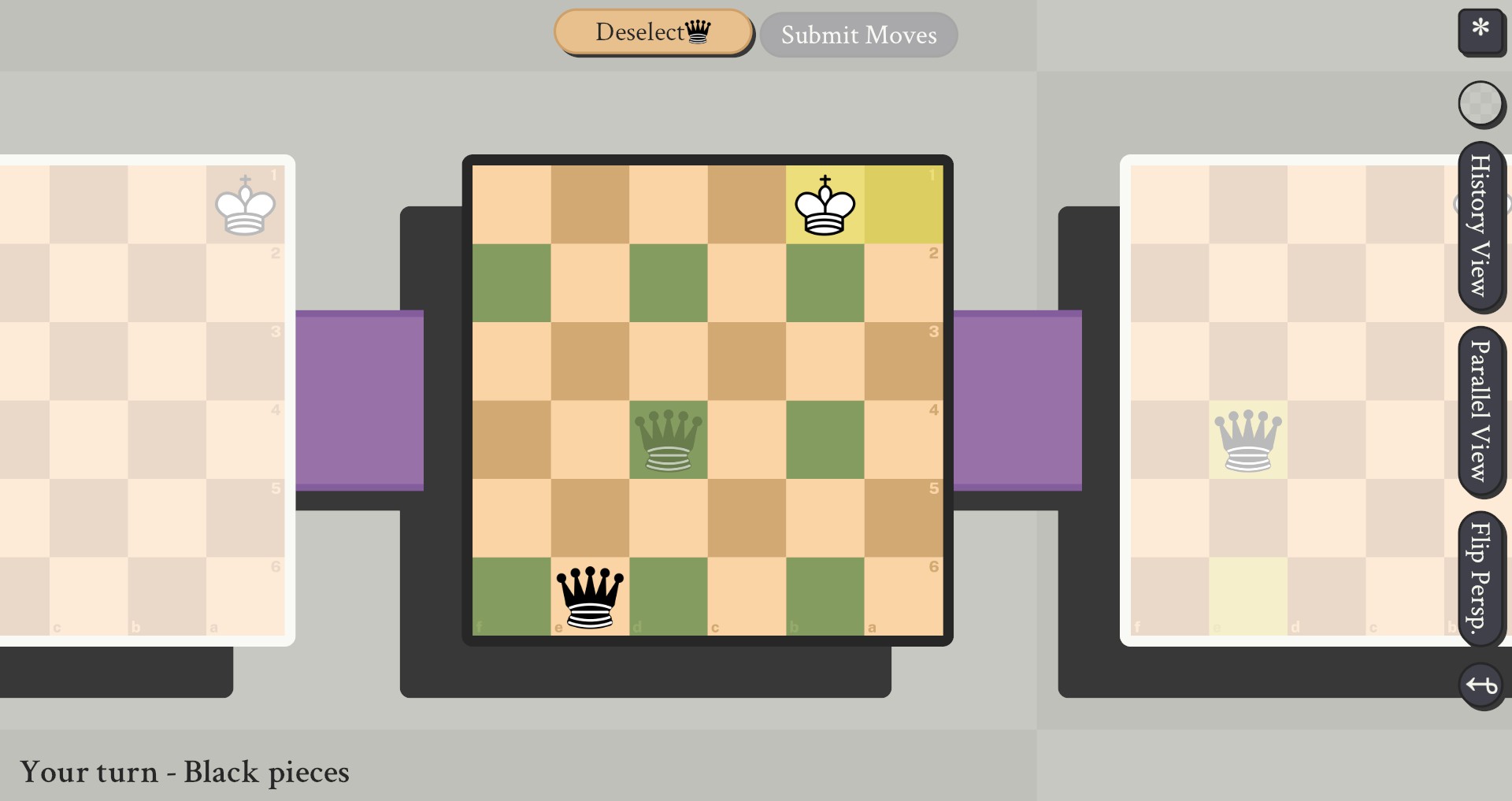 
You can visualise it with this: 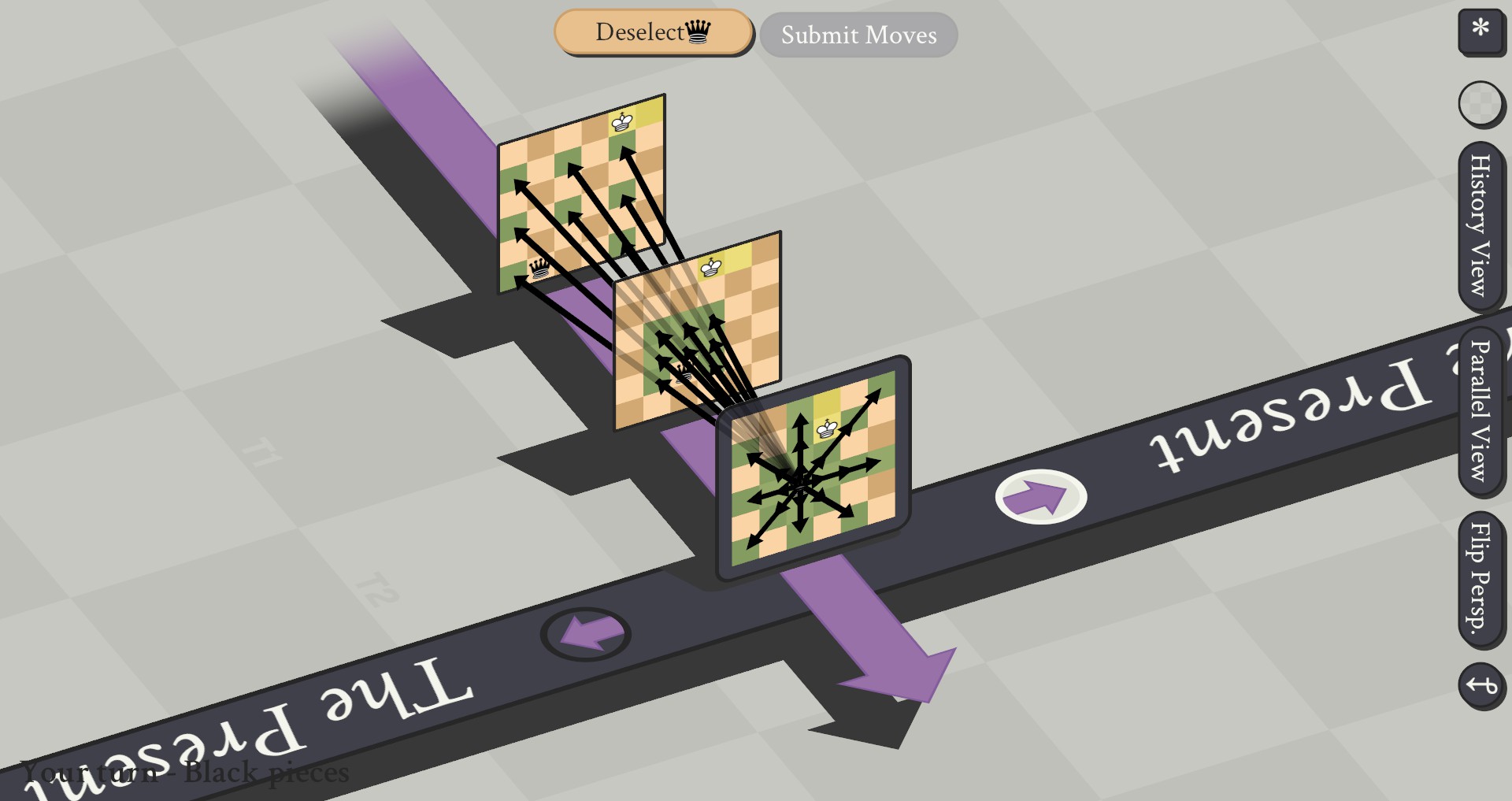 The same rules apply to moving in space (timeline jumping) as well. 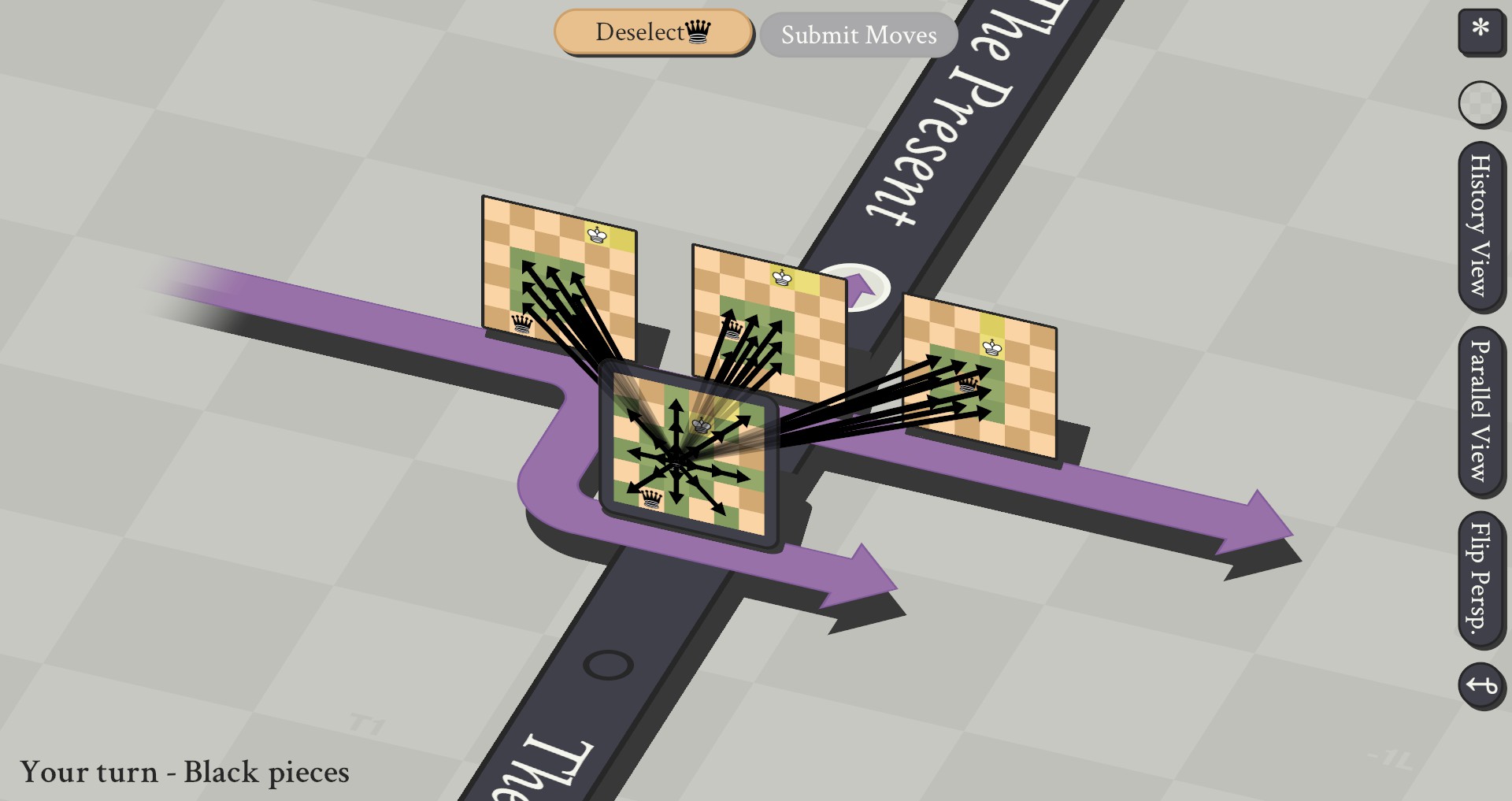 This one is simple.


The king moves through time the exact same as the Queen, except only one board at a time.

To refresh your memory from two seconds ago,

All adjacent squares to the King’s relative space will be available when time travelling. 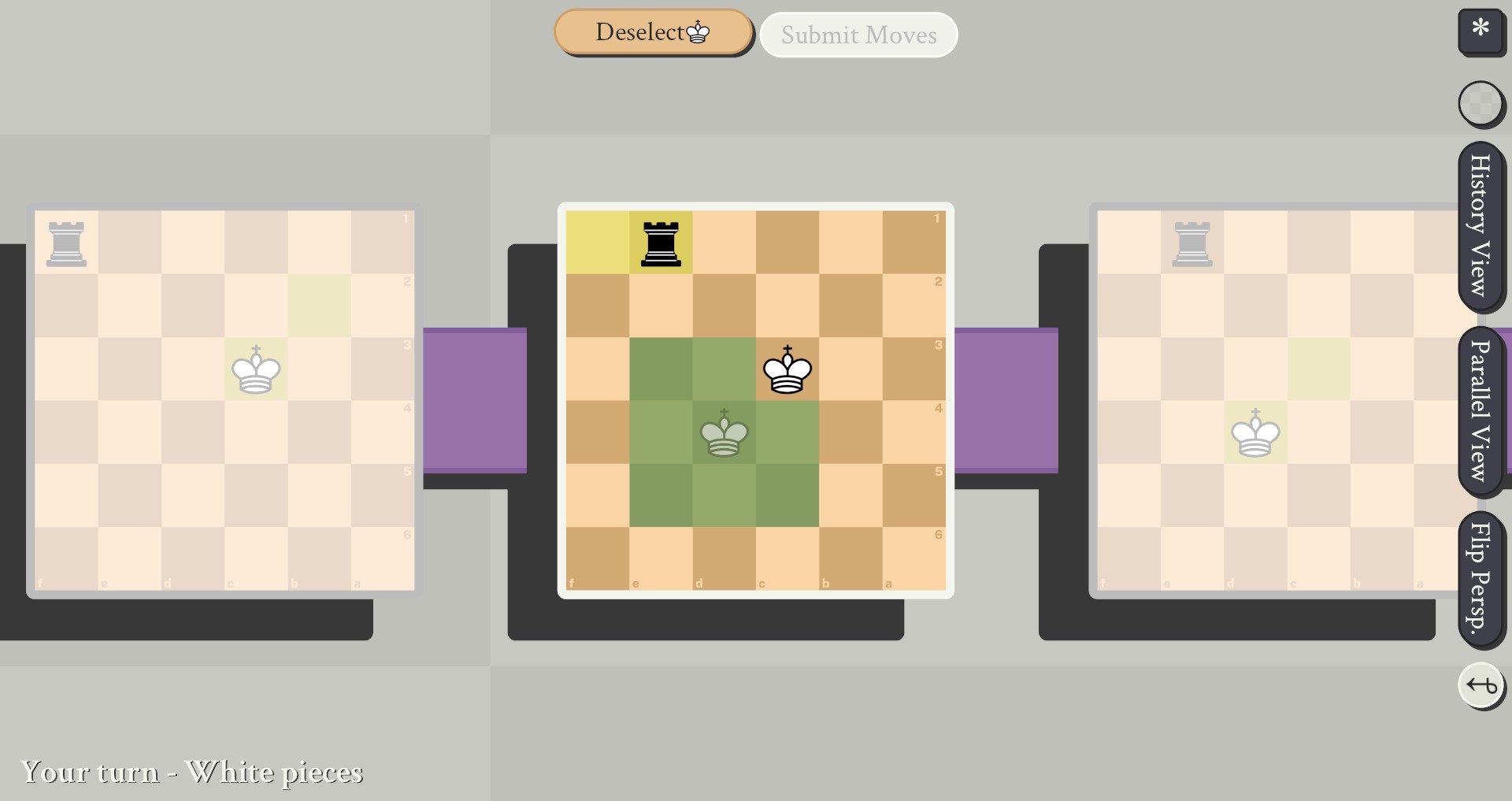 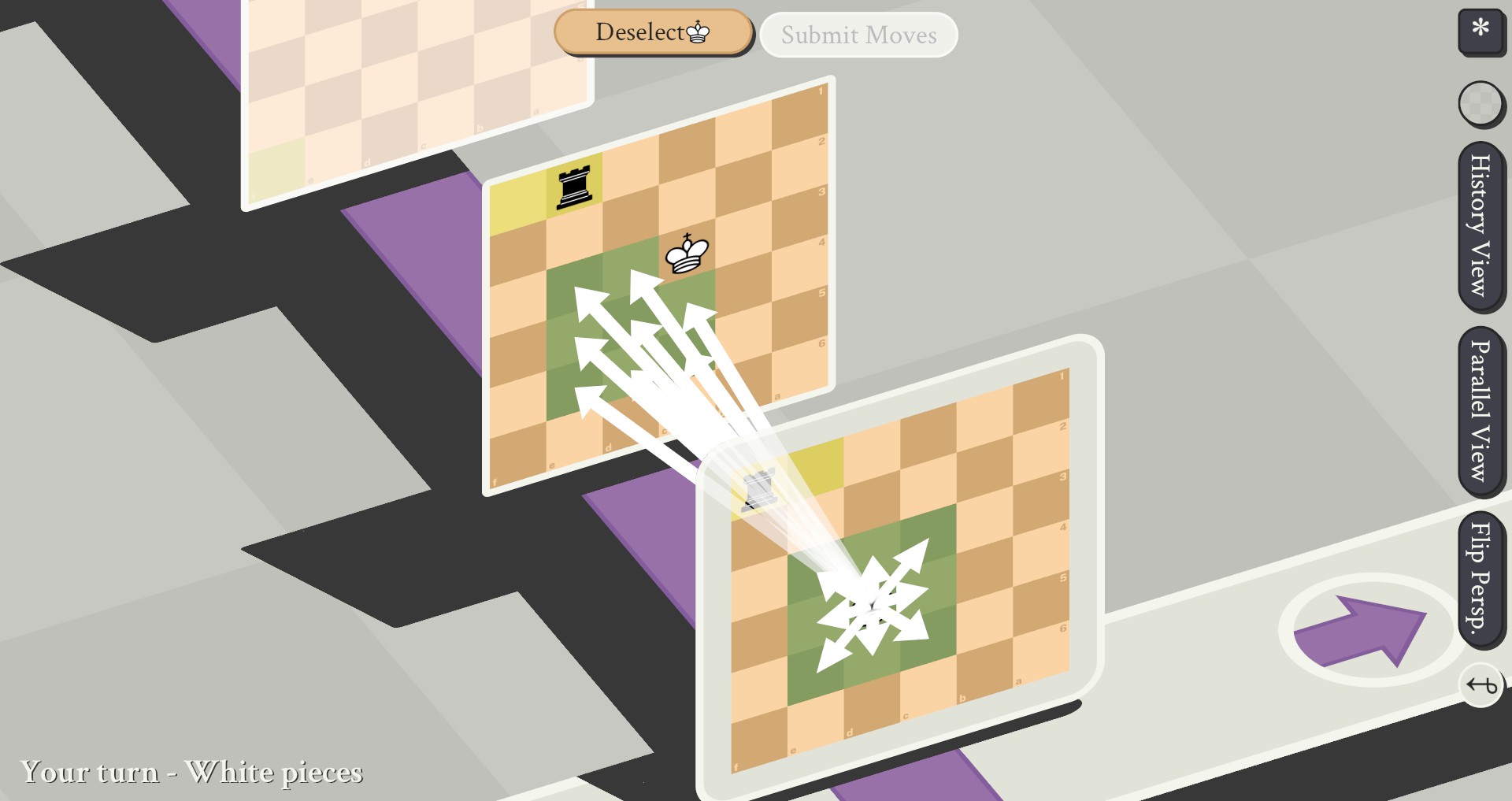 The spread from the Queen’s travelling also applies to this one as well.

As opposed to only moving diagonally, the bishop can only move laterally (up-down, left-right) along the board when travelling.

It will start with all of the lateral adjacent squares to the bishop, spreading as you travel further in time.

It can move any number of boards, laterally AND diagonally. 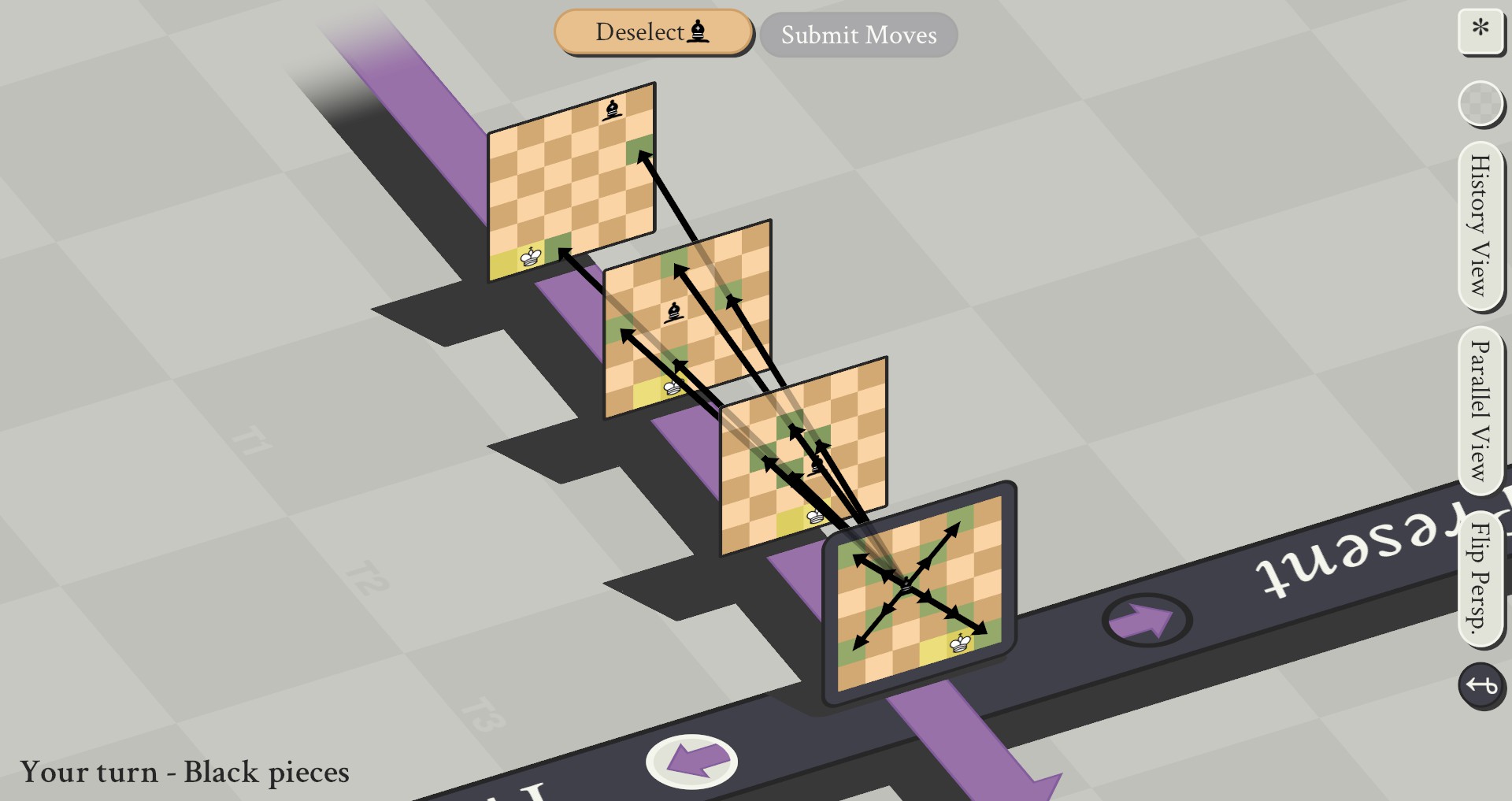 Last but not least (complicated) is the knight.


The knight draws heavily from its style of moving two squares in one direction, and one square in another.

Thinking of time as a direction makes this one much easier to understand.


Pay attention to this as you read onto the next part(s). 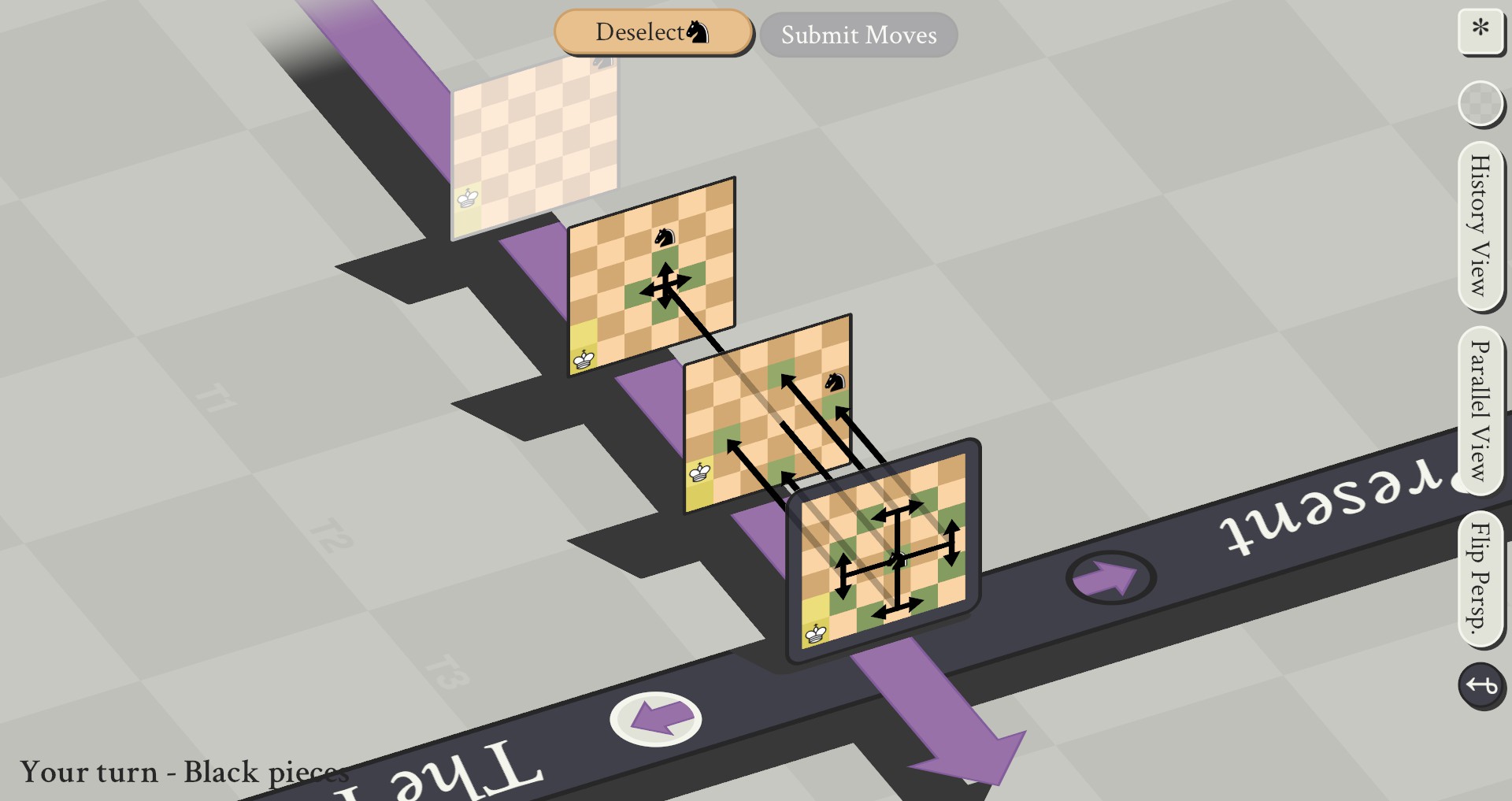 
If the knight moves two directions on a board and one direction in time, you will move as if you had just moved two spots forward. 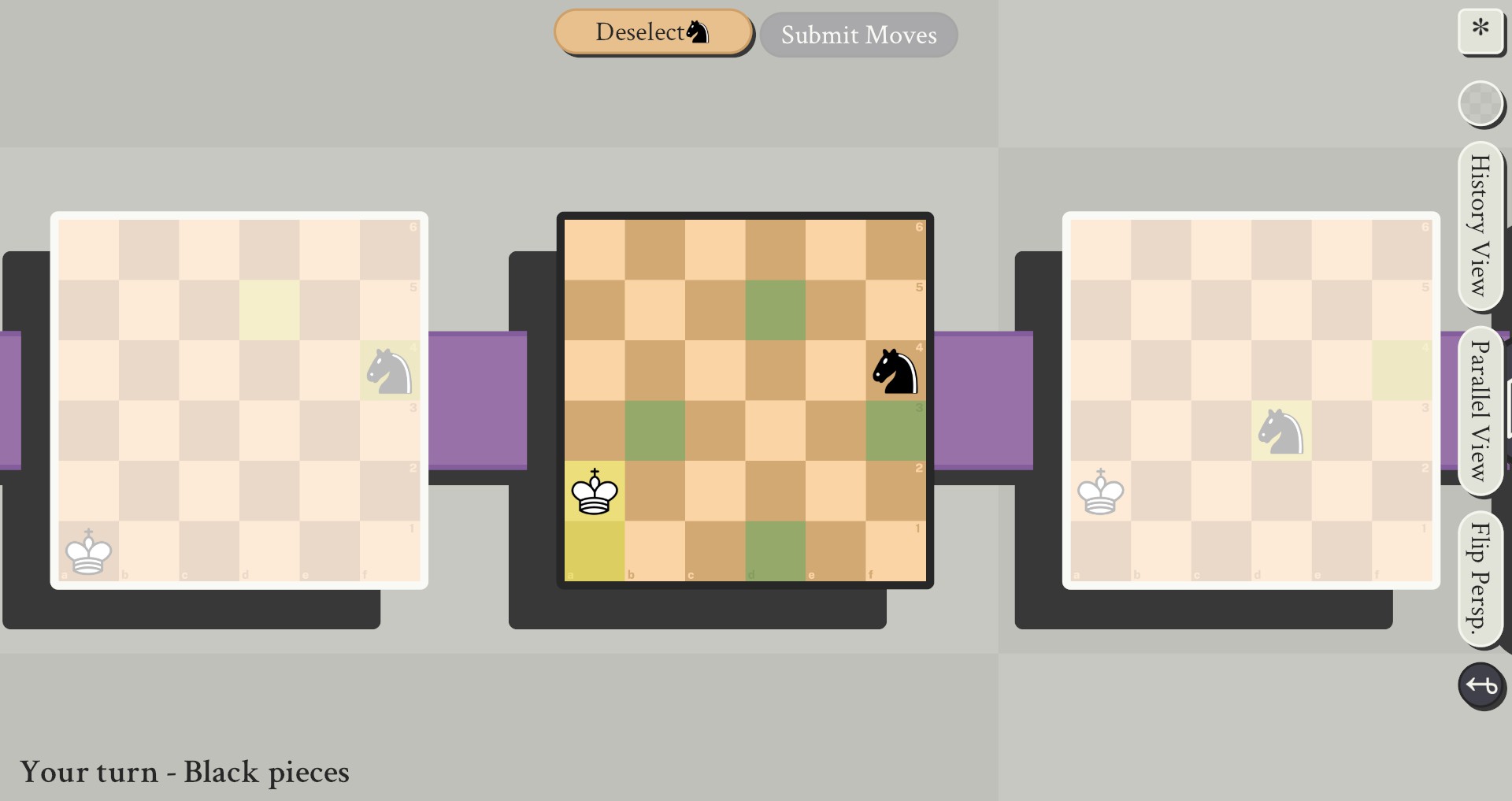 
If the knight moves one direction on a board and two directions in time, you will move as if you had move one spot forward. (All lateral adjacent squares.) 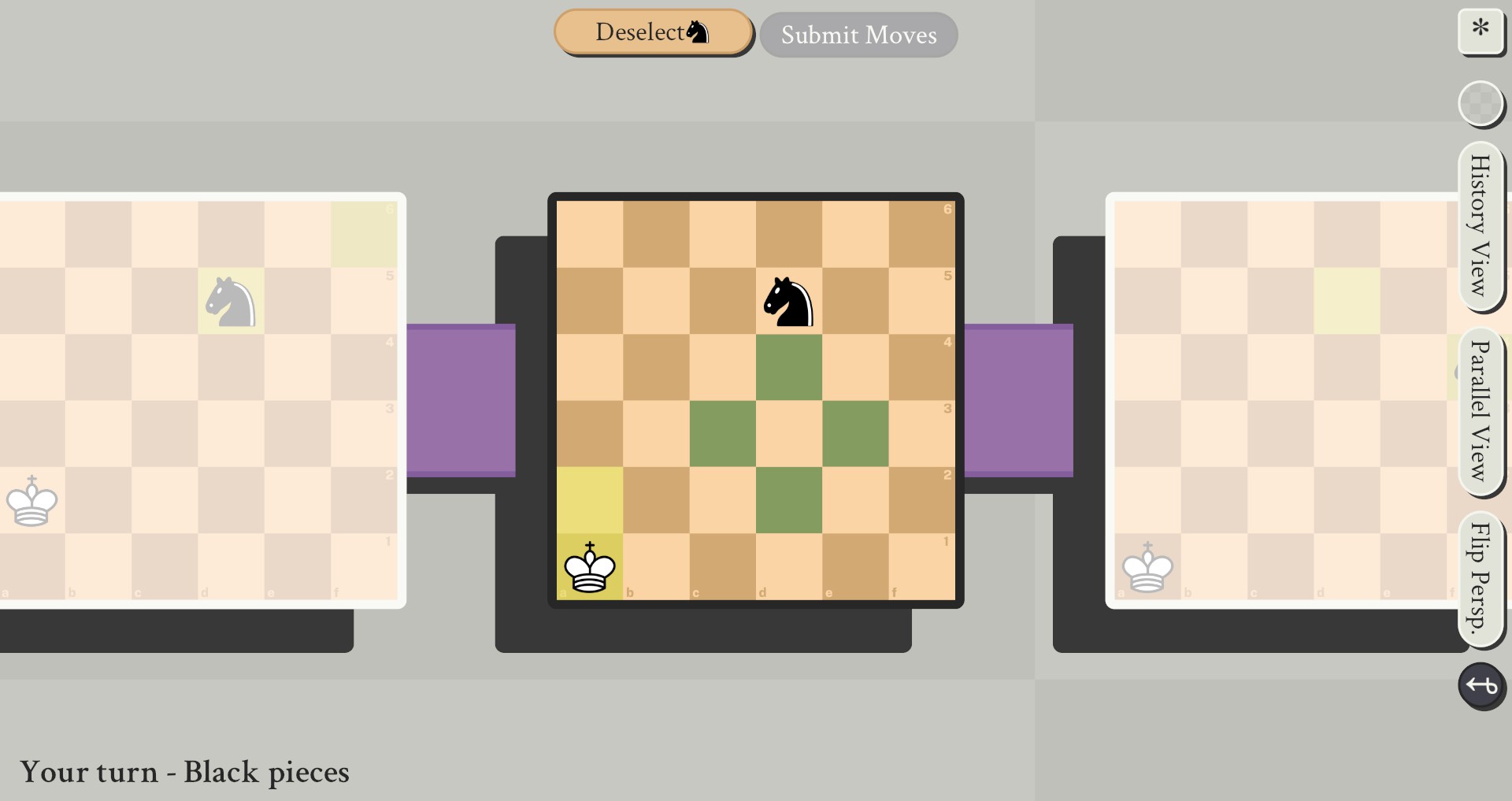 
Look back at the first image to understand better how it looks in the game.

Hope this helped, thanks for reading!

If you still do not understand anything about piece movement feel free to comment and I’ll try to clear up any misconceptions you may have about 5D chess.

Here we come to an end for 5D Chess With Multiverse Time Travel Tips on how to move through time hope you enjoy it. If you think we forget something to include or we should make an update to the post let us know via comment, and we will fix it asap! Thanks and have a great day!